Waking up to sunrises in different destinations are priceless moment. Each sunrise is unique and holds special memories for us. I asked 17 travel bloggers to tell us about their special sunrises from around the world.

Spacial sunrises from around the world

“This Sunrise from Sunrise Point, Hampi in Karnataka will always be special to me, since, me and my friends, ran around 3 km and climbed from on top, which wasn’t easy, just to capture the mesmerising sunrise on the Vijaynagar Empire.”

Hrishi & Anushka from Roam on ur own 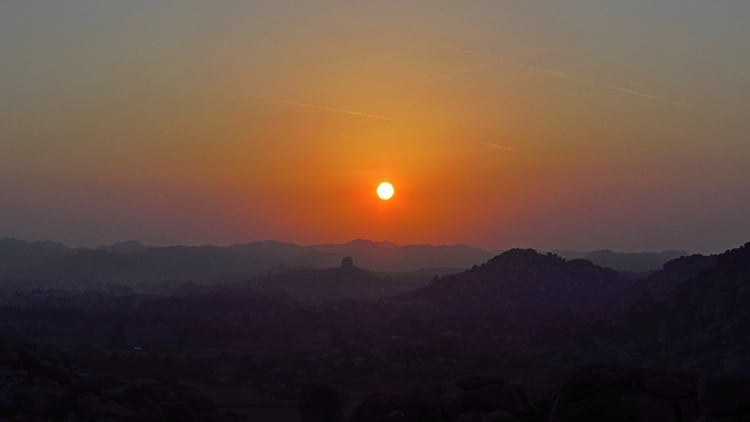 “While camping on the edge of the Ngorongoro Crater in Tanzania I decided to wake up early to watch the sunrise. What I witnessed was nothing short of breathtaking. Snuggled up inside my hoodie and scarf, I sat alone, mesmerized by the changing horizon before me, and watched as the African sky changed from an abyss of black and midnight blue to a bright mix of amethyst and tangerine orange, and as the sun began to rise, spears of light pierced through the clouds. And at that moment, I thought to myself that there is always hope over a new horizon.”

Ali from Travel With My Art 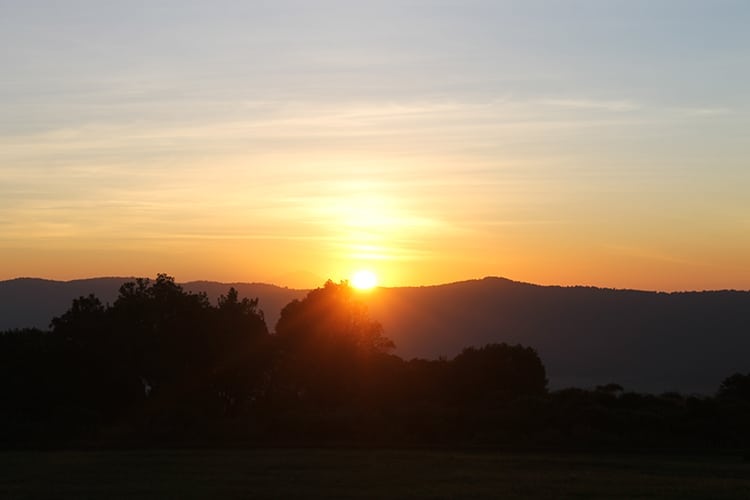 Sunrise at the Ngorongoro Crater

Kala Patthar at Everest Base Camp

“4 am, the alarm rang and we had to out of bed to catch the sunrise. But why was this so special? I was waiting for the sunrise behind Mt. Everest. I was at Gorekshep, the last frontier before the Everest Base Camp. Kala Patthar is where I needed to climb up to watch this special sunrise. The heavy gale-force winds were terrible, and there was no end in sight for the thick clouds that morning. Just then the wind died, and the Sun began to shine through the clouds. And what a sight that was. Truly special!” 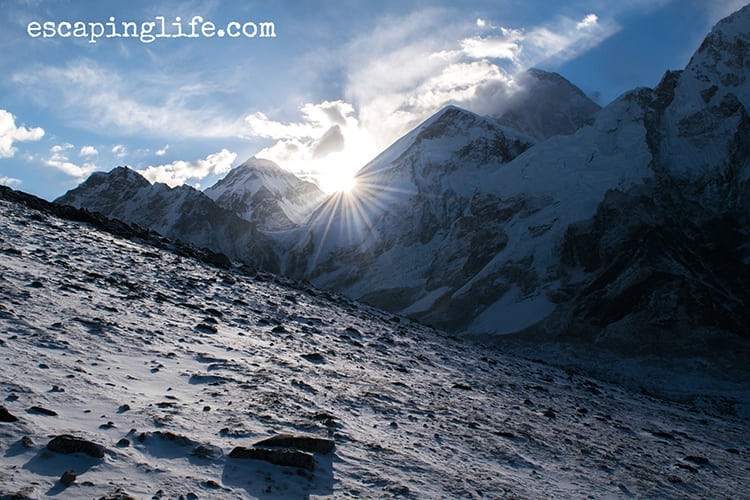 “There is something so beautiful about a subtle sunrise, yet it’s usually ignored on non-vacay days as it marks the rush-hour associated before heading to work. On a crazy day, I like to hold back for a minute, stop and watch the sun rise. This picture has the same backdrop of Kota Bharu, Malaysia (as during sunset). It’s nice to watch how the city shies away in yellows as it receives the first rays of the sun. Check out the contrast.” 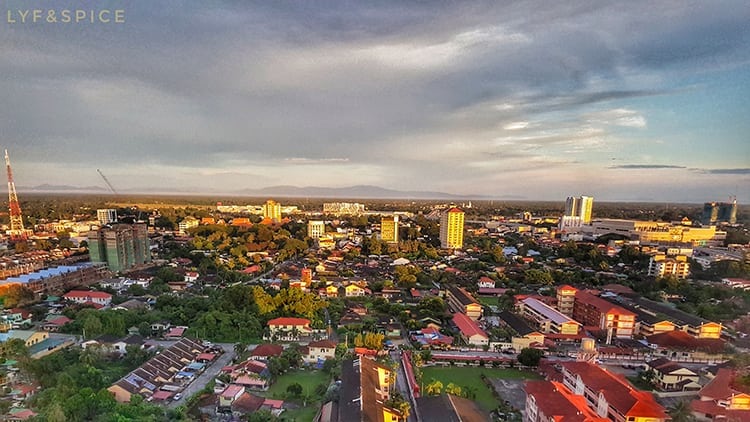 “The sunrise at Uluru in Australia’s rural Red Centre was simply magical. The National Park comes to light in the brightest of colours with the stark red tones of Uluru contrasting against the white grass surrounding it. It feels so special to be experiencing this sunrise over such a scary landmark and remote part of Central Australia.”

Emma from A Make Believe World 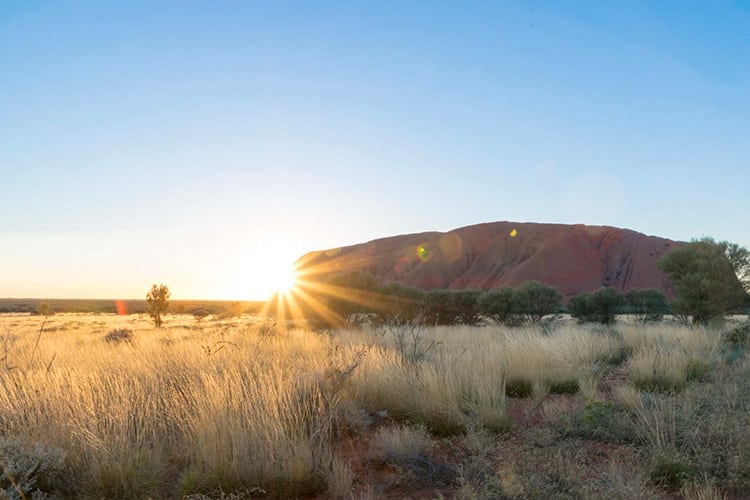 “This is my favourite sunrise from Low Isles, North Queensland, Australia. Not only did we get to see gorgeous skies above the Great Barrier Reef, but we could also spot turtles and sharks swimming in the shallows. Visitors are not usually allowed on the island during sunrise but we were staying as volunteers. It was a one-of-a-kind opportunity that I am very grateful we were able to experience!” 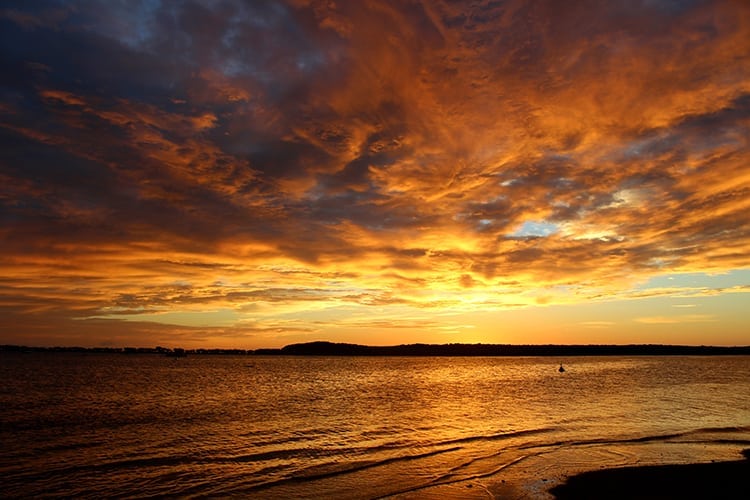 “I am not an early morning person at all! But when you’re in Cappadocia, you will miss the most beautiful sight if you do not wake up to catch the thousands of hot air balloons that take over the sky at sunrise. I did not want to be in a balloon myself because I wanted to get that perfect picture, from a vantage point. My cave hotel in the city had a lovely terrace and they organised an early morning coffee (the temperature was 5 degrees C) with a blanket to enjoy this amazing view. It was such a lovely feeling to watch the balloons slowly rise, one by one, and within 30 minutes, the entire sky is dominated by their presence.” 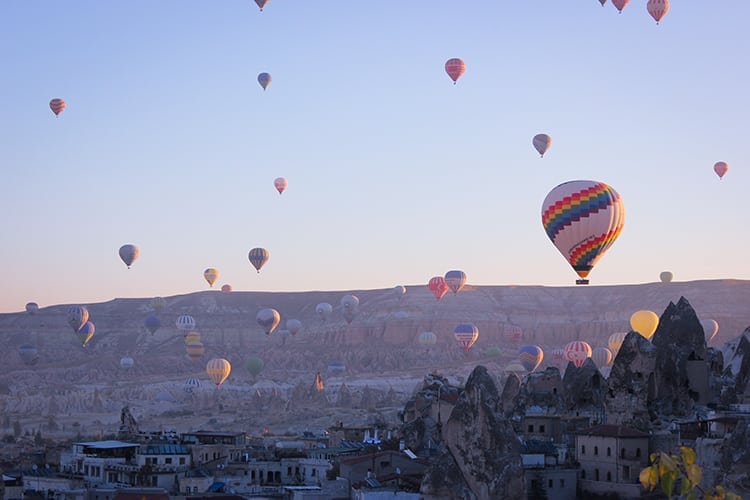 “We captured this peaceful sunrise from the rooftop of the apartment we were staying at in Havana, Cuba. The neighbourhood of Miramar was a great place to stay & really get to know the locals. We particularly loved this time of day as getting up early to watch the sun come up, whilst enjoying some Cuban coffee meant that we could watch the whole neighbourhood start their day. It was a refreshing change to witness in a capital city with such a laid-back pace of life. People chatting with each other on doorsteps, the local fruit & veg guy wheeling his cart & shouting out to us every morning, children playing in the street before they started school. It really did feel as though we had travelled back to another time & was a truly magical experience.”

Kelly & Adam from The Wilder Route 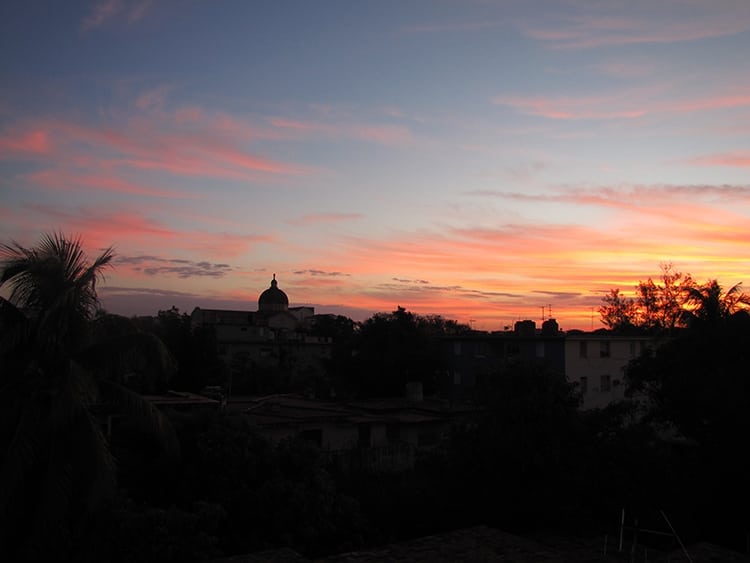 “Haleakala is the third tallest volcano in the Hawaiian Islands and is well known for its epic sunrise. We arrived at the top of the volcano around 4:30 am and it was cold! Already travellers were setting up chairs and cameras in anticipation of the once-in-a-lifetime event. We found seats up front and huddled in our blankets. Then, under a sky full of stars, we watched as the sun slowly peeked above the clouds. The stars gradually disappeared leaving nothing but glorious sunshine. It was absolutely breathtaking! What made this sunrise even more spectacular? We were on our honeymoon.”

Tim & Marcella from A World With You 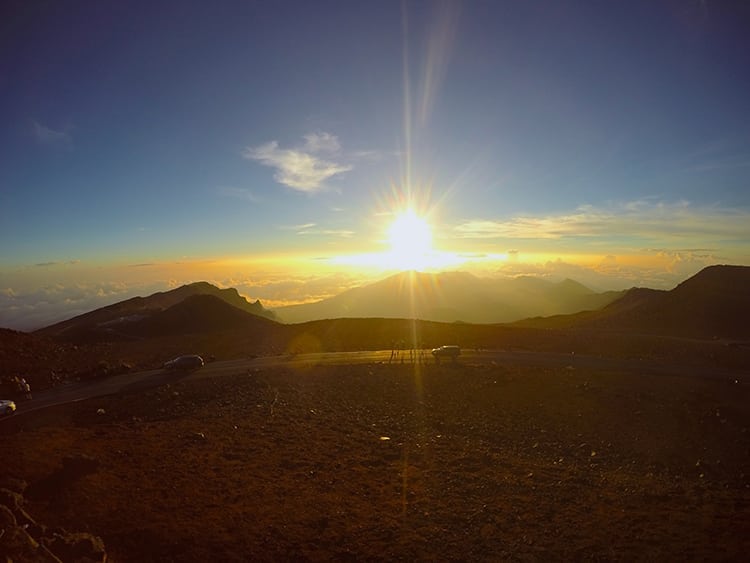 “The first Christmas I ever spent with my boyfriend was in Madagascar. We had been together almost a year and a half, but this was the first time we were spending Christmas just the two of us. Our tour company booked the tour in a way that allowed us to spend Christmas Eve watching the sunset on the Avenue of Baobabs and waking up Christmas morning to watch the sunrise there as well. There was no one else on the street watching the sunrise but me and my boyfriend (and our local tour guide and driver). And it was magical.”

Sara from The Life of a Solivagant 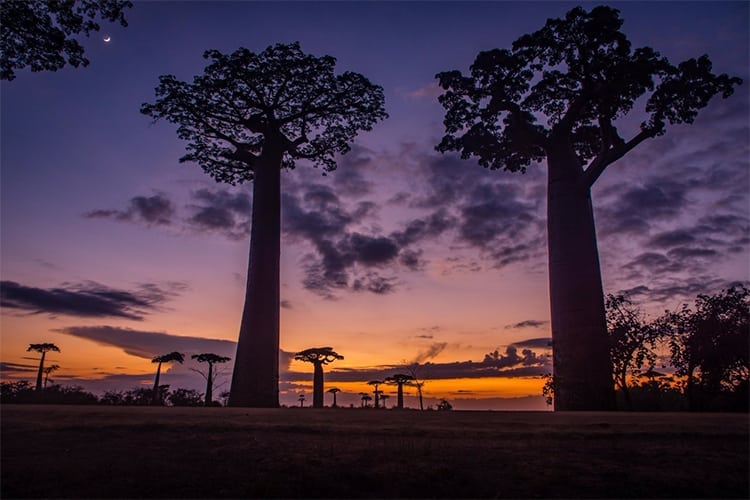 “I am addicted to sunrises and sunsets.  I chase them everywhere. And the one of Borobudur in Jakarta is definitely in my top three ever! It was also the earliest I had to wake up for sunrise so far: 4AM!! And it was all worth it! Climbing up the giant Buddhist temple in the pitch dark of the very early morning hours and listening to the call for prayers at the mosques and temples nearby was a surreal experience.  And when the sun started rising we were treated to this unparalleled view!” 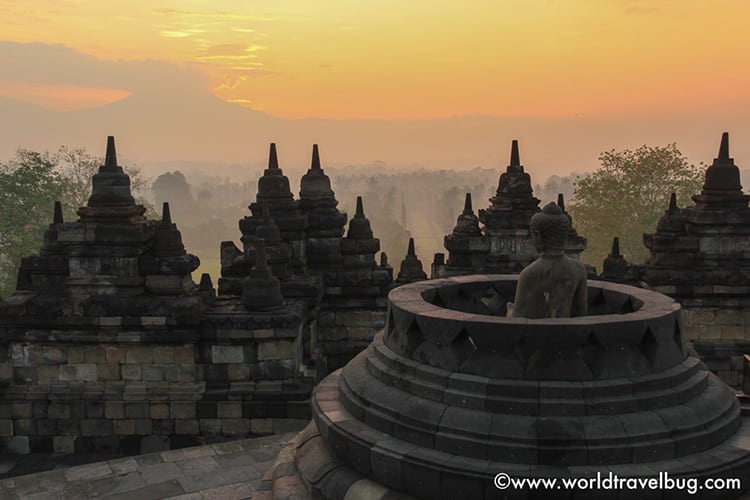 Sunrise at Borobudur in Jakarta

“As a kid, I never got up early enough to see the sunrise or even took the time to appreciate them. Now that I am older and get up at the crack of dawn I am very appreciative of them. I have learned that each sunrise and sunset is different, just as every day is a new different day. This sunrise is special to me because it was taken on a day I was flying home to Kansas. I did not see it till I decided to walk around and then I found this masterpiece. This sunrise taught me to always be on the lookout for something great, even when you are tired. This made me thankful for my vision, it includes two things I am also now thankful for sunrises and airplanes.”

Ariel from A Different Frame of Mind 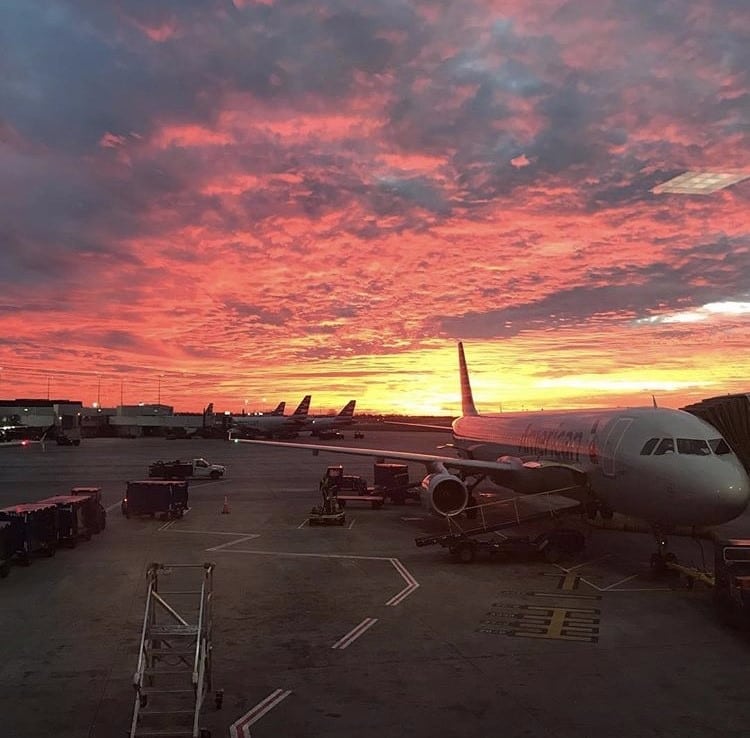 Sunrise at Kansas Airport in Missouri

“We travelled to Agra in India to see the stunning Taj Mahal.  Our first view was for a crowded sunset.  In the morning we returned before sunrise.  We watched the Taj Mahal light up and the details take form as the mist cleared.  The stone seemed to heat up and glow.  It was interesting to see the colour variances at different times of day.  Definitely plan to see the Taj Mahal at sunset and sunrise.”

“I biked up Chopta in the Himalayas with a couchsurfer I met in Delhi. It took me a 9-hour night bus to get to his city, 3 days for us to bike into the mountains, and 5 hours of hiking to reach the peak. During the trip, I managed to lose my passport, lose my phone, get lost, and into a motorcycle accident. However, two different groups of villagers found my belongings and returned everything days after. Despite having to push the bike to the nearest service shop (in the Himalayas!), we managed to finish our journey and catch the sunrise reflecting off the snow-covered mountain peak. It was absolutely amazing.”

Daisy from Beyond My Border 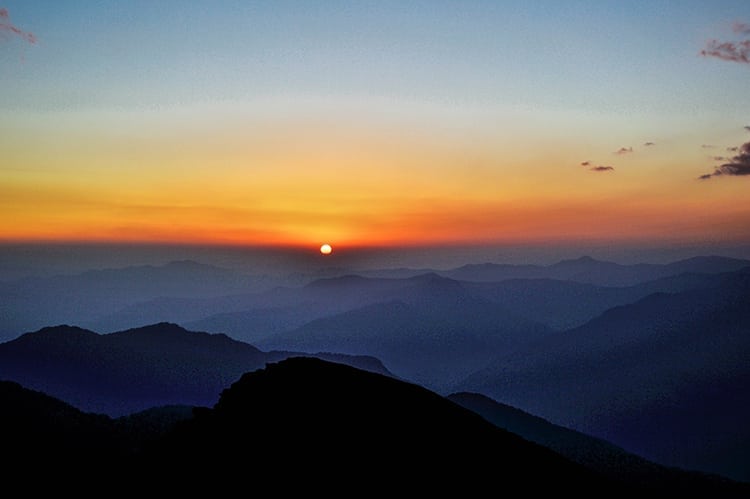 Sunrise in Chopta in the Himalayas

“Flying from East to West, I suffer terribly with jet lag. My eyes pop open at “oh my goodness” o’clock and I have to lie quietly in bed until my other half wakes up. However, on our trip to Miami with his family in tow, I was not alone. The whole party woke up with the dawn, and so I suggested that we dash down to Miami Beach and watch the sunrise. It was spectacular. It was wonderful to share the moment for once l, and in such a blaze of glory.” 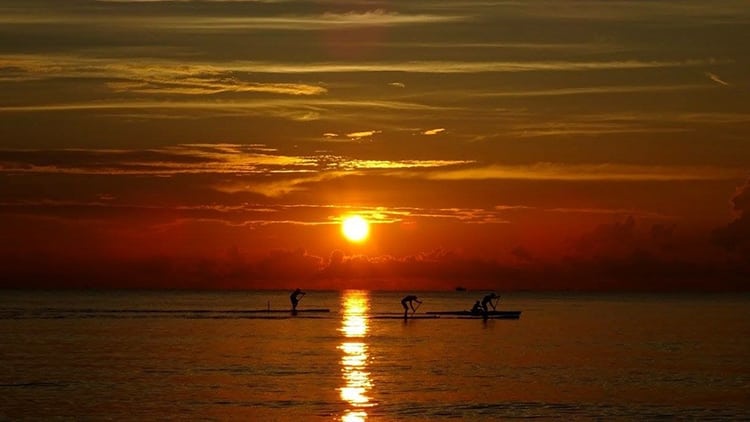 “While traveling the Trans-Mongolian Railway from St. Petersburg to Beijing, I stopped in Mongolia to visit the Gobi Desert with 4 other women I met on the Lonely Planet Thorntree.  We had 7 days in the Gobi, driving around in an old Soviet van.  My fondest memory is waking up early to watch the sunrise at the Khongoryn Els Sand Dunes.  The dunes changed color from purple and pink to orange to their normal tan as the sun rose opposite the dunes.  To add to the ambiance, there was a temporary pond in the middle of the desert that provided amazing reflections on its glass-like surface.”

Lisa from The Hot Flashpacker 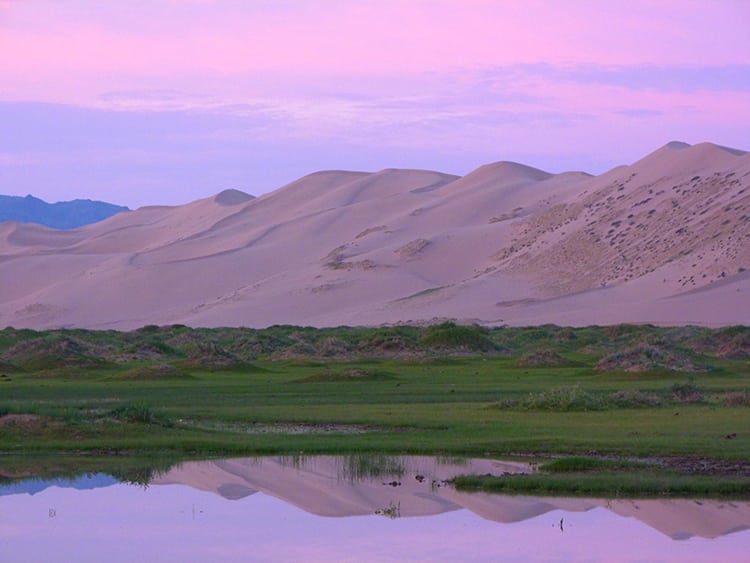 “The most magical sunrise we’ve seen on our 4-year trip around the world was sunrise at Angkor Wat. Watching the sun clip over the temples followed by an amazing reflection in the pond. Nothing will ever compare. It does call for an early morning to ensure you get a good viewing spot but it’s totally worth it.”

Hannah from Getting Stamped 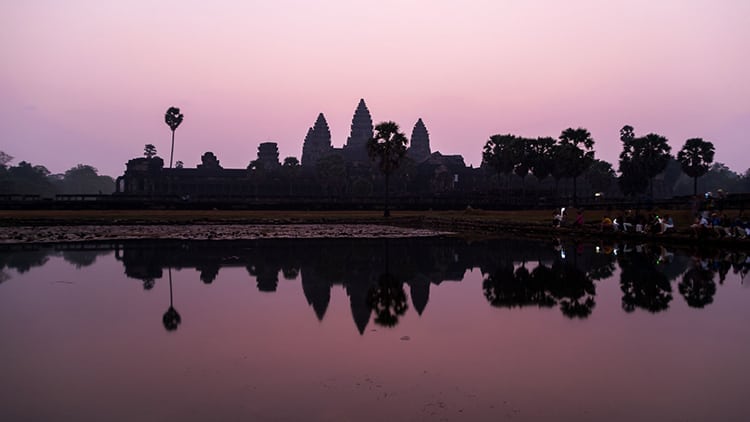 Sunrise at Angkor Wat in Cambodia

If you loved these beautiful sunrises, check out 17 Special Sunsets from Around the World 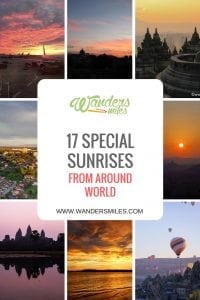 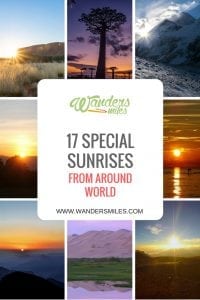 Now these are sunrises worth getting up for!

It’s amazing to see the first rays of the sun from across the planet. Thanks for the feature. Cheers!!

Looking through all these sunsets I find myself having severe sunset wanderlust! Simply amazing, all of them!