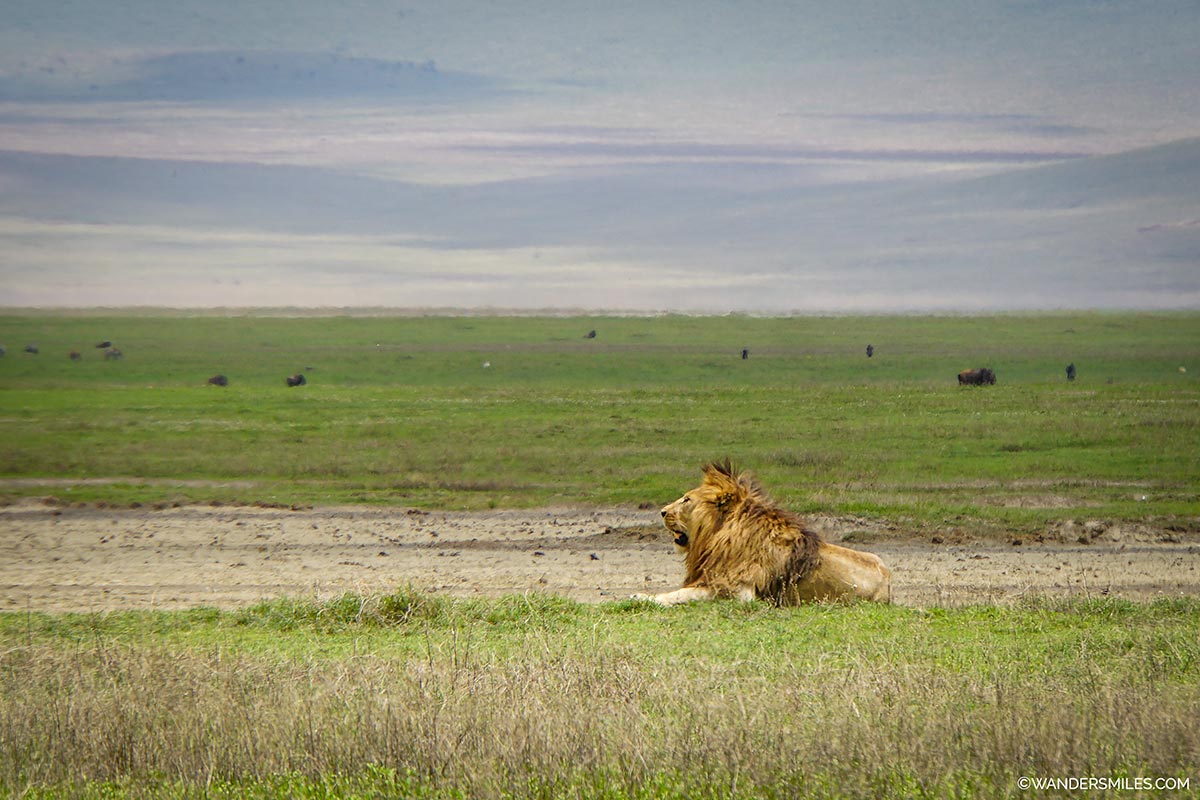 On a trip to Tanzania, you have to visit the magnificent Ngorongoro Conservation area in Southern Serengeti. The Ngorongoro Crater is the largest inactive caldera volcano that remains unfilled and has been voted one of the Seven Natural Wonders of Africa.

Often referred to as Africa’s Garden of Eden, the Ngorongoro Crater floor is dominated by open grassland with a patch of woodland known as Lerai Forest. The crater covers an area of 304 sq. km. and its diameter is 19.5km, while its depth is 630m and is densely populated with over 25,000 animals. It’s a no-brainer… let’s go on safari in Ngorongoro Crater!

GUIDE TO SAFARI IN NGORONGORO CRATER

As our guide went inside to pay for the tickets, the area by the car was awash with Vervet Monkeys grooming each other, babies hanging off their mums, and generally running around. Just a tiny taste of what was to come. Make sure you stop off at the viewing point too so you can look down into the crater and marvel at the stunning expanse of nature.

As you drive down into the floor of the crater, the zebras grazed at the side of the road with many, many more Vervet Monkeys playing in the grass and the Thomson and Grant Gazelles bounding around. You will see lots of Euphorbia trees as we entered the safari, they contain a sap that could render you blind, however, the Masai mix it with other ingredients as a medicinal potion for the stomach. 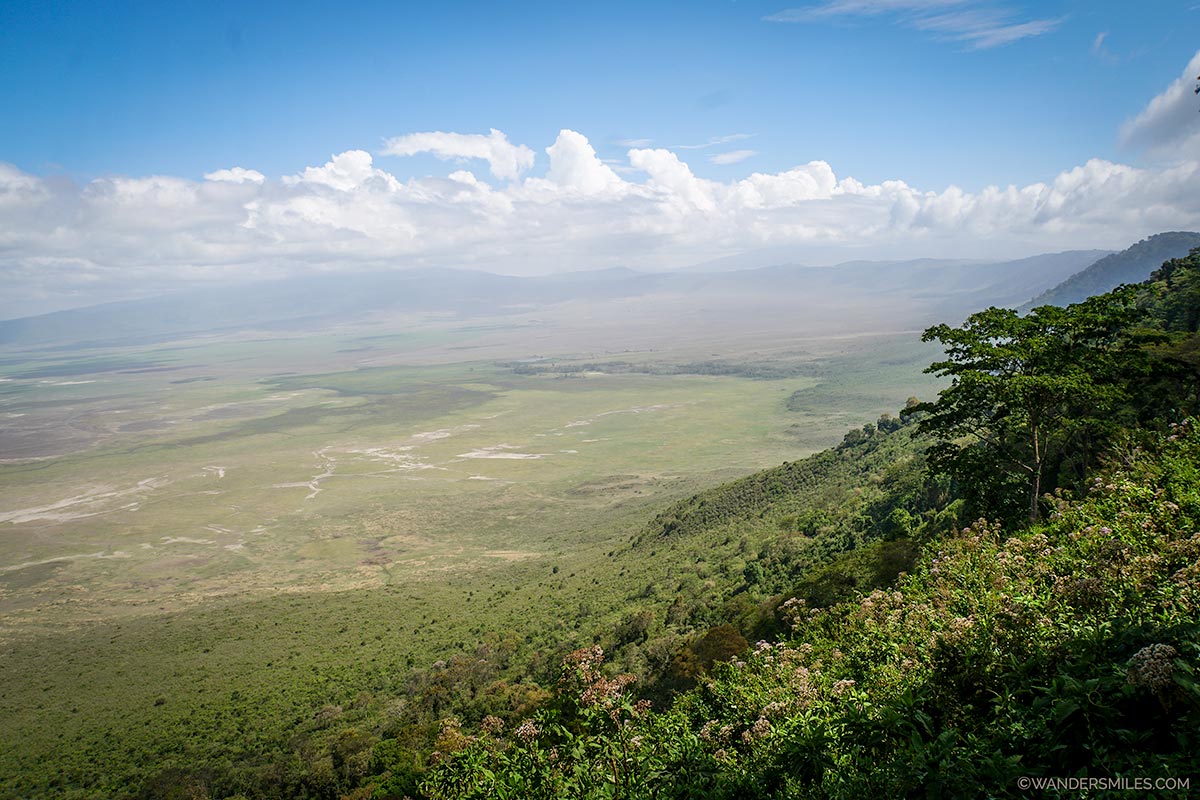 Views of the Ngorongoro Crater floor 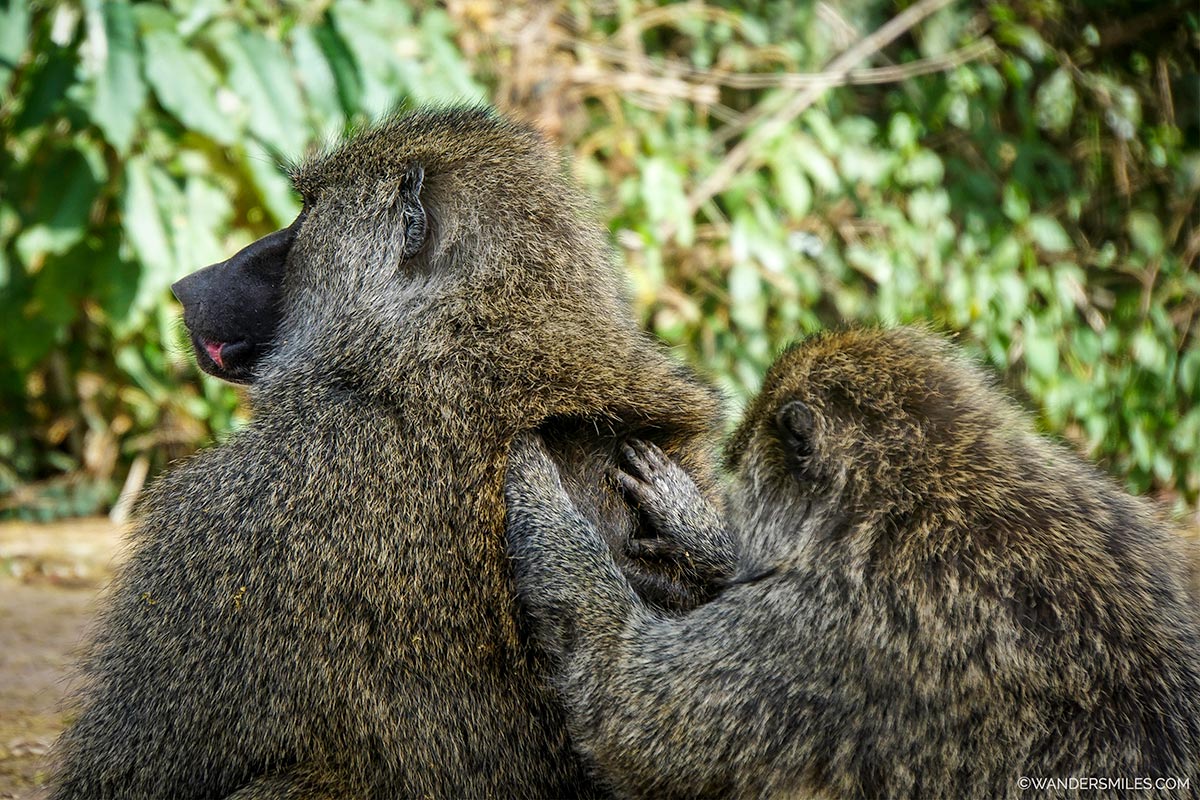 The Masai were tending to their flocks as we drove past so I asked the guide how the Masai population can live in harmony with lions in their own backyard. It is a part of the culture of the Maasai where a man has to kill a lion to be able to marry and be recognised as a man and a true warrior. The guide said the lions are afraid of the Masai because of this. Now, I’m not sure how valid this is considering the nature of the beast and some Masai do die in this hunting process. 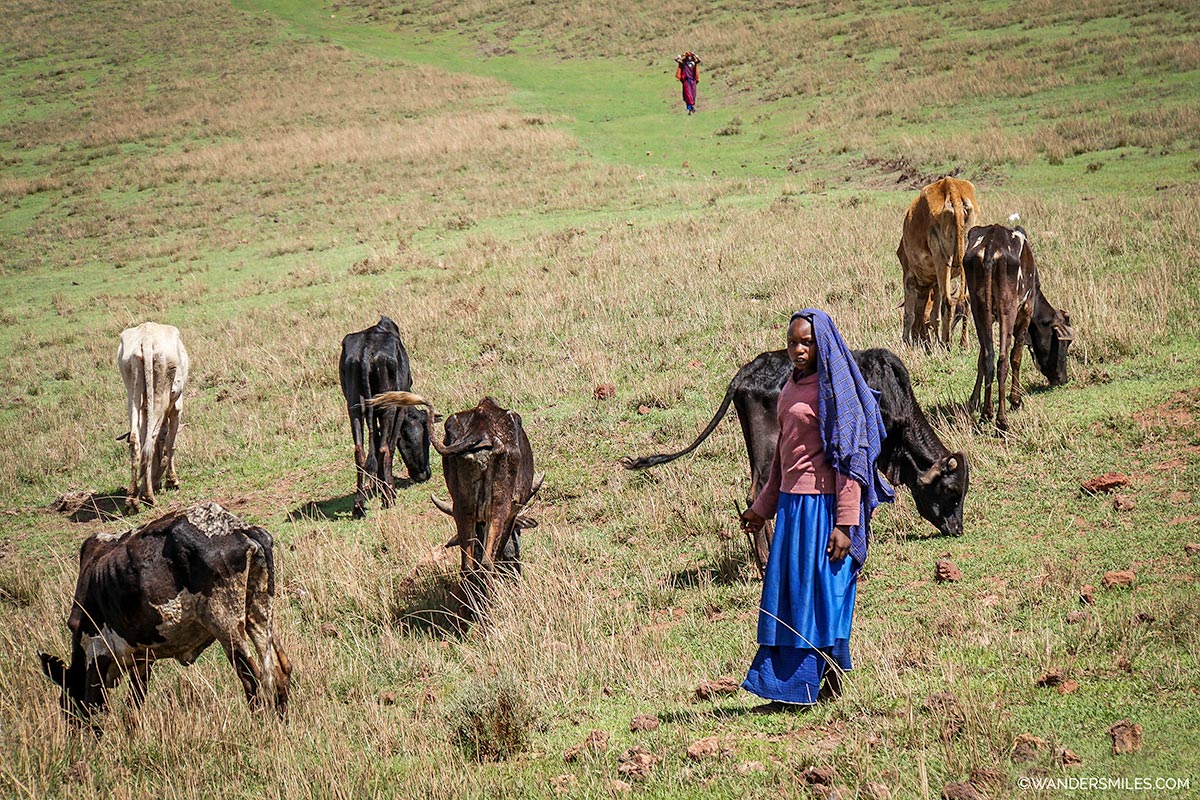 Masai woman with her cattle

Ngorongoro Crater is a UNESCO World Heritage site and is home to a population of about 25,000 large animals, mostly ungulates, alongside the highest density of mammalian predators in Africa including the biggest known population of lions. Lions are lazy creatures and rely on the lionesses to hunt. This was evident as we saw a lion chilling and yawning in the sun with two lionesses rolling around nearby.

At Ngorongoro, you will come across a range of endangered species, such as the Black Rhino, Wild Hunting Dog, and Golden Cat. We were lucky enough to see a Black Rhino but it was only picked up by super strong binoculars, unfortunately, my zoom lens was not badass enough to capture the moment. The males are solitary and aggressive creatures making it hard to increase the population.

The animal migration in the Serengeti is the largest on earth with over 1 million wildebeest, 72,000 zebras, and 350,000 Thompson and Grant gazelles making the move. The precise timing of the migration depends on the rainfall as the animals are in search of fresh grazing and water. 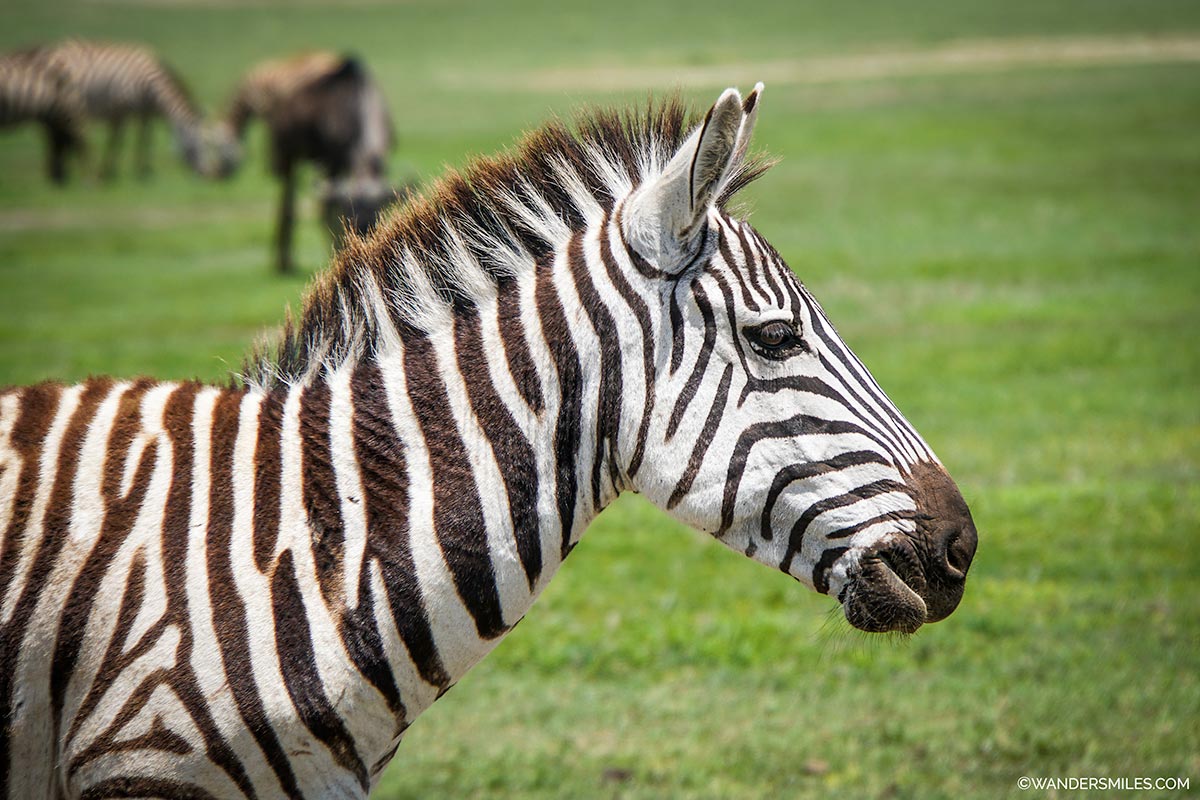 There was a hyena very close to the roadside laying down in the grass, he looked very cute looks can be deceiving as they will eat an entire animal, bones and all! Another fearless predator is the Golden Jackal who will eat anything, mainly smaller animals such as reptiles, mice, and birds, they are known for taking the newborns of the gazelles to their dens to be eaten. They’re not averse to finishing off the carcass after a lion has taken what they need from their hunt, however, if another animal dares to come along, the Jackal will bury the meat. 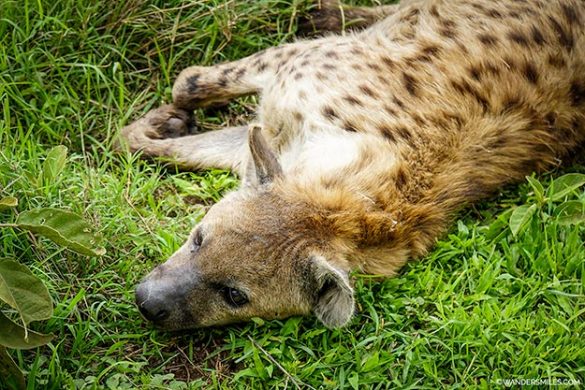 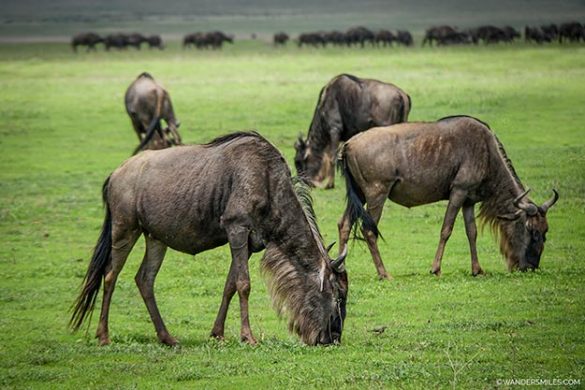 The crater covers an area of 304 sq. km. and its diameter is 19.5km, while its depth is 630m. The Ngorongoro Crater floor is dominated by open grassland with a patch of woodland known as Lerai Forest. This forest provides shelter for animals such as elephants, eland, monkeys, and various bird species.

It was fantastic to see elephants in their natural habitat. We mainly saw male elephants with their huge tusks of ivory, the mum and baby elephants go higher up the crater with different vegetation. The grass is apparently sweeter down the bottom where the males hang out but elephants are fairly solitary animals anyway. The females do come down sometimes but this is only temporary. The males head up the crater when he is ready to mate, the female leader can decide whether she is interested or not… girl elephant power (if that’s such a thing).

Most people won’t agree as they aren’t the prettiest of animals but warthogs are super cute in my eyes, I first saw them in Hell’s Gate National Park in Kenya. It’s easy to tell their sex just by looking at them, the male has two sets of facial warts, is larger, and has longer tusks. They shelter in burrows at night which have been abandoned by other animals, they enter tail first and defend the entrance against predators with their menacing tusks. 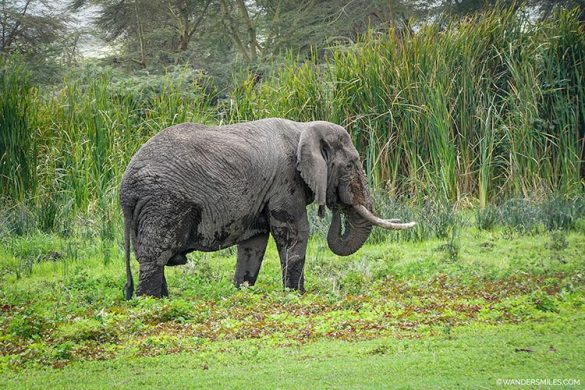 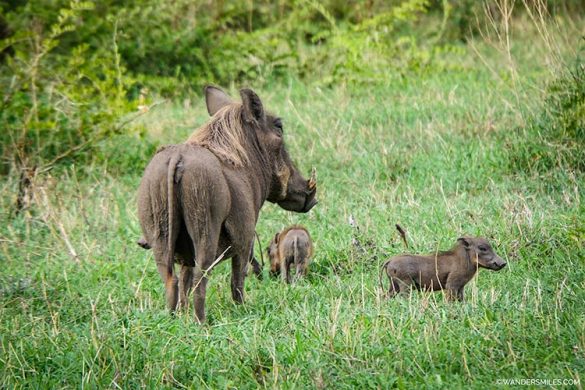 Ngorongoro is home to around 500 species of birds. The mix of forests, canyons, grassland, lakes, and marshes form an ideal habitat for an enormous variety of birds. During the rainy season, you can see the arrival of Eurasian migrants at the open pools. White storks and Yellow Wagtails mingle with the local inhabitants; stilts, saddle bill storks, ibis, ruff, and various species of ducks.

Pink flamingos fly in to feed on their breeding grounds at Lake Natron where you will find hippos wallowing in the water. We spotted Secret Ibis and Egyptian Geese along with White Stork which migrate back to Europe.

We spotted many of the distinctive grassland birds such as Ostrich, Kori Bustards, and Crown Cranes. Kori Bustards is Africa’s heaviest flying bird and is considered to be a polygynous species. They take no part in raising the babies, the females effectively become single mums. Seeing the flightless female ostriches was wonderful as their heads just moved around to survey their surroundings, now these are definitely big birds, the male being the largest bird in the world. The Crown Crane, shown on the Ugandan country flag, looked magnificently elegant with its’ grey neck and golden head plumage.

Getting to Ngorongoro Conservation Area

This can be done in a day from Arusha as we did, it takes around 4 hours to reach Ngorongoro Crater.

Our guide from Kilimanjaro booked our tour with Tanzania Wildlife Safaris and he turned out to be very knowledgeable but it is worth doing your research to ensure you get the full experience with snippets of information about the crater and the wildlife. Here’s a comprehensive list of the best Ngorongoro safari tour companies with reviews.

How much does the Ngorongoro safari cost?

It is worth trying to get a group of you together to reduce the individual cost per person. We could only muster up two of us making it around $600 each. Tanzania Wildlife Safaris list its current safari prices on its website. Costs will include entrance fees, vehicle permit, taxes, transfer in 4×4 with a roof hatch, and a packed lunch.

Take a good camera with a zoom lens

I have a Sony A6300 mirrorless camera and bought a 50-200mm zoom lens to ensure I could capture these beautiful creatures – not long enough to catch the Black Rhino though. This Big Wild World was better equipped, check out her Olympus OMD EM-10 gear list, tips for preparing as well as her stunning shots! Your guide should have super zoom binoculars too!

Where to stay in Arusha

We travelled from Arusha to do Ngorongoro Carter in a day. Lots of lovely places to stay in Arusha, whether you are relaxing after summiting Kilimanjaro or just chilling and enjoying what the area has to offer.

Sinzia Villas boasts a garden, sun terrace, and a shared lounge, it is situated in Arusha, 50 km from Olpopongi – Masai Cultural Village & Museum.

Siret Hostel offers amenities including a garden and a terrace. Popular points of interest around the property include Old German Boma and AICC Club – Nyama Choma. 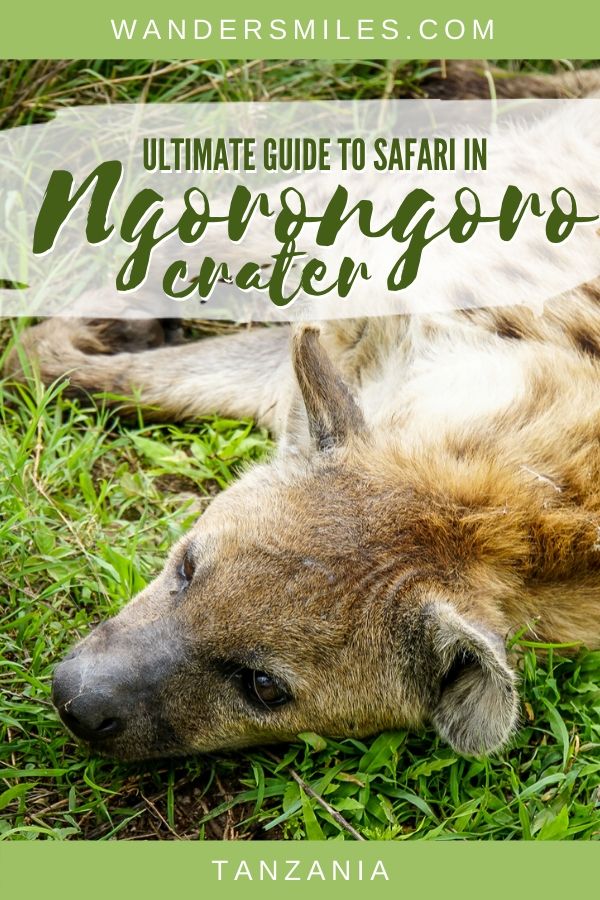 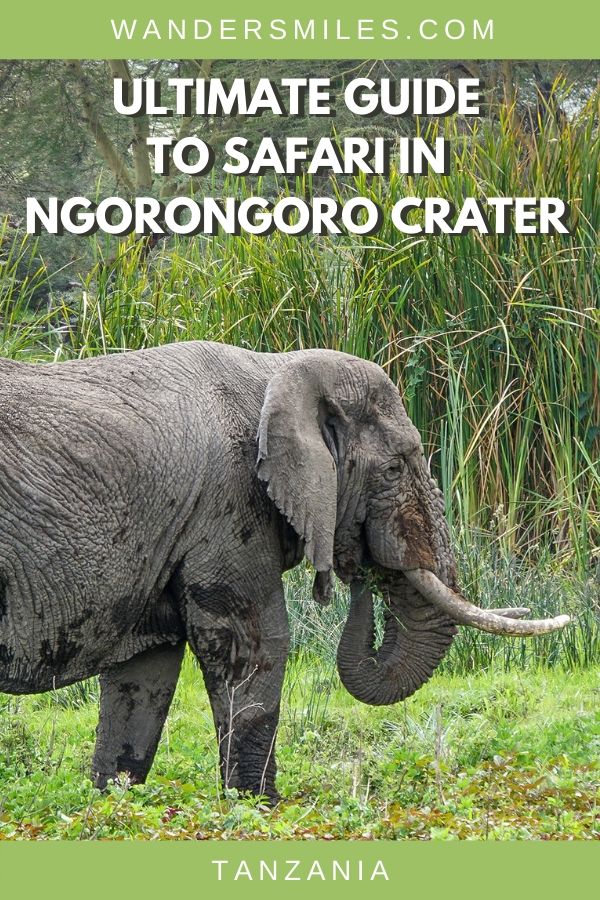 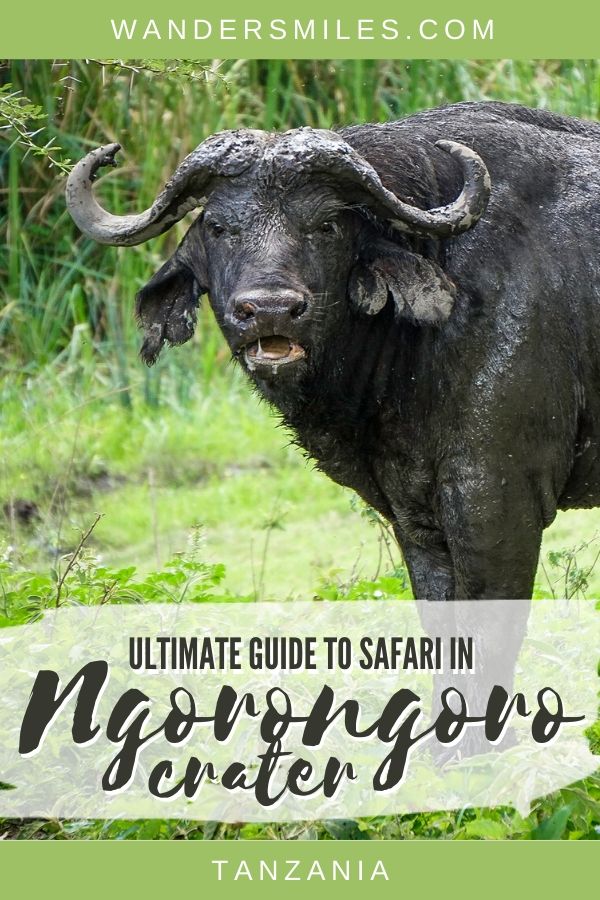 Trekking to the salt plains of Lake Assal | Djibouti

5 Incredible Things To Do in Qeshm | Iran