Prague in the Czech Republic is full of quirky, contemporary and old displays of art. The city is thriving on the European scene for weird and wonderful visuals that certainly raise a smile as you wander round. Here’s some fine examples of surreal art in Prague.

DISCOVER THE SURREAL STATUES AND ART IN PRAGUE

Peek in the spiralling Idiom

The Idiom, sometimes dubbed the “Column of Knowledge“, is the work of Slovak artist Matej Krén. The Jenga-style tower of 8,000 books has a narrow tear-shaped opening creates a ten-foot hole in the side of the tower. Kren installed a mirror inside the funnel to create the illusion of a magical, unending spire of books and the experience of looking down into the waters of a wishing well. Take a look inside and feel the infinity, it’s pretty mind-blowing.

Look up for the ‘Man Hanging Out’

Don’t call Prague’s fire and police like some, Man Hanging Out is a quirky sculpture in the Stare Meso area of the city. This art piece depicts psychoanalyst Sigmund Freud hanging by one hand on the top of a building, looking down and wondering whether to make the leap of suicide. It is a thought-provoking sculpture by artist David Černy displaying Freud’s constant struggle with anxiety and fear of his own death.

Located on the intersection of Husova and Skorepka 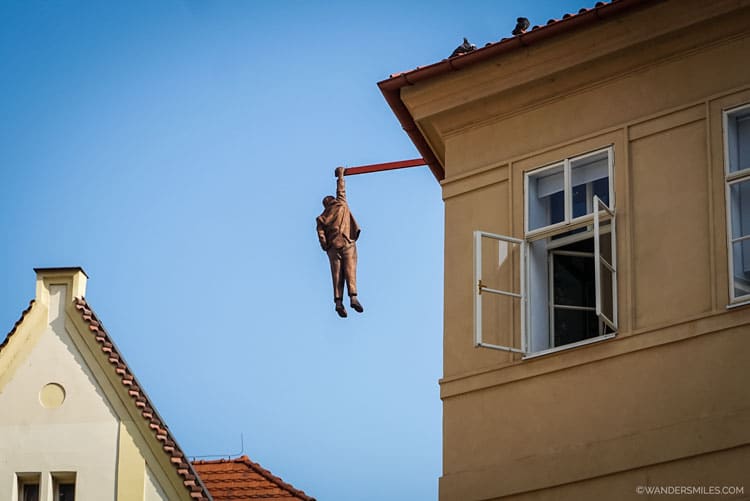 Spot the Stumbling Stones of Prague

German artist, Günter Demnig, has been tirelessly placing stones for different victims of the Nazi regime since 1995 in front of their last chosen residence before their deportation to concentration camps. The Stolpersteine, (Stones of the Vanished or Stumbling Stones) have been a roaring success and you can find 70,000 across 22 countries. How many can you spot dotted around the streets of Prague?

The project has since spread across Europe, and this morning the latest ‘Stolperstein’ was laid in Prague, outside the last home of the Czech writer and journalist Milena Jesenská. 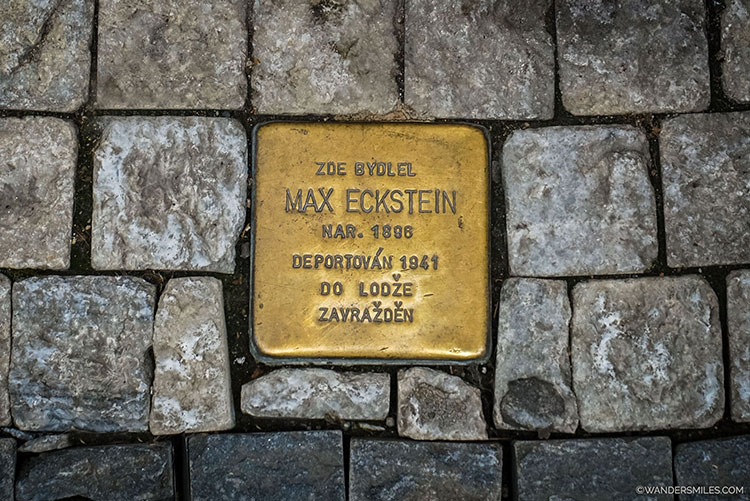 Marvel at the surreal Statue of Franz Kafka

Sculptor Jaroslav Róna installed the Statue of Franz Kafka in the neighborhood where the author spent most of his life and would have been able to see this square from his home. The sculpture shows Kafka taking the place of the narrator, while a huge, empty suit takes the place of the unnamed acquaintance which depicts a scene from his 1912 short story, “Description of a Struggle.” It’s a pretty surreal vision! 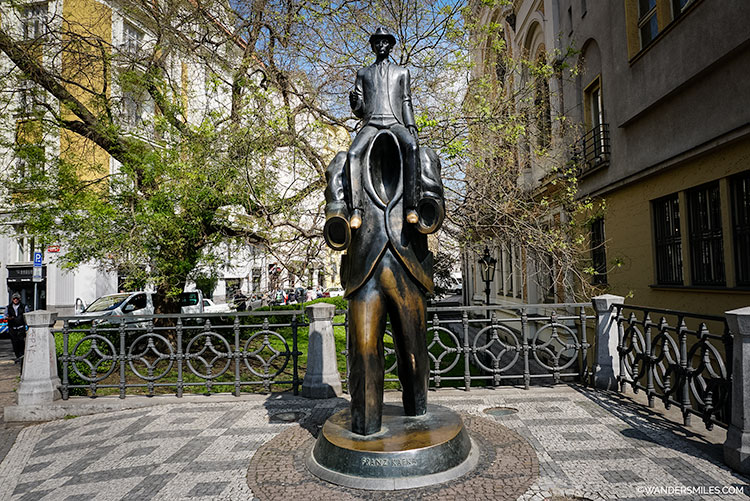 Bringing life to the Quadrio Shopping Centre, Head of Franz Kafka is an epic kinetic sculpture by David Černy comprising of 42 shiny plates of stainless steel that constantly rotate and align to reveal the face of the famous Czech writer, Franz Kafka. This piece depicts the tortured soul and self-doubt that affected him throughout his life. You could sit and watch this 11m revolving art piece for hours. 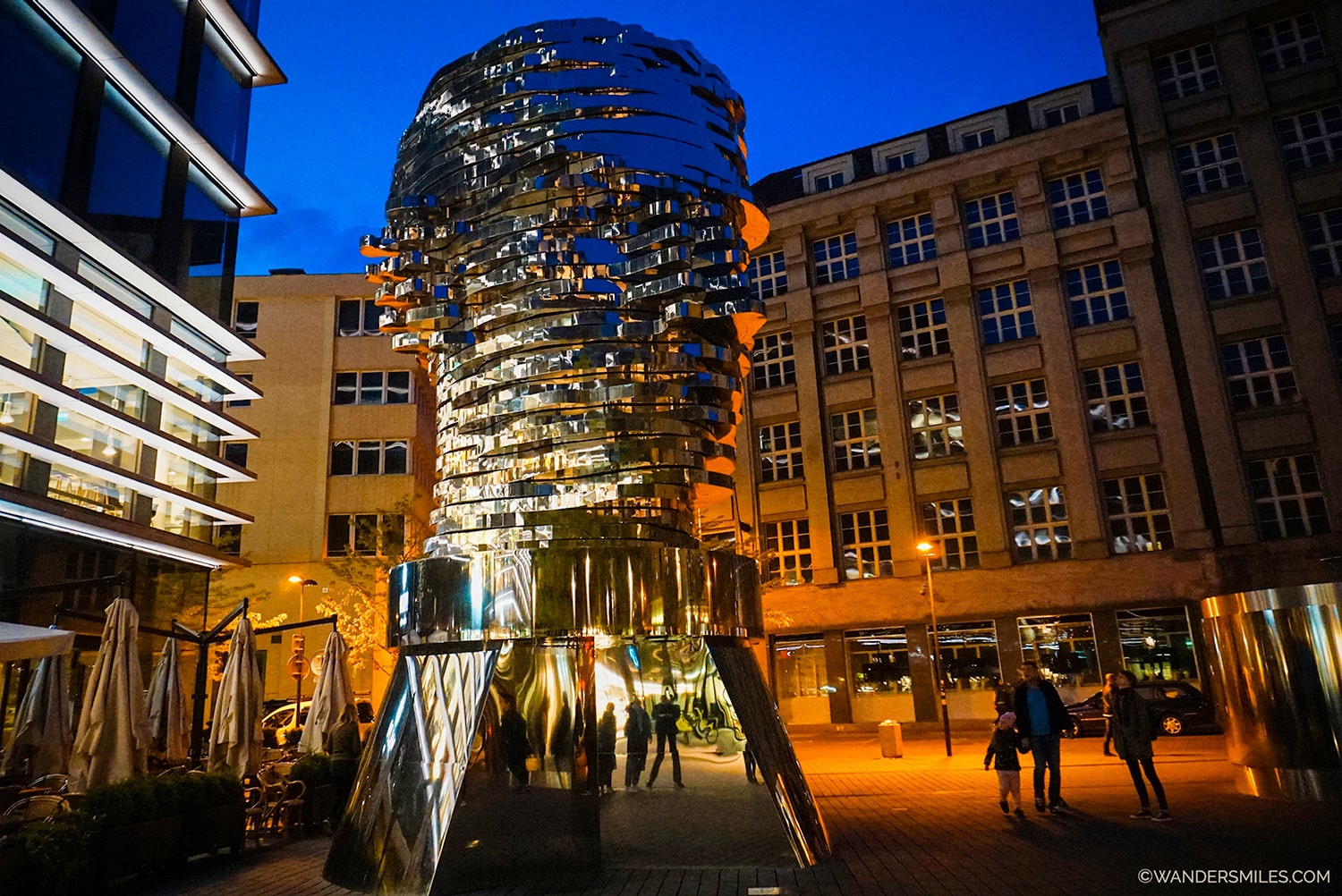 The upside down horse from Prague is a bizarre statue located in Art Nouveau Lucerna Palace, discovered during a food tour of the city. The statue represents King Wenceslas riding an upside down dead horse and it has been created by David Černý – the same sculptor who created the crawling babies, another intriguing statue in Prague. The statue was not well received at all by the authorities in Prague and this is why today, it is “hidden” inside the gallery, hanging from the ceiling. The upside down horse is a mock-up of the statue of King Wenceslas riding a horse, in Wenceslas Square from Prague.

Located at 36 Vodičkova // Spotted by The World In My Pocket 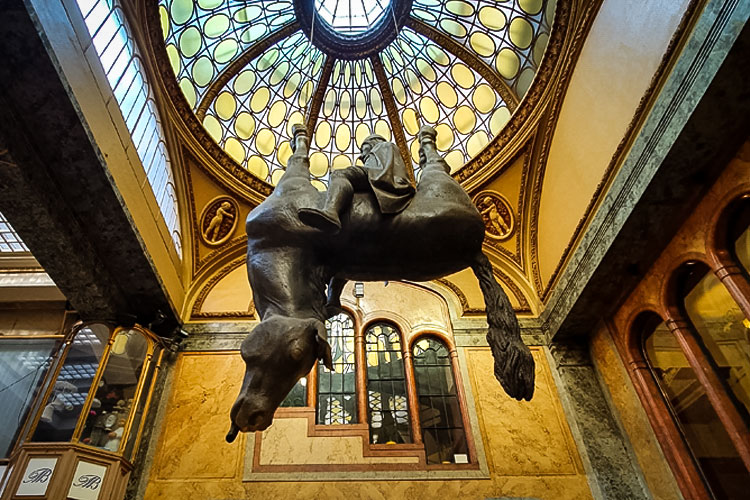 Jump on the weird Crawling Babies

As far as surreal art in Prague goes, you will not miss these 3 rather bizarre faceless crawling babies as you wander through Kampa Park. These famous bronze sculptures with bar code stamps squished into their face are the creations of David Černy and are part of his “Babies” project, a commission to make the notoriously ugly Zizkov TV Tower appear more attractive. There were some fun photos going on as people jumped on or peeped out from between the legs of the oversized Crawling Babies.

Located next to the Kampa Museum // Spotted by Wanders Miles 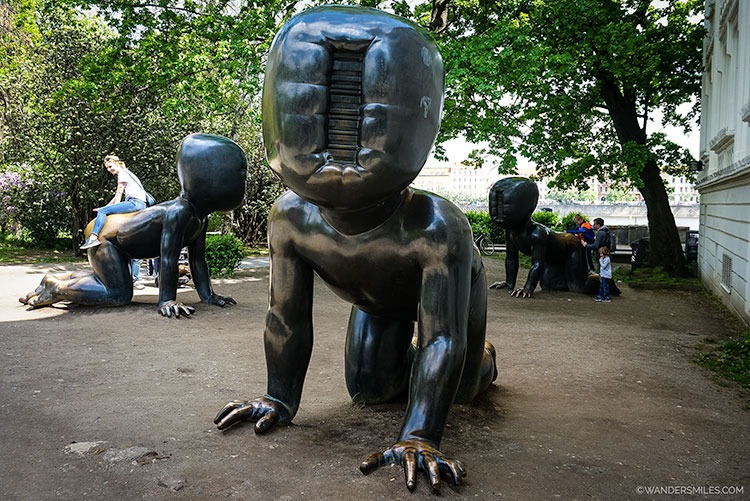 Yellow penguins come with a warning!

This row of 34 yellow penguins marching in a single file line across the Vltava River was created by the Cracking Art Group. As cute as the penguins are, they carry a serious message about climate change and plastic consumption. They are made out of recycled plastic bottles, and the artists hope to start a dialogue about plastic waste and the way human behaviour is threatening the habitat of penguins and other animals in Antarctica and beyond.

Located at Kampa Park // Spotted by The Nomadic Vegan 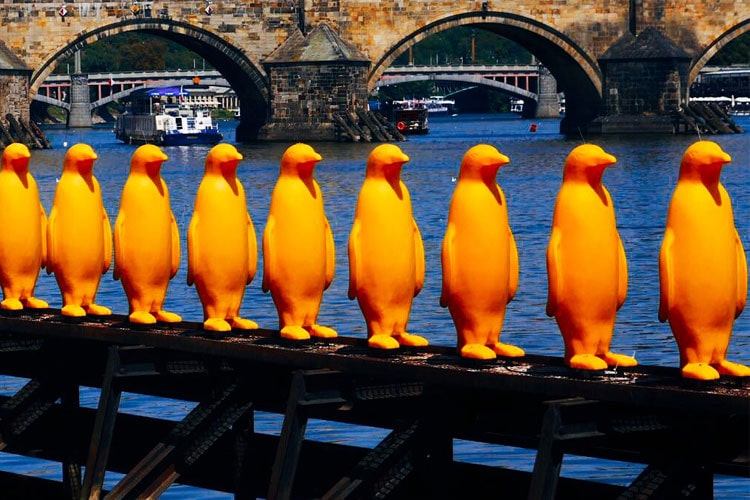 Make your mark on the Lennon Wall

As you turn the corner, you know when you’ve reached the John Lennon Wall. The vivid display of Lennon-inspired street art and Beatles song lyrics graffitied onto the wall is a sight to behold, a sharp contrast to the secluded street near Kampa Park. Following the murder of John Lennon in 1980, an image of the singer was painted onto the wall.

During the twilight of Communism it was the site where young Czechs wrote their grievances against the regime. Despite many attempts by the authorities to whitewash Lennon Wall, it is now a permanent symbol of love and peace and is forever changing as artists and people write their poignant messages. It’s a popular tourist attraction so get there early of you want a selfie without photo-bombers. 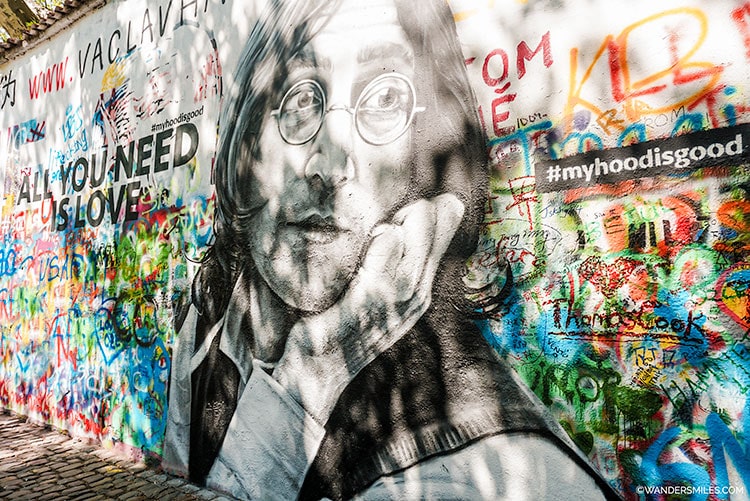 The controversial artist David Černy manages to shock and provoke with Proudy which was installed in 2004. The two bronze men sculptures are writing out famous quotations from Czech literature with their never-ending ‘pee’ onto a basin in the shape of the Czech country. It’s a pretty memorable sculpture and certainly has viewers smiling and taking note of the sculpture simply known as “Piss”. Certainly a memorable surreal art piece in Prague. 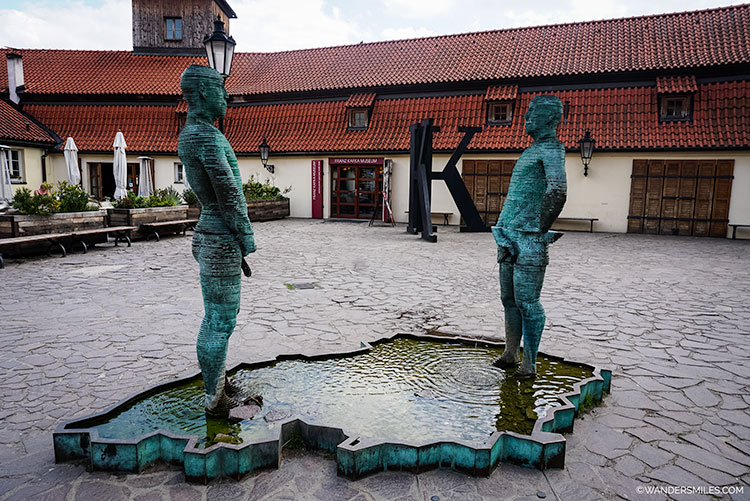 Bohumil Hrabal was one of the well-known figures of Czech and international literature. His books were translated to 25 languages, a few of them were made into movies too. In the place where his house used to stand now a so-called “Hrabal Wall” can be found. It’s very easy to get there, the mural is right at the exit from Palmovka metro station (yellow line B). The wall shows the writer surrounded by his beloved cats, with some of the most memorable quotes from his books written here and there. While you are here it’s worth to take a look around as there’re some other decent examples of Prague street art too! 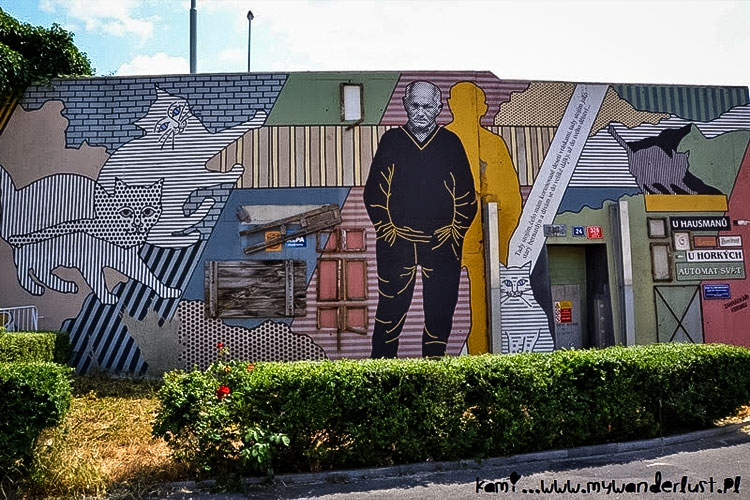 Another David Černý’s creation, another set of babies, this time placed on Prague TV Tower. The 10 black babies were originally installed on the tower in 2000, when Prague was Europe’s capital of culture. Even though they were supposed to be temporary, locals became to like how the babies made the TV Tower look and eventually it was decided they’d stay.

In 2017 the babies, each 350cm long and 260cm tall, disappeared for 2 years for planned maintenance. However, new ones were made instead, this time with a more durable construction that  should easily last for decades. 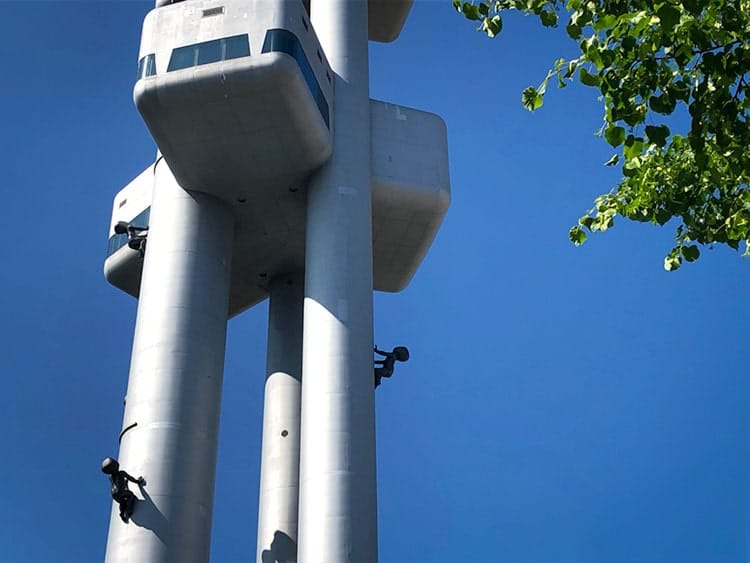 Have you come across any strange and surreal works of art in and around Prague. Do comment below any wonderful creations you’ve come across!

LIKE THE SURREAL ART IN PRAGUE BLOG? PIN FOR LATER! 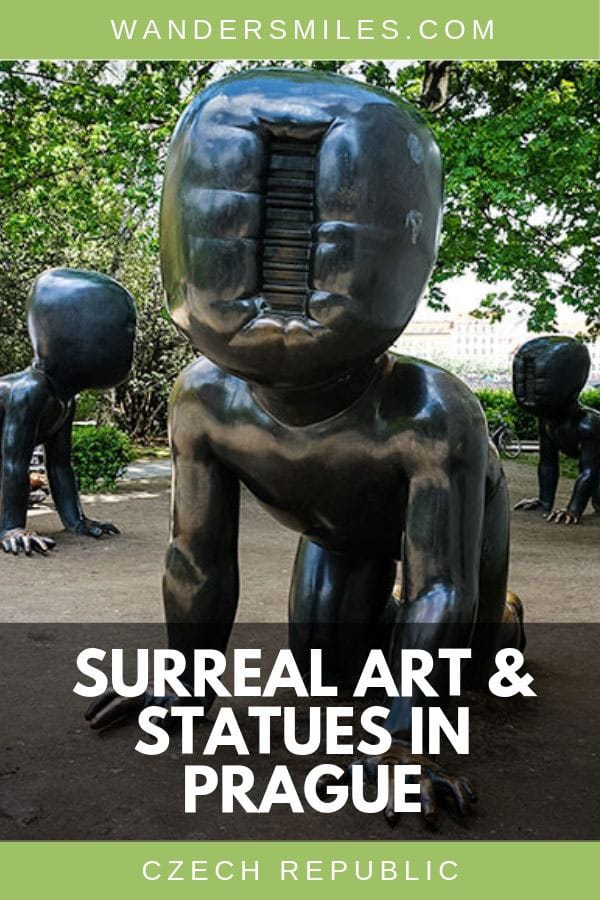 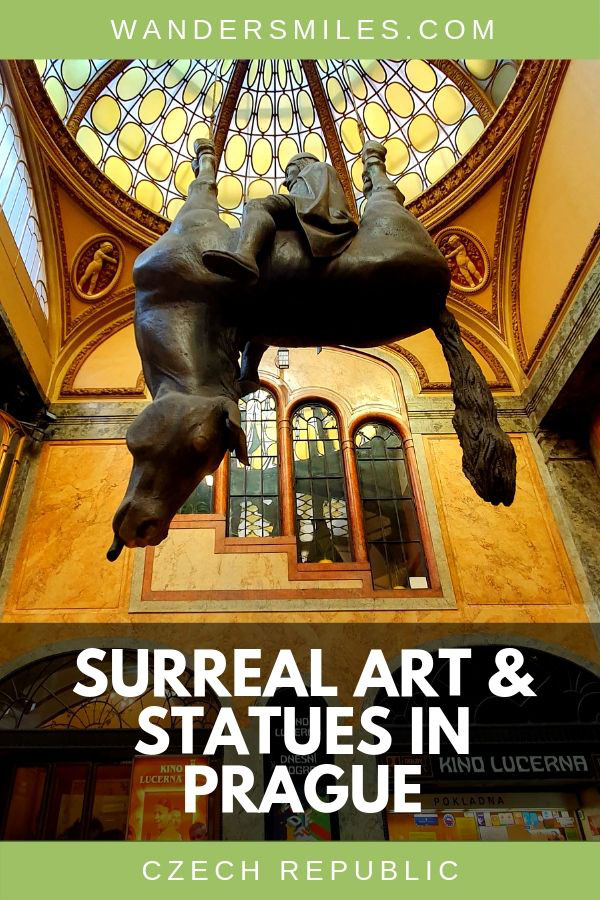 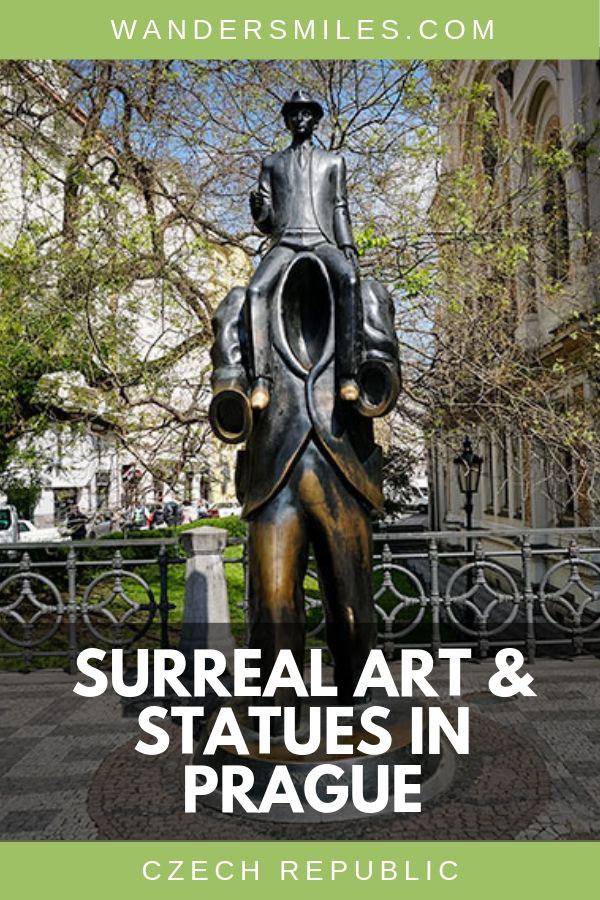 Best places to stay in Kathmandu | Hostel to luxury hotel

Top things to do in Istanbul // Turkey

Rovaniemi – Things to do in a Winter...

Why visit Kraków in December // Poland

Sailing on the Bosphorus // Turkey

It’s a shame that in my 1.5 days in Prague’s stay, I couldn’t cover half of what is mentioned there . Although I was awestruck by the John Lennon Wall and the courage the Prague civilians showed during various war for their civil rights . Czech Republic is always known for its rebellious spirit .

I think the Velvet Revolution proved what a strong race they are standing up for what they believe in.

I have seen the Lennon wall and crawling babies but not the rest. The Jenga-style tower of 8,000 books looks pretty awesome, would’ve loved to visit if I had known about it before my trip.

There’s so much more I didn’t cover too, I’d love to go back and see more of the crazy art around Prague.

I have only been to Vienna and completely missed out on Prague. I really love the message and concept behind the yellow penguins and wondered why I have not heard about this before. Thanks for sharing such an enlightening post, one with real stories and sights to learn about! Prague is next on my list.

I’m the same, I missed Vienna. What I loved about the art in Prague, not only was it quirky but there was a message behind them all that says something about the country.

I must admit that this is a side of Prague I’ve never really considered, despite having been there three times already.The Lennon wall looks fantastic and how cool are those yellow penguins spreading such an important message?! But I think my favorite piece is the Column of Knowledge with all those colorful books creating such an awesome work of art!

The Column of Knowledge was pretty cool. A group of young school kids came in and swarmed round it, I was so nervous they were going to knock it over!

I haven’t been in Prague, Czech Republic but I’m going there next year. I’ll try to visit all the places you mentioned especially Column of Knowledge. It looks so cool! I want to take a shot like that too. It also makes me think of how they made it. Hrabal Wall looks amazing too! I just hope I can take a selfie here!

There’s so much more too than I got chance to see, do your research before you go to make sure you see as much surreal works of art as possible!

This is one of my favorite parts of Prague! There are so many unusual and even bizarre statues all around the city! I’ve seen some of these, some are new to me but I could definitely think of a few more interesting ones to add to this list 🙂 Thank you for sharing, this was a really cool reading 🙂

Oh do share the knowledge, which ones have you seen that I should find next time I visit?

The Man Hanging Out is interesting. It may appear silly and funny for some but yes, I would have to agree with you that this has a deeper meaning. It is certainly thought-provoking and is a good discussion/debate piece.

It’s definitely a great piece for debate as are many of the crazy art sculptures in Prague – can’t get enough of it!

I spent 4 days in Prague and could find some street art but could not spot these statues. These are really stunning and now I am thinking for Prague again. I would love to check column of Knowledge as it looks very interesting. And The mocking Statue of King Wenceslas Riding an Upside-Down Dead Horse looks very photogenic.

I’d done some research before I arrived so I did go looking for some of them but I missed so many, I could go back to Prague too!

Giving me wanderlust! 9 of the Best Hikes in Oahu, Hawaii https://t.co/xebAp2EQIx via @aworldinreach #hikinglife #travels

Reply Retweet Favorite
12 Things That Surprised Me About Moscow, Russia (As an American) https://t.co/fbg8Q2XFlW via @HavClothWilTrav #travels

Giving me wanderlust! 9 of the Best Hikes in Oahu, Hawaii https://t.co/xebAp2EQIx via @aworldinreach #hikinglife #travels

Reply Retweet Favorite
12 Things That Surprised Me About Moscow, Russia (As an American) https://t.co/fbg8Q2XFlW via @HavClothWilTrav #travels