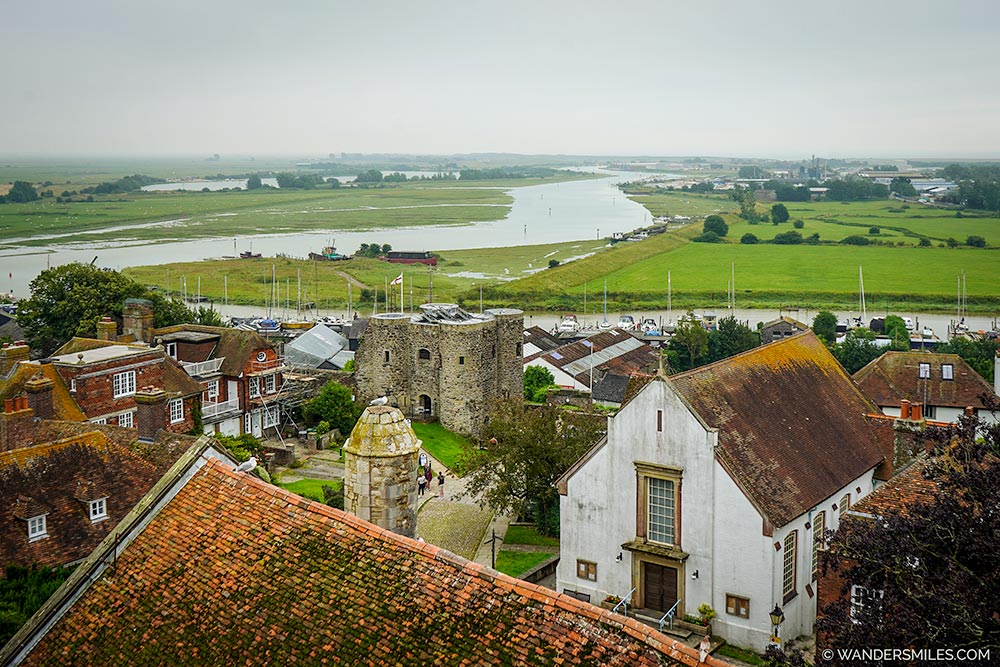 Rye is an attractive medieval town with history, myths and secrets waiting to be discovered around every corner. The pretty streets are full of curiosity shops, pubs to snuggle up in and fine dining restaurants. Start planning your itinerary for 2 days in Rye with the help of this guide.

St Mary’s Church has watched over the Parish of Rye for over 900 years. It is an iconic part of the skyline and offers stunning views of the town and countryside.

The current ‘new’ building was constructed in the 12th century, and it is exciting to see beautiful ancient artefacts such as bright and bold stained glass and the clock which was installed in 1561 and is still keeping good time.

The highlight of any visit to St Mary’s is the Belfry Tower. For a small fee (entry to the church itself is free) visitors can scale the tower and enjoy the best views in Rye.

Climbing the tower is exhilarating! Narrow corridors, steep ladder stairs and gloomy corners open out onto a panoramic rooftop. 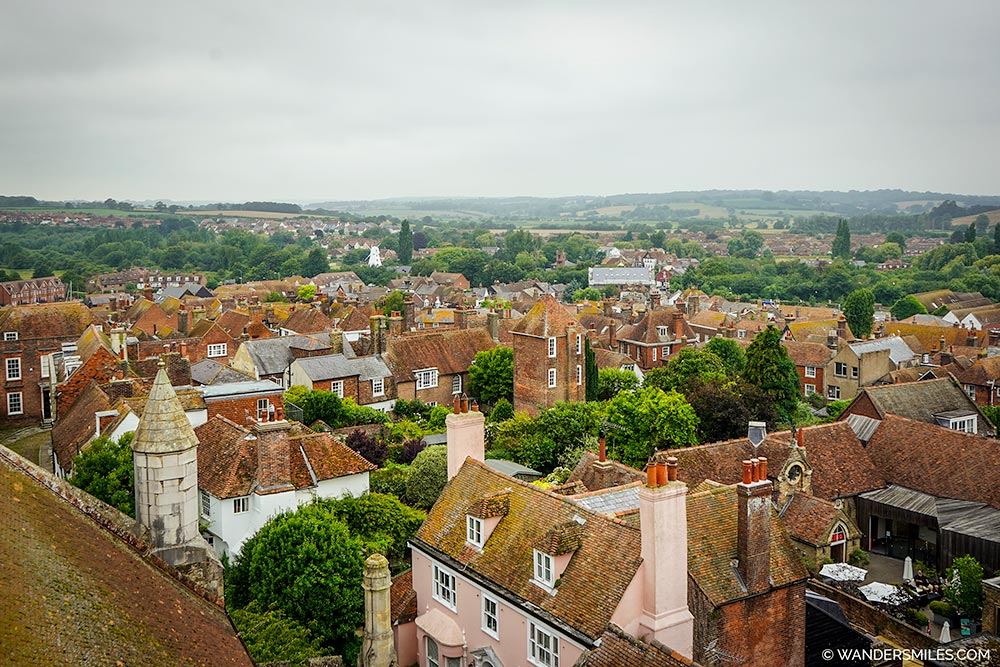 Rye Castle Museum has two permanent exhibits, both are well worth a perusal.

The Ypres Tower, named after an owner of French descent, is one of the most historic buildings in Rye. It was constructed in 1249 and its main purpose was to defend the town against attack from enemies across the sea. The Tower has also been a fort, a home, the mortuary, a jail and court of law.

As a museum Ypres Tower is atmospheric and packed full of interesting displays of armour, medieval weaponry, smuggling equipment and local pottery.

The prison section of the tower is chilling (and is surprisingly loved by children!) See the cells where murderers were chained up and executed prisoners were displayed, then get some fresh air on the balcony overlooking a harbour that was once the centre of British commerce.

The East Street Museum was built in 1999 to house more of Rye Castle’s vast historic collection. 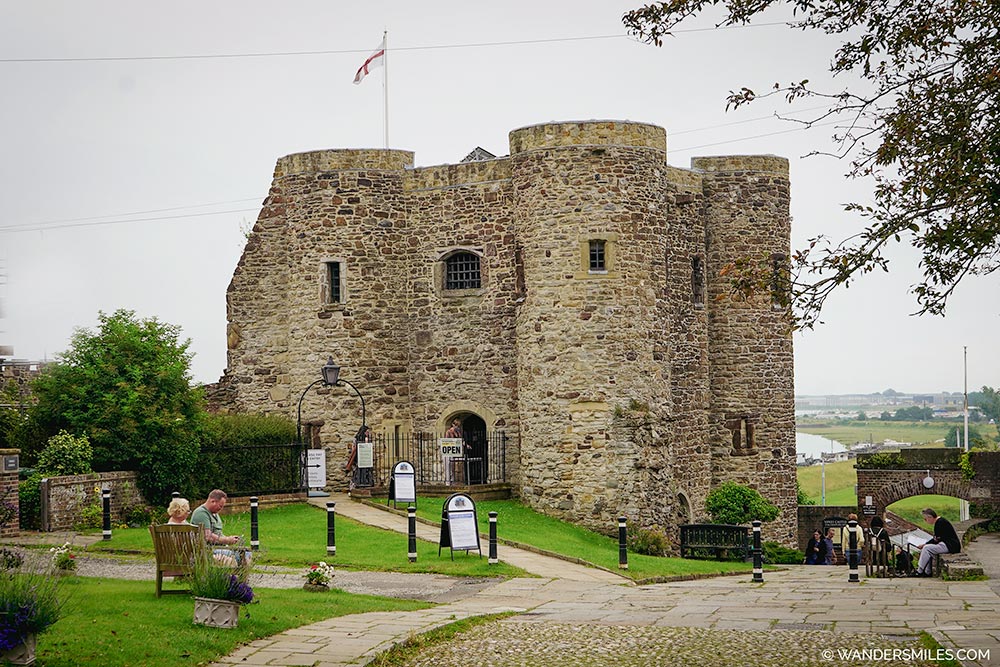 Mermaid Street is simply lovely! The pretty houses, lush greenery and cobbled streets are the epitome of English charm.

This delightful lane has been voted as one of the most ‘Instagrammable’ streets in the U.K but we just love the Disney-like, fairy tale quality.

There is history here too, especially at the 12th century ‘Mermaid Inn’. Stay the night where medieval sailors drank strong ale and the 18th century smugglers ‘The Hawkhurst Gang’ got up to no good.

Mermaid Street is also a great spot to grab delicious food and drink, try the homemade sausage rolls at The Mermaid Street Café or a pint of craft beer at The Old Borough Arms.

Lovers of antiques will adore exploring the shelves full of treasure at quaint shops such as The Confit Pot and then recovering with the traditional hospitality of Jeake’s House. 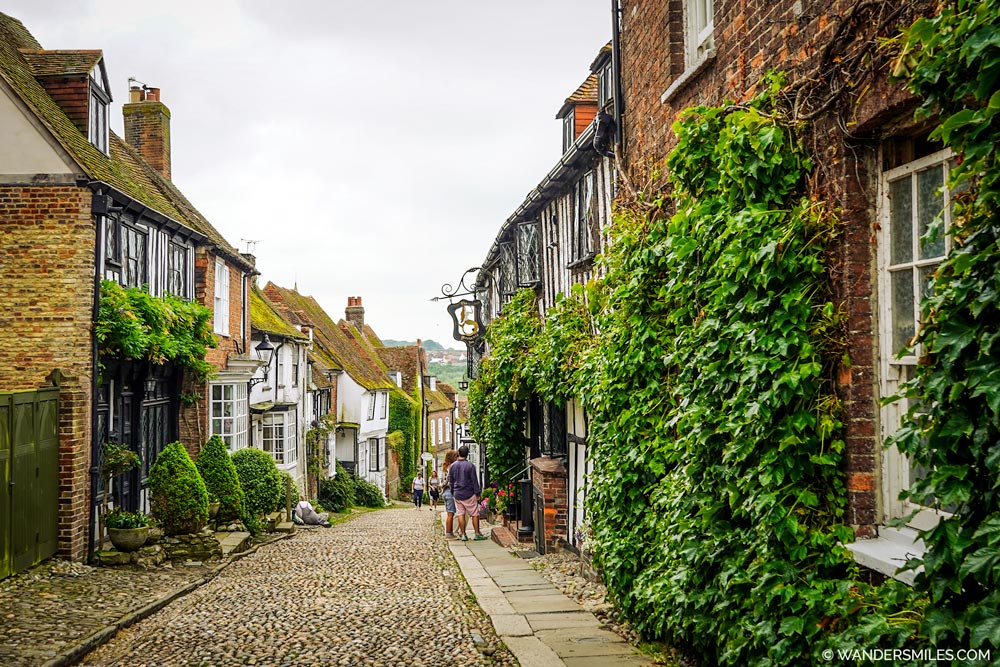 The Rye Waterworks was the first Micropub in South-East Sussex and in 2020 won a coveted CAMRA Pub of the Year Award.

The Waterworks was a labour of love needing lots of time and effort to turn a Grade II listed old Pump House into a cosy and quirky, family-run pub.

Well-behaved dogs and children are welcome, and the pub is particularly lovely in winter when the huge fireplace is roaring. 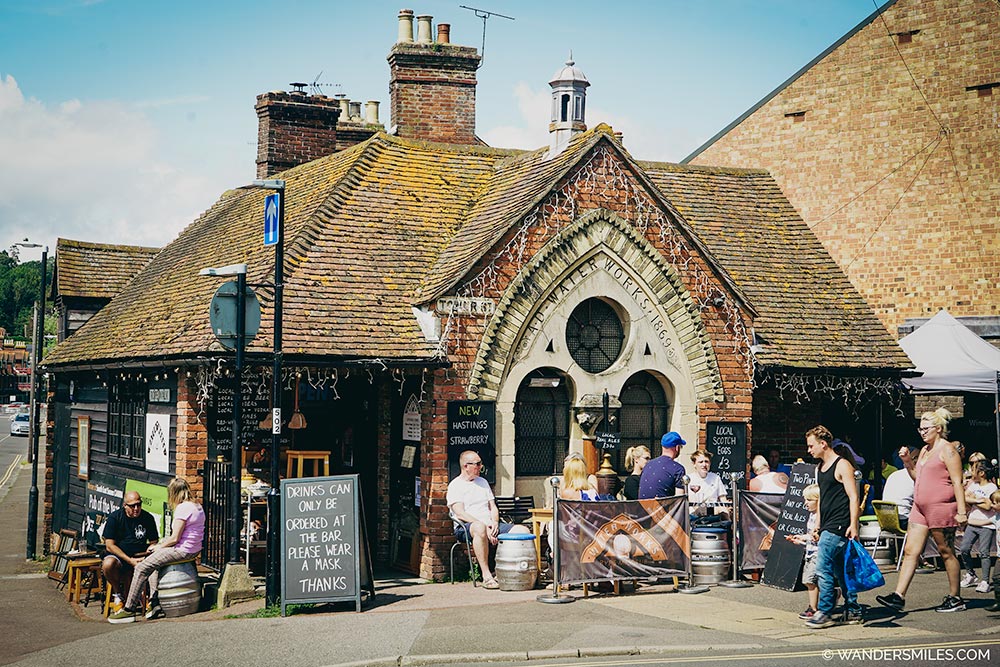 At the top of Mermaid Street, you will find Lamb House, a Grade II listed 18th century building with literary connections.

Owned by The National Trust, Lamb House is beautifully preserved and has fascinating exhibits about the famous writers such as E.F Benson and Henry James who have lived there.

Lamb House, re-named Mallard House, is the star of Benson’s popular book series Mapp and Lucia. It also features in Joan Aiken’s The Haunting of Lamb House, a collection of novellas about the previous residents.

The gardens of the house are gorgeous. Smell the scents of roses and feast your eyes on the spring blooms while sitting peacefully by the pond which teams with wildlife. It is the perfect oasis from the increasingly busy streets of Rye. Well, unless you spy the wandering ghost that loves the gardens too!

Rye Harbour Nature Reserve is one of the biggest and most important sites for wildlife in England. The wetland and coastal landscapes are the breath-taking habitats of over 4,300 species of animals and plants. Watch these characterful creatures from bird hides and the shores of pebbly beaches.

For 700 years Rye Harbour has seen the threat of invasion and the installation of revolutionary sea defences. It is now  challenged by rising sea levels. These trials and tribulations are related in detail at the Discovery Centre by descriptive panels, enthusiastic volunteers and short videos. The cake and coffee are good too! 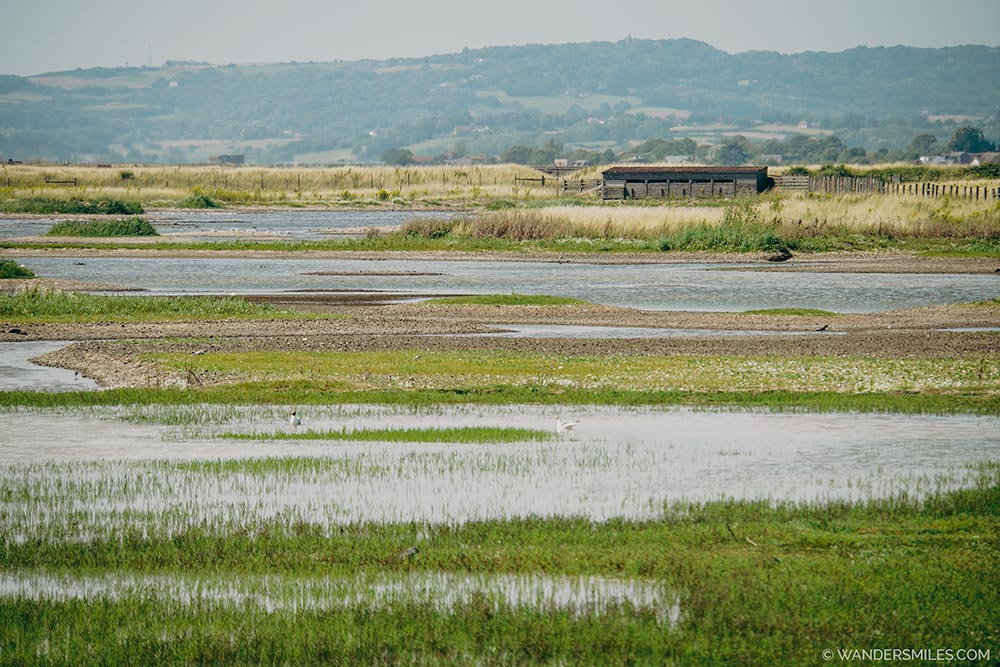 Rye Harbour, the Nature Reserve and the River Rother were all potential points of invasion during WW2 and the network of pillboxes, concrete bunkers to hide snipers brandishing machine guns, are evidence of the allied plan of defence and retaliation.

These relics of a bloody war are incongruous with the peace and beauty of the area, but visitors interested in modern history and military strategy will take pleasure in exploring the area where the pillboxes are hidden. 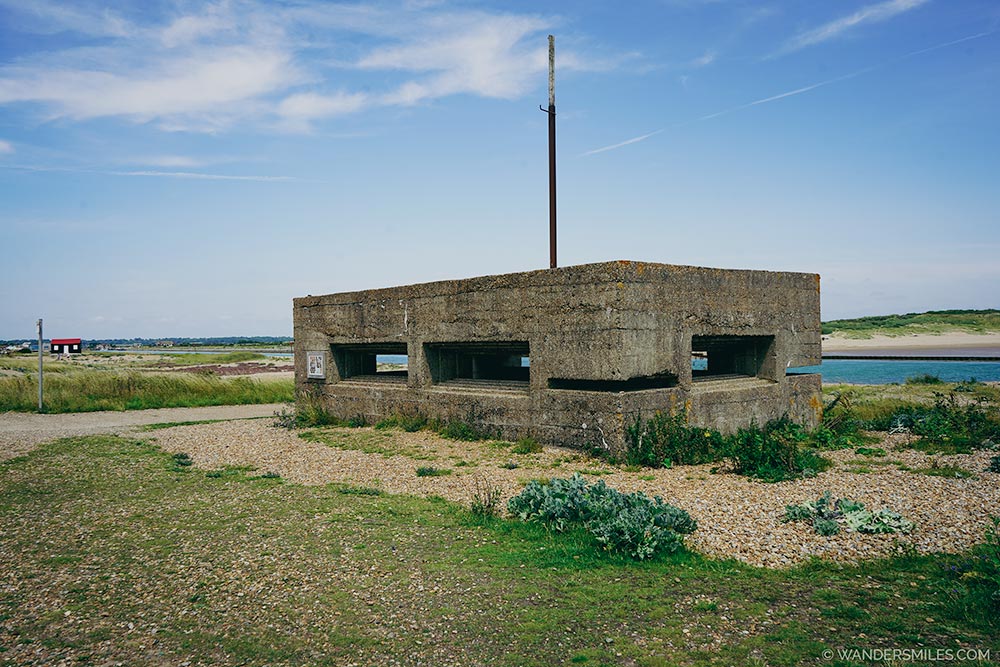 Camber Sands is one of the few Sussex beaches with actual sand as much of the coast is edged with shingle or pebble shores.

Camber is loved by tourists and locals alike for soft golden stretches of flat sand and rolling dunes. The most popular part of the beach is the west, where the River Rother meets the sea and provides perfect conditions for epic sandcastles. That said, Camber is remarkably unspoilt and solitude can easily be found.

Kite and windsurfers are a frequent sight on the waves thanks to the fresh breeze that often blows and there are plenty of shells and pretty rocks to be collected. 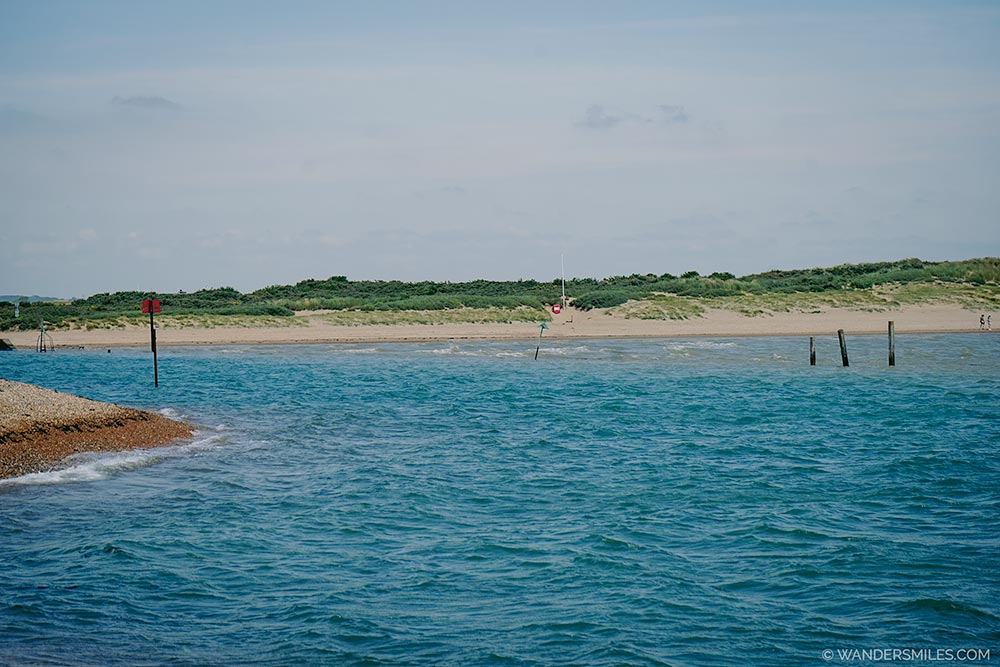 If you’re a keen hiker, then taking on the 31-miles of the 1066 Country Walk will make a grand day out (or two days, which was enough for us). It is a flat, low route through countryside that was once the background for the Norman Conquest.

The walk starts at Pevensey Castle, passes the 1066 Battlefield and medieval Winchelsea before finishing triumphantly in Rye. You will see rolling green hills, pretty villages, ancient churches and windmills.

On your journey seek out the ten wooden sculptures inspired by the Bayeaux Tapestry and created by a local artist. Amongst others, King Harold and King William stand guard near Battle Abbey and the animals portrayed in the tapestry can be found by Great Park Farm.

All that walking will leave you hungry! Places to eat along the 1066 Walk have the answer with mouth-watering menus featuring 1066 themed puddings. A fantastic idea! 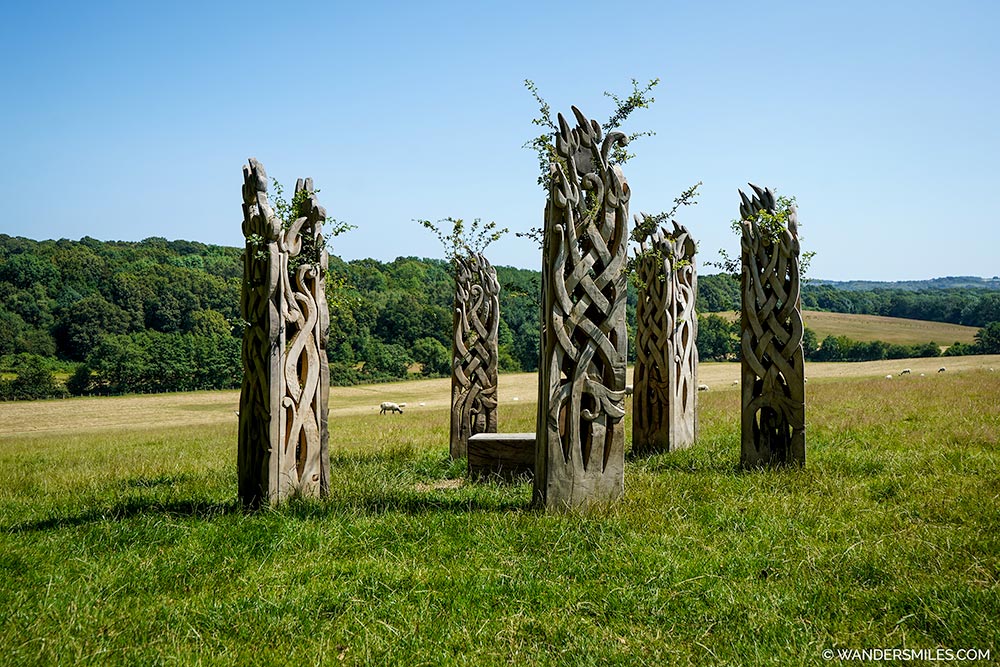 Carved sculpture on the 1066 Country Walk

WHERE TO EAT AND DRINK IN RYE

You will be spoiled for choice but there really is only so much you can eat on 2 days in Rye. Here are the venues where we managed to fill our boots!

The Globe Inn Marsh is a short walk over the River Rother and is a fine exmaple of the maritime heritage in Rye. The clapperboard inn was originally built in 1839 and now is a quirky gastropub style restaurant with creative cocktail and mouth-watering menus using sourced produce – try the mussels, they are delicious! The beer gardens are a popular hangout in the sunshine so get there early!

The Ship Inn near Rye’s Heritage Centre dates back to 1592. Originally built as a warehouse to store contraband seized from smugglers, the olde worlde style adds to the pub’s charm. We enjoyed the outdoor seating sipping on the fine wine drooling at the food served to the neighbouring tables. Their happy faces puts The Ship Inn on my must-visit restaurant next time I’m in Rye.

The Mermaid Inn dates back to 1156 and was rebuilt in 1420. Many original features are still visible and would be well-worth booking dinner (or a room) there to experience the infamous ye olde pub. We popped in for a simple lunch and fresh fish finger sandwich was a delight.

Eat and drink in Rye’s Harbour

Bosun’s Bite located on Rye Harbour opposite RNLI is quite literally the best Crab Roll I’ve ever had! The menu is small as it mostly serves the catch of the day so you are guaranteed a fresh dish. It’s always a good sign when a place is very busy with customers queuing out the door so we took ours away with us and I’m delighted to say that the packaging was biodegrable – extra points from me!

William The Conqueror is a dog-friendly pub has featured in the Good Pub Guide, and offers an international menu of fresh, home-cooked food. We had a happy couple of hours breathing in the sea air and sampling the craft beers in the spacious outdoor space.

BEST PLACES TO STAY IN RYE

Rye has many quaint places to stay from hosted B&BS, self-catering cottages, and quirky boutique hotels. Choose your deals from Booking.com or Tripadvisor.

I stayed in Knot’s Cottage centrally located opposite the micropub. The accommodation is a compact traditional cottage with 3 bedrooms, well-designed decor and fabulous communication from the hosts. >>> BOOK AT KNOT’S COTTAGE

The award-winning Jeakes House was built as a wool store in 1689 and every inch of the bedrooms, bar and dining room will take you back to days gone by. This quintessential residence is located on the infamous Mermaid Street.  >>> BOOK JEAKES HOUSE

PIN FOR PLANNING 2 DAYS IN RYE 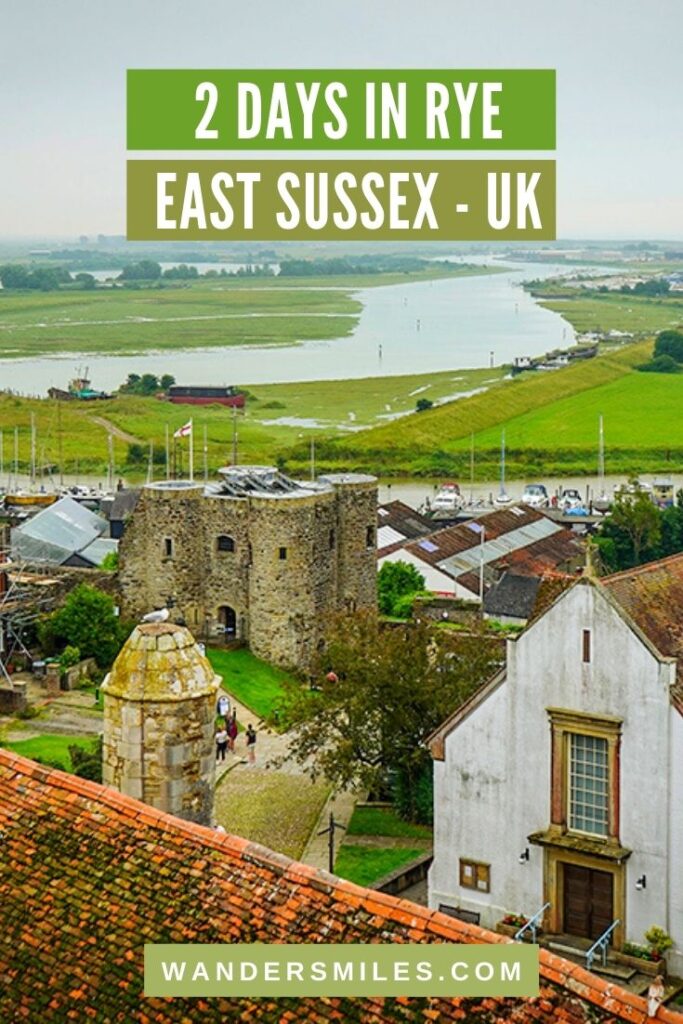 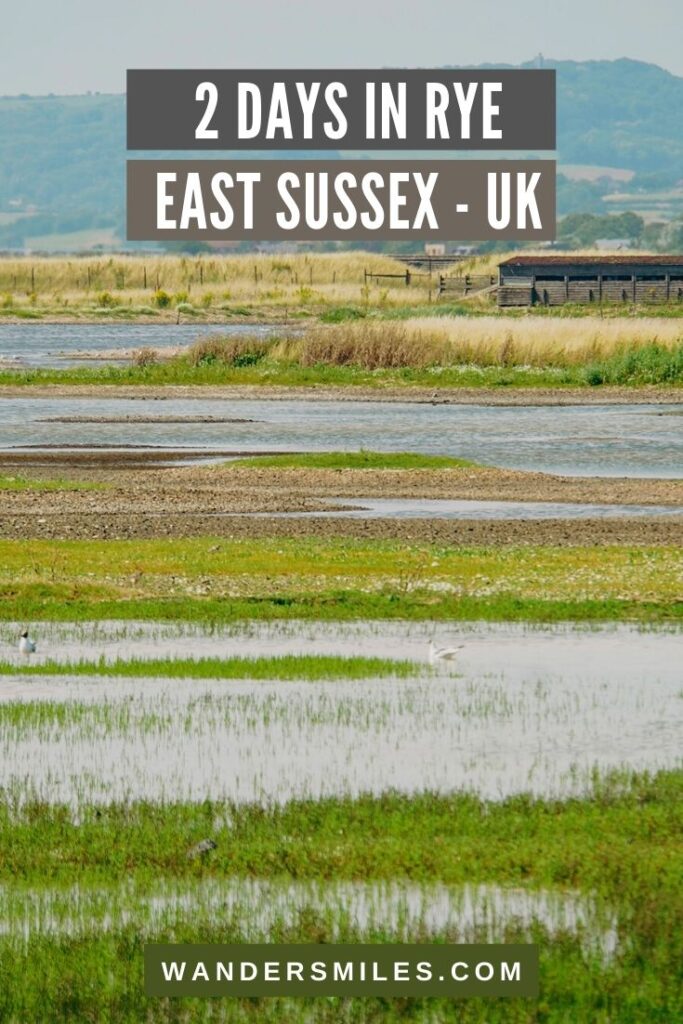 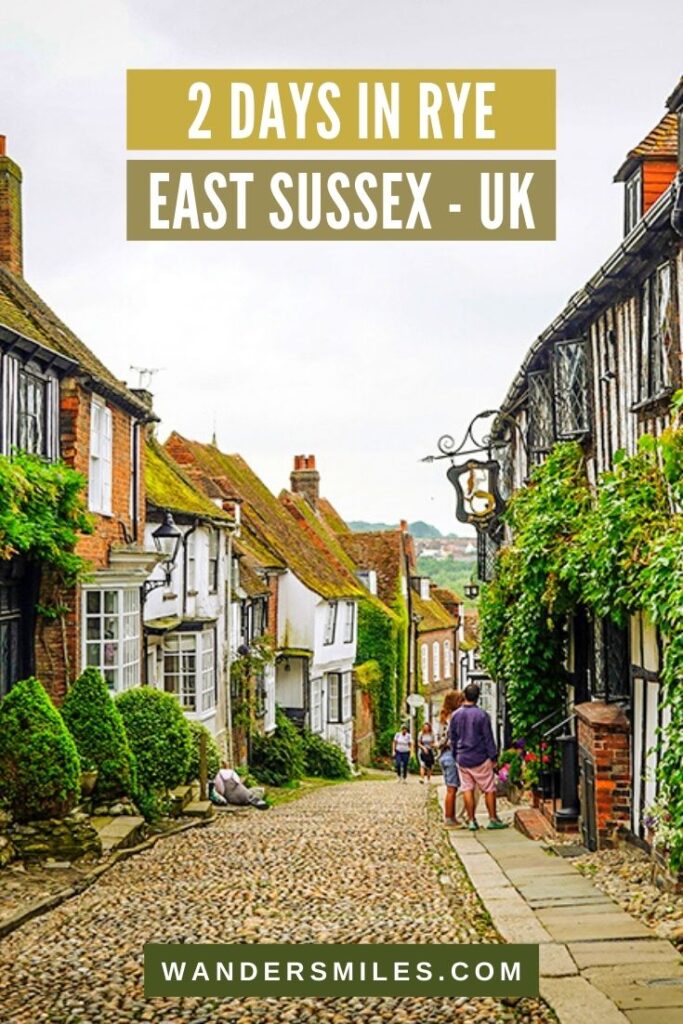 Guide to Seal and Bird Watching on the Farne Islands

Why visit Kraków in December | Poland

How to spend a day sailing on the...

Super-excited! I've booked on @cumbriawildlife Night-time Wildlife Adventure. Got my binoculars at the ready... hop… https://t.co/l3Tpms5kvU

Reply Retweet Favorite
When you’re early for check-in at @YHAHawkshead, head to Windermere’s West Shore. A wild swim got me feeling energi… https://t.co/9083bN3SA8

Super-excited! I've booked on @cumbriawildlife Night-time Wildlife Adventure. Got my binoculars at the ready... hop… https://t.co/l3Tpms5kvU

Reply Retweet Favorite
When you’re early for check-in at @YHAHawkshead, head to Windermere’s West Shore. A wild swim got me feeling energi… https://t.co/9083bN3SA8