The Danakil Depression’s three tectonic plates are slowly moving apart and several active volcanoes have emerged along the rift. One of these is Erta Ale, a continuously active basaltic shield volcano and is the most active volcano in Ethiopia. It is among the three volcanoes in the world that has had a long duration active lava lake, the last flank eruption was in 2017.

The Danakil Depression’s three tectonic plates are slowly moving apart and several active volcanoes have emerged along the rift. One of these is Erta Ale, a continuously active basaltic shield volcano and is the most active volcano in Ethiopia. It is among the three volcanoes in the world that have had a long-duration active lava lake, the last flank eruption was in 2017.

Getting to Erta Ale

After resting in Abala for the night after exploring the alien landscape of Dallol, we drove 2.5 hours and stopped for lunch in Irebti before we completed the journey to Erta Ale base camp in 4 hours. Expect an Ethiopian massage in the last 45 minutes of this journey over the volcanic landscape – it’s definitely one of the rockiest rides I’ve ever been on, don’t be attempting to drink water as you may find yourself wearing it!

On the way we saw camel caravans from Eritrea, a traditional way of exporting goods to Ethiopia considering the arid landscape is land-locked. As the Chinese are rapidly building roads in this area making Erta Ale more accessible to the masses and the ability to transport goods easily, I do wonder what effect this will have on their livelihood.

Camel caravan at the base of Erta Ale volcano

Preparing to hike up Erta Ale

Having arrived at base camp, we prepared our backpacks with a head torch, water, masks, sleeping bags, and an extra layer of clothing. As we ate dinner, we were treated to a vibrant and jaw-dropping sunset that any photographer would dream about. 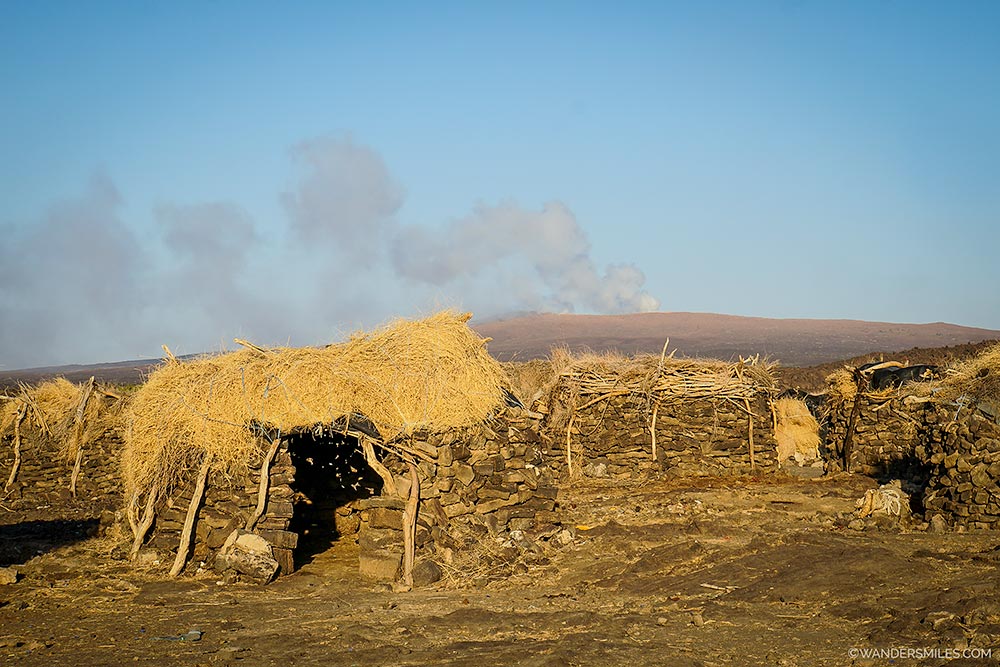 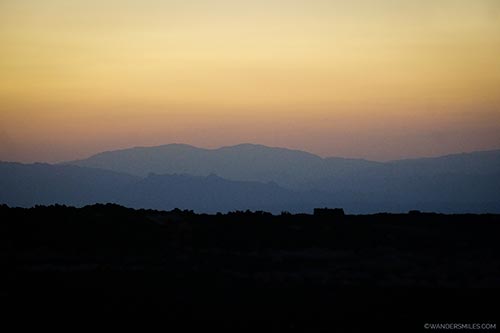 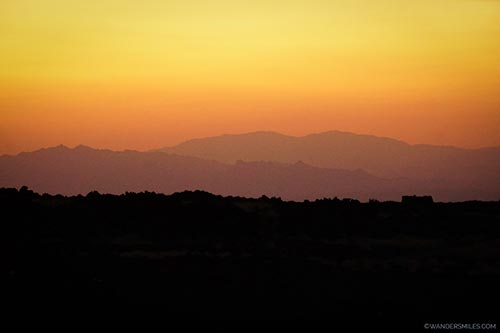 The 10km hike to the volcano takes around 3 hours. As long as you are generally fit the trek isn’t difficult, the only hurdle is watching your feet as you walk by the light of the head torch over the volcanic rock formations. I stupidly brought my less than perfect head torch so galloped along in the light of our speedy guide trying to avoid falling over.

We are followed by two armed guards, one in uniform and one in local dress, both wearing jelly sandals. This is mandatory due to an attack in 2012 where gunmen attacked a group of European tourists, killing five, injuring two and kidnapping four people. However, we were told the area is safe now, this is just a precaution.

Once we reach the camp, we drop our excess bags to go and get a peek of the volcano up close. It was pitch black and we could see the rim of the volcano which was smoking furiously. As we neared, a huge gust of smoke blew our way and right into our throats and nasal passages, I hadn’t imagined it would be so intense.

It was a little disappointing that we didn’t get to see the vibrant, lava lake in full force. I caught up with Jill from Jack and Jill Travel who kindly shared some photos to show me what I was missing, now that is the Erte Ale volcano vision I wanted. She describes her experience;

“I scrambled to follow, fighting the acrid smoke, and what I saw took my breath away. It was like staring at the surface of the sun, it was like the eye of Sauron itself…

The surface of the 60×100 m pool of lava seems to be alive. It was bubbling in spots, the black crust was cracking and sinking in some areas, forming in others. The color where it’s the hottest, this bright yellow so intense that it’s almost white, was mesmerizing.”

After a 4.30 am wake-up call, we trekked to the caldera Erte Ale to watch the sunrise. There was a smaller eruption in 2017 so some of the magma has not quite solidified and might be hollow, feel these out with your feet, I slipped through one and scraped down my shin.

There are two craters at the summit caldera. The northern crater has variable lava lakes and the southern crater is the permanent lava lake that was still smoking and it’s clear now why it is known as the “smoking mountain” in the Afar language.

The sunrise at Erte Ale was a truly magical experience I’d quite happily relive, however, we couldn’t hang around too long, we had 2.5 hours of descent to the base camp before the day heated up, and, believe me, it got very hot towards the end. Thankfully our drivers greeted us with buckets of water to pour over us to cool us down. 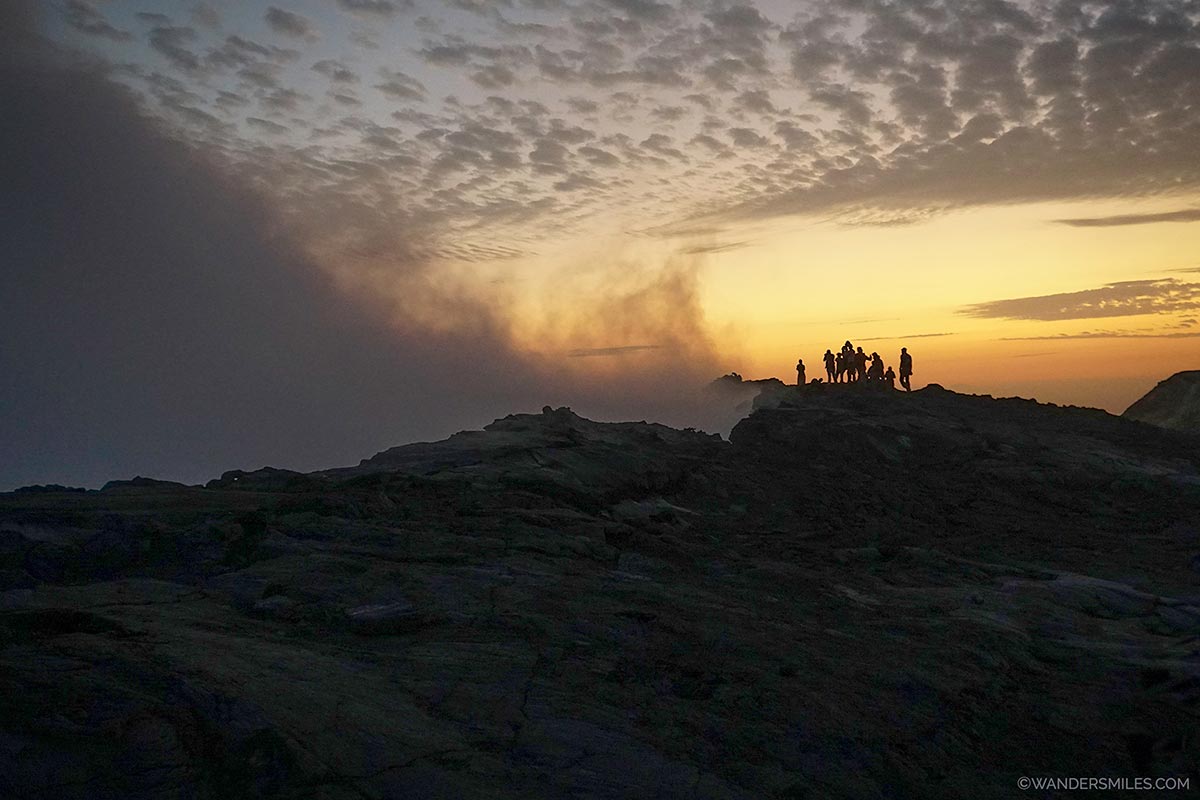 Sunrise by the Erta Ale volcano 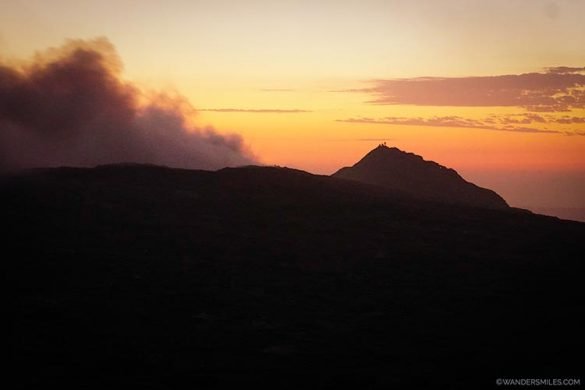 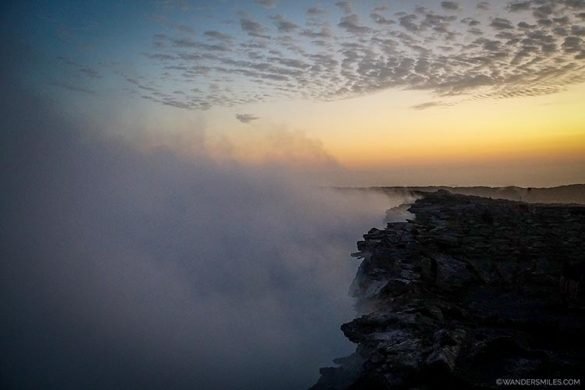 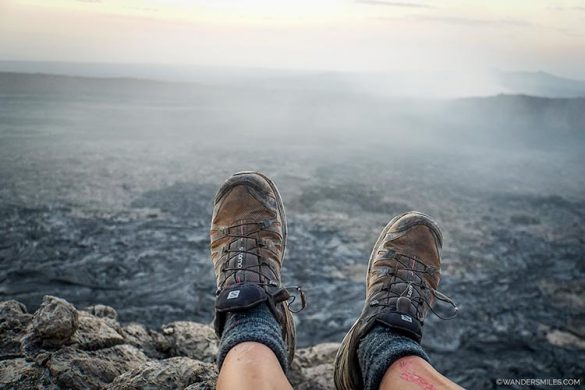 Injury from the hollow magma 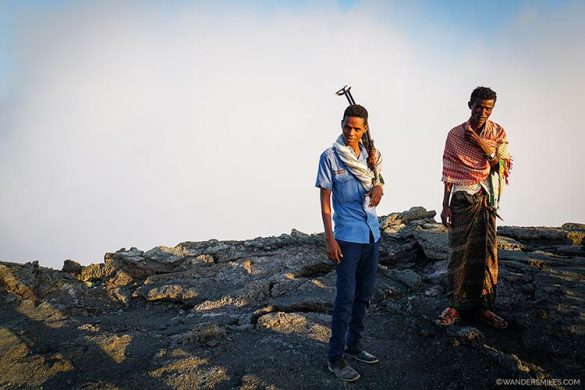 Between October and February to avoid the crazy temperatures of the summer months. The rainy season is between June and September making travelling more difficult.

The Afar government requires you to book a tour with a guided group to Erte Ale and be accompanied by military security guards. Our trip was organised by Trekkup Dubai who had scouted out the best people on the ground to use.

What to expect from the accommodation

The only option is a mattress supplied by the tour company which are taken up by camel, we carried our own mattress cover. Four mattresses are lined up together surrounded by a small wall of stones.

How to spend 2 days in Antigua Guatemala

Hi Vanessa, we’ve been to Ethiopia but never heard of this amazing hike. I would look for cool weather and plan with our next African visit. The volcano looks amazing!

What a great adventure! The fact that it is the hottest landscape in the world makes me a little nervous though. What was the temperature like during your hike?

It wasn’t too bad as it was at night but we had to get down after sunrise to avoid the hiking in the blistering heat, it got to about 40 degrees in the day but we went in November… as you can imagine, the summer it is not the time to go!

I’ve seen photos of the Danakil Depression but have not heard of this hike before. Adding it to my list of things to do when I visit Ethiopia.

Oh you should, I loved it. Definitely pick the right time of year though!

Wow, amazing pictures. This looked like an awesome adventure! I bet watching the sunrise up there was really special!