It seems hard to think when you’re hiking in the Shirkent Valley and gazing at the Iskander Lake in the Fann Mountains that Tajikistan only gained independence from the Soviet Union in 1991. The small landlocked central Asian country is a real gem for trekkers!

I have to admit when I saw this trip advertised I thought the pictures looked stunning but I had never heard of Tajikistan so I turned to Google to tell me more. Tajikistan is the smallest country of Central Asia surrounded by Afghanistan, China, Kyrgyzstan and Uzbekistan. Pakistan lies to the south separated by the narrow Wakhan Corridor. Tajikistan’s territory is 93% mountainous, the glaciers being the source of its rivers.

The Shirkent National Park in Hissar Valley is expected to grow dramatically in the coming years and was created in 1991 to preserve the plants, animals and natural ecosystems. Let’s not forget the valley is every geologist and dinosaur-lovers dream as 400 fossilised footprints of these ancient reptiles have been discovered amongst the trails.

Our flight arrived to Dushanbe in the early hours and we had just one hour to rest in our hotel before heading to the Shirkent Valley to start our hike. The scree and loose rocks made this hike a little tricky, I took poles and was certainly glad of them! We hiked along the channel streams, along the hills, saw the dinosaur footprints and the round trip was around 5 hours. Delighted to get to the bottom where a blanket on the ground awaited ready for a picnic lunch at the local farm with breads, salad, honey and fresh fruits, just what the doctor ordered! The family were so hospitable and we bought honey from them to take home, super delicious if you’re happy picking out the bee wings.

Leaving Dushanbe, we headed northwest towards Anzob pass which is reported to be one of the most treacherous passes of Central Asia. At 3372m above sea level though, there were some pretty spectacular and dramatic views.

We landed in Maghrib village in Yagnob Valley, named “Paradise on Earth” by the Yagnobis. The villagers are an isolated population but we sure were given a warm reception. The kids wanted to play games and say what words they knew, I guess from previous travellers. Some were shy and some had more front than Brighton, in a funny way though! Our lunch in the local house was traditional home-made soup, salads, plov (rice with vegetables and meat) and naan breads.

The walk up to steep grassland hills was glorious, past the farmhouses and plantations, perfect opportunity for some amazing shots leaping into the air before heading back to the vans for the best yet, Iskanderkul!

>> Read about my time in the magnificent Iskanderkul 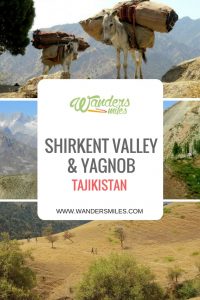 Get 5% off travel insurance

Always make travel insurance a priority! I’ve partnered with World Nomads to offer you 5% discount for first time customers. I can’t recommend them enough, the contract is easy to understand and, most of all, they are responsive when you need to contact them from abroad to resolve an issue. Click to claim your World Nomads 5% travel insurance discount.

Reply Retweet Favorite
Sunset strolls along the Heysham Coast watching the birds swopping and wading in the mud. Who doesn't love to hear… https://t.co/DIycQ1KYuX

Reply Retweet Favorite
Sunset strolls along the Heysham Coast watching the birds swopping and wading in the mud. Who doesn't love to hear… https://t.co/DIycQ1KYuX