The next part of our Madagascar adventure after leaving the Tsingy de Bemaraha Strict Nature Reserve took us via Belo to Morondava where we experienced the wondrous Boabab Avenue and Kirindy Forest.

Malagasy Proverb: All who live under the sky are woven together like one big mat.

Early start to get in the queue of vazas (foreigners) at the Tsingy de Bemaraha Park ferry to cross the Tsiribhina River. We endured a very bumpy ride back to the Queens Bar Restaurant in Belo for the lunch we ordered 3 days ago on our way through. Life is mora mora (slowly, slowly in Malagasy) in Madagascar so best not to leave these things to chance! 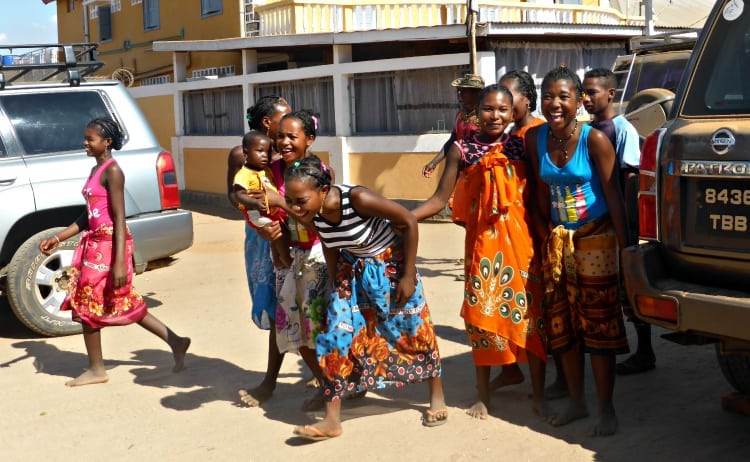 The Zebu (Malagasy cattle) with peppercorn sauce, french fries, and legumes went down nicely. The atmosphere was electric as there were very loud Malagasy tunes blaring out at a stall across the road, the kids were dancing to the beat having the time of their lives. A lady came past with a washing bowl on her head carrying live ducks and I found a small boy blowing up a condom, hopefully, mistaken for a balloon. Belo certainly had a lively vibe and brilliant people-watching territory! 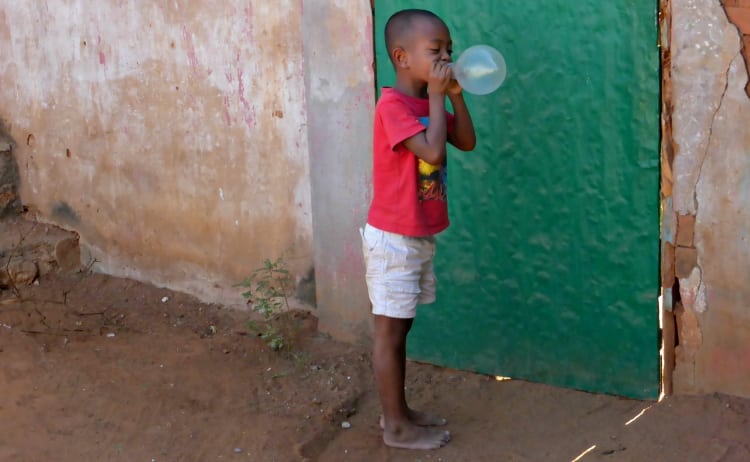 Another ferry ride was in order to leave Belo which fit our 4 cars and a few local passengers. Once we disembarked, just another 1.5 hours to see the Sacred Baobab.

This sacred baobab tree is a place of worship. In Madagascar, it is believed that ancestor spirits live in the trees and forests to watch over their kin, relay messages to and from God, and grant blessings. We could see bottles of rum and honey at the base of the tree which are offerings by family paying homage.

The 1000-year-old majestic tree towered above us and the swollen trunks are just huge, I wasn’t surprised to discover they can store up to 120,000 litres of water. Whilst some of our buddies bought souvenirs, we waited in the car and gave some bon bons to the kids, which became a little bit of a riot as word got around. Note to oneself, hand out goodies when there are only a few kids in sight! 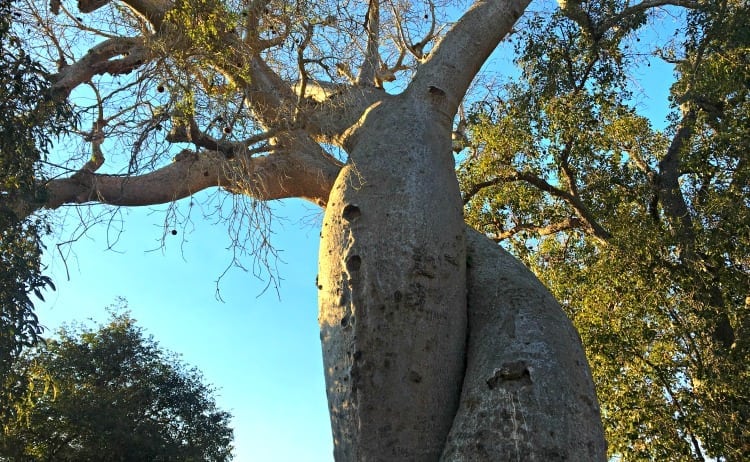 The race was on to get to Boabab Avenue or Alley before the sun went down. We made it! The 260m tree-lined roads between Morondava and Belon’i Tsiribihina were stunning and you can appreciate why the Boabab trees, known locally as renala (mother of the forest) are world-famous. 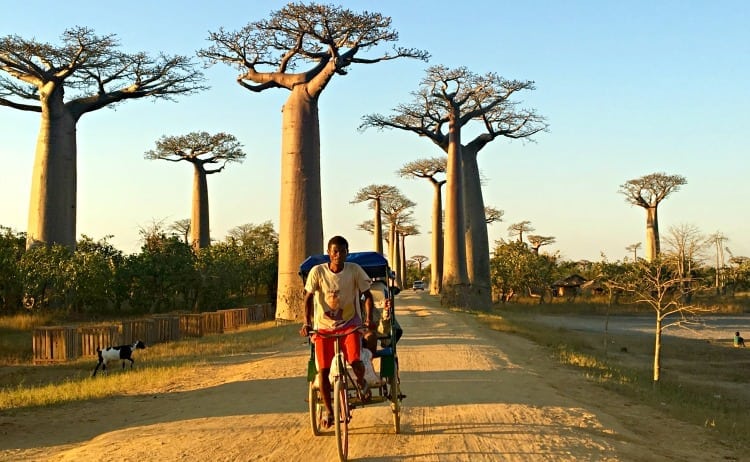 Just watching the sun go down casting different golden lights onto the trees made my day. The orange sky lit up, the thick tree trunks and wispy branches became silhouettes against the dramatic sunset, and no trip to Madagascar is complete without this experience.

The baobab trees used to rest within a dense green forest but have suffered much deforestation for agriculture. As the first step to preserving the national monument of Madagascar, Boabob Avenue was granted temporary protected status in 2007 by the Ministry of Environment, Water, and Forests. There is no payment to visit this site so the locals make souvenirs to sell and the kids will bring you a chameleon to hold in exchange for some Malagasy Ariary. 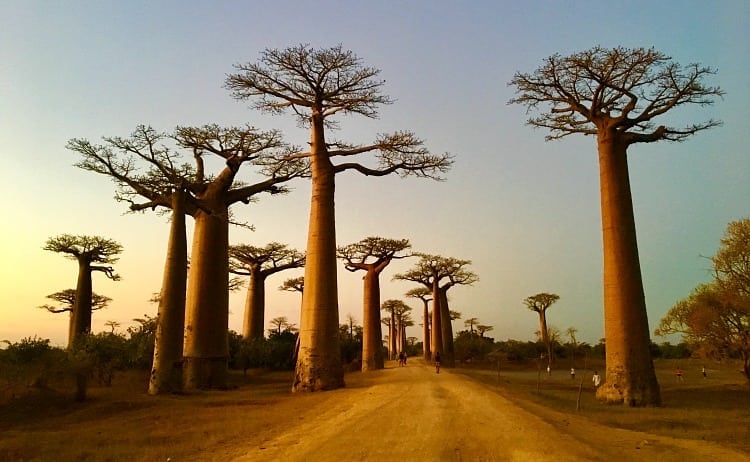 Located 400km from South Africa on the coast of the Mozambique Channel you will find the Kirindy Private Reserve. It is roughly 50 km from Morondava, north of Baobab Avenue.

We headed there on the hunt for more wildlife mainly endemic to Madagascar. We weren’t disappointed as the first animal we sighted was the endangered Fossa, the largest predator on the island. They say it is half-dog, half-cat in appearance but it is a relative of the mongoose family. They have unusually long tails to help them balance in the trees as they hunt lemurs, their prey of choice. We were careful not to go too close as they can be aggressive with humans too.

As we leisurely walked around the dry woodland forest we were on the lookout for lemurs as the park supposedly contains around 32 species, and there it was, a nocturnal Red-tailed Sportive Lemur high up in the tree in the daytime. How’s our luck? 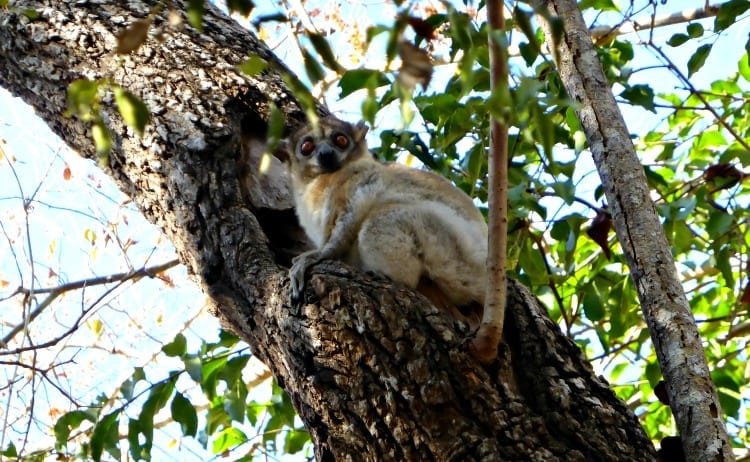 Next up was the common brown lemur chilling in the trees but after this our luck ran out. We stayed put whilst the guide went on the lemur hunt to report back without a sighting of the sifaka lemur. I had to keep moving I was getting bitten alive by insects so cover up your ankles, that’s all I’m saying! There was a snake slithering around in the bushes by the path but he was just going about his own business. 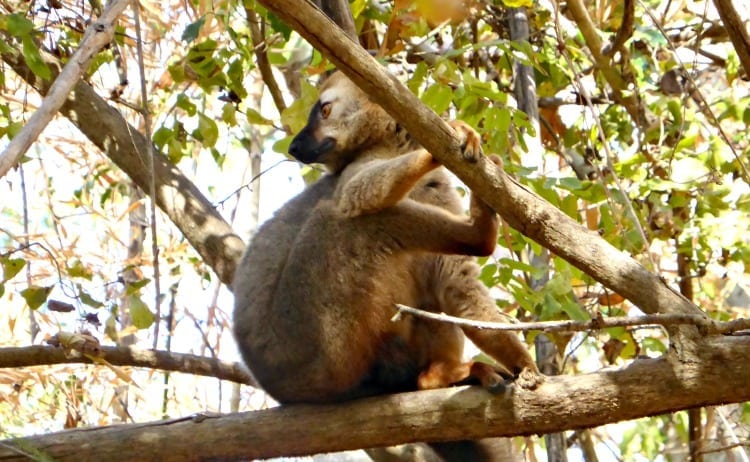 There were loads of interesting trees… did I really just say that? Can’t believe we foreigners have a tree named after us; the Vaza tree. Vaza means white foreigner in Malagasy and this tree peels like we do in the sun hence the name. We stumbled upon a rather phallic-looking tree which caused a few giggles amongst the group.  There is security to watch over the park as illegal logging takes place of the precious palisander (rosewood) and ebony which can only be found in Madagascar. Not sure how easy it would be to casually walk out with a huge tree under your arm.

The town of Morondava was really our base to see the local sights. As you drive through from the direction of Boabob Avenue and Kirindy Forest, you pass through a lively market street with so many different kinds of stalls; food, shoes, electronics, and more! There is chaotic happiness in the place, everyone wants to smile and wave.

The other end of town was the sleepy Nosy Kely beach where we stayed at Le Sun-Beach Hotel which was a wonderful place to chill after some busy days exploring. Great little haven right on the beach with a very welcoming staff and delicious cuisine in the restaurant. Nosy Kely beach is just one of the many beautiful beaches in Madagascar! 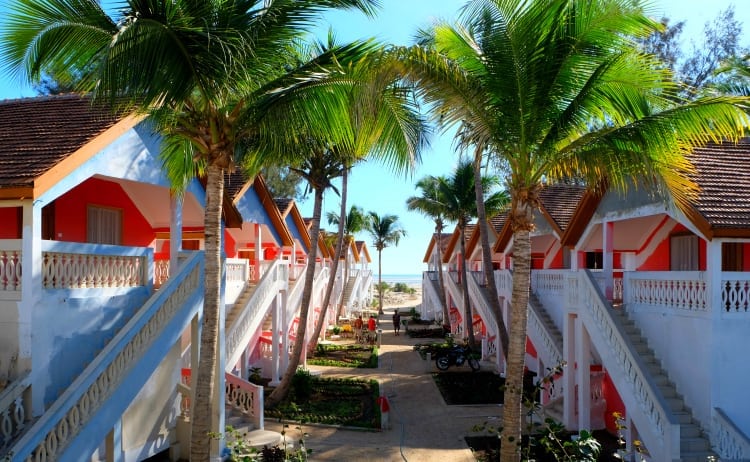 The sea isn’t so clear in this stretch of Madagascar but we went for a dip anyway. As we had our own yoga teacher on tour, we made use of the deserted beach in the morning for a session on the beach. The Vezo tribe resides in the coastal villages of southwest Madagascar and can be seen bringing in fishing boats each day before sunset for local restaurants and their families. 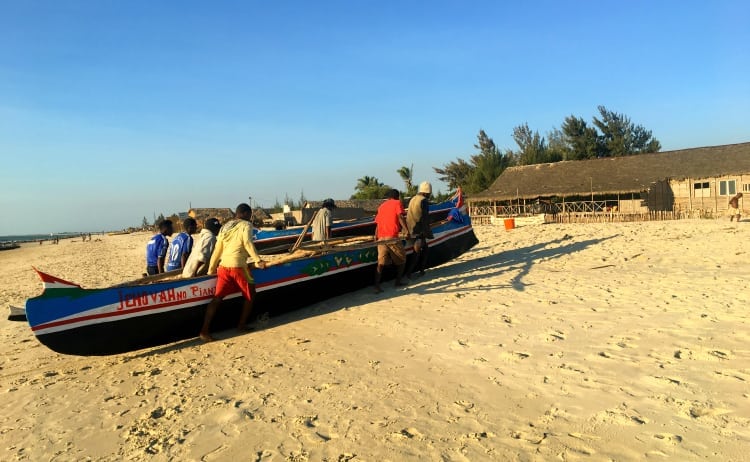 The evenings are relaxed too but if you fancy live music and atmosphere, L’Oasis is your place whether you are into reggae music or not. Jean Le Rasta, the owner, will greet you with a huge smile and the biggest dreads I’ve seen in a long time. The live band was awesome with free-styling reggae singers going for it every night of the week. My friend Rick made a special guest appearance with ‘You Raise Me Up’. I was unsure about his song choice I have to admit… I ate my words, it was epic and the live band joined in, singing the song in Malagasy. Wow…Misaotra Morondava (thank you in Malagasy) 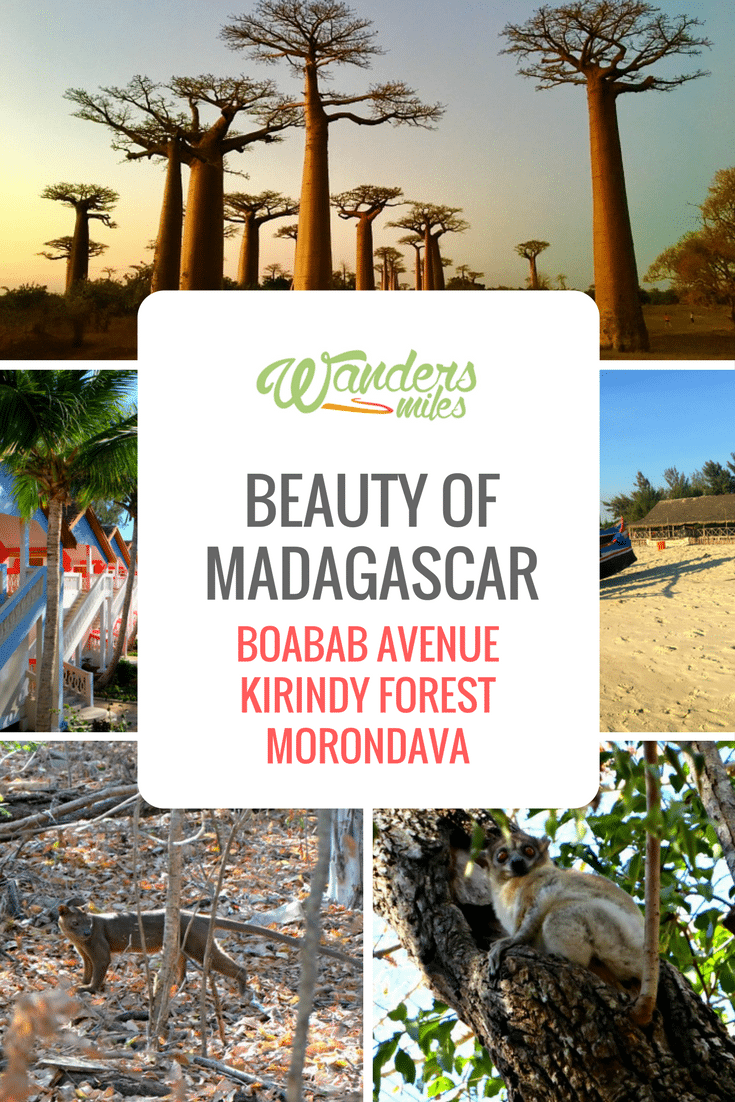 You are so lucky! Madagascar is on my bucket list but I don’t know if I ever get the change to get there as it’s quite expensive.. I would love to explore more Africa, it must be so different to travel there. Your pictures are lovely – happy you managed to get to the baobabs for the golden hour – it looks magical! I will now read your previous post from Madagascar and dream (and it’s dangerous coz I’m in the office!!)

Oh my goodness, this post is just gorgeous. Thanks for sharing the belief about the Boab trees, such majestic beings living to the age that they do. Really inspired to visit Madagascar after reading your blogs

I didn’t know about the legend associated with the sacred baobab tree. interesting read. The sunset at the avenue sounds so dreamy!! Unwinding over good music in the evenings sounds like the best way to end the day. Cheers!!

Baobab Avenue looks like an interesting place to visit. Your photographs provide a good insight into the life of locals. Oh that sunset is super amazing! The 1000 years old tree is quite fascinating. Love this post. Thanks for sharing! 🙂

Beautiful post! I love your description of the condom, the lady with the live duck as its takes me to the place. Its interesting that reggae music makes its way there. Back in the 70s and 80’s africa was active with Bob Marley. Not sure if its a consequence of that or the usual globalisation. Bottles of rum, for the god made me crack up 🙂

I want to visit Madagascar but the flights from Dubai are so expensive! I loved reading your stories but wish you would’ve posted some more pictures, would’ve loved to put a face to all these places, especially the Sunset in Boabab Avenue.

Hey Medha, I flew from Dubai to Nairobi then to Madagascar but it was part of a trip. Did you flick through the gallery at the top of the page, there’s 18 photos of all the lovely places I talk about in my blog. Hope you take a look through and let me know if you think I should upload more, feedback is always welcome 🙂

I like the picture with the trees. It is almst done with one color. looks so surreal 🙂