Tsingy de Bemaraha Strict Nature Reserve is a must-see on a trip to Madagascar with the unusual ‘forest’ of limestone pinnacles and a wealth of wildlife, flora and fauna.

This unique protected UNESCO heritage site is located in the Melaky region, northwest Madagascar. The Tsingy de Bemaraha Strict Nature Reserve covers 666 sq km comprising of karstic needle-shaped limestone formations and has four different circuits you can follow. You’ll find around 650 different fauna and flora species here, 85% of which is endemic to Tsingys de Bemaraha. The park is home to many animal species including 100 types of birds, 60 types of amphibians and 11 types of lemurs to name but a few.

The word ‘Tsingy’ is indigenous to the Malagasy language means ‘walking on tip toes’ or ‘the place where one cannot walk barefoot’ demonstrating how sharp they are to touch. To reach the area, we drove from Belo and crossed the Tsiribhina River by loading the 4×4’s on the ferry, three at a time. Bear in mind, the ferry stops running at 6pm when planning your trip.

On arrival, we were introduced to our guides Deepo & Tivi who gave us a briefing on the rules for the park. As it is considered a sacred place, you cannot point, no smoking and ask the guide if you need to pee, they will tell you where you’re allowed to.

Next, we were fitted with harnesses for the via ferrata on our trek. The trail is only 3km but does take around 4 hours to complete with the climbing up rocks and tricky manoeuvres under the razor-sharp rocks. The infrastructure created with fixed cables, ladders and bridges was excellent and felt safe at all times.

The narrow suspension bridge was 200m above the ground, it says only one person at a time, I wasn’t going to risk doing otherwise. On the other side, the view of the landscape of limestone pinnacles was simply breath-taking.

This was a bit more leisurely that than big circuit, no harness required! Following a short stroll through the forest, we were greeted with a labyrinth of narrow walkways we had to shuffle down to pass.

Within the hole of a tree, we spotted a Sportive Lemur peeping out which was a lucky find considering they are nocturnal, he just looked straight at us but they are so-called because of the boxing-like stance they assume when threatened. We could hear the tweeting of the Madagascar Bulbul and the Vasa Parrot. Out of nowhere, a Malagasy ring-tailed mongoose darted across our path, think the nosey tourists was too much but he was easily recognisable by his bushy, ringed tail.

We crossed wooden walkways seeing huge spiders in webs glistening in the sun and smaller baobab trees nestled into the rocks. We climbed metal ladders to reach the viewpoint displaying the magnificent stone landscape into the distance. These rocks not only look amazing but they’re musical too, when you tap them they make a sound like tapping metal owing to the fact that they contain magnesium. 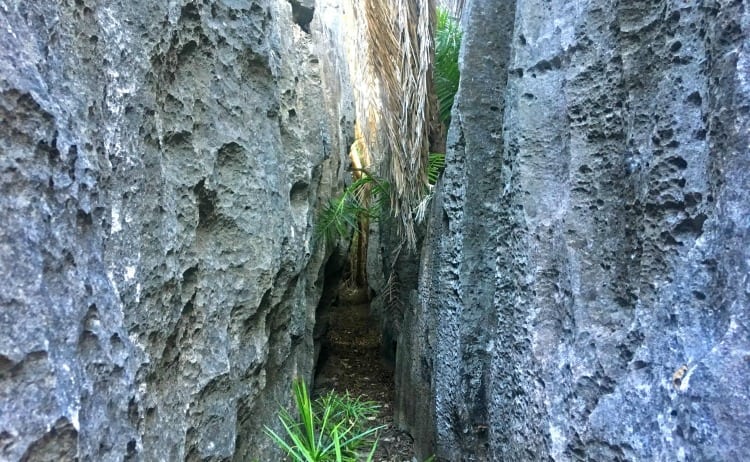 Our parting gift was the sighting of a rare Malagasy fish eagle sat high up in the tree, a program has been launched in Antsalova region to increase the number of individuals up to 250 so you can understand how endangered they are.

The Tsingy de Bemaraha Nature Reserve is closed in the rainy season as the water rises to around 10m bringing in the crocodiles and making it impossible to cross the river so head there between May and November. Expect to pay 55,000 Ariary to enter the park.

Nearly half of all of chameleon species are from Madagascar so we took a drive near the hotel to see if we can spot any of these colourful lizards chilling in the trees. Contrary to common belief, chameleons change their colour to reflect their mood sending signals to other chameleons rather than to match their surroundings. They can change depending on light and temperature but they generally inhabit the surroundings to match their colouring.

We stumbled upon a few chameleons which are apparently easier to find at night with light than in the day, I’ll be honest the only time I knew we were onto something was when our driver Marc leapt out of his car to show us. Their long fingers hold onto the branches helped along by their long curly tail. They are fascinating to watch as their bulging eyes move independently from each other eyeballing all of us gawping at them. Great to see these guys out in the wild!

Day 4-5 The Summit and Descent of Kilimanjaro...

Trekking to the salt plains of Lake Assal...

Omg this sounds like so much fun! I def need to discover more about Madagascar!

Madagascar is not a country that is featured that much, so I was very interested to read this. The hike sounds fantastic and it would be interesting to see some of the flora and fauna in this park.

Wow, this sounds like a great place to explore! I’ve always been curious about Madagascar and really hope to make it there within the next couple years. Will definitely add this nature reserve to my list of things to do there!

What a fun adventure to have! Going on a chameleon hunt through Madagascar seems like something out of a movie, and something that I’d really love to do! Sounds like you had a blast and were able to spot some awesome wildlife like the lemur!

This looks beautiful! I love all the different wildlife you were able to see, and appreciate your comment that you felt very secure and safe at all times. Excellent information. 🙂

Interesting place. I do miss the days when I used to trek, when it exhilirated me to be with nature. The feeling of being surrounded by large trees and rock formations is just amazing.

I like your experience about Madagascar, not too adventurous, not too boring. Watching animals in their space is kind of fun, one would be so ‘mazed at their uniqueness. My college teacher gave me a wrong information about Chameleons, she ought to read this post😂😂😂😂

Tsingy de Bemaraha Strict Nature Reserve sounds unique and I understand that it is a World Heritage site. The Grande Circuit trek sounds like a thrilling adventure. I am sure I would love it. Good to note that inspite of dangerous limbing and terrain, the infrastructure ensures complete safety.

Love the Malagasy proverb! And 4hrs for 3km!? Wow! Must’ve been a difficult one. Definitely sounds like one heck of an adventure tho. Will add this to my list for when I visit Madagascar!

With such a wide variety of animals and birds, this place must be preserved for posterity. Madagascar should position itself as an environment destination. I hope this place retains its purity for a long time to come.