After flights from Dubai, long car journeys, and an overnight stay in Antsirabe, a two-day boat trip down the Tsiribhina River in Madagascar to kick back and relax was definitely a welcome activity (or non-activity). Waterfalls, lemurs, camping, and village life was all to come,

“Malagasy Proverb: A canoe does not know who is king. When it turns over, everyone gets wet

Our journey starts in Antsirabe

We woke up to the rain in Antsirabe, we grabbed a quick coffee and jumped on the bus for our 4.5-hour journey to our breakfast stop, we were told 3 hours but I think that’s Malagasy time. The foggy morning and wet roads soon turned into dry curvaceous valleys and blue skies. Hurrah!

The roads aren’t the smoothest to attempt sleep but I hate to miss out on seeing snapshots of local life as we drive on through. As we reached villages, the homes were adorned with the Madagascar flag to celebrate Independence Day on the 26th of June, the driver honked the horn to warn the kids playing on the roads, there were odd random pieces of solar panels trying to soak up the energy for the night time power and even dead pigs on a bus roof alongside luggage. 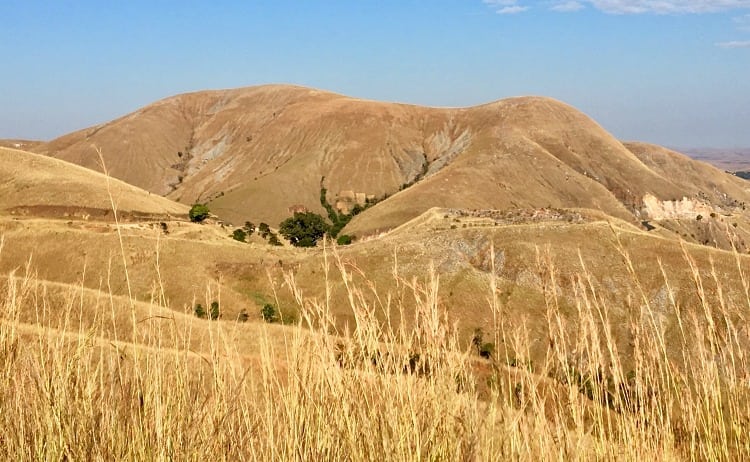 We had a stop off to check out Elephant mountain, a hill in the distance that is shaped like a mammal lying down sleeping. This is definitely the only elephant in Madagascar! The next stop was much-needed breakfast, or should I say brunch at 11 am at La Pirogue in Andapanangoy, Miandrivazo. The passports were all taken to the police to verify us before our boat trip. The kids from the village came up to see us all shouting vaza (foreigner in Malagasy, asking the smokers for cigarettes. We thought money was a better option, they were pretty excited as they ran down the street waving their 2k Malagasy Aviary in the air.

We got a few supplies of THB (Three Horses Beer is the Malagasy ale) for the boat from the shop in the town before getting on our way. The landscape became greener with many ladies working in the rice fields. Passed through a couple of checkpoints then off-road for an hour to meet the river at the village of Masiakampy. The local guys jumped on the back of the bus to help us get us and our luggage on the boat, the kids multiplied and swarmed around us shouting “vaza vaza”, this phrase will be heard a LOT over the next few days. 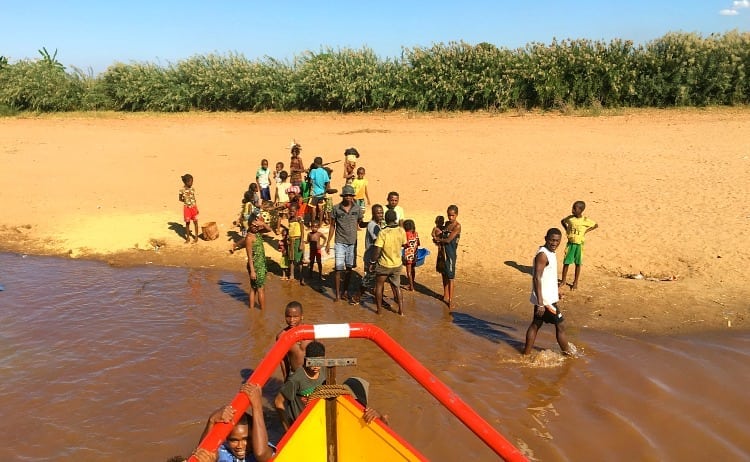 Set sail on the Tsiribhina River

As they say in Malagasy… Alefa (Let’s go!). There was lots of time to relax on the boat and say Samichara (Good health in Malagasy) with a THB. We got the low down from Nolavy, our tour guide, about his tribe called Sakalava. It is customary that the fathers eat first at the table and it is forbidden to enter your sister’s room. There are 18 tribes in Madagascar, each with their own dialect, however, there is an official ‘Malagasy’ language so they can understand each other. Being an old French colony, this language is spoken by most. If you speak French, this will help you communicate and read signage, menus, and leaflets.

As the sun was setting, we finally found our place to pitch up the tents by the river. The team served up a delicious meal and we sat chatting and listening to their amazing outburst of Malagasy melodies accompanied by a simple musical instrument – the forks! I was given lessons on how to play forks to the beat but failed miserably, not through lack of trying. It’s true what my mum said: “You really aren’t musical but I support you getting involved”.

Yoga at sunrise was just perfect, totally set me up for the day. Once the tents were packed up, we had breakfast on the boat and set sail again on the Tsiribhina River to the waterfall at Anosiampela. We were greeted with a tree full of red-fronted lemurs who were more than happy to come and say hello… and eat our bananas! A short walk in the forest took us to this hidden gem with two pools of turquoise water, one with a fabulous waterfall also known as a camping shower. 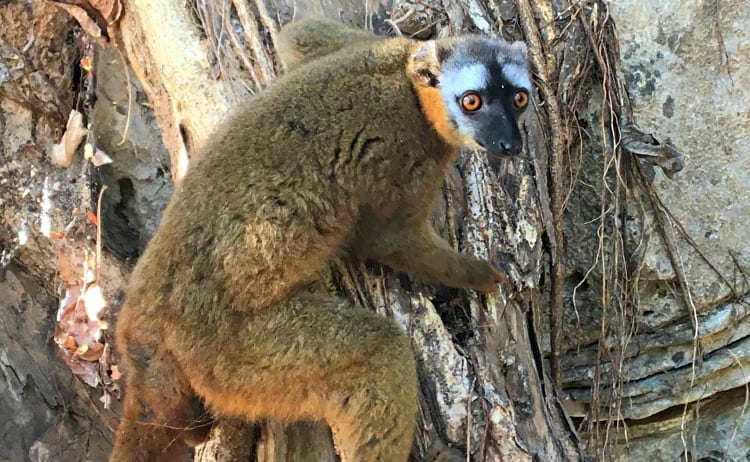 Once back on the boat, we could see crocodiles gliding along the water’s edge and groups of people washing, not next to the crocodiles obviously but who knows when one will pop up, not sure I’d be risking that one.

We carried on down the brief stopping off briefly to buy papaya and fit the kids with new outfits which were super exciting for them considering Independence Day was the following day. Between the group, we had brought a lot of items for the children in the village ranging from clothes, flip-flops, pens, notebooks, hair accessories, games, balls, and more. I noticed some of the kids had white colour on their heads, this is apparently a natural remedy for sickness, and some local ladies had yellow on their faces, this is the bark of the tamarind tree mixed with water to protect them from the sun. 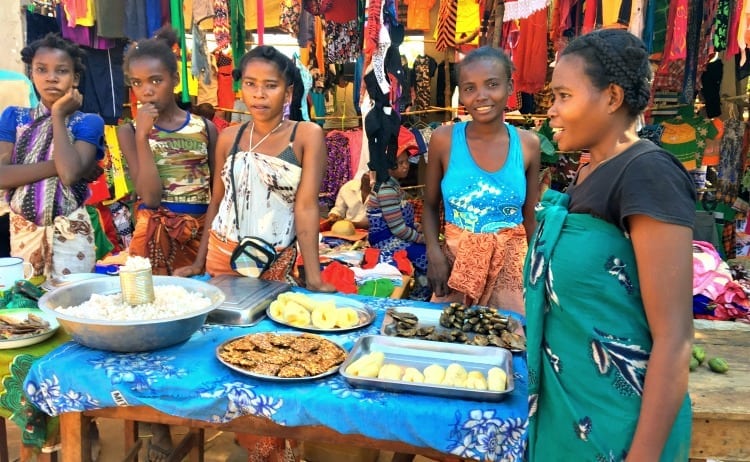 Next was a larger village, there were a LOT of kids running from miles away to see the boat full of VAZA! To avoid a riot, the kids queued up to get presents. One guy in our group brought a polaroid camera, it was a genius idea, once they realized the photo would develop, the kids and mums were just loving having a photo printed out. We felt a bit like the Pied Piper as we walked towards the market, they just wanted to hold your hand. The two girls that latched onto me, who were very sweet, were called Anna and Beatrice, thankfully I remembered some French from school to get by. 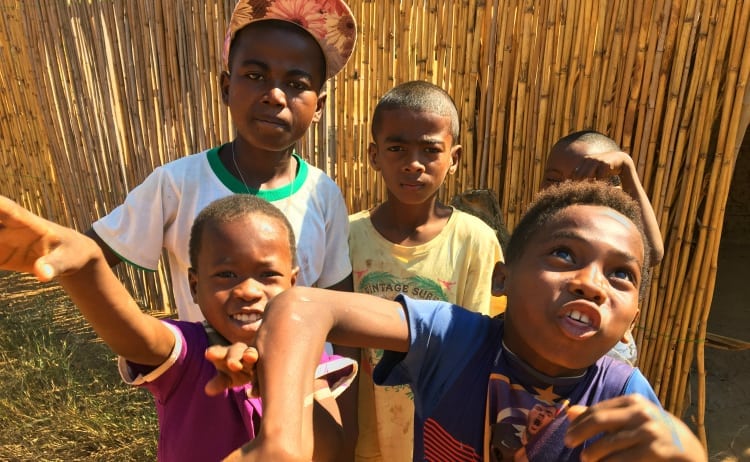 Bat caves and back to camp

The boat passed by the tall bat caves, if you looked close enough you could see bats flying around in the crevices of the rock. There was agriculture happening on the water’s edge of the Tsiribhina River with rice patches and peanut bushes, then, fortunately, we crossed a fisherman with a great catch of catfish, that’s dinner sorted then!

Our new home for the night was found on the river bank as the orange sunset shimmered on the water by a solitary baobab tree. A special effort was made for dinner that evening with ornamentally carved fruit and vegetables, and the catfish obviously! The evening was rounded off with a bonfire, live Malagasy music, and dancing. Again, I joined in but not sure my twerking is up to scratch! 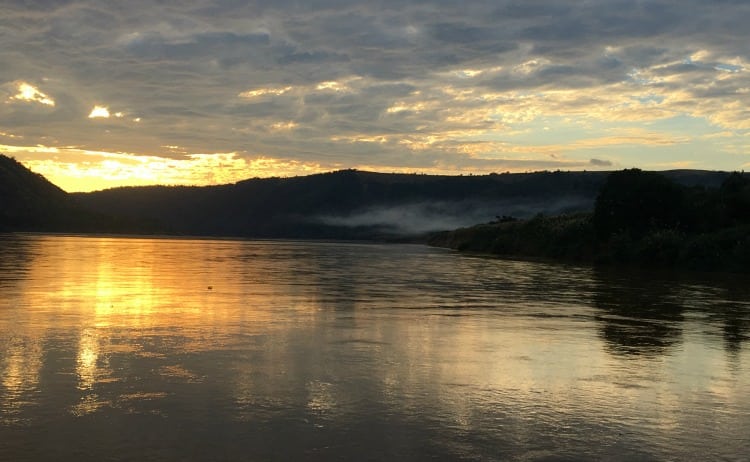 The morning of Madagascar Independence Day was a misty one. When I emerged from my tent I could see random spider webs scattered all over the sand, amazing to think how busy there were in that night. Our boat was flying the flag of Madagascar, it was in three colours, white represents loyalty, red for sovereignty, and green for green biodiversity. The boat trip finished in Belo / Tsribihina and we said our goodbyes to the crew. Our departing gift was a final local song we had heard a lot in the last few days, a beautiful send-off!

Our next chapter of the trip was heading back to dry land via Belo where we stopped off to order our lunch for our return in three days, preparation is key! The town was getting ready for Independence Day, everyone was dressing up, ladies in bright outfits and men in suits. We left the town to celebrate and we took to the bumpy roads for 4 hours to visit the Tsingy de Bemaraha Strict Nature Reserve, not a journey for the rainy season or sensitive stomachs!

DISCOVER MORE OF MY MADAGASCAR ADVENTURE; READ ABOUT THE UNIQUE TSINGY DE BEMARAHA NATURE RESERVE AS WELL AS SUNSET ON BOABAB AVENUE AND WILDLIFE IN KIRINDY FOREST. 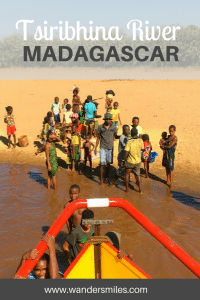 How to spend a day sailing on the Bosphorus | Turkey

What an amazing adventure! Lucky that you were there for the independence day celebrations. Sounds like a boat is a great way to see the country, great that you got to visit villages along the river and see all those adorable children.

This boat trip across river Mdagascar looks worth doing. The local culture across banks of river is too very interesting.

It was a wonderful boat trip, really enjoyed meeting the families of Madagascar along the river banks