You will find the forgotten pyramids in the ancient city of Meroë, the capital of the Kingdom of Kush, an ancient African kingdom situated in what is now the Republic of Sudan. They are on the east bank of the Nile near Shendi, approximately 200 km north-east of Khartoum.

During Egypt’s 25th dynasty (760 BC until 656 BC), Meroe was ruled by Nubian kings who had conquered Egypt. Throughout their history, the two societies maintained extensive trade and cultural ties, leading to the Sudan pyramids.

The Pyramids of Meroë have been granted UNESCO World Heritage status but are rarely visited or spoken about. Whilst the infamous Pyramids of Giza are much larger and more majestic constructions, Sudan has over 220 pyramids which are twice that of Egypt.

The Meroë pyramids, with narrow bases and steep angles on the sides, were built around 2,500 years ago, are literally a necropolis for royal burials. In Egypt, Nubian kings and queens were buried with gold, jewellery, pottery, pets, and even food.

Some of the sites of the pyramids around Karima (Kingdom of Napata) are in a state of disrepair, some of the bricks are being used by locals to build their houses but the Meroë site is slowly being restored. I just had to see them for myself. We visited a smaller burial site for the more common folk of the Kushite Kingdom. Unlike the Egyptian counterparts, pyramids were not only built for royalty and the upper-elite of society.

RELATED: 8 AMAZING THINGS TO DO IN KHARTOUM

Camping by the Pyramids of Meroë

To see the Pyramids of Meroë at sunrise the best option is to set up camp right next to the site as you need to up and ready by around 5.45 am. This to me is the only way to see the pyramids, you are guaranteed to have the site to yourself at this time giving you perfect photo opportunities. The beautiful golden glows on the pyramids and the desert that change, as the sun comes out, are simply magical. Breakfast was only a short walk back at the camp so we could refuel before heading off to see the Royal City and the neighbouring archeological digs. 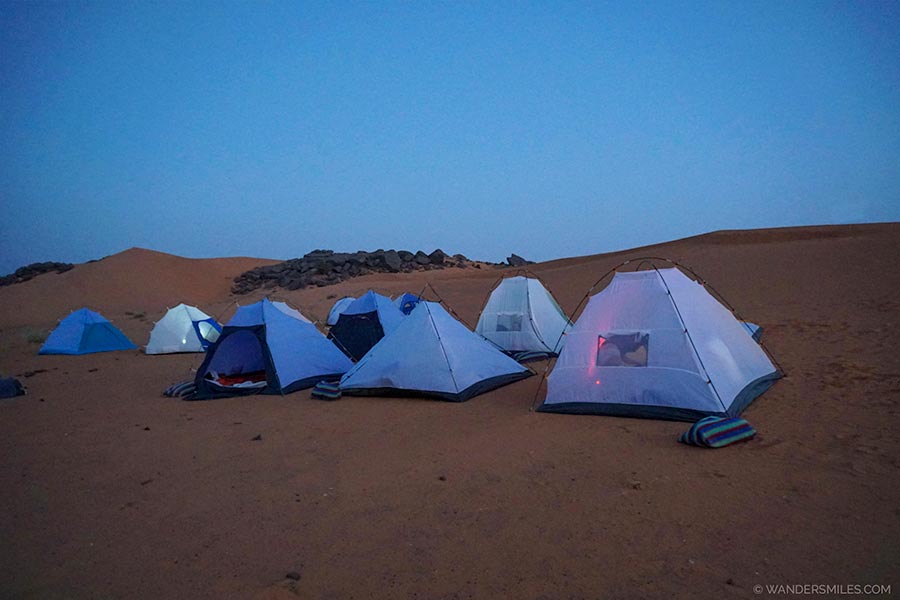 Camping by the Pyramids of Meroe 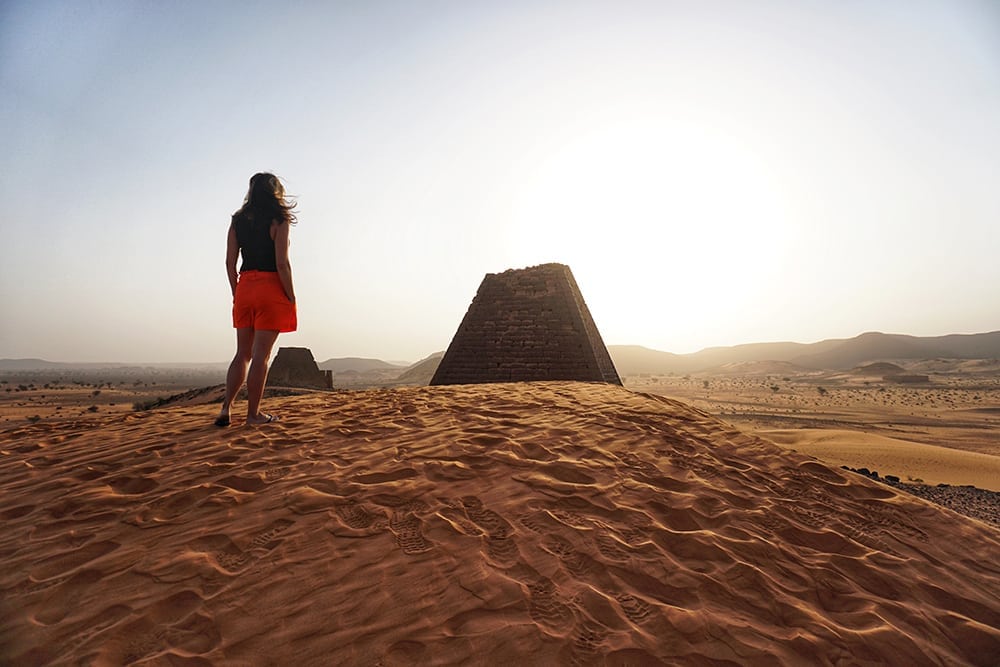 Tips before you go to the Pyramids of Meroë

Not all companies will cover Sudan so it is worth checking what level of cover for the regions you will be travelling to.

BATTLEFACE covers all destinations up to the age of 59 years. CLICK FOR QUOTE

IATI INSURANCE covers all destinations with a range of packages to suit your budget. GET YOUR QUOTE WITH 5% DISCOUNT

Great tips for a country not many have visited yet, hoping this will change soon! The Sudanese are amazing people!

This is a dream destination for me! It looks so gorgeous. I’m hoping to get out there later this year!

This looks like a beautiful place to visit! And it’s so nice to read about a new place that not many people have seen either. Good tips on what to wear; it’s important to be respectful of their culture.

This is a good piece of information about destination with pyramids and camping site. Thanks for sharing.

Very interesting! I never read anything about thithis before. Intriguing. I will certainly consider it for a future adventure.

Ii love the pictures and rhe story along with them, i went to egypt years ago but decided not to see tthe pyramids as we were told they are jist rammed with tourists, i like the idea of your camping trip to see them, might be fun with the kids in a few years too

You captured the pyramids well so it was worth getting up at 5:45 in the morning. Plus you gave great advice about getting your supplies ahead of time, otherwise you would be out of luck.

We will definitely share this on Egyptian Sidekick. Fantastic post! It’s too bad the Sudan is so under the radar. If they would only invest a little more in tourism and tourism marketing, they’d have a thriving sector. These pyramids are amazing, and it would be great to do the sites even over a few days. Love it!

Cool, thaks for sharing something new. I have never heard about the pyramids in Sudan. You have a picture with locals, are they guides?

Add me to the list of people who just learned today! I had no idea that there were pyramids in Sudan nor have I ever heard of Meroe before today. I dont think I could wake up for the AM sunrise more than once as I am sort of a night owl. Does the sunsets offer just as pretty of pictures?

Unfortunately due to issues with road controls we were kept waiting for many hours so missed the sunset but I’ve heard it’s just as stunning.

Great posts, great pictures and… great place Vanessa! I would really want to discover more of Africa one day so your article is both informative and interesting. I’m waiting for more!

How did you get to Khartoum in the first place? I checked all the flight websites and there’s almost nothing.

We flew from Dubai to Khartoum with FlyDubai – takes just under 4 hours.

Definitely never heard of these before! Learned something new. Question: why are the Cairo pyramids “infamous”??