With the weather starting to cool down in the UAE and the chance of seeing the shooting star from the Orionid meteor shower, camping in the desert was only way to spend the weekend. We took a girls road trip from Dubai to camp by Fossil Rock in Sharjah then head to Wadi Shawka the following day.

What is Fossil Rock?

We were 3 ladies and a wolf dog on this trip and our chosen spot was by Fossil Rock in Sharjah, officially called Jebel Maleihah, around one hour drive from Dubai. Fossil Rock is so-called due to the abundance of marine fossils that can be found on its slopes. This area is rich with the fossils of shells and small sea creatures that were on the ocean floor millions of years ago when water covered much of Arabia. These were created when limestone formed around their shells to make a mould, which then solidified to leave a perfect imprint.

It seems Fossil Rock is a favourite spot for the local dune buggy and 4×4 drivers so you can expect the constant revving of engines to be heard in the distance, probably not the best camping location if you’re seeking a noise-free getaway from the city of Dubai. 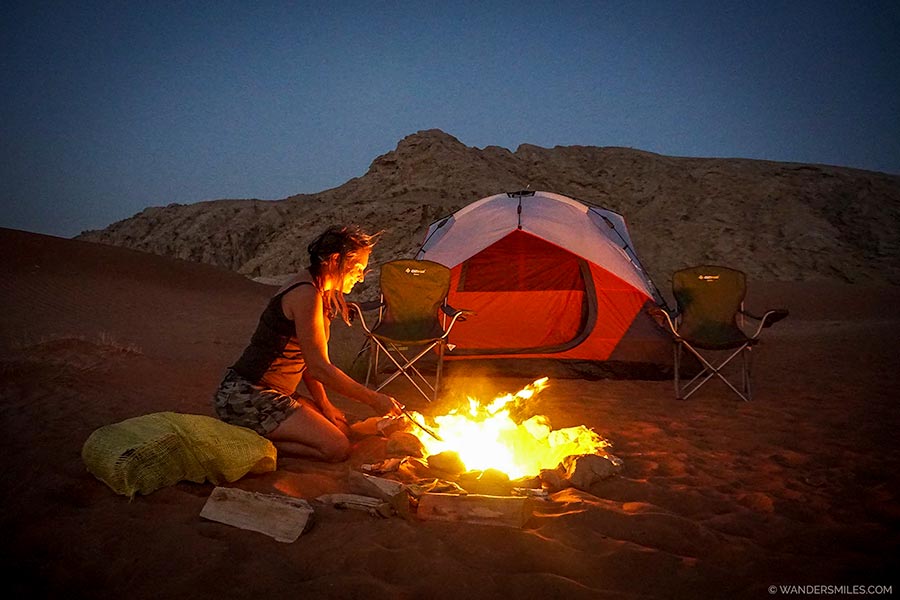 It was nearly sunset so it we had to quickly unpack the car to get the tents up. Thanks heavens for the easy to pitch tents that take less than two minutes to pop up and put the sand pegs in, happy days! This still gave us time to practice our archery skills with the bow and arrow before it went dark.

We built the fire to cook our mushrooms and Arabic pitta bread, simple but tasty. We laid back to patiently wait for the Orionid meteor shower. Unfortunately the peak was the following night but we were lucky to see some flashes which are the rocky debris left behind by Halley’s Comet. The sky is always clearer in the desert away from the city, it is so calming to get lost in gazing at the various constellations.

We woke up at the crack of dawn, there is something very magical seeing the desert at sunrise. One piece of advice I have for you, if you ever go camping with a wolf dog I recommend you take your shoes inside the tent as I guarantee they won’t be fit to wear again! The tent came down as quick as it went up which made packing up super easy. 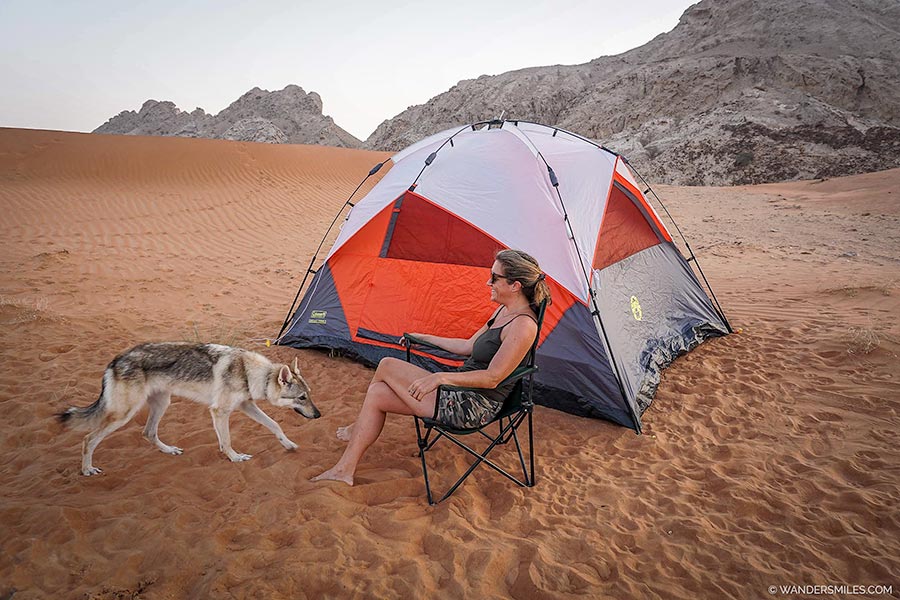 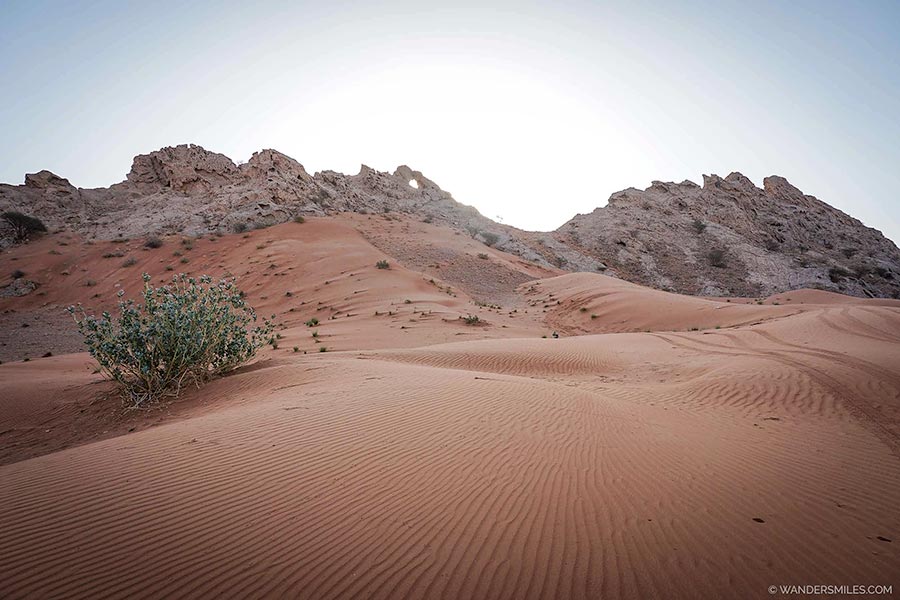 Driving through the desert to the main road, a large group of camels trotted towards us. The wolf dog had refused to get in the car and was running alongside the car, there was a nervous moment as they checked each other out. Bang, they got on like a house on fire! Glad he’d jumped in the car when we drove past the feral desert donkeys though! 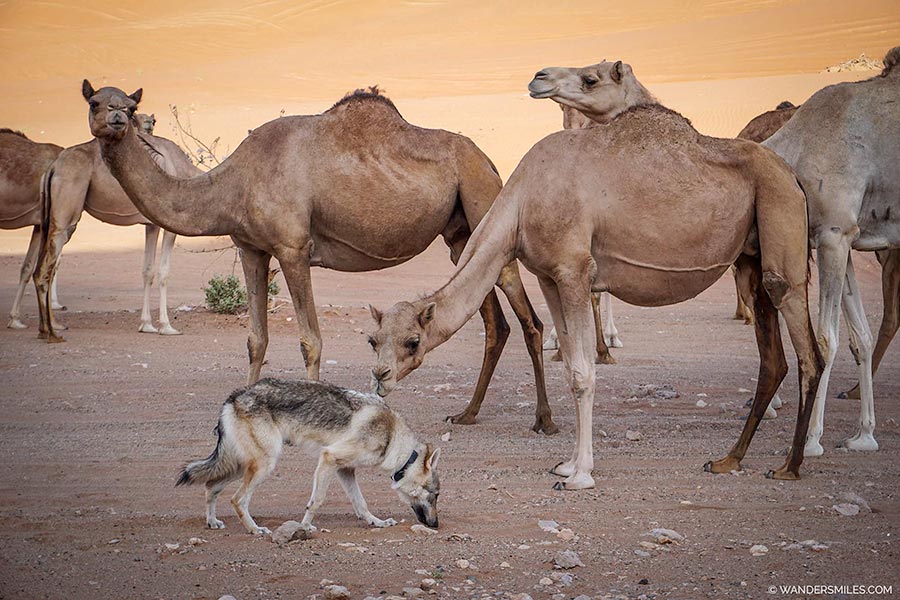 Thought an early morning hike would be just the ticket so went to explore Wadi Shawka on the eastern exteriors of Ras Al Khaimah bordering Sharjah. Unfortunately, there was a lack of water due to an extremely long and hot Summer. If you’re looking for a longer hike, you can walk the 10km around Shawka Dam. We had to get back to Dubai but we were happy to have a little scramble up the wadi and a gentle stroll in the beautiful outdoors. Much more of this to come in the UAE now Winter is here… 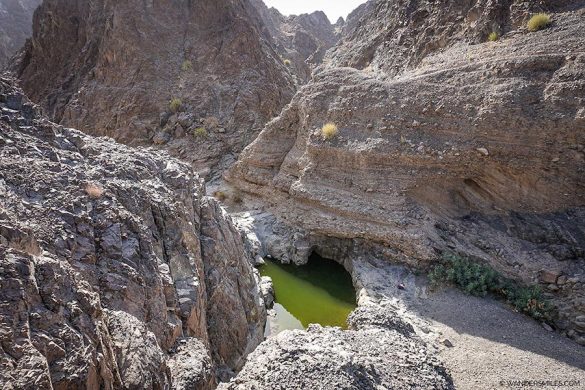 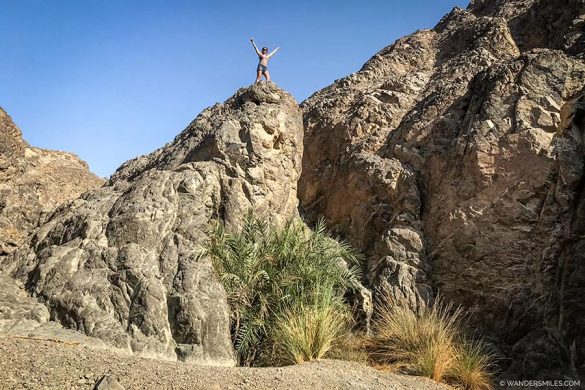 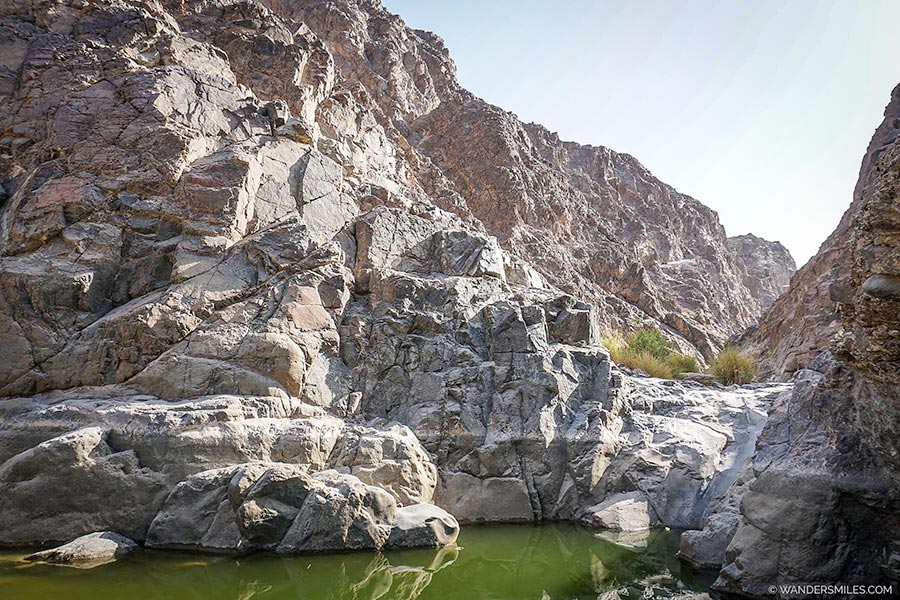 How to get there

DUBAI TO FOSSIL ROCK: Journey takes around 1 hour depending on your starting point in Dubai. Take the Sharjah-Kalba Rd/E102/S116

CAMPING GEAR: Easy pop-up tent, sleeping bag or sheet depending on time of year, pillow or blow up mattress for comfort and foldable camping chairs. If your car can’t get too near your camping spot, a beach wagon is a fabulous idea to easily shift your stuff!

COOKING EQUIPMENT: Campfire grill grate, kindle (not often much around in the desert), lighter (for an easy life) and lots of delicious food to pop on the grate!

ESSENTIALS: In case of emergencies, take extra water and power bank to charge up your phone if you need to call for assistance. 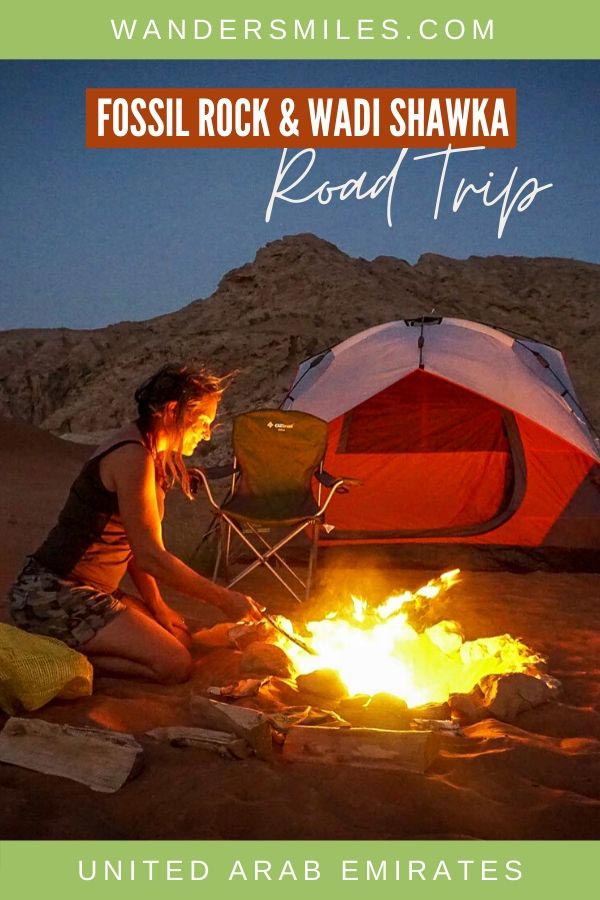 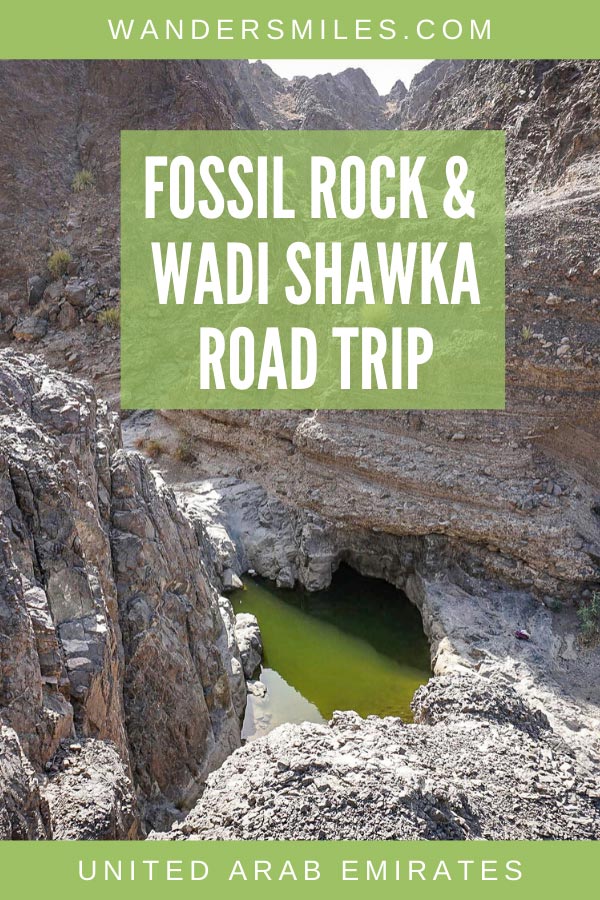 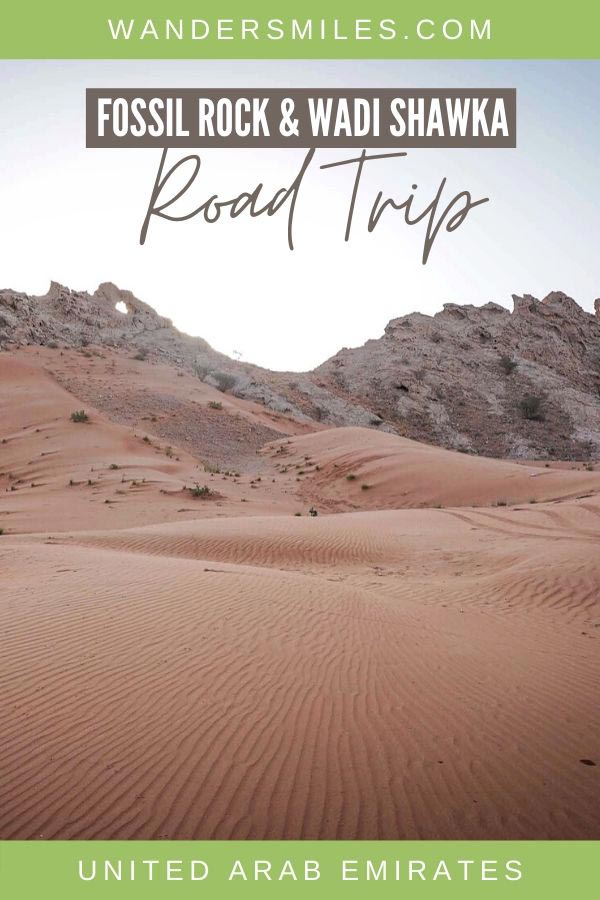 6 incredible things do in Qeshm | Iran

Sounds like I need to visit UAE again pretty soon and for longer than a layover for a change!

You’re always welcome, so many adventures to be had in the desert!

Had a few many a while ago, would be good to have more with a wiser mind…

Sounds like a pretty great alternative to your derailed plans! We’d love to camp in the desert 🙂

Yeah I agree and India isn’t going anywhere. Camping in the desert is so much fun, very different to camping in the UK where I’m from, you’re never sure if the heavens will open or not!

Hi Vanessa, I want to ask how far the fossil rock to wadi shawka?

Hi there, it is around 30-40 minutes drive. Will you be camping?

Hi Vanessa, do you need a 4×4 to get to these locations?

Hey Alison, You would need a 4×4 to get to Fossil Rock but you can reach the Wadi Shawka with a normal car and then starting hiking. Let me know if you need any more help, otherwise, enjoy your adventure!

Devastated to see fires on Mount Kilimanjaro. I hope they manage to contain it soon 🥲 #KilimanjaroFire https://t.co/S2mNJoeeg3

Reply Retweet Favorite
How much would I LOVE to win this 😍🦁🦒 https://t.co/6xCmOjXb0y

Devastated to see fires on Mount Kilimanjaro. I hope they manage to contain it soon 🥲 #KilimanjaroFire https://t.co/S2mNJoeeg3

Reply Retweet Favorite
How much would I LOVE to win this 😍🦁🦒 https://t.co/6xCmOjXb0y