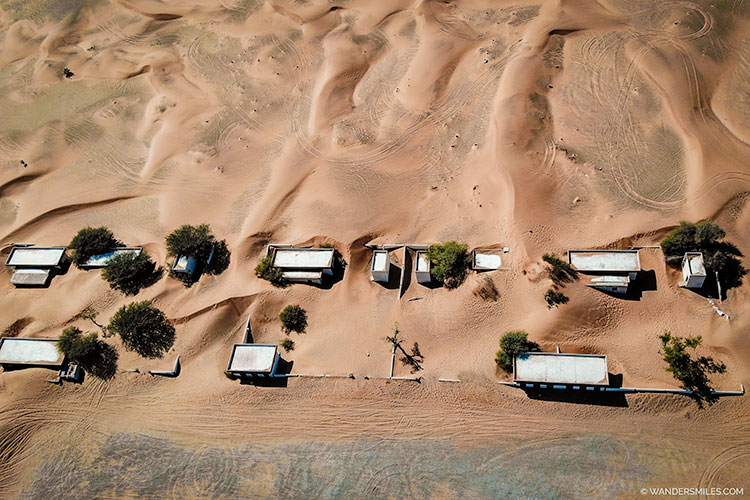 Have you heard about the abandoned hamlet near Sharjah? The buried village of Al Madam is a cool place to explore if you are in the United Arab Emirates.

What you’ll find at Al Madam

The settlement of Al Ghuraifa Village in the region of Al Madam has two rows of houses, some painted blues, greens, and yellows inside, some ornately decorated with mosaic, and one has a wallpaper landscape on one wall. All of the ghostly-looking houses have been drowned in the dunes swept across the desert by the wind. There is a mosque built at one end with a tattered green carpet where the inhabitants would once have prayed.

The mystery behind the buried village of Al Madam

The ghostly village was built in the 70s and, according to the locals, it was habited by the Kutbi tribe, one of the most known in this area of Sharjah. They also say that it is haunted by the jinns, is this why they left? Who knows?

Stories from inhabitants of Al Madam

There are many tales from the residents of Al Ghuraifa Village who recount happy memories, much less sinister than the ghostly version.

Sultan Muhammed Muadid Bin Howaiden, Head of the Municipal Council, says the Al-Ketbi family were the first to inhabit in 1980 and remained until 1994, however, it was exposed to remarkable winds causing the sand to fill their homes, the residents finally moved on in 1995.

Umm Muhammad, citizen of the Al Ghuraifa, says: “I spent my first years in the village, and considered it a source of safety in everything that I encountered at the beginning of my marriage, as according to customs and traditions we get married in the family home. I remember my childhood in the village with one of my friends, we were hiding in her house as it was bigger than mine, we spent time laughing and chatting, and this is the case for everyone here.”

She adds “I live close to the village, and mothers tell their children about the fairy mother, “Dois”, which belongs to horror stories, and that she is hiding in the buried village, which is a terrifying and frightening legend, which tells about a beautiful woman who puts on beautiful perfumes and walks on the roads to lure her male victims, and then kill them.”

Rashid Khalfan al-Ketbi, one of the people of al-Shaabiya, said: “We used to gather all the residents of Al Ghuraifa on occasions at the hospitality of one man with five heads of sheep, women make food, and we all gather together, men eat at one table, women and children at another. Everyone gathered together, all good people, all children of the Emirates who welcome the guests with love.”

How to get to Al Madam

This eerie ghost town is on the E44 around 60km from Dubai and 50km from Sharjah. No public transport will take you there but a taxi would be a good option, just make sure you have data to access Al Madam on Google Maps in case your driver isn’t sure. There are some impressive dunes around there if you want to combine your day with some off-roading.