8 Amazing Things To Do In Khartoum

With a population of 5.8 million, Khartoum is the second-largest city in North Africa so you can expect a bustling atmosphere. It is believed that the name Khartoum in Arabic means ‘trunk’, most likely referring to the narrow strip of land extending between the Blue and White Niles. The Nile splits Khartoum into three cities – The downtown business district, Omdurman (west bank), and the Khartoum North. Take a couple of days to take in the sights and find the top things to do in Khartoum.

BEST THINGS TO DO IN KHARTOUM

Stand at the confluence of the Nile

The two major tributaries of the river are the Blue Nile and White Nile. Flowing down from Lake Victoria, Africa’s biggest lake, the White Nile flows north and is thought to be the source of the River Nile. It runs through Tanzania, Uganda, and South Sudan, and the basin is Rwanda or Burundi. The Blue Nile starts in Lake Tana, Ethiopia, and flows south then northwest to Khartoum.

There are a few spots to see this momentous phenomenon, we stood at Al Mogran Family Park not far from the Sudan National Museum to watch the confluence of the Nile, known locally as Al Mogran. You can see the two distinct colours of the Blue and White Nile, however, this is not reflected in their names. In reality, it is two hues of mud determined by the silt swirling around until they are mixed together at the confluence to form the almighty River Nile, the world’s longest river or the father of African rivers then runs down to Egypt. 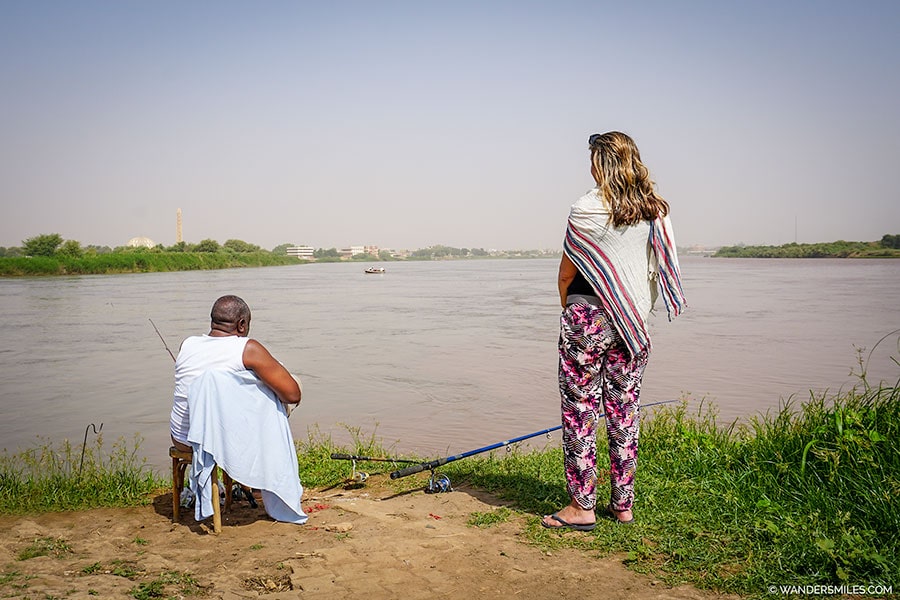 Confluence of the Nile, Khartoum

Delve into history at the Sudan National Museum

You will be surprised at the wealth of artifacts displayed at the Sudan National Museum both indoor and in the gardens covering all periods of Sudanese civilisation from the stone age to Islamic, Nubian and Christian monuments.

The indoor museum houses two floors, the lower one covers the kingdoms of Kerma, Kush, and Meroe. It was amazing to get some historical insight before I headed out to visit the forgotten pyramids of Meroe. Unbelievably, some of the ancient artifacts are uncovered so you get to view them in all their glory.

The upper floor houses frescos from Christian Nubia depicting Christ and the Virgin Mary, along with a host of archangels, saints and apostles. Many were painted between 8th and 14th centuries taken from Faras Cathedral and Old Dongola churches to name just a couple.

On the grounds of the Sudan National Museum are structures that display tombs and temples submerged under Lake Nasser. Discover the tomb of the Nubian prince Djehuti-hotep at Debeira and rescue temples such as Buhen Temple, Temple of Kumma, and Temple of Semna.

A visit to the Sudan National Museum will be the perfect place to immerse yourself in Sudanese history. It is well laid out and informative, well worth spending a couple of hours there. 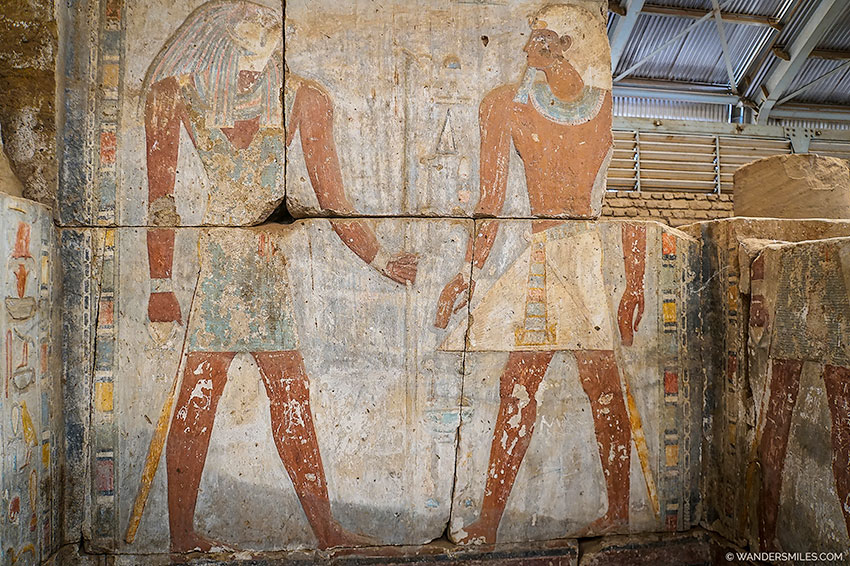 I stayed in the Acropole Hotel, the oldest hotel in Khartoum which has been frequented by many celebrities and NGO’s. The simple hotel was opened in 1952 by a Greek couple who fled from the poverty in 1944 caused by WWII. The gallery of photos in the lobby document the history of time as they have watched Khartoum evolve through wars, protests, coups, and famines. 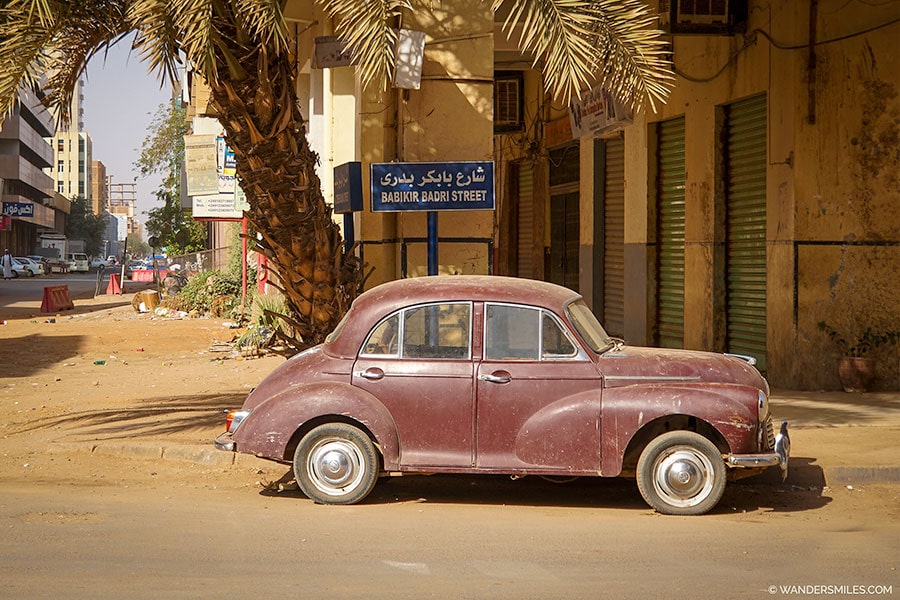 Located in Omdurman is Khalifa House Museum which houses a range of weapons, artefacts such as General Gordon’s chair. The house belonged to Kalifa Abdallahi ibn Muhammad also called Al Khalifa who succeeded Mahdi as leader of the Sudanese uprising in 1891. As well as a residence, it was also the headquarters of the administration of the Mahdi State and was made into a museum in 1928. 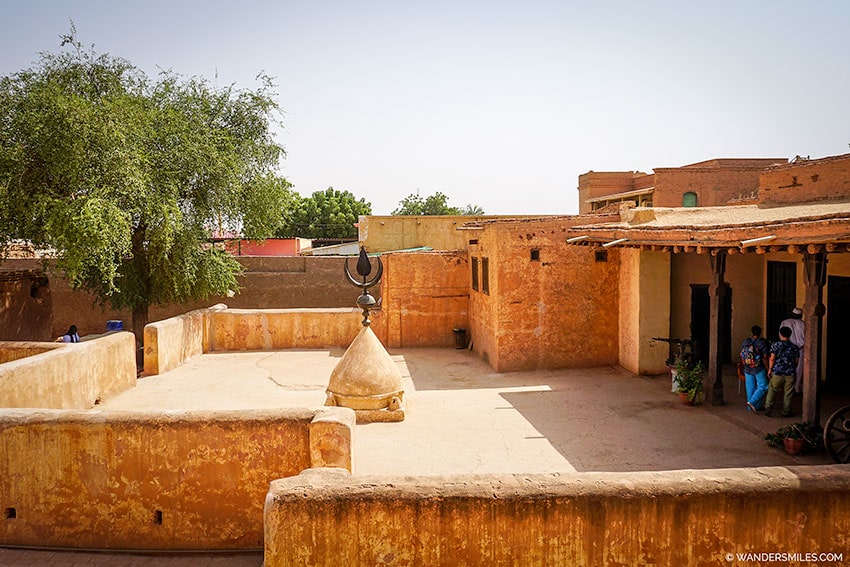 Museum of the Khalifa’s House, Khartoum

The Tomb of Muhammad Ahmad (Madhi) in the city of Omdurman serves as his resting place. Madhi’s mission was a fundamentalist Islamic leader whose campaign included the capture of Khartoum and then established a theocratic state in Sudan, with its capital at Omdurman.

Mahdi died of typhus in 1885, only 6 months after the capture of Khartoum. His body was entombed in a silver-domed mosque which was completely destroyed by British General, Kitchener, in the Battle of Omdurman in 1989. Mahdi’s body was burned in the fire and his ashes were thrown in the Nile. Madhi’s son had the mosque tomb rebuilt in 1947 in his memory. Today, Sudanese Muslims hold Madhis’ Tomb as an important place of pilgrimage.

Foreigners are allowed to visit in the correct, respectful dress. The interior is quite understated compared to the exterior. The men praying gave us a welcoming smile ushering us to be seated. Outside a man played the tambourine and sang with real passion. 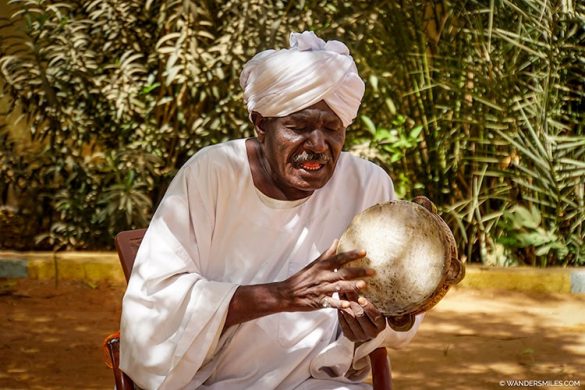 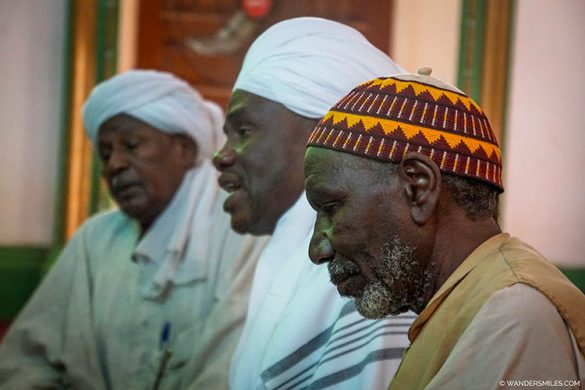 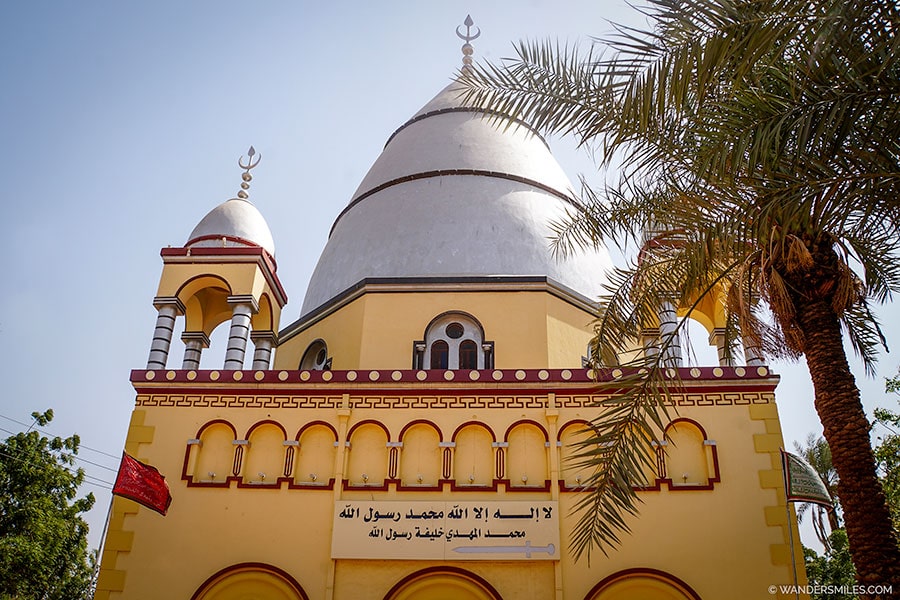 Omdurman is the most populated city in Sudan and Khartoum State, lying on the western banks of the River Nile, opposite the capital, Khartoum. Souk Omdurman dates back to the 19th Century and houses thousands of shops and stalls for locals and tourists alike.

Whilst you can buy all everyday items, Omdurman Market is famous for traditional products by skilled artisans of silver, gold, and leather. You will find the traditional dress, spices, and Sudanese folk memorabilia and get a real glimpse into the hustle and bustle of life in the city. 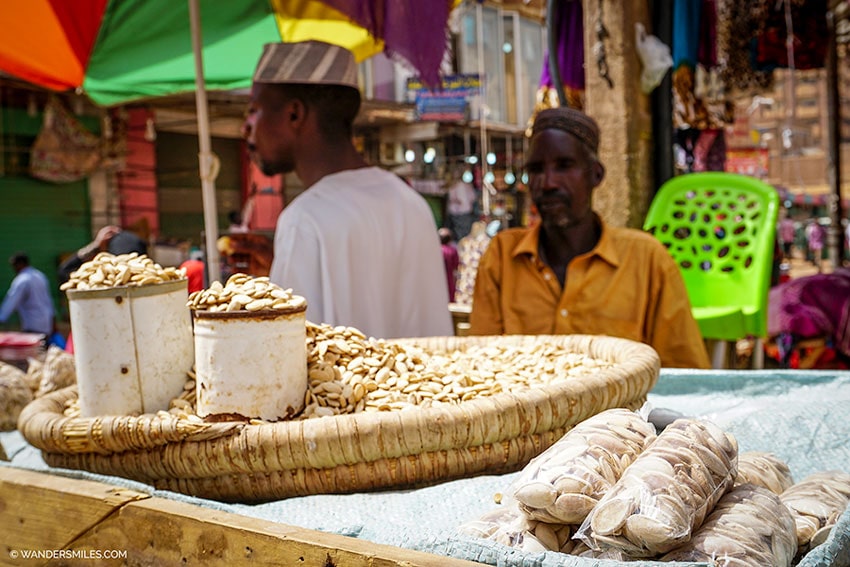 Watch the sunset on the Nile

There’s no better place to see that life in Khartoum revolves around the Nile than by taking a boat ride along the river at sunset. Glide past families with picnic tables sitting on plastic chairs laughing and paddling at the water’s edge, guys playing football, fishermen bringing in their catch, and kids splashing around. Life on the Nile at sunset is a fabulous people-watching activity! 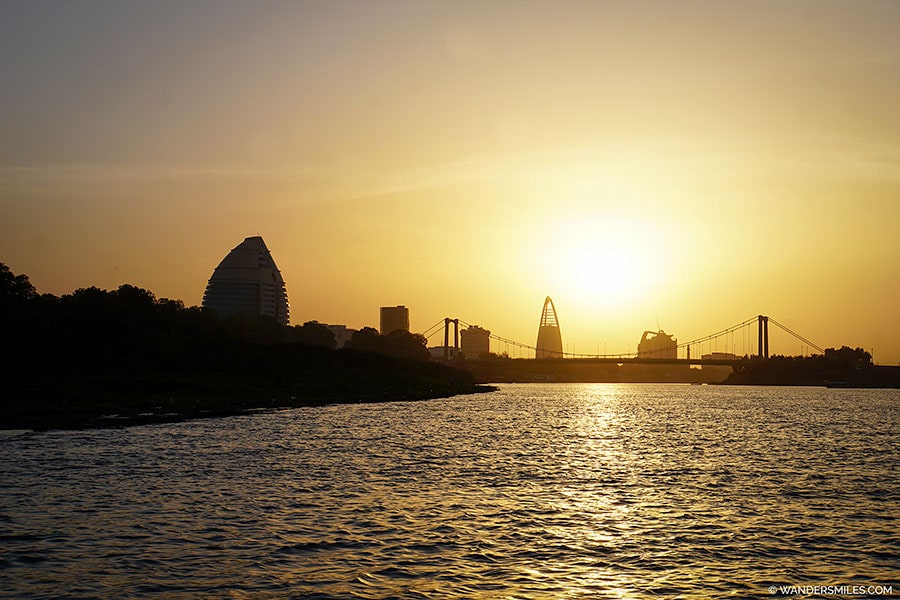 Sunset on Nile in Khartoum

The Burj Al-Fateh is an iconic 5-star Corinthia Hotel located in the business district. Opened in 2008, its’ iconic shape adds a new dimension to the skyline in Khartoum. It has been dubbed the ‘Egg Building’ but I feel it is more reminiscent of a fat Burj al Arab in Dubai!

Take in the tremendous 360 views whilst sipping tea at Burj Al-Fateh. It overlooks Tuti Bridge, the meeting point of the Blue Nile and White Nile, and the city of Khartoum. 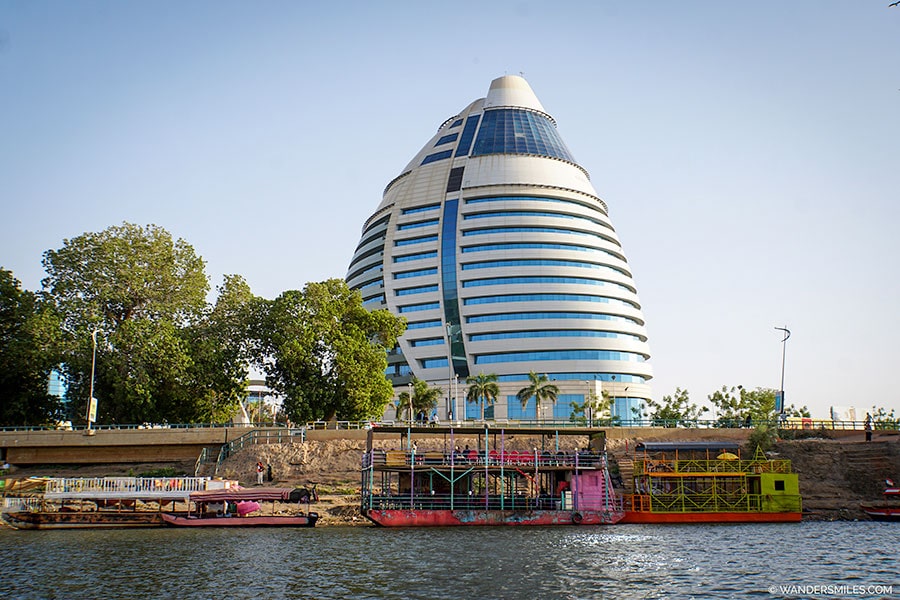 Petty street crime is low due to the military presence but it does happen so best to be alert and keep your belongings safe.

One of my visits to Khartoum was a period of political uncertainty, civil disobedience and incidents of violence against peaceful protestors making Omdurman Market was a no-go area! Omar al-Bashir was removed as President in April 2019 and now a civilian-led transitional government is in place. Sudan is in a period of transition towards elections in 2023.

Not all companies will cover Sudan so it is worth checking what level of cover for the regions you will be travelling to.

IATI INSURANCE covers all destinations with a range of packages to suit your budget. GET YOUR QUOTE WITH 5% DISCOUNT

How to get a visa for Sudan

If your country has a Sudanese embassy, you can obtain a visa but check what is required as each may have different rules. Generally, an LOI (Letter of Invitation) will be needed by a Sudanese sponsor. An LOI can be obtained by the tourist company or some visitors have got one from Acropole Hotel.

All visitors must hold passports valid for a minimum of 6 months from the arrival date. If you have the LOI, some passports can obtain a visa on arrival.

Useful links for your Khartoum trip

Ready to get planning and check these links for visiting Khartoum in Sudan. 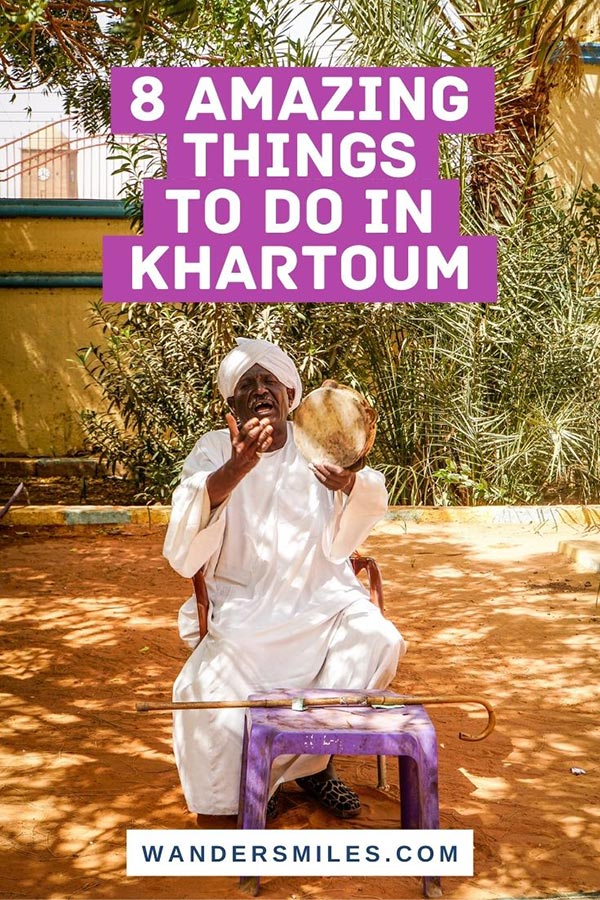 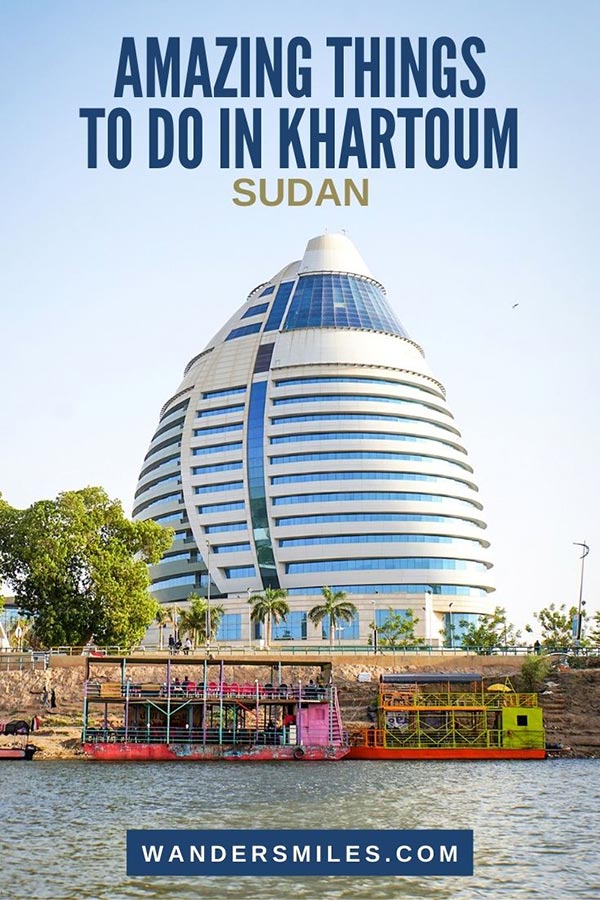 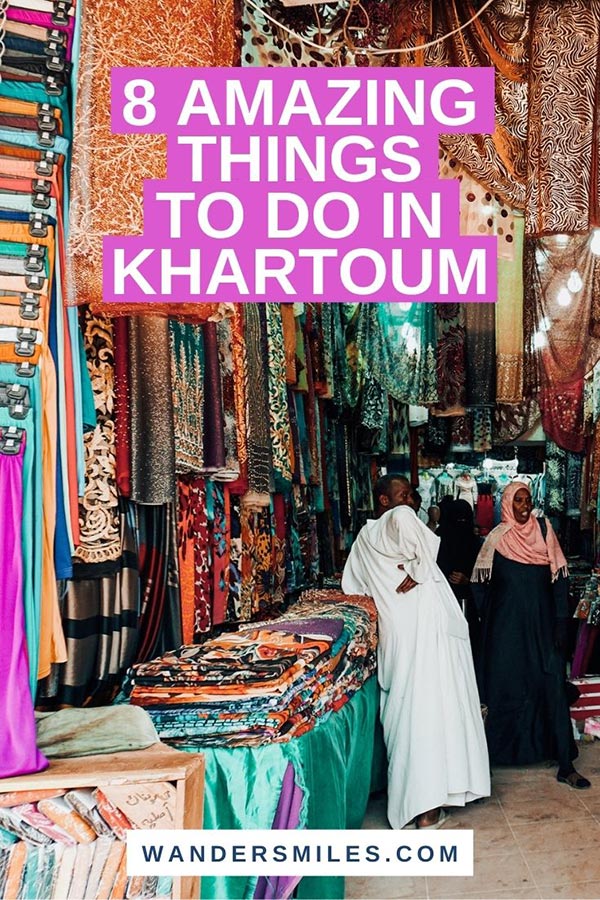