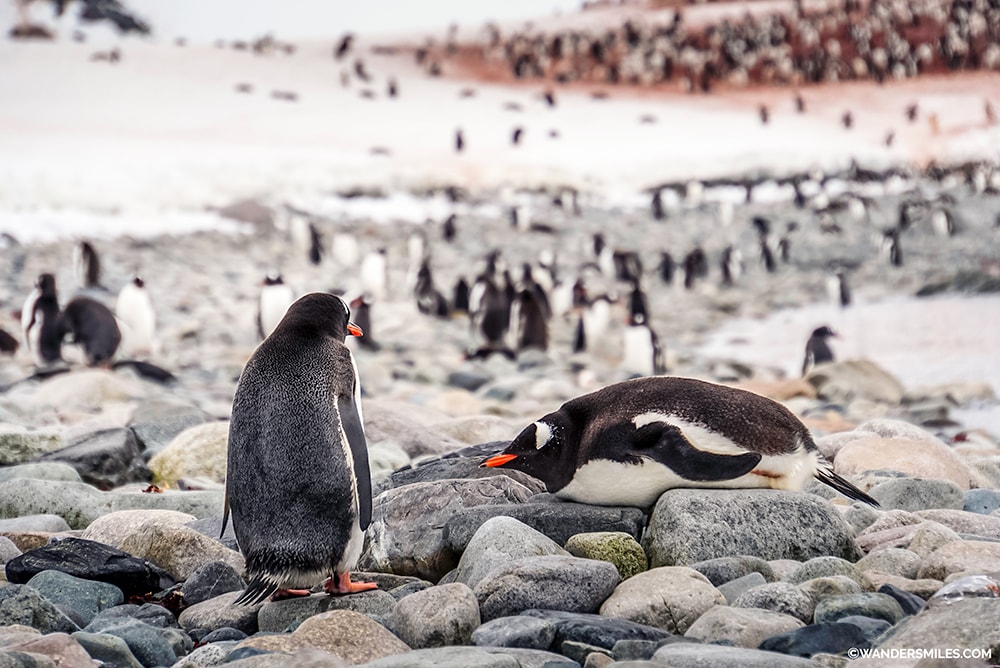 Cuverville Island is home to the largest colony of Gentoo Penguins on the Antarctic Peninsula with over 5,000 breeding pairs. This small island lying in the Errera Channel is only 2km by 2.5km in size. It’s a steep-sided dome, two-thirds of which is covered by a permanent ice cap. Watching the Gentoo Penguins on Cuverville island at the breeding time was fascinating as they make nests, fight over rocks and slide into the water to go foraging. This experience is a wildlife lover’s dream!

Why was it called Cuverville Island?

The Belgian Antarctic explorer Lt. Adrien de Gerlache discovered the area of the Gerlache Strait, Cuverville Island got its name from J.M.A. Cavelier de Cuverville (1834–1912), who was a vice-admiral of the French Navy. 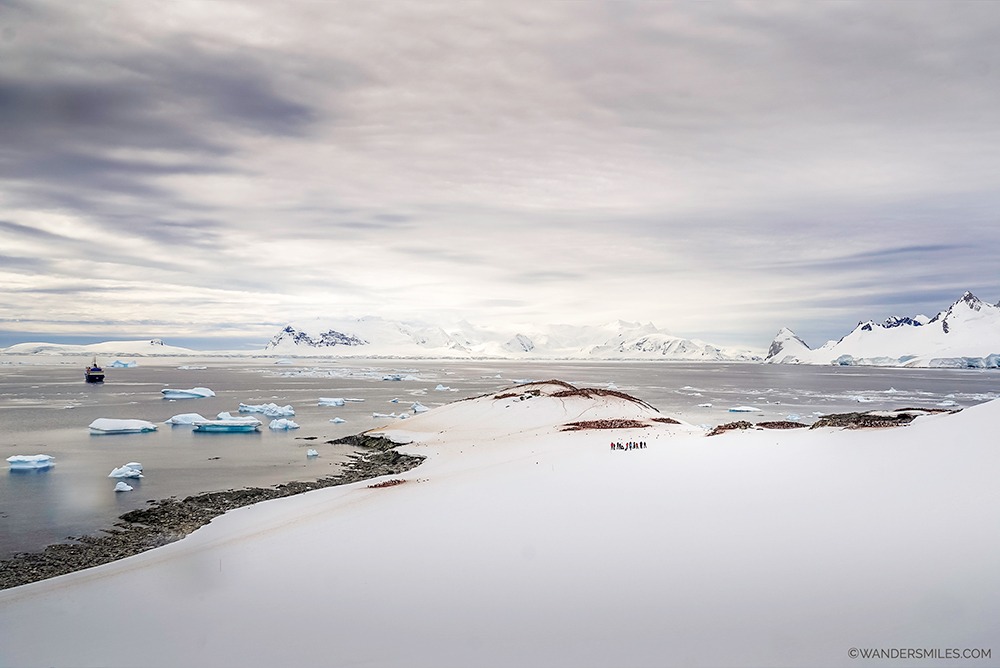 Our visit to the snowy spectacle of Cuverville Island at the end of November was timed with the season of breeding and incubation of the Gentoo Penguins. Although the males are a little bigger, it is tricky to tell them from the females with very similar markings and colours. Both parents will share incubation duties which last around 35 days.

Gentoo penguins (Pygoscelis papua) use nesting materials ranging from pebbles and moulted feathers in Antarctica. We saw many Gentoos carrying single pebbles one by one to the nest along the penguin highway!

During courtship, the male will present the female with a pebble as a gift. If the female accepts the generous gift, they bond and mate. Because they live on the frozen, barren Antarctica coast, pebbles can be scarce and hard to find. Often, these penguins are notorious for stealing each other pebbles and fighting ferociously over these precious little rocks.

Once the Gentoo Penguins have mated, the female will lay 2 eggs and with seabirds like skuas ready to steal eggs, it works in their favour that they produce more eggs than other penguin breeds. Gentoos are known to head out into the ocean to forage around 450 times a day but that leaves them open to predators such as seals, orcas, and sea lions. Video of the Gentoo Penguins on Cuverville Island

Watch the adorable Gentoo Penguins waddle around the beautiful landscape of Cuverville Island on the Antarctic Peninsula. As we attempted to get the hang of our snowshoes, I just wonder who was more clumsy as we wandered around the island in awe of these flightless aquatics birds. 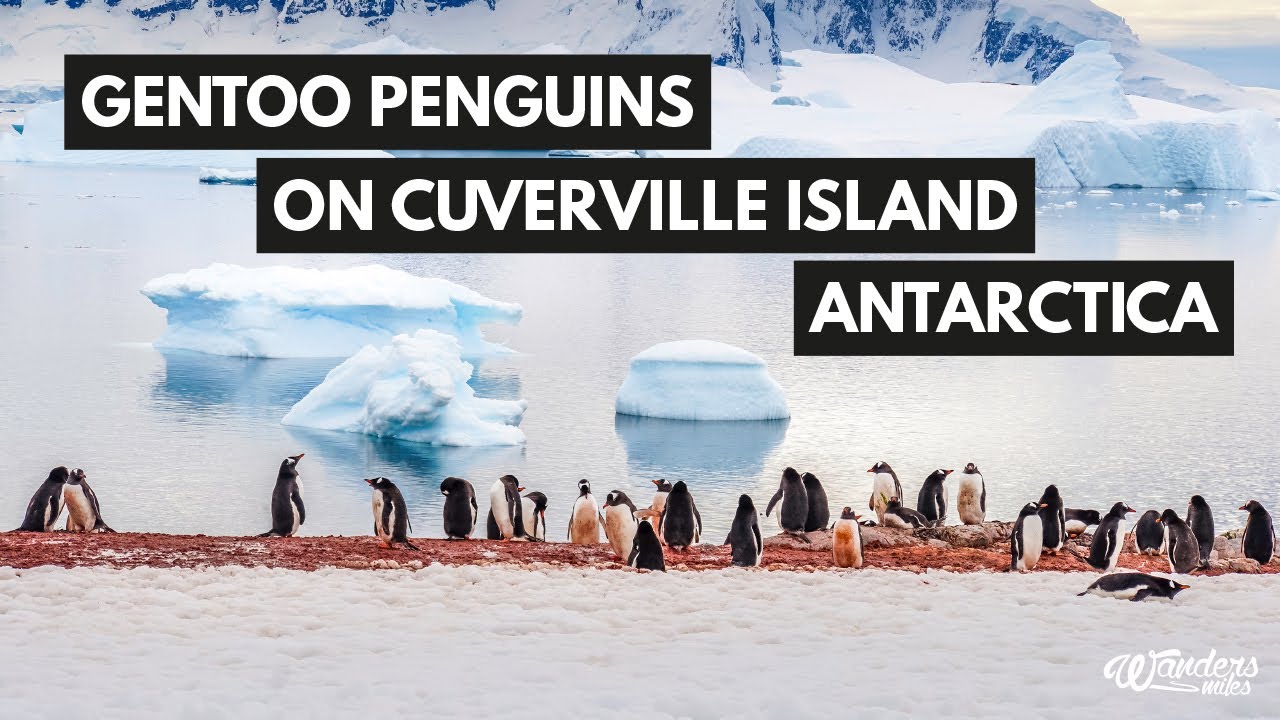 If the activities are what you want from your Antarctica trip, always check what is included in the package. Some expeditions will charge for additional activities. We opted for the Antarctica Basecamp expedition with Oceanwide Expeditions booked with World Expeditions.

With any holiday adventure, travel insurance should be a top priority! World Nomads is my go-to guys, I’ve learnt this from experience. You can buy and claim online even when you’ve left home.  I love that they give a little back too and support community development projects in various countries.

LOVE THE BLOG, PIN FOR LATER!

What an amazing destination! My partner is obsessed with penguins, so this is right up our alley – new bucket list trip for sure.

Can’t recommend Antarctica enough, it was just awesome to see the wildlife in their own habitat!

Wow! Your blog is just awesome, being an animal lover and environment enthusiast I would love to be there some day. I enjoyed the facts about the Gentoo Penguins at Cuverville Island, also learnt a lot about their breeding and nesting behavior. I would also like to add the fact that the rapid decline of the number of Gentoo Penguins in the region of South Georgia has fallen by two-thirds over 25 years.

Oh thank you for your kind words. I didn’t know this about Gentoo Penguins in South Georgia. The population is on the rise in the Antarctic Peninsula thankfully!

Antarctica as a destination has been on my radar for a while and these cute little penguins make me want to go there soon! We’ve seen penguins in Australia (though I’m not sure which kind they were) and it was an absolutely fascinating experience.

It’s just amazing to see these lovely creatures in their own habitat wherever they are… although Antarctica was pretty special!

Oh my God! What an incredible sight it must have been. I can feel the place through your pictures. Penguins are such cute animals, I would love to visit the place sometime soon. It is so sweet that the male present a pebble to the female mate as a gift, if only human lives were so simple. 🙂

Wouldn’t it be great if human courting was so simple? However, the female can turn the males penguins down, I like that they have the control! It was awesome to see them waddling around!