Our first Antarctic outing was a zodiac ride in Orne Harbour, a cove one mile wide, indenting the west coast of Graham Land along the Danco Coast on the west side of the Antarctic Peninsula. Watching wildlife in Orne Harbour in their natural habitat was a dream come true. Seeing Chinstrap and Gentoo Penguins, Weddell Seals and Humpback Whales was a wonderful start to my Antarctica experience.

Orne Harbour was first discovered by the Belgian Antarctic Expedition under Gerlache in 1898 and comprises of a rocky shoreline below scree slopes and patches of permanent snow, rising to a saddle which overlooks Errera Channel and Gerlache Strait.

From the southern side of the saddle, a steep, black rocky headland called Spigot Peak rises 285m above sea level. Whilst our group took a ride in the zodiac, another group were mountaineering the peak which is covered with deep compacted snow and ice. 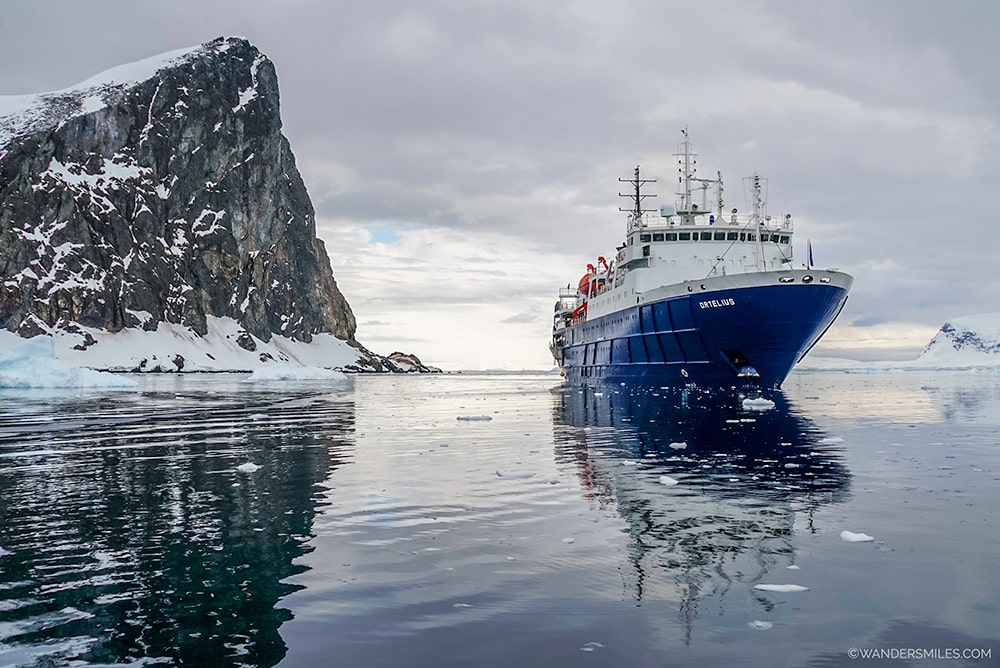 Everywhere you look in Orne Harbour you see such beautiful shapes of the glaciers, we stay far enough away in case of calving which can cause almighty crashing waves. As we look behind us, the sun creates a soft pastel glow behind the cove. 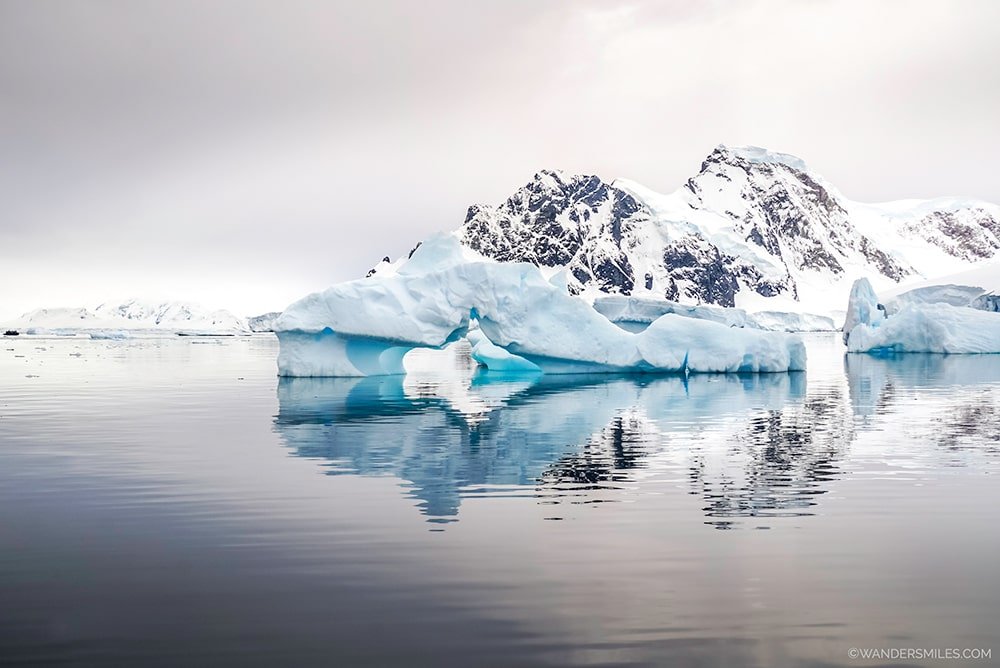 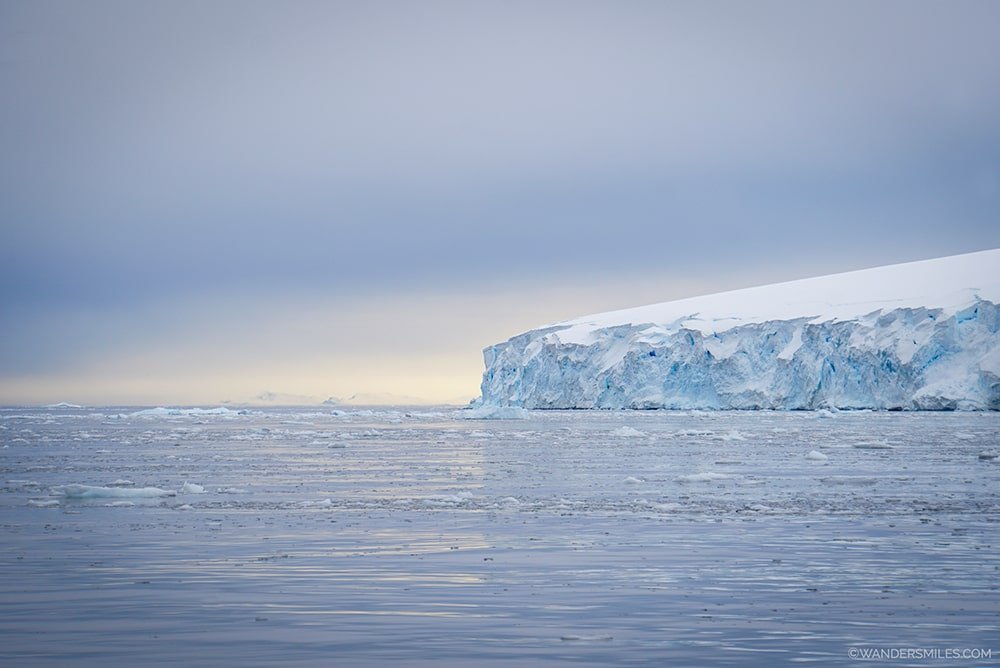 Glow behind Glaciers in Orne Harbour 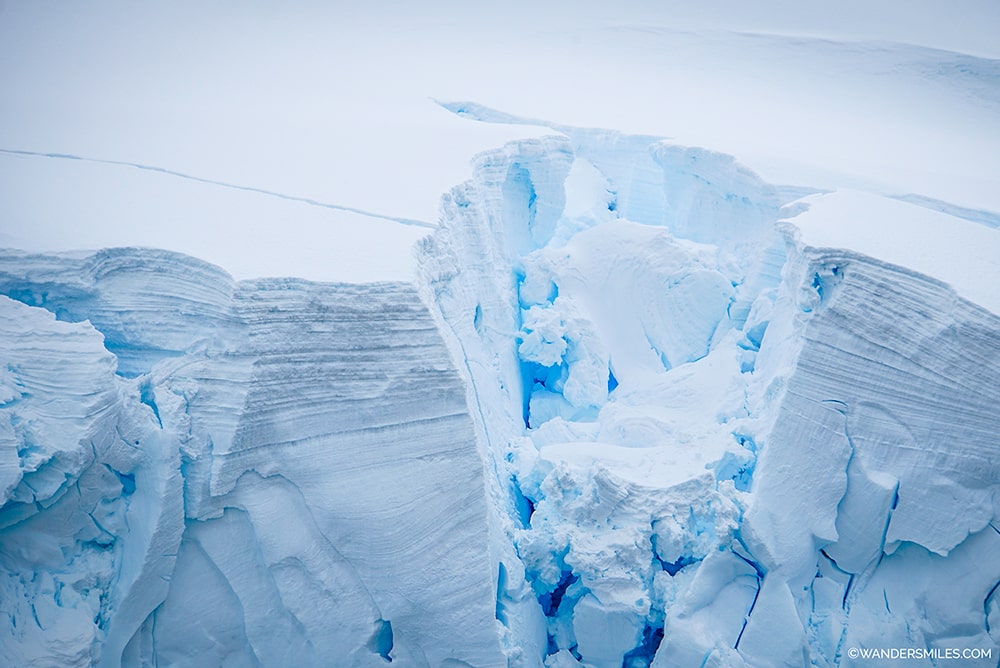 We pass a raft of Gentoo penguins swimming at great speed, dipping up and down out of the water. Did you know Gentoos have been known to make up to as many as 450 dives in one day to forage for food? They can also dive as deep as 200 meters and stay underwater for up to 7 minutes. It’s funny to watch them shoot up out the water like a bar of soap that’s slipped up through your hands.

RELATED ARTICLE: Gentoo Penguins in the Antarctic Peninsula, read about the rookeries on Cuverville Island.

The most common penguins on Orne Harbour is the Chinstrap Penguins, its name stems from the narrow black band under its head making them look like they are wearing a black hat. They are sometimes referred to as ‘Stonebreaker Penguins’ owing to their very loud squawk that could break stones. Whilst they are considered the most aggressive in the penguin world, these cuties are monogamous and return to the same mate each year for breeding. 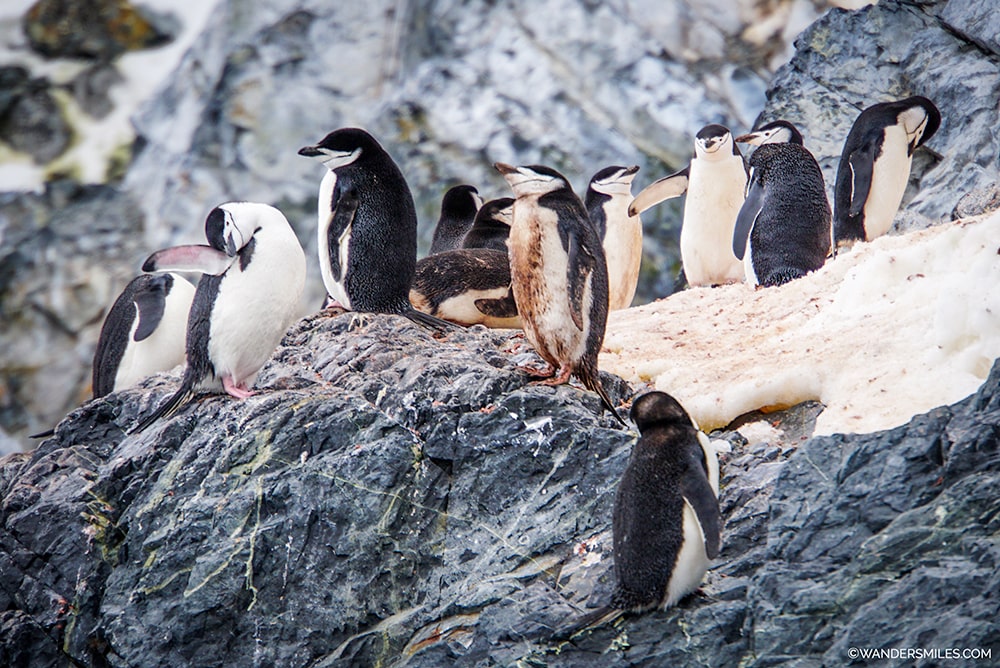 On the edge of Orne Harbour we see two Weddell Seals, one smiling in the snow with scratches from Leopard Seals across their back. The other curiously raises his head slowly scratches his back before dropping his head back down. What a life! 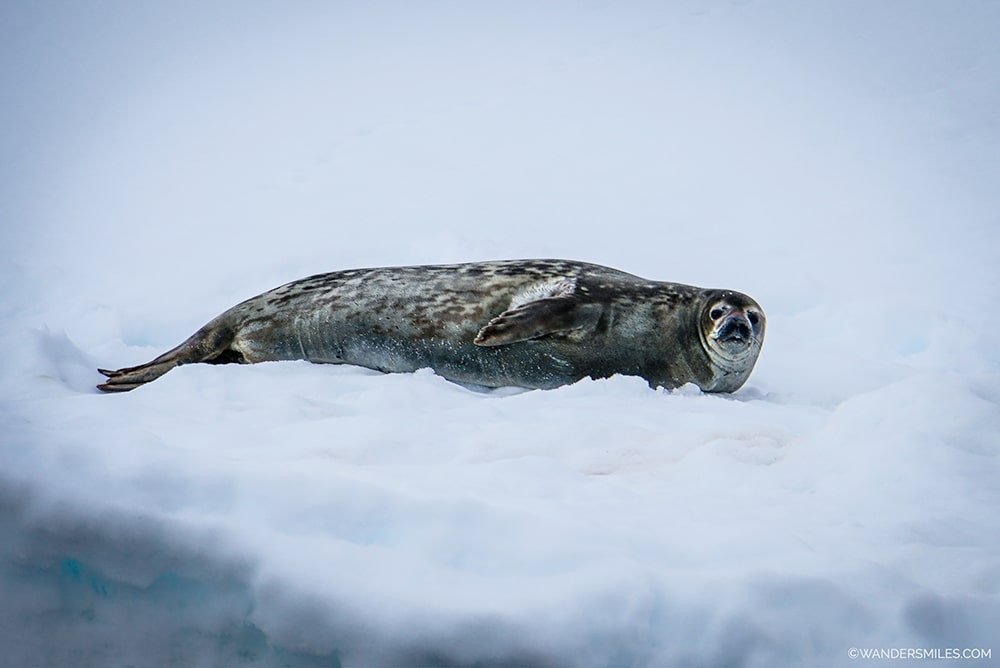 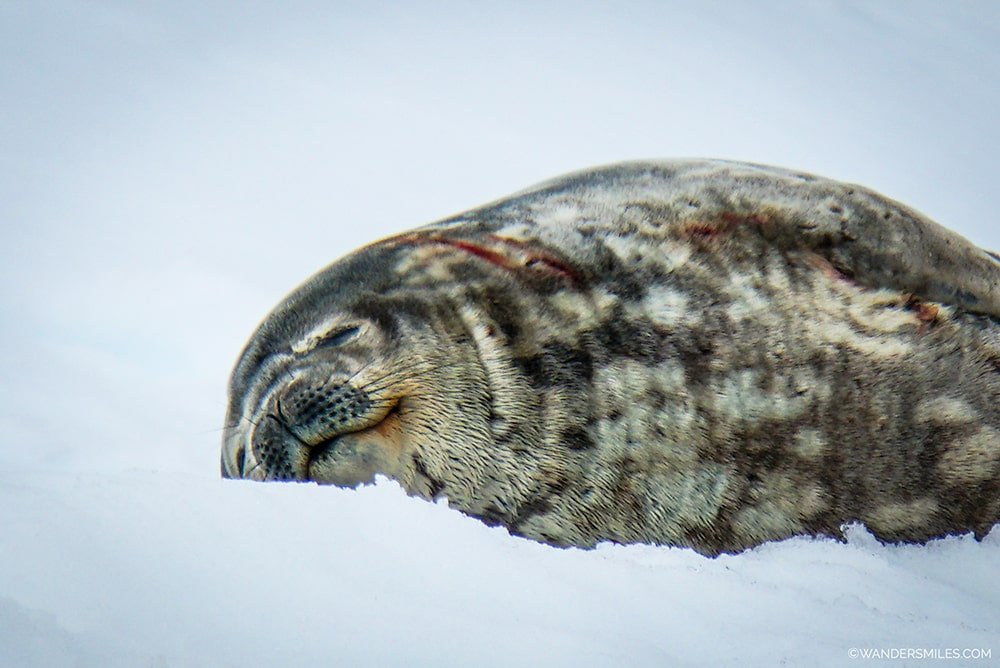 Weddell Seal in the snow

Waiting for the Humpback Whale

Excited to say we had a sighting of two Humpback Whales. Considering they are known for their acrobatic behaviour with breaching and fin slapping, these were pretty shy, the krill down there must’ve been too tasty. There was a fair amount of spouting from the Humpback’s which can typically reach as high as 6 metres and can be heard over 200 metres away. We sat for some time awaiting the big action, it was still crazy to be actually seeing Humpback Whales in their natural habitat of Antarctica. 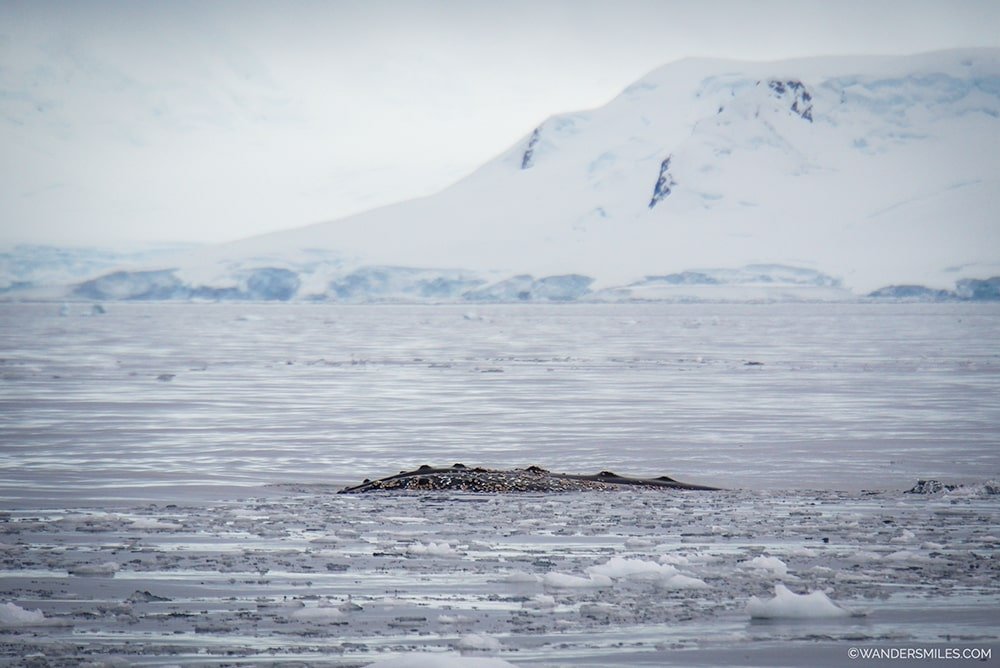 If the activities are what you want from your Antarctica trip, always check what is included in the package. Some expeditions will charge for additional activities. We opted for the Antarctica Basecamp expedition with Oceanwide Expeditions booked with World Expeditions.

With any holiday adventures, travel insurance should be a top priority! World Nomads is my go-to guys, I’ve learnt this from experience. You can buy and claim online even when you’ve left home.  I love that they give a little back too and support community development projects in various countries.

Because I absolutely HATE being cold, I’ve never really been interested in a trip to Antarctica. But man, oh, man! Look at your gorgeous photos! I may have to rethink my life choices (and bundle up like crazy) for a chance to be that close to penguins!

You won’t regret it that’s for sure. It’s worth a sacrifice for Antarctica, thermals do the job!

What an amazing experience!! Antarctica is on my bucket list for sure. It looks so beautiful!! And you got to see so many cool animals.

Antarctica was perfect in every way, my favourite adventure so far!

Love your photos. I can only imagine what those beautiful shapes of the glaciers look like in person. And I have to say that I’m a bit jalouse, you had a chance to see those Humpback Whales in their natural habitat. However shy they might have been. 🙂

The whole experience was a dream come true… especially seeing all the animals in their own habitat! World class!

I’d love to visit Antarctica. Your photos are stunning, and seeing the penguins would be a dream. Adding to the bucket list!

I do hope you get the chance to visit Antarctica, you seriously will NOT regret it!

Incredible photos! Thanks for sharing, it looks freezing but beautiful!