The face-tattooed ladies are a distinguishing feature of the tribes in the Chin region of Myanmar. This practice was outlawed in 1962 by the government supposedly on humanitarian grounds so witnessing this fading tradition is a unique experience and an honour. Let’s meet some of the face-tattooed women in the Chin State…

A brief history of the Chin State

Chin State has been isolated and discriminated against politically, socially and economically by the government and development actors. It is reported that the Chin State is the poorest area in Myanmar.

Animism was the original religion of the Chin Tribes. Missions of Christian evangelists started Christian religion in Chin State after 1886 when Britain colonized Myanmar and now Christianity is the predominant religion across the State.

Legend of the face-tattooed women in Chin State

There are three trains of thought as to why the Chin women are inked, however, our guide explained that this has only been passed down by word of mouth and has not been written down.

One reason given for this custom is that Burmese Kings would travel to the Chin State and select beautiful girls for their harem so making them undesirable as a way to protect their daughters.

Another narrative is that neighbouring tribes would kidnap girls so giving them distinct tribal markings was a great prevention tactic.

Some say that pastors told the Chin people that only the tattooed women would go to heaven. As strong believers in Christianity, this would be a plausible reason.

Either way, the tribes got creative to make their females look ugly but now the women are proud of their designs. As it is no longer permitted, you will mainly see this in the older generation although some remote hill tribes still perform on their younger females.

Each tribe has varying designs across their faces, neck, and some on their arms. In rare cases, they will cover their faces totally, devoid of any patterns at all.

In Dai village they have created a bamboo building to house tribal artefacts such as jewellery made from agate, hollow mython horns used a drinking vessels and shields made from elephant skin.

We met 3 ladies in the village, Daw Phuithant (aged 74), Daw Pan Thang (aged 60) and Daw Lee Hlie (aged 55) who told us how they would tattoo each other from a young age. The painful process happens over many hours by using natural inks from the sap of leaves and the inked in the face with bamboo. I’m sure the more delicate areas under the eyes wouldn’t be the most pleasant experience!

The face tattooed women gave us a performance with the nose flute which is generally done if they are either grieving for their husband or thinking of him if he is off hunting. The other instrument is thought to sound like the wings of the Great Hornbill. 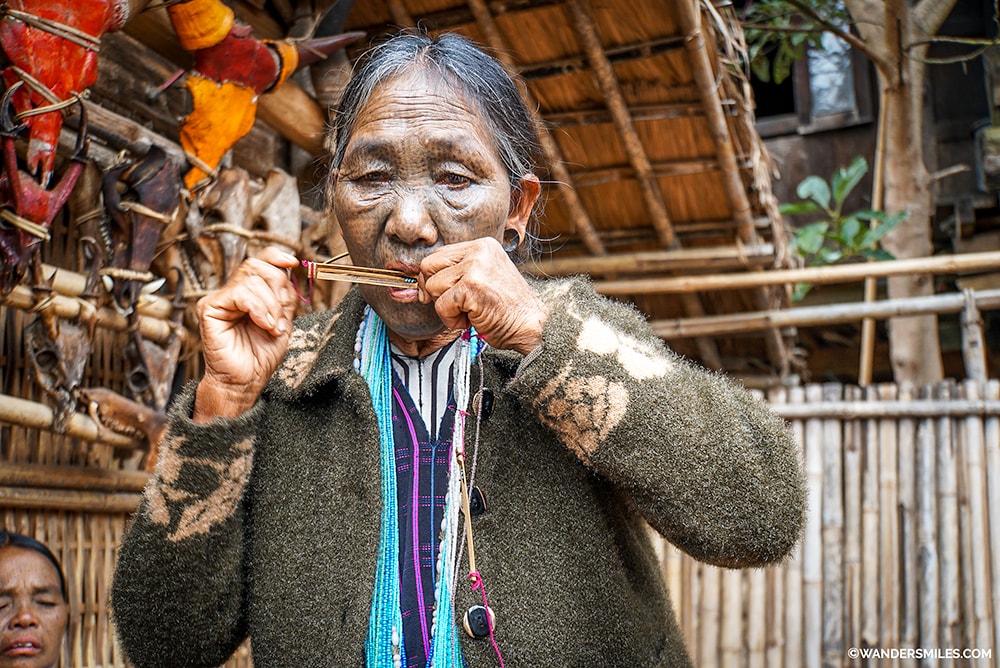 RELATED ARTICLES: 2 DAYS IN YANGON AND SUNRISE AT THE SWEDAGON PAGODA

In Kantharyone Village, we met 70 year old face-tattooed lady, Daw Hmumana. We were welcomed into their hut where many people from the family and the village were sat cross-legged glued to the television. They got electricity 5 months ago so this was still a big novelty.

Hmumana has 4 sons, 2 daughters and sadly lost her husband last year. She met her husband at 18 or maybe 19 after she tattooed her face. One of her sons is the Preacher at the village Christian church and seemed thrilled when I said I was of the same faith, at which point I thought it best to omit I was non-practicing.

She was curious to find out more about us and having a TV has given Hmumana some reference about the outside world knowing about some of the nationalities in our group. She asked if we have paddy fields in our country and wondered how we get our rice. 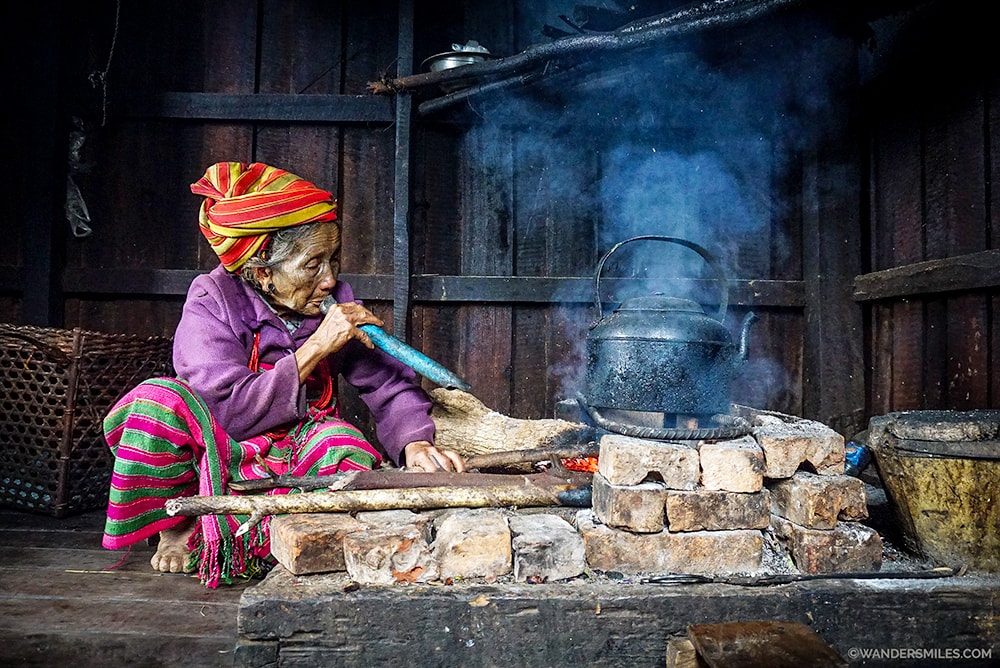 Well what can I say about 94 year Daw Nay Kui? If you wish to meet any of the face-tattooed women in Chin State, you need to cross paths with this one from the Yindu tribe. To say she was an absolute legend was an understatement! She had bags of character and just had us in stitches as she gave us kisses and tucked up laughing.

She has 3 sons and 2 daughters who all work away but she is happy with that as she wants to do everything herself including the cooking and chopping wood. 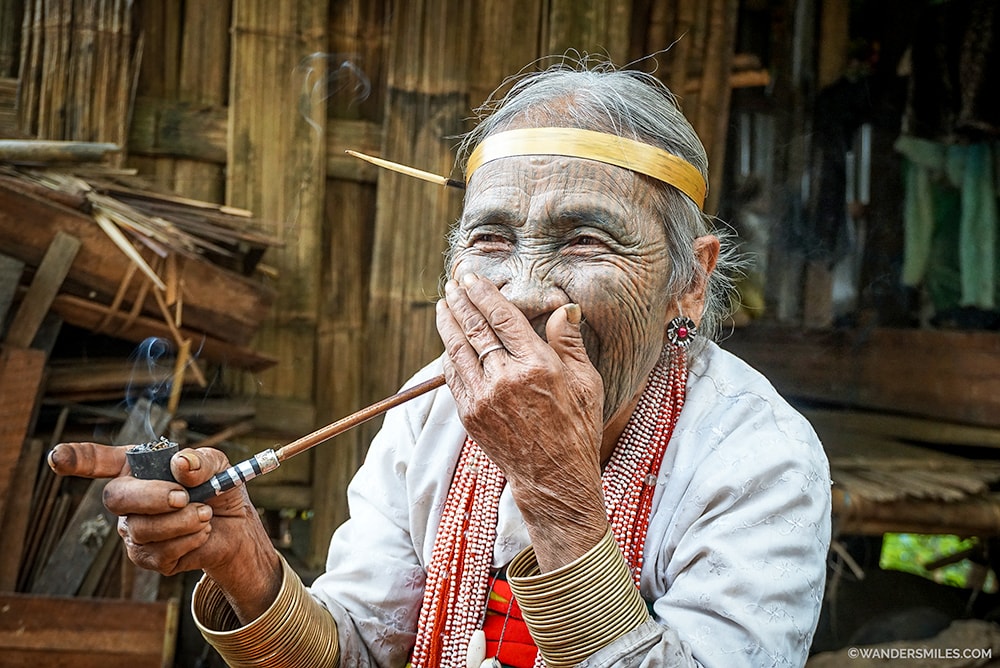 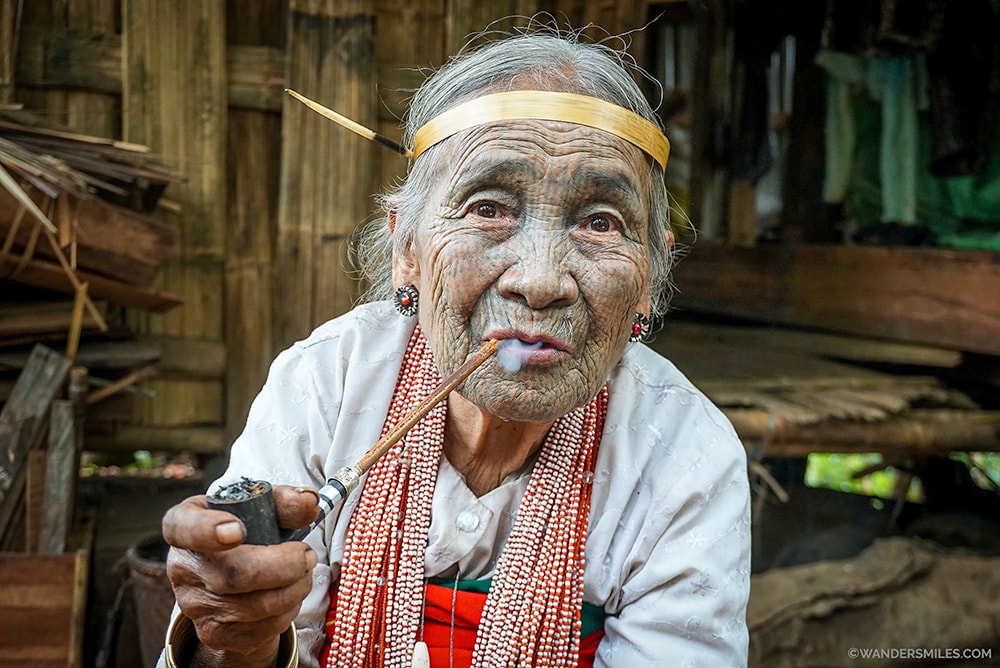 Mother Earth Mountain, also known as Mount Victoria, a term left over from the colonial days, is now better known in Myanmar as Nat Ma Taung or in Chin language as ‘KhawNauSone’. Mt KhawNauSone is a protected area in KhawNauSone National Park which was established in 1994. Covering 279 square miles, the park offers you virgin forest, wild orchids and colourful butterflies.

As we drove through the KhawNauSone National Park, we passed many bamboo houses with face-tattooed ladies from the Muun Tribe who came out of their homes to greet us. They design of semi-circles of their cheeks represent the moon, lines on the nose and chin represent sun rays and the dots are the the stars. 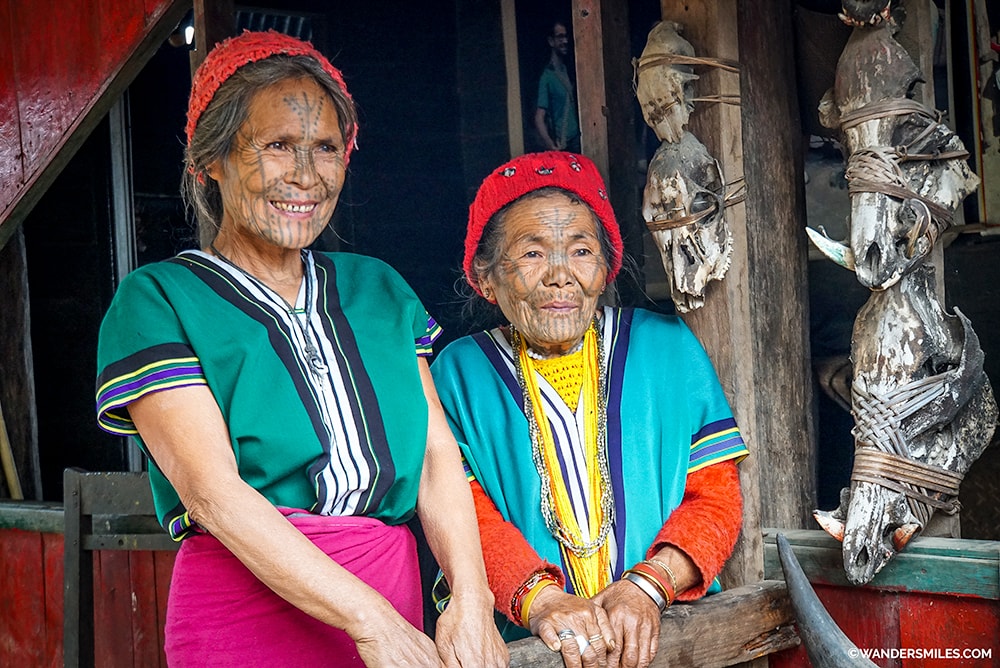 Ladies from the Muun Tribe on Mt Victoria 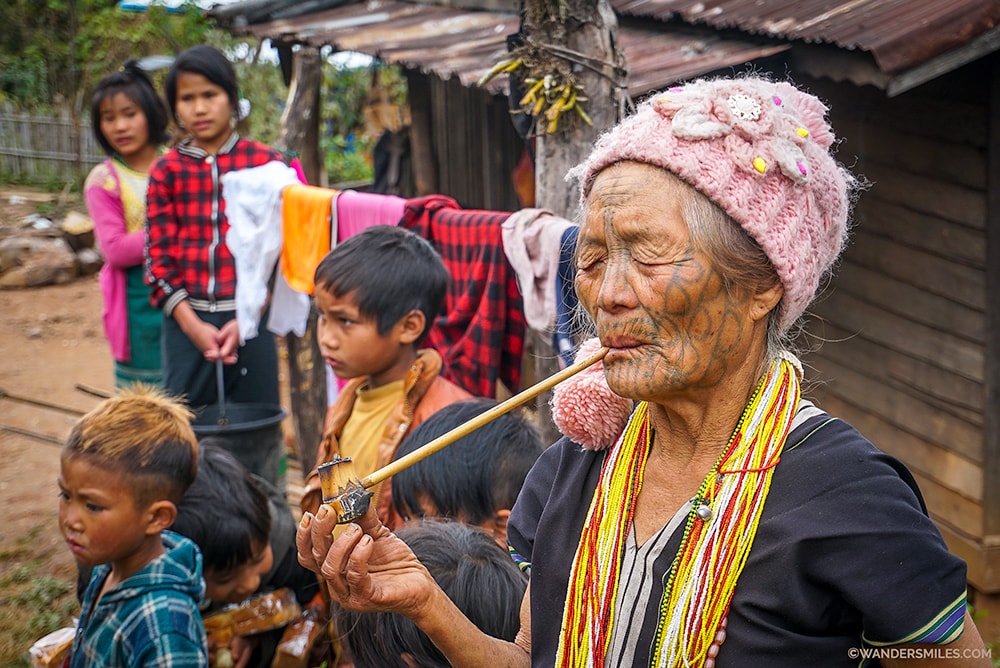 Face tattooed woman from Muun Tribe with her Family

We were heading for a less accessible village to see Chin life in all its glory. We trekked one hour to meet both men and women from the Muun tribe dressed in their colourful traditional outfits. They offered us rice wine from the hollowed horn of the mython. Whilst the practice of face-tattooed women is disappearing in the Chin ‘Wild Hill’ tribes, we did come across one inked lady who was only 28 years old. I’m guessing it is much harder to police in such hard-to-reach areas. 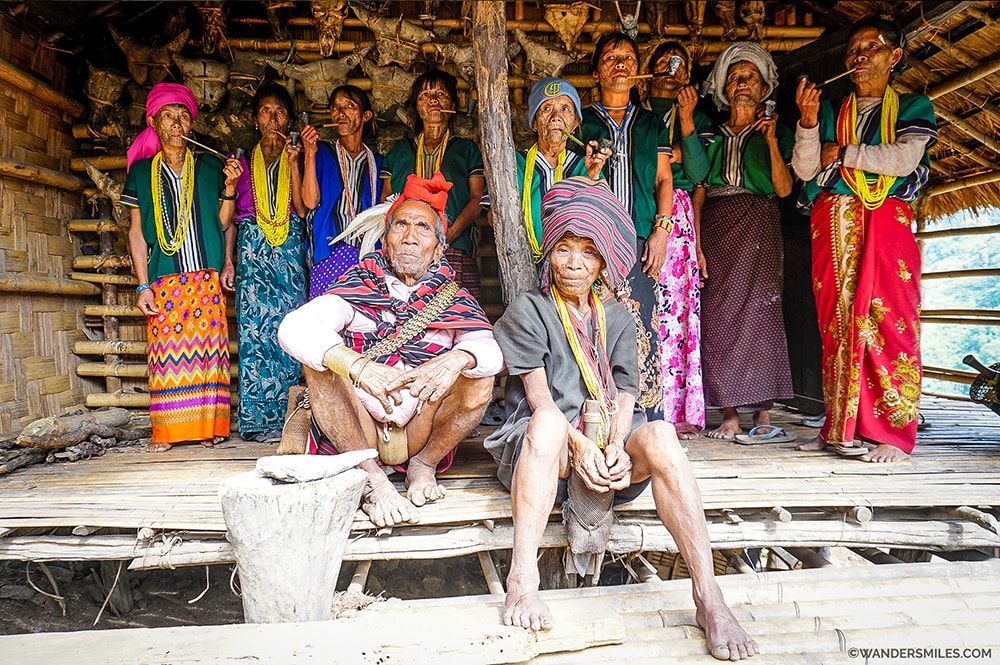 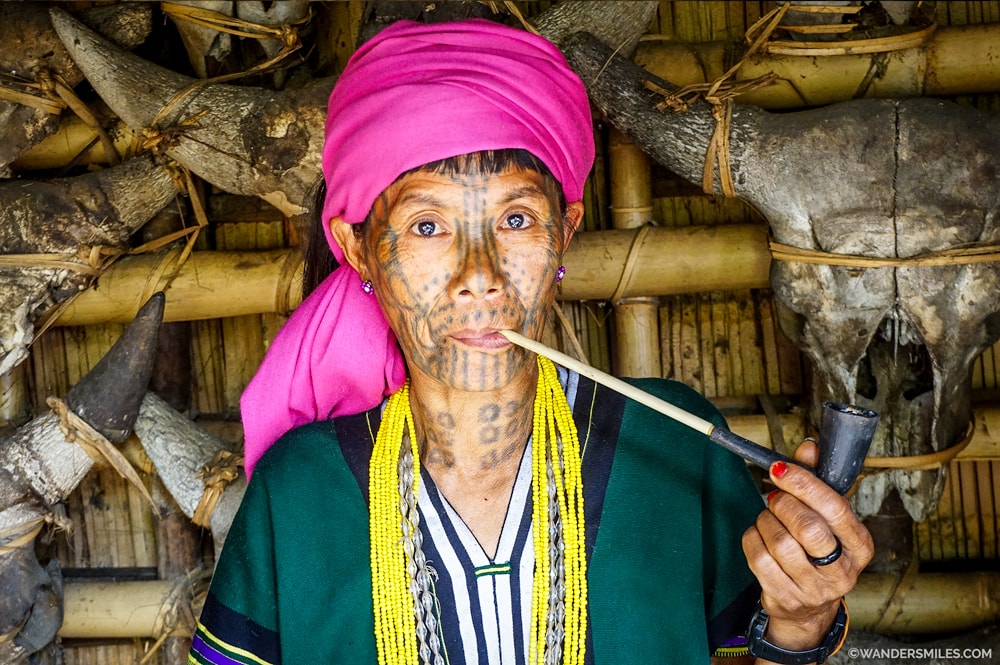 Daw Yaw Shen from the M’Kaan Tribe a well-known legend in Mindat. She is now 96 years old and was 15 when she received her face-tattoos, it is very common for this to happen before marriage. Yaw Shen proudly show us her gauged earrings which had been beautifully decorated with bright beads and were surprisingly light. She played us a tune on her nose flute and had nothing but big smiles and a twinkle in her eye! 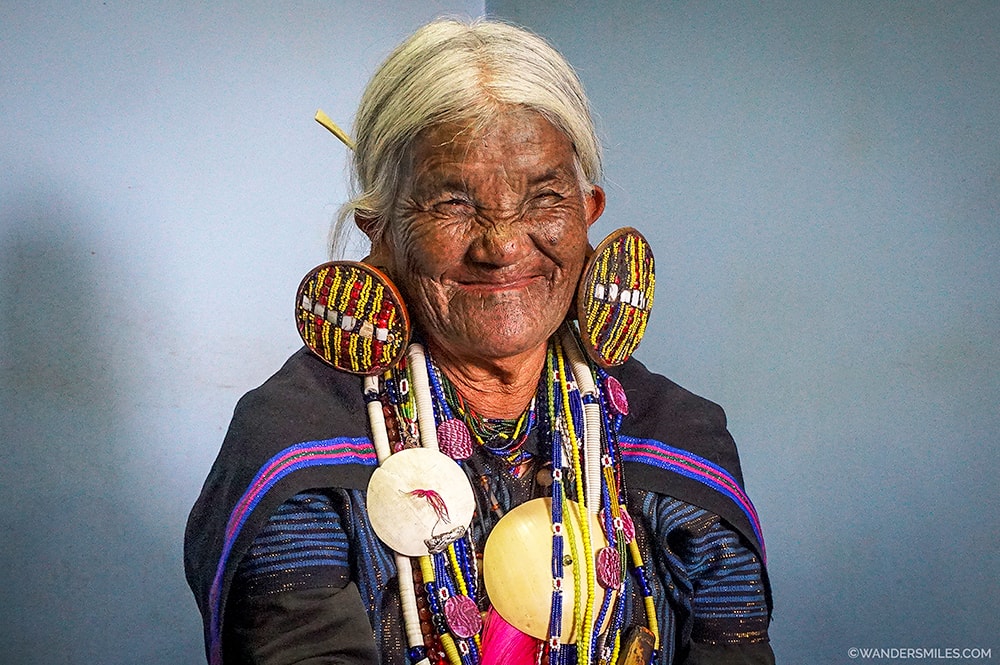 WHAT TO KNOW ABOUT VISITING CHIN STATE

To visit the tribes in the Chin State a local guide was required as most do not speak Myanmar language, only that of their region or tribe. They would let the tribe know that you will be visiting rather than turning up unannounced. I was on a group trip with Trekkup Dubai where the local guides were sourced for us!

Travel Insurance is a must!

IF YOU LOVED THE BLOG, PIN FOR LATER!

What a fascinating experience to meet the various tribes in the Chin State. I appreciate how you had the opportunity to meet and talk with the women and also see how their lifestyle is. Love how they proudly display their culture through their music and traditional outfits. It’s unfortunate to hear that the practice of the face tattoo is slowly fading away with the new generation. Hopefully there are other traditions that they’re preserving.

The ladies we met were extremely proud of their culture and traditions, I hope the new generation will continue some of them for years to come. The outfits were fabulous, so colourful.

First of all, I love all the smiles you captured in the Face tattooed women of the chin tribes in Myanmar. The more I read about the former Burma Country, the more I really want to explore and discover more of the culture of this country! I love all the history and unique art on all the faces of the women. I think personally 94 year Daw Nay Kui is my favorite. Crazy how they all smoke yet live to 90+ years old!

Daw Nay Kui had me in stitches, she is one of life’s characters. Burma is a wonderful country and can’t wait to go back and see more!

This articles was so interesting to read. I am so glad that the Chin tribe is abandoning the practice of face tatooing. That is so cruel. They do appear to have a long life span though and seem to be very happy. Listening to the nose flute must have been a treat. I can just envision what he sounded like.

I’m glad you enjoyed the read. Although the tattoos were painful, the women were proud of their inked faces and makes me wonder if they would like to see the tradition continue. The nose flute was an interesting tune for sure!

Wow, what an interesting cultural experience. I love that you were able to visit the tribes with a guide in an ethical way. The history of the tattooed Chin women is so interesting!

It was interesting to meet the tribes and find out more about their everyday lives. They spoke about their traditions in a proud way, was lovely to see.

So glad I came across this post as I hadn’t known about the Chin region, the tribes there, and the face-tattooed women. Just as I read the title of this post, the first thought that had crossed my mind was why did the women get inked in the first place – appreciate how you describe the possible narratives behind this practice. It is surely good to read that this painful practice is no longer permitted though. The most meaningful travel experiences always seem to be when we are able to connect with the locals and learn more about their culture – so I can understand when you say that to meet the ladies of the tribe was an honor. Truly a unique experience!

It really was an honour to meet these ladies and hear their story about their culture and why they inked their faces. They have so many experiences that are unique to us in the Western world, I was fascinated.

wow the first two reasons they may have gotten tattooed are kind of sad, but it’s all very interesting. It must be painful to get face tattoos! Or maybe they just acclimate to the pain over time. 🤔