The holy city of Pushkar is a unique experience; quaint, spiritual and utterly mesmerising. It’s famous for Savitri Temple, Pushkar lake with the surrounding ghats and temples, the colourful bazaars and backstreets and the Camel Fair (we missed this one)… and not forgetting the Dargah Sharif of Ajmer.

All differences in this world are of degree, and not of kind, because oneness is the secret of everything.

Now for the next leg of the trip, off to Pushkar in the Ajmer district of Rajasthan; it takes about 3 hours to drive the 145km from Jaipur. We stopped off at the Savitri temple located on top of the Ratnagiri hill, a popular pilgrimage site for Hindus. We were pretty red-faced after climbing the 3,000 steps to reach the temple but we had the local kids to keep us company, they were obviously after money not our out-of-breath chat. The temple, built in 1867, is dedicated to Savitra, the wife of Lord Brahma and her statue is housed here. The panoramic view was immense, however, the sun was setting so we left the monkeys playing and headed down in the cable car (you can get this up there if you don’t fancy the ascent on foot).

Pushkar Hotel Kanhaia was our luxury bed for the night after our meal by the lake. Pushkar is a holy city, alcohol and meat are strictly forbidden within the city limits, however, you can freely find bhang lassi on the menus of the small cafes, a yoghurt-based drink with spices and hashish. Johnny Vagabond says it tastes “like dirt and lawn clippings” and his account of the after-event had me in stitches.

There is nothing like experiencing the noises, the culture and the people at night but if I can make one recommendation, flips flops are not the best choice of footwear with big piles of holy cow dung in the streets… yep, you can imagine what happened next!

No alarm is required in Pushkar, the noisy buzz of the busy streets works just fine as a wake-up call. After breakfast it was time to get in the thick of it, the colours were shouting out, the street-sellers want you to buy, the cows striding towards you, snake-charmers looking for likely people to charm, and the temples are a place of calm (if that is possible). The preparations for Diwali are well under way as baskets of garlands for the Gods and deeyas (earthenware pots) to display light are being sold on every corner.

The holy lake in Pushkar is believed to be formed by the tears of Lord Shiva after his wife, Sati, died. The 52 ghats and over 1,000 temples in Pushkar make this one of the most sacred Hindu towns in India. Pilgrims come from all over to take sacred bath to wash away their sins.

On the way back to Jaipur, we got out the bus in Ajmer and were transferred into rickshaws up the narrow streets, best to keep your limbs inside if you want to keep them attached. We landed on the main strip that led to the Dargah of Moinuddin Chishti, the Sufi saint who worked for the welfare of the poor and blessed them.

Outside the shrine there was piles and piles of shoes to enter the ‘complex’ where the marble tomb lays beneath, the amount of people was just staggering. Offerings are made with flowers, sweets and a ‘chadar’, there were separate groups of people praying, some wailing very loud. With hundreds of others, we were herded through the temple like cattle to be blessed, an orange thread was quickly ties around our wrist, the whole experience was intense yet calming.

>> Read about riding round Jaipur on motorbikes and the Diwali celebrations.

Get 5% off travel insurance

Always make travel insurance a priority! I’ve partnered with World Nomads to offer you 5% discount for first time customers. I can’t recommend them enough, the contract is easy to under and most of all they are responsive when you need to contact them from abroad to resolve an issue. Click to claim your World Nomads 5% travel insurance discount. 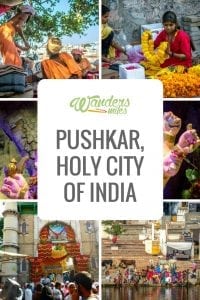 One day in Jaipur to celebrate Diwali // India

Sounds like an intense and exciting trip, I look forward to hearing more about it. Great photos too

Thank you! Yes I always find India intense for some reason, Pushkar is such a lovely place, so much to see!

We have been to pushkar twice! Like this small city for it’s religious aspect and the only Temple Of Lord Brahma in India!

I loved it, I don’t say this often as I like to discover new places but I’d definitely go back 🙂

What a great experience! Reading your every word, I felt like I was there. The views must have been amazing from Savitri Temple.

I loved my short stay there, a real experience not to be missed! The views from the Savitiri Temple were outstanding.

Sounds like quite the adventure! I’d love to hear Johnny’s description of the yogurt drink. I’ve heard those are… rough.

Hey Alicia, it really was a cultural adventure. Click on the link in my article to read about Johnny’s experience, very funny!

Pushkar has been on my bucket list for quite some time. I love lassi as well! I am going to bookmark this for future reference.

Thanks for bookmarking. You should definitely make time to experience Pushkar, well worth a visit!

I had never heard this place before but it seems like an interesting place to visit and to explore.

To be honest, I’d never heard of it before my trip to Jaipur but I’m so glad I got to experience it. Lots of see for sure!

Lovely photos! The city looks vibrant with amazing bright colors and the people in it with their culture. The architecture looks great too. I dont think i can make the 3000 steps though but i should. 😊

Hey Jen…It really is vibrant but very chilled. Everywhere you turn there is something interesting happening. The steps were a challenge but worth it!

Vanessa thanks for the elaborate description of the savitri mandir. I am a bit embarrassed but I have to confess that I didn’t know the story behind it.
Thanks for letting me in on that piece of info.

WOW really enjoyed reading this lots of fantastic information, I will visit here when I go to India.. You photos are beautiful. I love places like this. india has so much to see and do, bookmarked..

Awesome post! Thanks for sharing your experience, very helpful!

Great article, that looks like such a beautiful place 🙂

There is a camel fare also organized in the month of February at Pushkar, you must experience this fare also

I am grateful to learn so many great places to see and visit when in India.

Looks like a place full of colour! would love to visit one day 🙂

Very educating! Such a great place. Thanks for sharing