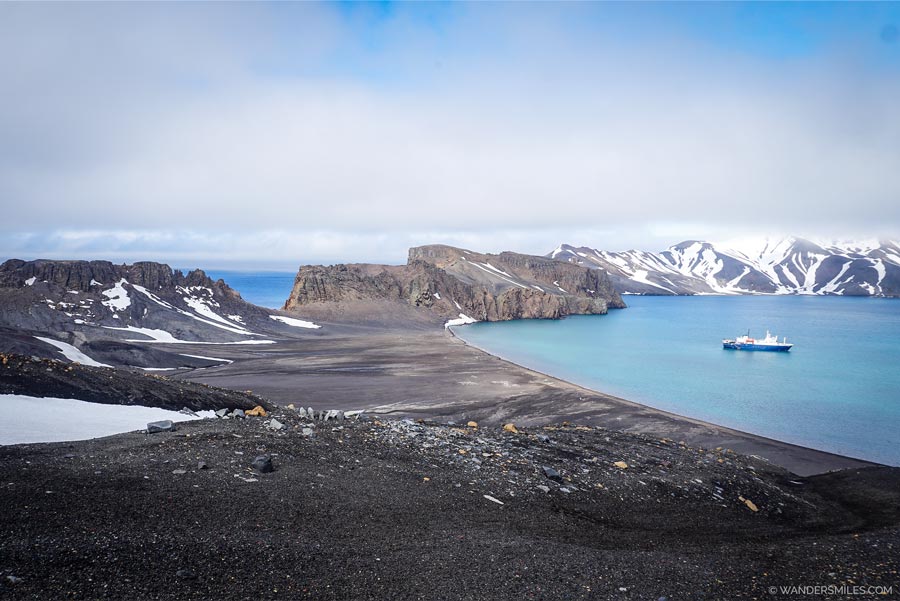 Deception Island is an active submerged caldera volcano in the South Shetland Islands archipelago of Antarctica. Known as the island of fire and ice, the side of the shield volcano has been eroded, flooding the caldera-forming a horseshoe shape that allows ships to sail through the gap called Neptune’s Bellows into Port Foster.

Exploring Deception Island was our last day on our Antarctic expedition so we had to make it count by hiking up the caldera, learning a little maritime history, watching the Antarctic wildlife, and doing the polar plunge!

Before we dive into the exciting adventures on Deception Island, I think it’s important to learn a little background. Unlike many parts of Antarctica, Deception Island has an interesting timeline of human history habitation and natural disasters.

1820 (YEAR OF DISCOVERY) – In January, Edward Bransfield and William Smith, British sealers made the first sighting of Deception Island. In November 1820, Nathaniel Palmer,  United States sealer, sailed closer and discovered the gap to sail into Port Foster and he named it Deception Island. Also in 1820, Pendulum Cove became the base of the US sealing fleet led by Captain Pendleton.

The discovery of Deception Island by British and American sealers in the early 19th century was not good news. They slaughtered over half a million fur seals and pretty much wiped out the population in the South Shetlands.

1908-1931 (PERMANENT WHALING STATIONS) – By this time, there were 3 whaling companies using Deception Island, 2 Norwegian and 1 Chilean, which required over 200 men.

The early ships could only process the blubber into oil and the carcasses were cast into the bay. Whale oil was a valuable commodity for lubrication, lighting, and other purposes in the early twentieth century.

In 1912, new regulation prohibited this and The Norwegian Hektor Whaling Company established a land station to deal specifically with the carcasses and process all parts of the whale carcasses effectively. A post office was erected and a cemetery for the men passed was established with 35 graves.

1928 (HISTORY WAS MADE) – An expedition led by an Australian Sir Hubert Wilkins with 2 aircraft made an 800 metre runway on Deception Island with the help of the whalers. He made history by becoming the first person to fly a plane in Antarctica.

1943-1969 (BRITISH SCIENTIFIC BASE) – British Naval expedition called Operation Tabarin conducted scientific research and reinforce territorial claims in 1943. The volcano eruption ended activity for the base in 1967 and whilst it was reoccupied for a short time from 1968, it was considered unsafe after further volcanic movement.

PRESENT DAY – Deception Island is now managed as part of the Antarctic Treaty making it a protected area.

As many areas are have restricted human access for environmental reasons, we had two stops on Deception Island – Whaler’s Bay and Telefon Bay. 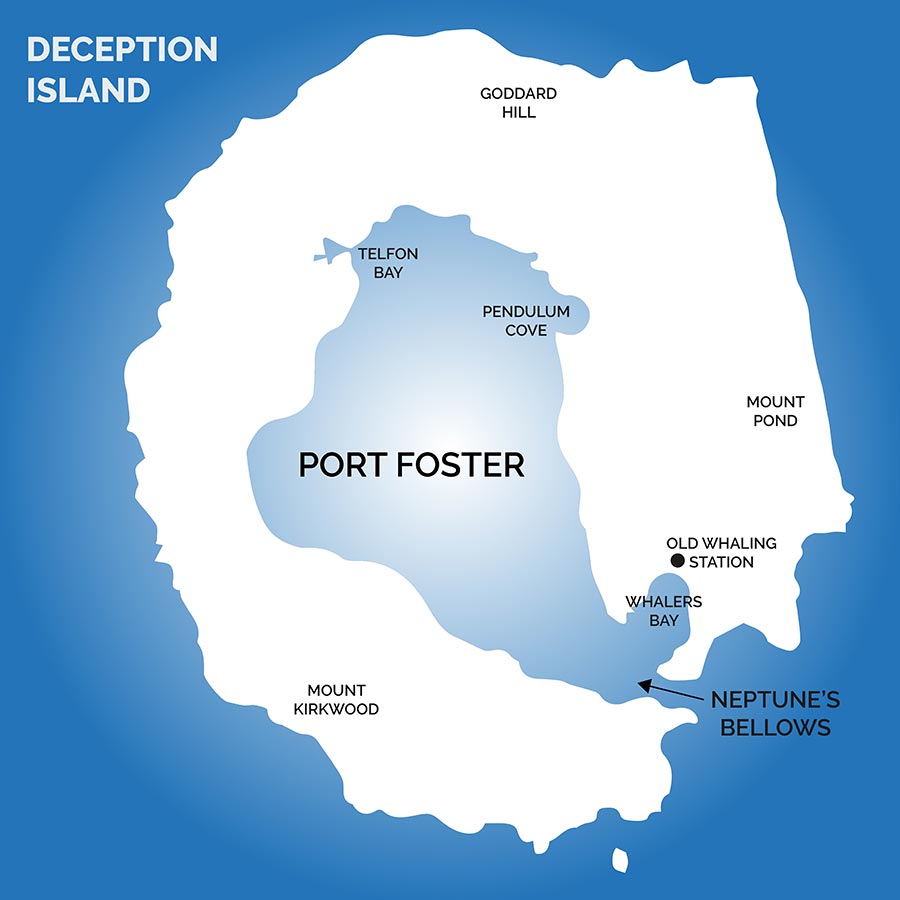 On shore, we visited the remnants of Hektor Whaling Station which was operational, and a British Antarctic Survey Base, Base B, which opened in 1944 and closed in 1969, after the buildings were destroyed by a lahar (mud avalanche).

There were also some water boats decaying along with the shoreline testament to the once-bustling island, a big part of maritime history in Antarctica.

Being a volcanic island, many species of fauna and moss are growing in the area so we could only get so close to some of the remnants. It is reported that 18 species are unique to Deception island and there are ecological study sites where people are forbidden to go. 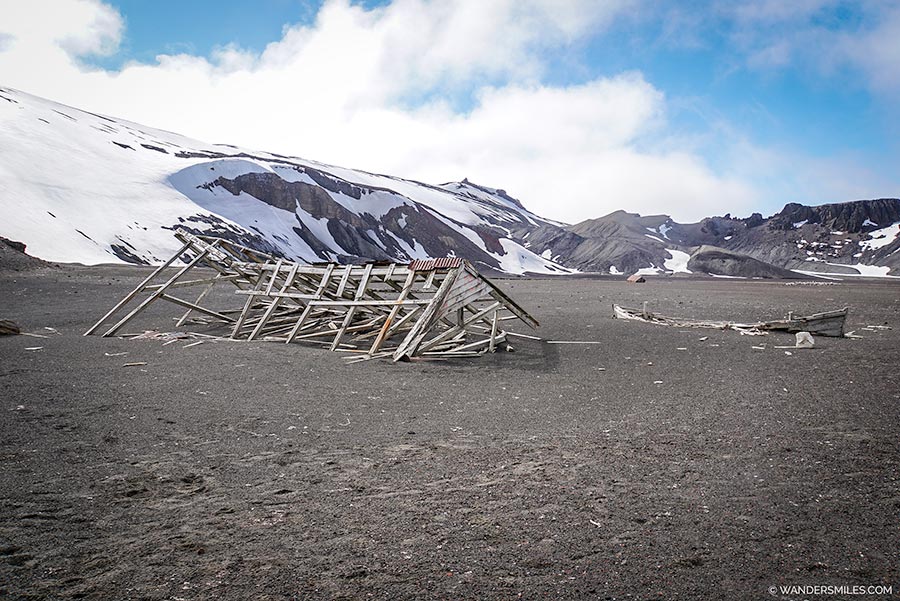 Hiking the caldera on Deception Island

The volcano last erupted between 1967 and 1970, and is still, technically, active. Here’s hoping our day was not going to be a repeat performance.

The hike up the 130-metre summit did not take too long but the cool winds were powerful as they whipped around your face. We were halted at the top at the edge of the gorge so we did a swift turn to face the tremendous views over Port Foster.

We took another walk on the opposite side of the bay to the ‘Deception window’ where you can effectively see the outside of the horseshoe shape and a flurry of activity from swooping petrels and albatrosses. 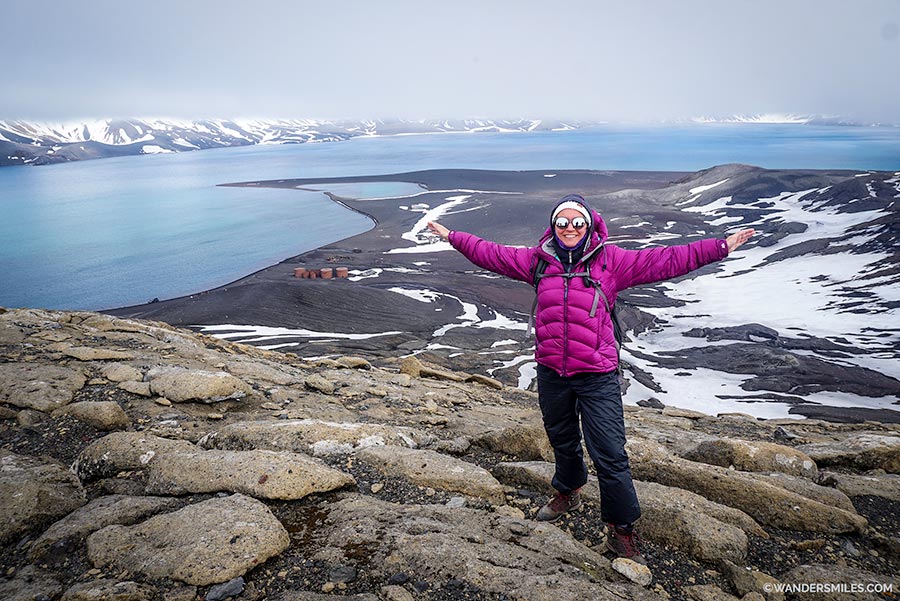 Hiking the caldera on Deception Island 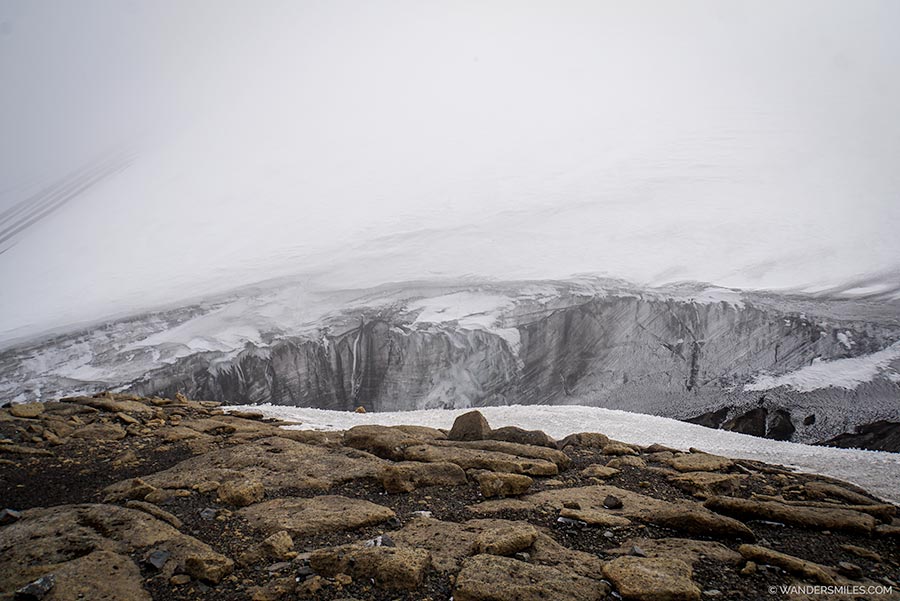 Top of the caldera on Deception Island

As we disembarked the zodiac on Telefon Bay, there was a welcome committee of Chinstrap Penguins checking out the new humans visiting their island. They are Instantly recognisable by the black band that gives them their name and they look rather official as if they are wearing a black hat.

Chinstrap Penguins feed mainly on krill and fish and are considered near-shore feeders, feeding close to their breeding colonies. Seemingly, Chinstrap Penguins have a feeding body clock as their diving efforts are usually concentrated near midnight and noon and typically only last less than a minute.

Deception Island is home to one of the largest colonies of Chinstrap Penguins but is strictly off-limits to tourists coming ashore. 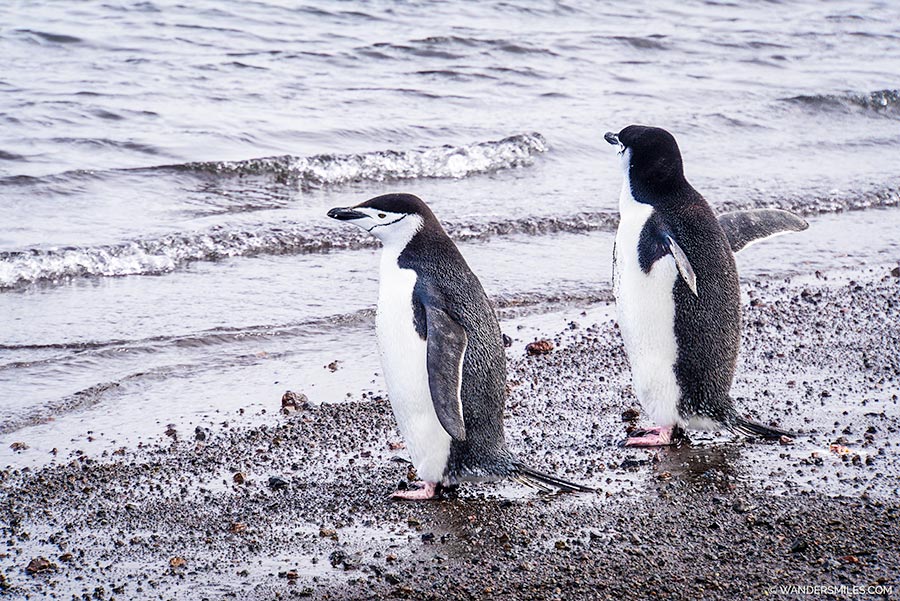 Storm Petrels were having a feeding frenzy on the krill. The legs of Storm Petrels are disproportionately longer than other Petrels making it difficult to support the bird’s weight for more than a few steps. They seemed to be fed by either bobbing around on the water or fluttering just above the surface. 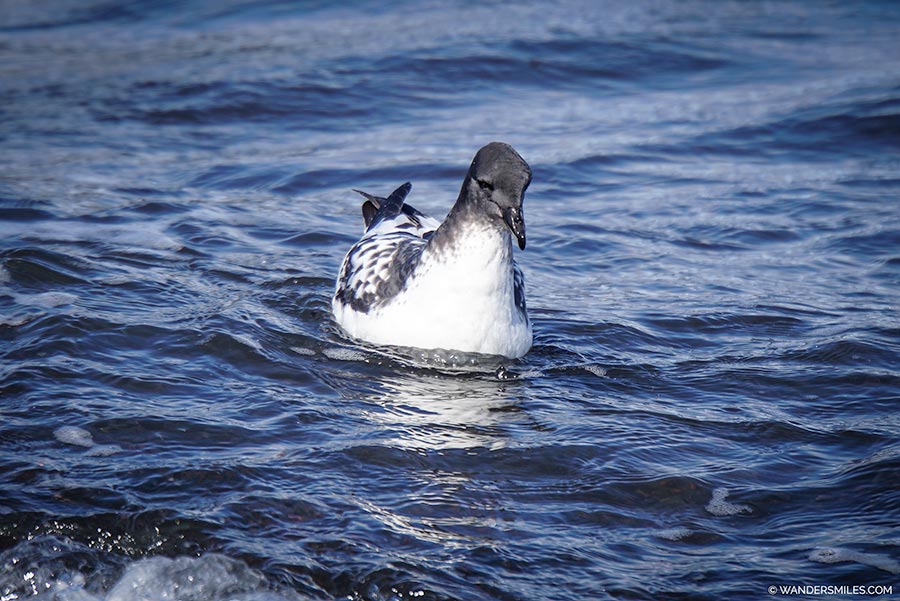 Skuas are considered the villains in the world of Antarctic birdlife. They prey on the eggs of penguins and other birds so the breeding season is a happy day for the Skuas. They often work in pairs with one pulling at the penguin’s tail away from their nest whilst the other raids the goodies.

Skuas are known as piratical feeders as they will attack a petrel or albatross and intimidate it into giving up its catch. My guess is that this Skua had his beady eye on the Storm Petrels ready to pounce. 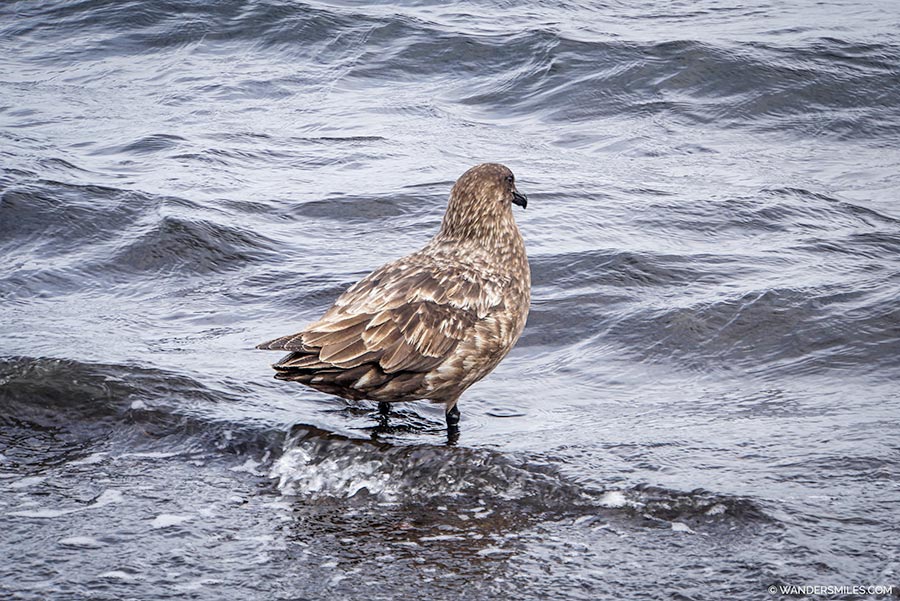 Waiting for Weddell Seals to move

Down one end of Telephon Bay, a herd of Weddell Seals was chilling as they do. They’re fascinating to watch but you do need to be patient to see any flipper belly-scratching action or a brief rising of the head before they slump back down.

Weddell Seals are placid by nature but not so social, you can see them spaced out at comfortable distances from each other on the ice. Looks like personal space is a thing for the Weddell’s!

Weddell seals spend much of their time below the surface in the chilly Antarctic waters where food is plenty. In the winter they will huddle around breathing holes made in the ice with just their noses poking to avoid the harsh winds.

FUN FACT: Did you know the Weddell Seal bore its name from James Weddell, a British explorer and seal hunter who set a record for navigation into the Antarctic? 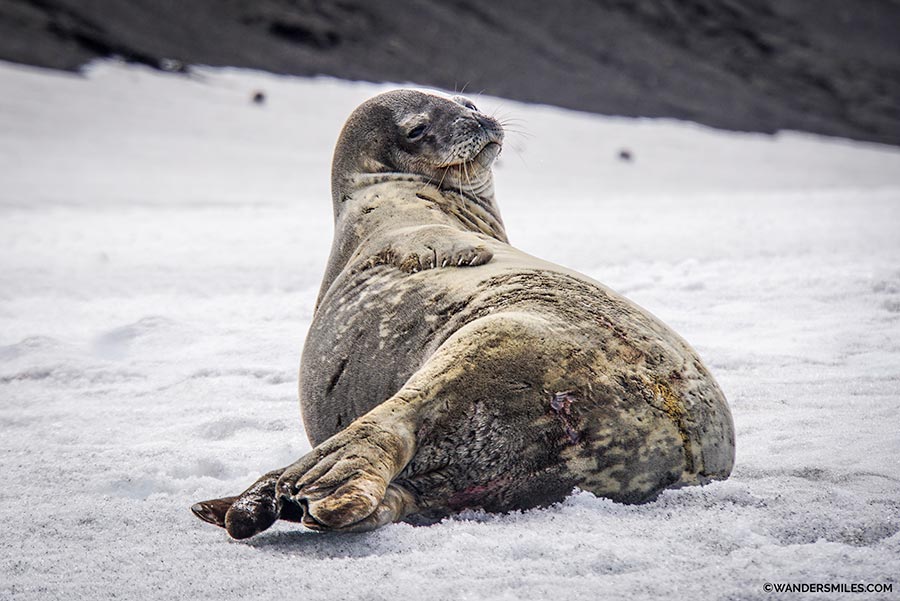 Gentoo Penguins keeping busy as ever

Every island we stepped on in Antarctica, our lovely feathered Gentoo friends made an appearance and seemed to be forever busy with daily tasks such as foraging for food or finding rocks for their partner’s nests. They shuffled past the Weddell Seals as they lay flat out… and not so busy! 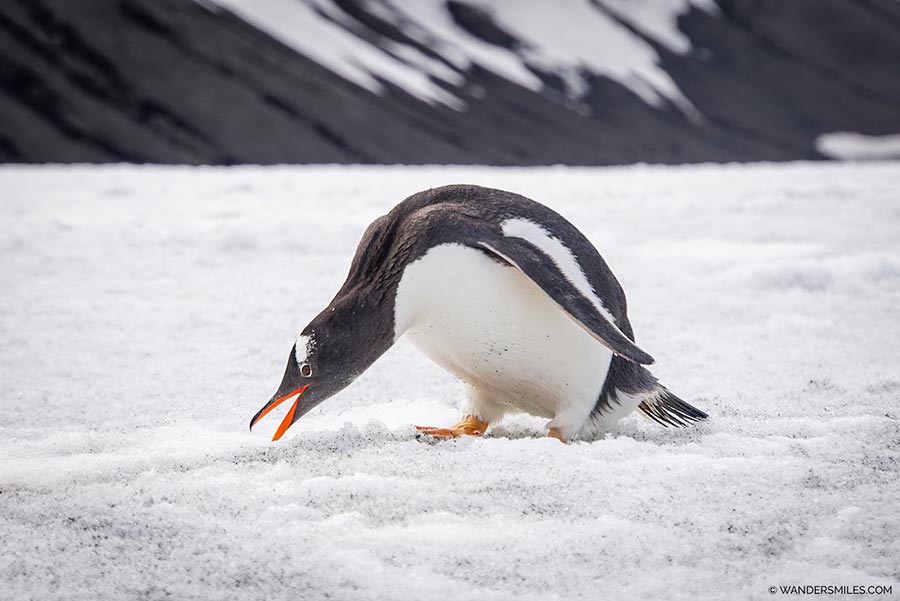 After a wonderful day exploring Deception Island, the time had come to take a dip in the ocean off Telefon Bay. Sounds easy right?

We had been working up to this all week. After all, the ‘Polar Plunge’ really is a rite of passage for Antarctic travellers. Getting out of your cosy puffer jacket and various layers to the brisk Antarctic elements, the shivers started so there was only one thing for it…. RUN!

You felt like the Chinstrap Penguins watching at the water’s edge were sniggering amongst themselves wondering why we are making such a fuss.

The thought of entering the below-freezing temperatures was worse than the actual plunging. The Weddell Seals might love to hang round in these waters but how will we cope?

Time to dunk and wave your arms around to get warm. Frantically realizing getting warm was never going to happen, it was time to run back to the shore. So the Antarctic polar plunge mission was complete.

The plungers got priority in the zodiacs back to the ship where hot chocolate and cream (with a dash of rum) were waiting to get the blood flowing again. 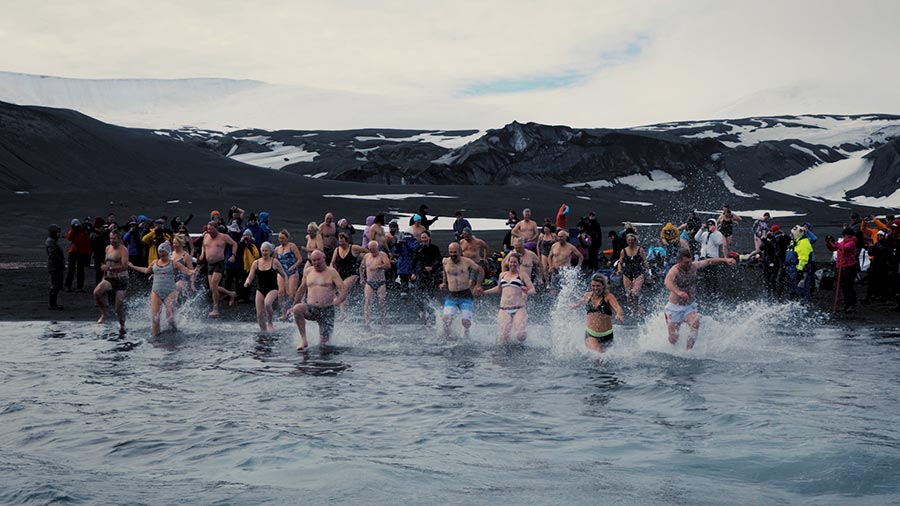 If the activities are what you want from your Antarctica trip, always check what is included in the package. Some expeditions will charge for additional activities. We opted for the Antarctica Basecamp expedition with Oceanwide Expeditions booked with World Expeditions. A trip to Antarctica can be pricey but do your research well and you will find a range of cheap Antarctic cruises to choose from.

With any holiday adventure, travel insurance should be a top priority! World Nomads is my go-to guys, I’ve learned this from experience. You can buy and claim online even when you’ve left home.  I love that they give a little back too and support community development projects in various countries.