Merv is an ancient city along the historical Silk Road near Mary, Turkmenistan. If you are a history lover, this place will be fascinating but go with an open mind as the lost city of Merv needs your imagination to visualise this archaeological haven in Central Asia.

HISTORY OF THE LOST CITY OF MERV

Merv was founded by Alexander the Great to take advantage of the plentiful water in an incredibly useful location between the Afghan highlands and the desert lowlands. It was an important capital city for over 2000 years and became one of the most prominent cities on the Silk Road.

Once known as ‘Queen of The World’ it is now a UNESCO World Heritage site and is one of the most studied archaeological sites in Central Asia. The Persians, Turks, Arabs and Greeks have all had influence here and the evidence of that is plentiful.

Merv was a city that, in her prime as a centre of religious study and trade, would have been ranked alongside Damascus, Cairo and Baghdad as one of the great Islamic cities.

The combination of faiths and ethnicities that lived together in this metropolis would have made it a vibrant, bustling and fascinating city.

In the 8th century the Abbasid revolution was launched from Merv. It subsequently became the birthplace of the third Muslim Caliphate, which brought a more inclusive, kinder style of rule to the Middle East.

The pinnacle of Merv’s history was as a vital seat of learning and the eastern most capital of the Seljuk Empire in the 11th and 12th centuries.

Sadness and brutality came to the city in 1221 when the Mongols devastated the city and its population. It is thought that over a million people were killed over three attacks in that year.

In the 15th century a new city, free of Mongol occupation, was created by the Shah Rukh the leader of the Timurid. Merv enjoyed a brief renaissance as a much smaller and less powerful but more peaceful city.

Unfortunately, history wasn’t kind and various wars continued to destroy the city. In the 18th century Merv fell into ruin and the invading Russians, who arrived in 1885, did nothing to revive the city.

WHAT YOU CAN SEE AT MERV

My feelings about Merv are mixed. The site is undoubtedly full of interest, history and the influences of various fascinating cultures but much of what there is to see has been damaged by war, time and the weather.

It’s the humbling thought that this was once noisy, colourful and aroma filled home to over 500,000 people. A city that had been powerful and important enough to be fought over is now gone forever.

One of the most interesting features of the lost city of Merv for archaeologists and curious tourists is that it is made up of five separate cities from different ages of history. Over aeons of time and several ruling dynasties Merv was expanded rather than built over and the ruins of buildings artefacts and fortifications are now scattered over a vast area of otherwise barren plains.

Erk Kala – the earliest of the five separate cities of Merv

The Erk Kala fortress is a vast monument to lost power. It would have served as the centre of life in ancient Merv with the city square secure within the solid walls. It is now just a huge mound of mud brick and sand made smooth by the harsh heat and weather.

The site has archaeological artefacts in abundance and pieces of pottery, material and bone from thousands of years ago can often be found having been recently uncovered by erosion, wind and the footsteps of visitors. 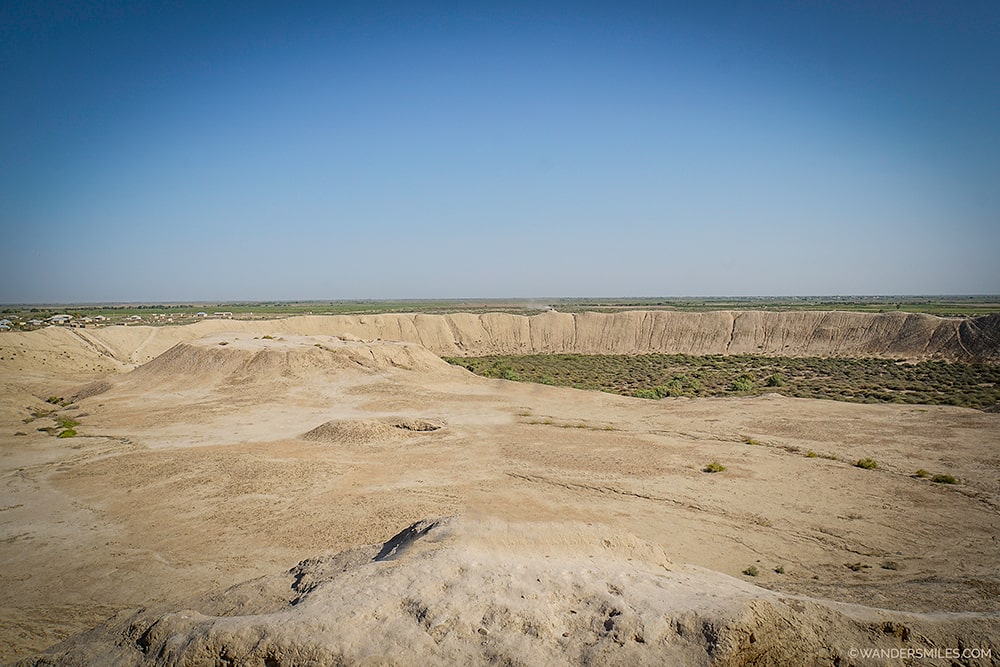 Gyaur-Kala – the second city of Merv

This is one of the biggest structures in the city and covers over 300 hectares of land. It is an impressive example of ancient architecture and appears to be a city within a city with towers and entryways on each wall.

This is the medieval area of Merv and is the incarnation of the city which was destroyed in the massacre and devastation wrought by the Mongols in 1221. The ruins are a haunting memorial to the people, nearly a million, who died that year.

The 38m-high Mausoleum of Sultan Sanjar, located in what was the centre of Sultan Kala, stands out as one of the last remaining tombs which started renovation after 1990 and is now a listed as UNESCO World Heritage Site. 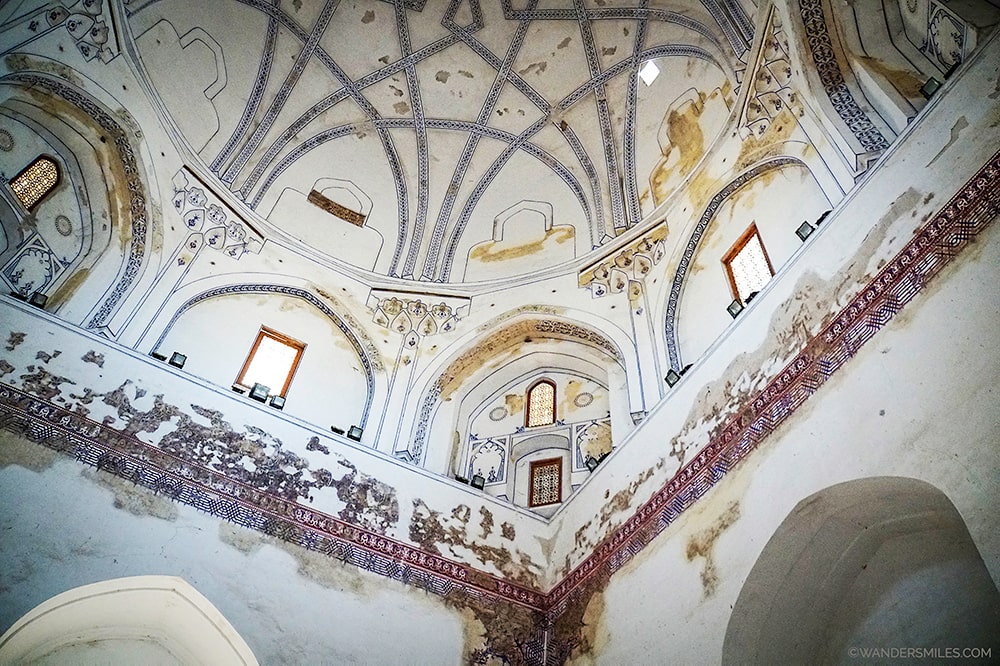 Interior of the Mausoleum of Sultan Sanjar 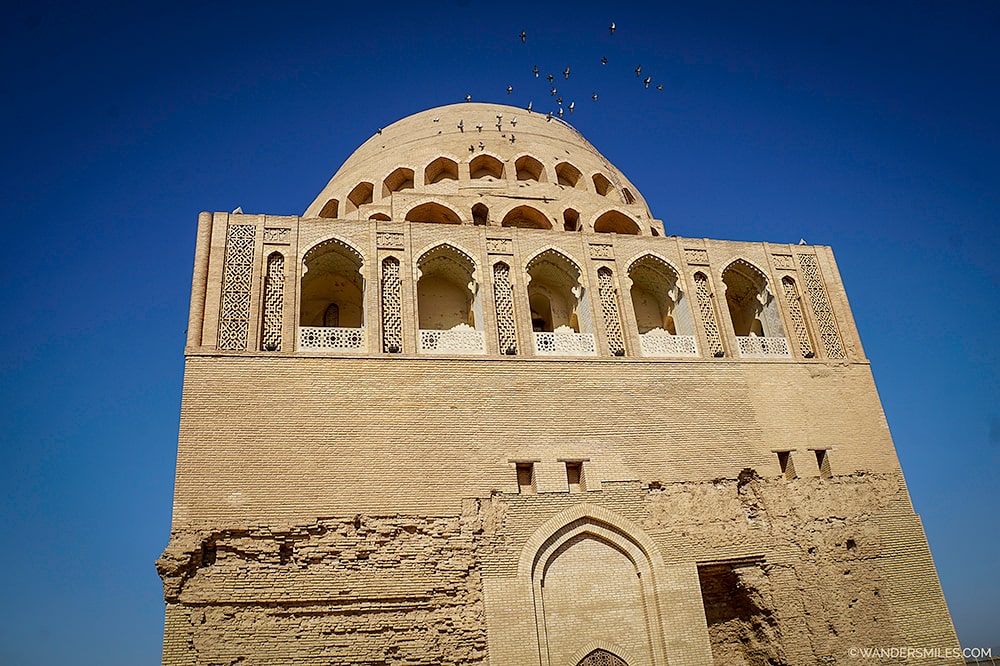 This is the city which marked the re-invention of Merv by the Timurid Empire in the late 14th century. It is 1km south of Sultan Kala.

The newest of the five cities and built to the west of Abdullah-Khan Kala. The ruins are set out in a rectangle and were built in the 18th century and in use until the early 19th century. By the time the Russians arrived in 1885 they were already abandoned, and the bricks were used for new construction by the most recent invaders.

It doesn’t look much like a castle now and the only indication of its prominence is the elevated position and size. This single storey mansion type house was the residence of a powerful Merv family between the 9th and 13th centuries.

The Great Kyz Kala is a fortified building that is thought to have been built in the 7th century. It’s purpose and use are mysterious, but it is one of the most well-preserved buildings in the city and recent excavations have discovered rooms, flooring and a staircase so it may have been the home of someone very powerful. 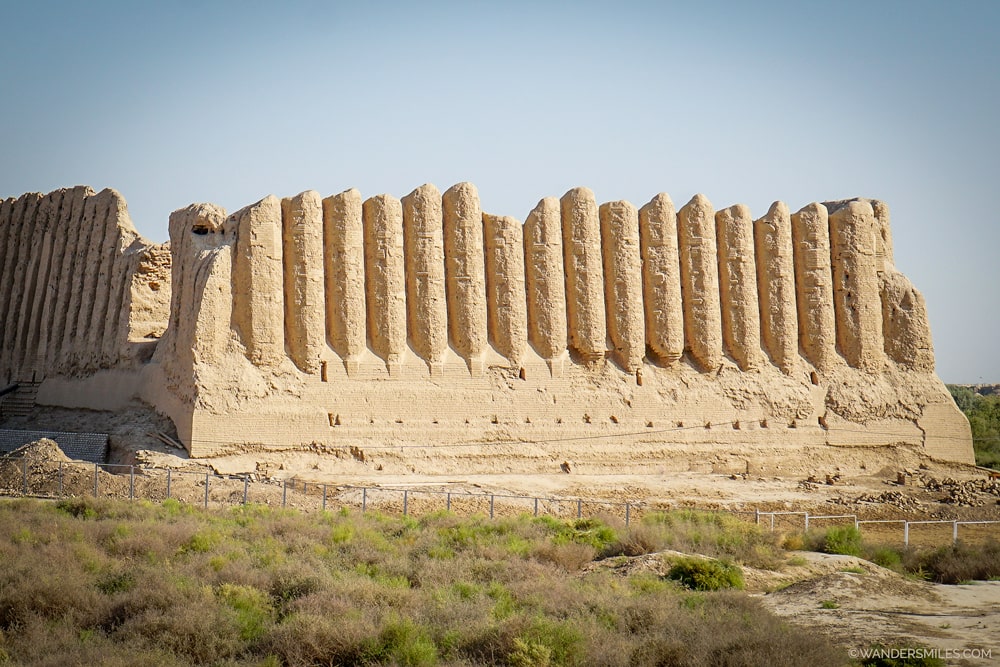 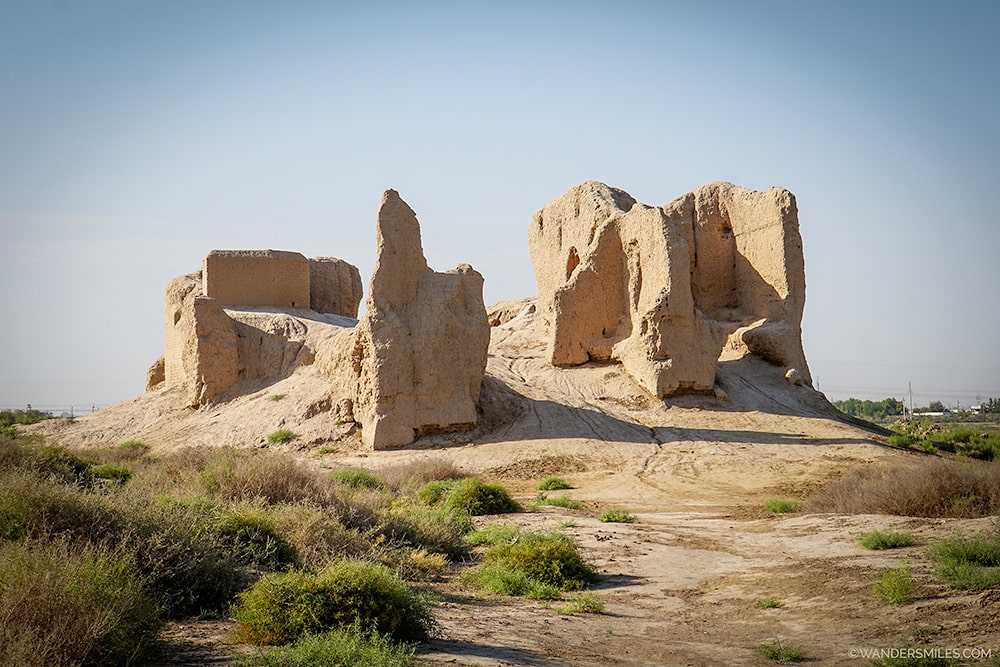 WANT TO EXPLORE MORE OF TURKMENISTAN? CHECK OUT THE DESERTED WHITE MARBLED CITY OF ASHGABAT AND THE DARVAZA GAS CRATER

How to get to Merv

By road: The journey will take around 5 hours from Ashgabat. If you choose to get a taxi, expect to pay $75. Not so bad if there’s 4 of you!

By train: If budget matters, the train from Ashgabat to Mary is super cheap at around $8 but you will need to endure a 7 hour commute. Might be an idea to get the overnight sleeper and save on a nights accommodation.

By plane: This is the fastest mode of transport with a 40 minute flight with Turkmenistan Airlines to Mary for around $75.

For the weather, March to early June and October to December, are the most pleasant months to visit the Merv. Summer can reach highs of 50°C so exploring this large site can be near on possible in this heat.

Avoid Sundays as Merv is closed on this day.

Our trip to Turkmenistan and Uzbekistan was organised by Trekkup so the guide came with the trip. This is the easiest way to guarantee the knowledge on the lost city of Merv.

On arrival, we were given some background history on the ancient city before we went to explore. You could ask the team there to give you a tour.

Always make travel insurance a priority for any adventure! World Nomads is my go-to guys, I’ve learnt this from experience. You can buy and claim online even when you’ve left home. I love that they give a little back too and support community development projects in various countries.

Disclosure: This post may contain affiliate links, which means I may receive a small commission if you click a link and purchase something that I’ve recommended. It comes at no cost to you. Thank you for your support.

8 Best Places to Stay in Beijing | Hostel to Luxury Hotel