As you cruise through Turkmenistan’s capital city of Ashgabat, you will be aghast at the white marble buildings, the ornate street lamps, the golden monuments, and perfectly manicured gardens. The attention to detail really is outstanding but when you’re spending billions of dollars, it really should be. You might be mistaken in thinking there is a public holiday in the city as there is a distinct lack of people and cars… where is everyone?

It’s not surprising that Dark Tourism describes Ashgabat as “one of the strangest cities in the world. It has quite aptly been described as a kind of cross between Las Vegas and North Korea’s Pyongyang.”  Here are a few ideas on what to do in Ashgabat, the deserted white marble city of Central Asia;

THINGS TO SEE IN ASHGABAT

A short drive from Ashgabat, you can the Walk of Health, a concrete stairway that runs alongside the treeless Kopet Dag mountains. There are 2 walks – one is 8km and the other 37km. We took the 8km route in the blistering heat and in true Ashgabat-style, there were ornate gold statues along the way of different animals.

President Saparmurat Niyazov of Turkmenistan built the Serdar Health Path to improve the health condition of the citizens. He made an example of his entire cabinet, cheering them on as they struggled their way up the path, he’d been flown to the top by helicopter due to a heart condition, and he died in 2006 of a heart attack. 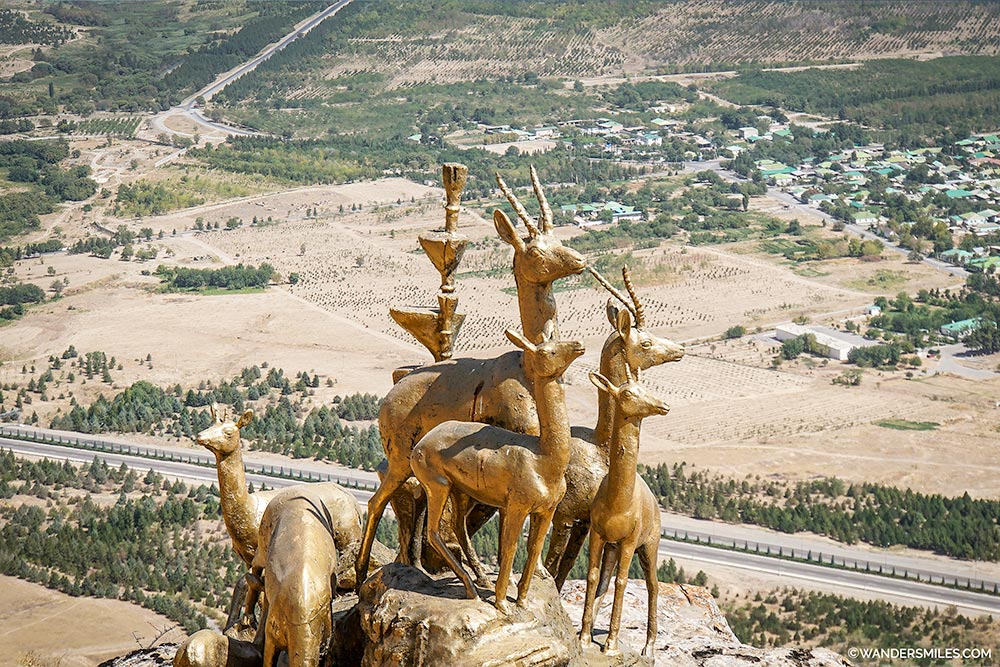 Gold statues on the Walk of Health

The Wedding Palace “Bagt Koshgi” (Palace of Happiness) was inaugurated in 2011. The three-step structure is crowned by a cube with a ball with a diameter of 32 metres displaying the map of Turkmenistan. Besides the 22-room hotel, the Palace of Happiness includes six luxurious halls for marriage registrations, seven banquet halls, numerous shops, and other different facilities necessary for wedding arrangements such as beauty salons, wedding dress boutiques, and photo booths, and more. Apparently, you can get a divorce here too, the people of Ashgabat say you are brought happiness either way… married or divorced! 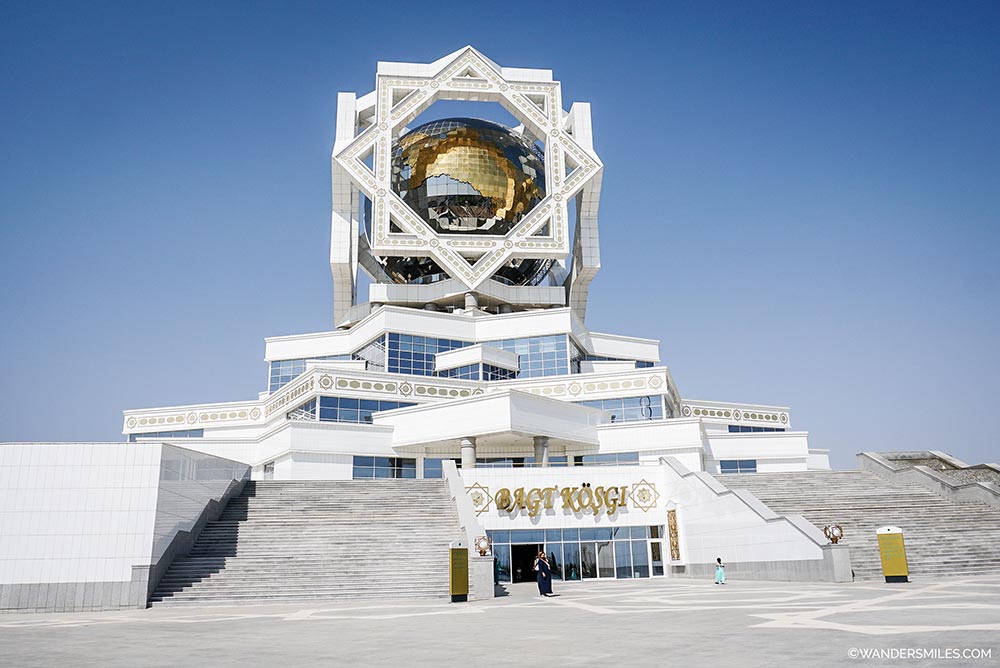 Not surprisingly, Turkmenistan’s  Independence Monument is more flamboyant than any other in the world. It is built on 84,500 square metres of land with an abundance of landscaped gardens, pools, and fountains.

The design of the monument is inspired by traditional Turkmen tents and the headdress worn by Turkmen girls. There is a huge golden statue of the dictator, Niyazov, outside the dome surrounded by 27 statues of Turkmen heroes. Within the dome are exhibition halls featuring artwork related to the history of Turkmenistan.

The independence date of Turkmenistan is 27 October 1991. The Independence Monument commemorates this date with a 27-metre steel construction, an observation platform of 10 meters in diameter, and a 91-metre Minaret-style tower. 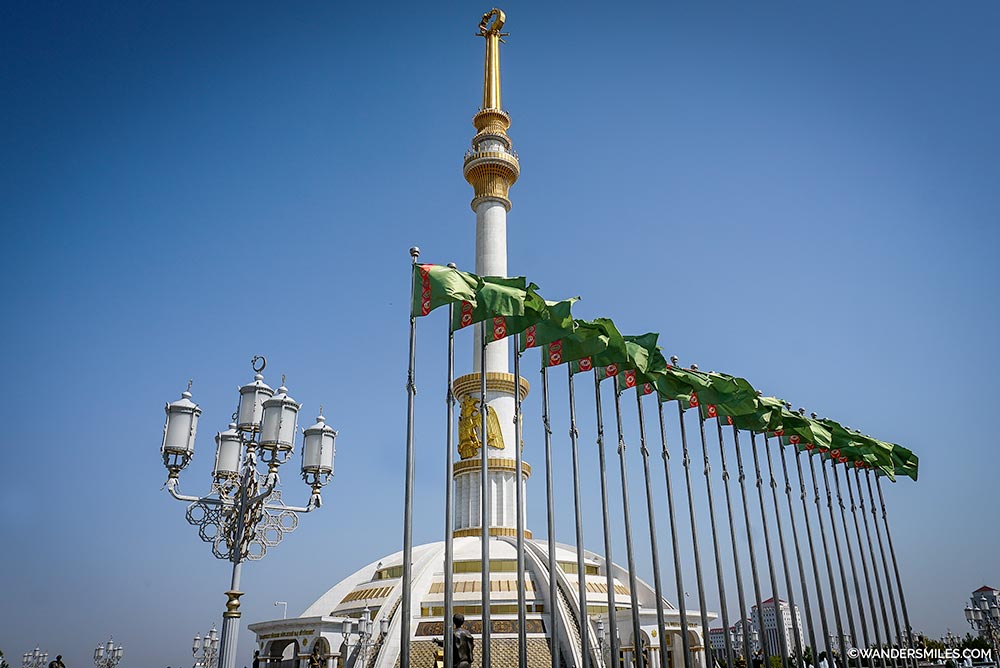 On the opening of the Palace of Happiness, Turkmenistan President Gurbanguly Berdymuhamedov introduced strict rules to highlight the importance of family values and respecting traditions. Among these were ordered to Turkmen newlyweds to plant trees and visit monuments on their wedding day. We were lucky to crash the traditional wedding celebrations outside Independence Park, they were more than welcoming pulling us in to dance with them! 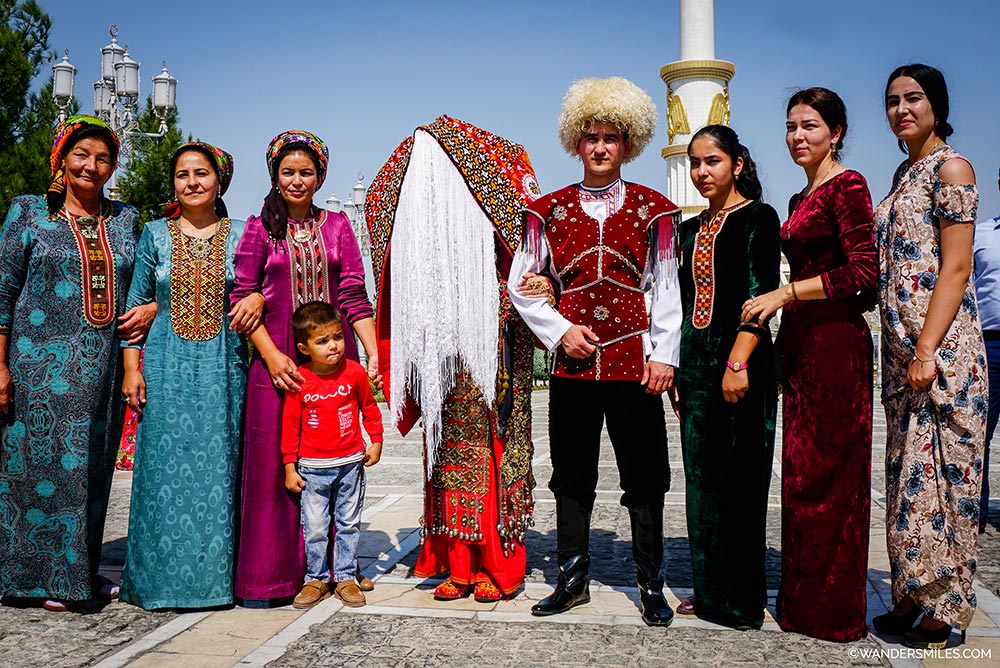 Wedding celebrations at the Independence Monument

The three-legged arch, known locally as “The Tripod”, was built in 1998 on the orders of Turkmenistan’s President Saparmurat Niyazov to commemorate the country’s official position of neutrality. The structure is 75 metres in height and costs a mere $12 million to construct. The monument has a 12 metres high gold-plated statue of Niyazov on the pinnacle which rotates so the great leader’s face is always facing the sun. The statue was illuminated at night. The arch features a panoramic viewing platform, pretty cool to get an aerial view of the regimented lines of trees, garden design, and white marble. 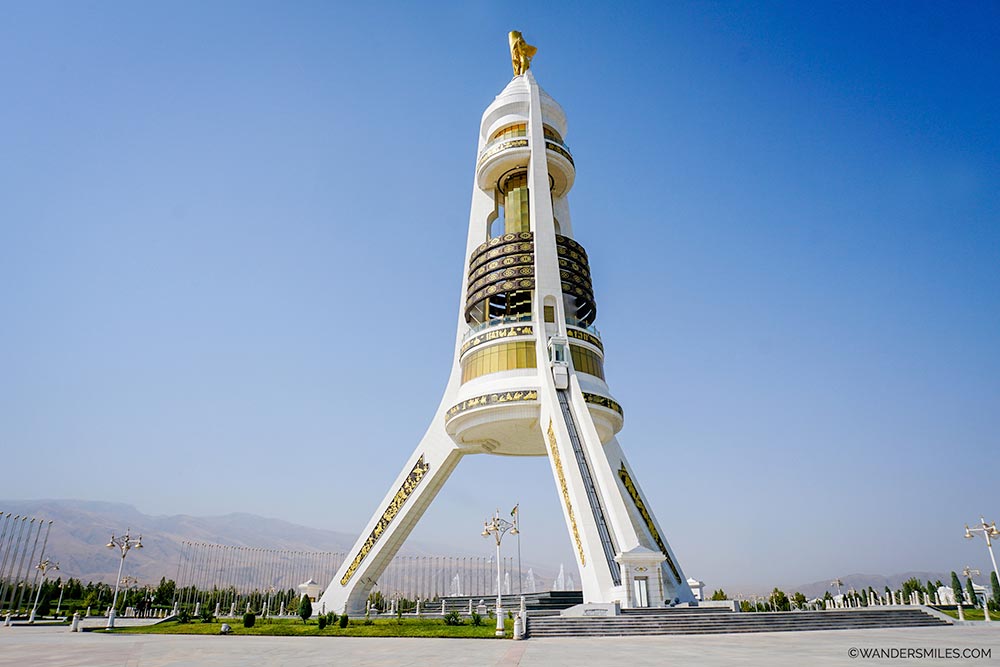 Monument Ruhy Tagzym is dedicated to the victims of the 1948 Ashgabat earthquake. The 10 metres high bronze sculpture, represents a bull holding the Earth on his horns, and a woman trying to save her baby.

Monument Baky şöhrat (Eternal glory) was unveiled in 1970 in honour of the 25th anniversary of the Victory in the centre of Ashgabat. This new monument was updated and now the four 27-meter high steles embodying the unfolding flower were replaced with five steles with a base in the form of an eight-pointed star.

Monument Milletiň ogullary is to remember the heroes who died during the battle near Geok Depe, as well as commemorate the heroes of other battles for the Motherland. 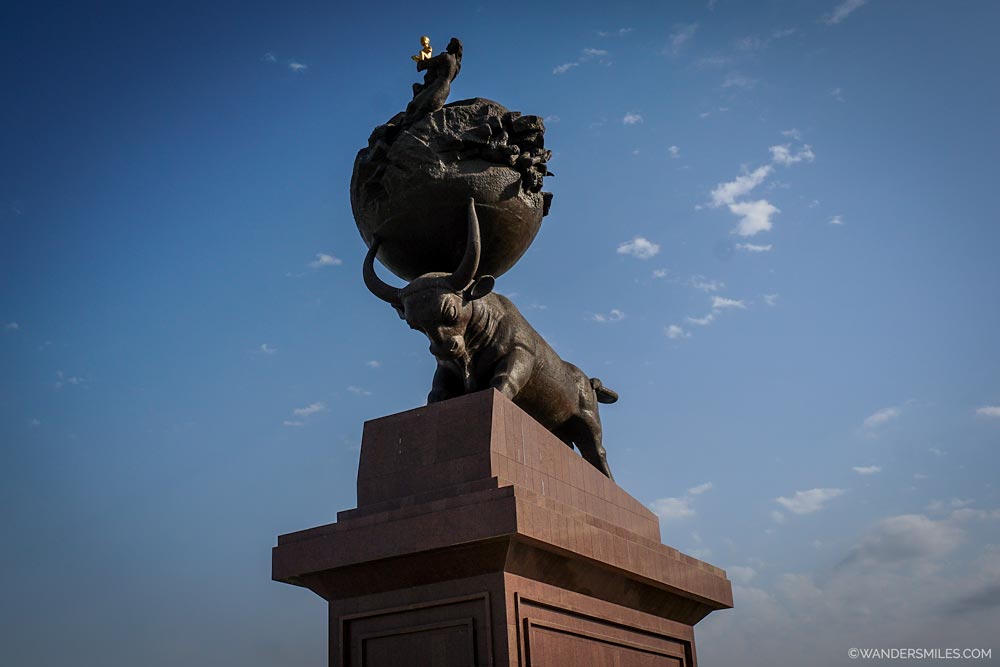 Alem, meaning ‘Universe’, has been awarded the Guinness World Record for the largest indoor Ferris wheel ever made. There were barriers for people to queue, however, you may be surprised to know we were the only people in the queue. The wheel provides 24 cabins. It measures 47,60 metres high and has a diameter of 57 metres. 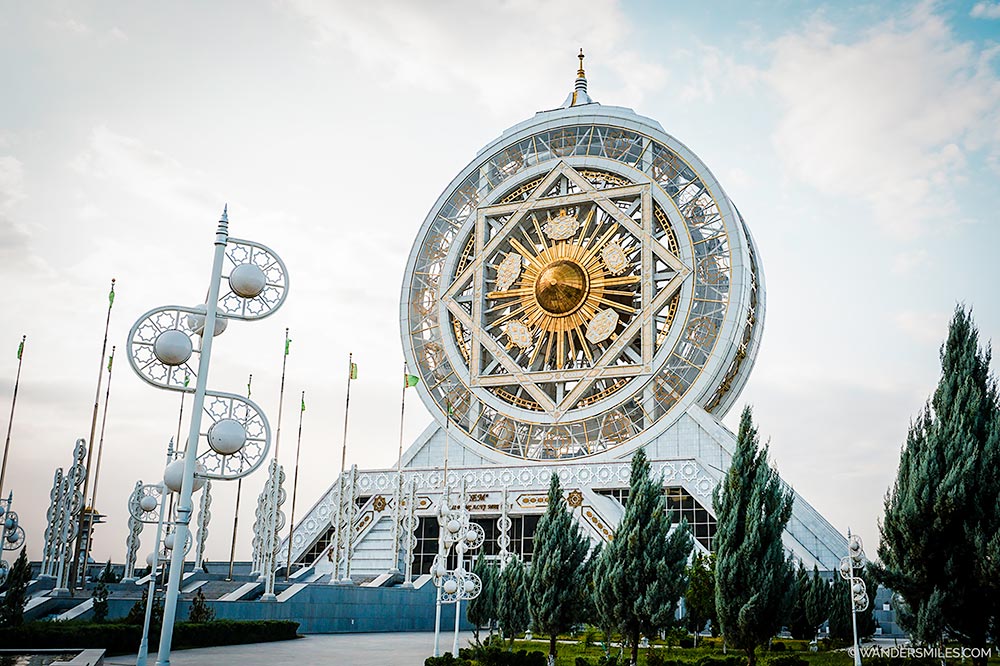 Located 7 kilometres outside of Ashgabat in the village of Gypjak stands the largest mosque in Central Asia. It is adorned with a huge golden cupola which is 50 metres in diameter and 4 tall minarets 91 meters high (significant date of 1991 Turkmenistan independence), this mosque certainly gets noticed!

Turkmenbashi Ruhy Mosque or Gypjak Mosque is built by Turkmenbashi, Turkmenistan’s first president-dictator, in his mother’s honour but is now buried alongside her in the mausoleum. Texts of the Ruhnama, the former president’s moral guidebook, are chiselled into the marble, extolling Turkmenbashi as the only leader Turkmens should follow. Is this why it usually sits empty even though it can house 10,000 worshippers? 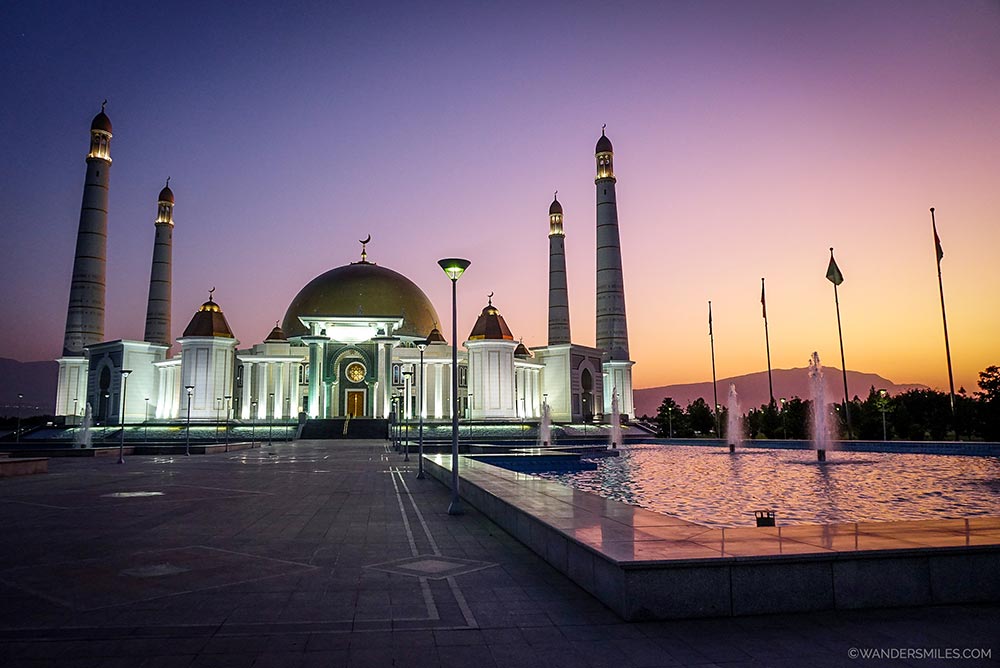 On our return from Darvaza gas crater in the Karakum desert, we visited Tolkuckka-Basar, also known as Altyn Asyr bazaar, it is the largest market in Turkmenistan, and the fifth largest in central Asia. It is located just outside Ashgabat in the residential area of Choganly. The market covers over 150 hectares and there are more than 2000 shops separated into sections, you can buy anything from toys, spices, fruit, and locally manufactured carpets to live sheep.

Keep in mind that carpets older than 50 years cannot be exported, while others need an export certificate. It was actually refreshing to see people in Ashgabat, although we were warned not to take photos of the locals. 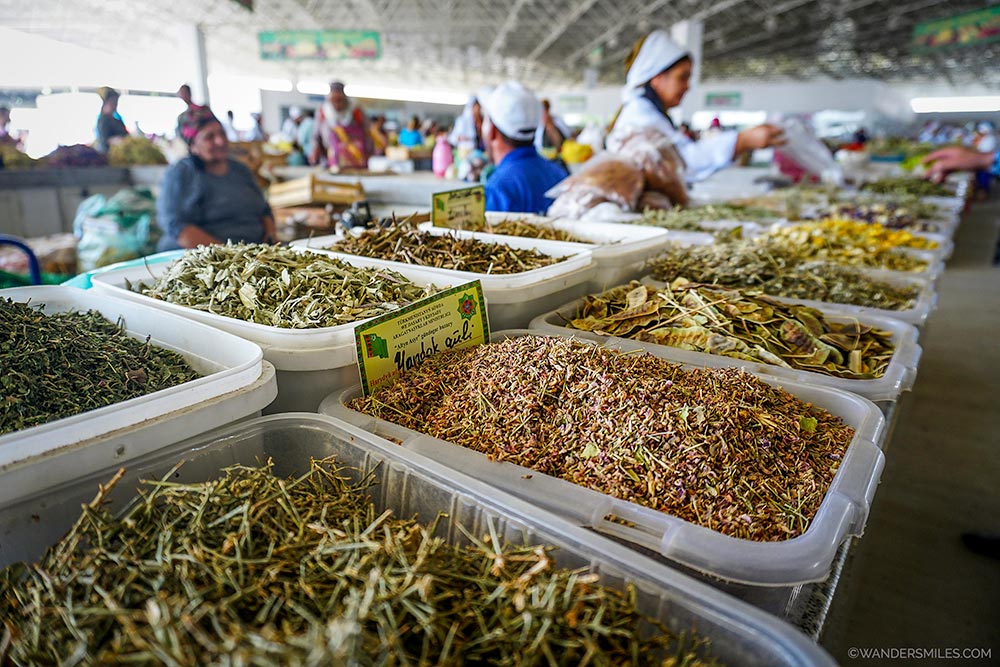 WANT TO EXPLORE MORE OF TURKMENISTAN? CHECK OUT THE DARVAZA GAS CRATER

WHAT YOU NEED TO KNOW ABOUT ASHGABAT

Whilst Turkmenistan is of one the 11 hardest countries to visit, it is possible! To obtain a tourist visa on arrival, you must be booking a tour no matter which country you are from. You will need to supply an LOI (letter if invitation) issued by a travel agency licensed in Turkmenistan Tourist or business visas on arrival, they are processed quickly at Ashgabat airport (around US$100), as well as being available at certain border crossings.

If you are on a transit visa that allows you to visit for up to 5 days, you are not required to obtain the visa and LOI. There has been a high rejection rate of Turkmenistan visas in the past but 2018 seems to be more positive.

Your tour company will need to register you with the State Service for the Registration of Foreign Citizens (OVIR) – make sure they have done this within three working days.

Our trip was organised by Trekkup Dubai and our flight left from Dubai to Ashgabat via Turkmenistan Airlines, however, other airlines fly to this destination including Turkish Airlines, Lufthansa, and Emirates. There are a variety of companies that organise Turkmenistan tours that collect you from Ashgabat airport.

The manat is the currency of Turkmenistan. It was introduced on 1 November 1993, replacing the Russian ruble. Check budget planners to ensure you take enough cash with you for your entire stay. ATMs are non-existent and cards rarely accepted, so keep a supply of both US dollars and manat.

Best time to go to Turkmenistan

Summers are very hot and the winters are very cold, the best time to visit Turkmenistan is during either spring or autumn. Otherwise, it’s always a fabulous idea to travel when there are festivals or events in Turkmenistan.

Local laws to be aware of in Turkmenistan

Turkmenistan is a country under dictatorship and with that comes laws that you are advised to be wary of.

Always make travel insurance a priority for any adventure! World Nomads is my go-to guys, I’ve learned this from experience. You can buy and claim online even when you’ve left home.  I love that they give a little back too and support community development projects in various countries.

SHOW THE LOVE AND PIN THE BLOG FOR LATER! 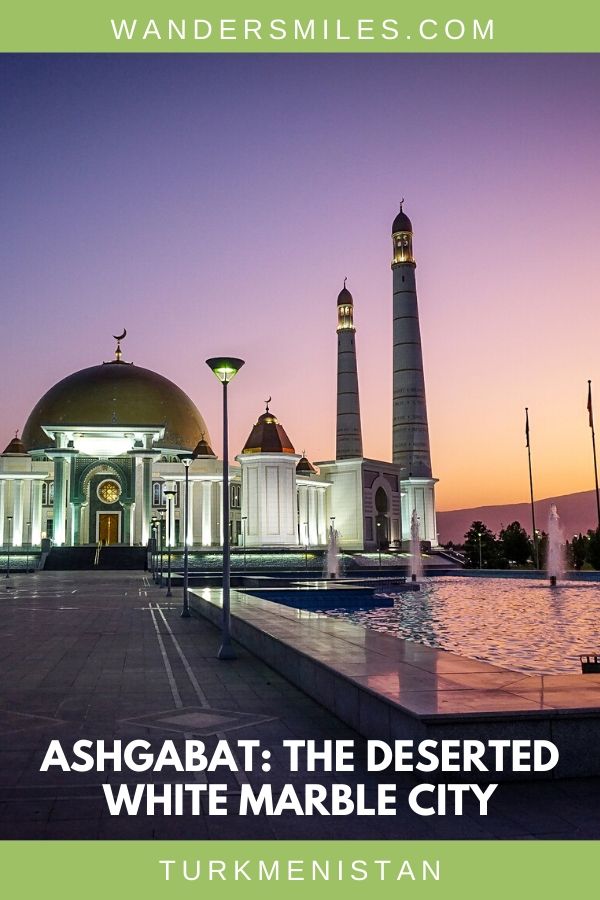 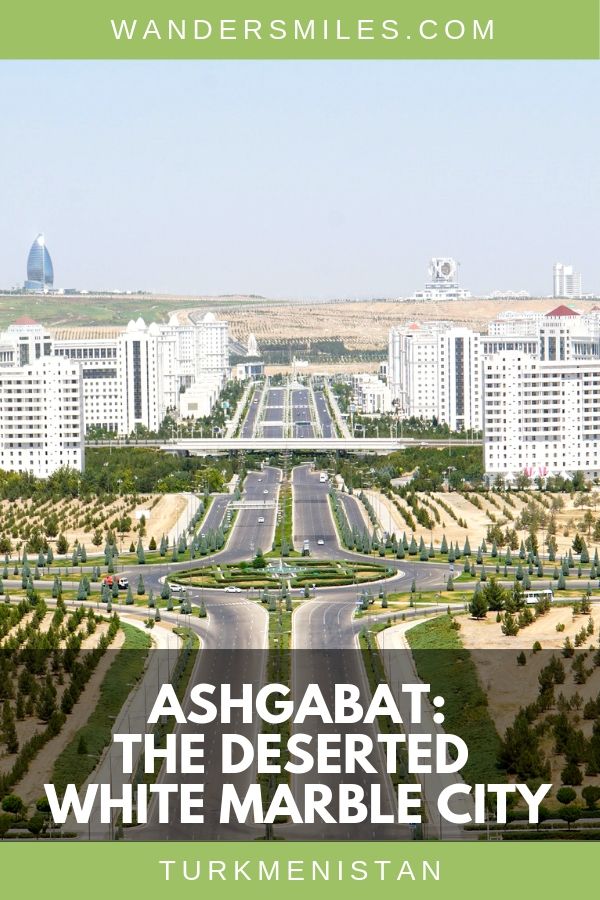 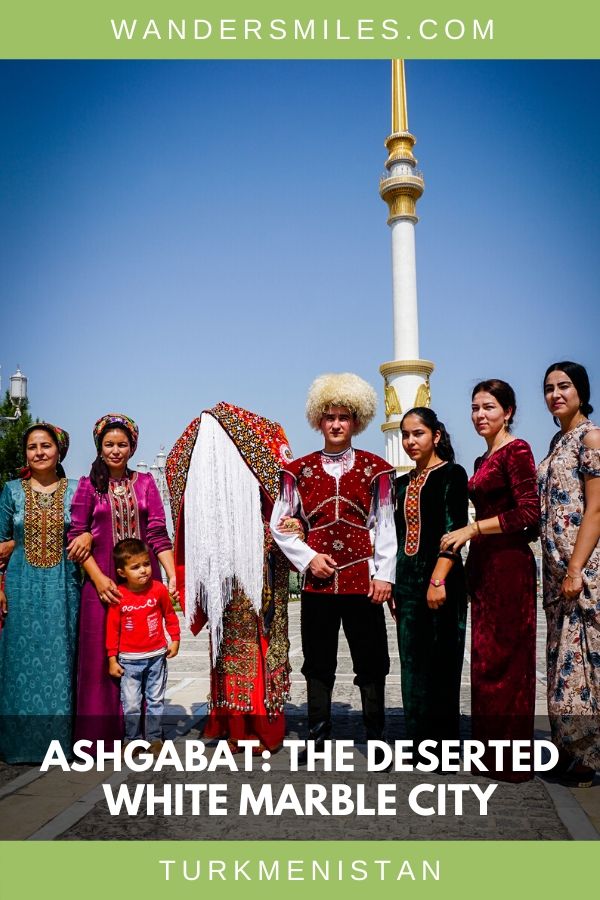 Great article and pictures of Ashgabat. This is a fascinating country and I hope I will get to visit there one day!

Thank you for the compliments! Turkmenistan is a very interesting country to visit, Ashgabat is certainly fascinating!

I hope I’ll get to see this city and more of Turkmenistan. It’s fascinating. The city looks beautiful with all those interesting and white architecture. The world doesn’t know much about this part of the world, so that would be a trip of a lifetime. Thanks for the insight 🙂

It is a fascinating country – one well-worth discovering before there is too much tourism! Hope you get to visit soon 🙂