Visit Chernobyl exclusion zone, Pripyat ghost town and the power plant is a trip into an eerie, apocalyptic world that you’re likely to re-visit in your nightmares.

Reactor Four of Chernobyl nuclear power plant went into meltdown at 1.30am on the 26th April 1986. The resulting steam explosion killed two workers instantly and started the biggest nuclear disaster in history. Over the next few weeks 250,000 people were evacuated from 150 cities, towns and villages in an area 30km squared. Initially the evacuees were told that they would be returning to their homes in three days but that immediate retreat away from the power station was needed. Residents left their lives behind and the vast majority didn’t return.

HOW TO VISIT CHERNOBYL EXCLUSION ZONE

A visit to the Ukraine is not complete without a guided tour of the Chernobyl area and it is entirely safe. As long as you follow certain rules a full day tour will only expose you to the same amount of radiation as on a two hour flight.

Tours to Chernobyl must be undertaken with a reputable company and have a licensed guide. You will need your passport for the military checkpoints stationed in the area and safety warnings and guidance must be followed.

Our guide gave us simple advice to protect ourselves from possible exposure to radiation. Don’t smoke, don’t eat anything from the trees such as berries, don’t take away souvenirs and don’t put personal belongings down on the ground. Radiation suits, Geiger counters and gas masks are not needed, just common sense. 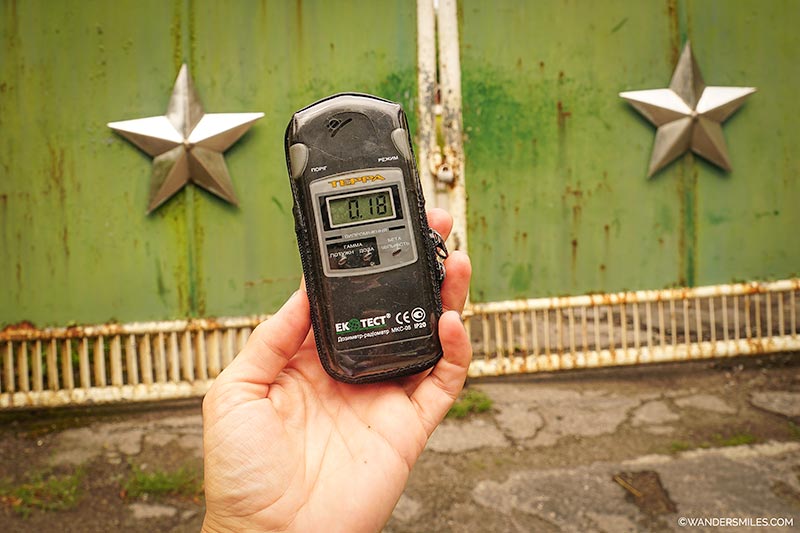 Setting the scene of Chernobyl

On the bus journey from Kiev we watched documentaries on the disaster, this was great as it set the scene for what we were about to see. The history of Chernobyl, the day of the disaster itself and the Russian response to it should be understood to fully appreciate your tour.

The nuclear fall-out from the 1986 explosion was four hundred times the strength of the Hiroshima bomb. The 50,000 people living in the town of Pripyat, built for the workers at Chernobyl and their families in 1970, went about their normal lives for a few days after the disaster before being eventually told by Russian authorities about the danger they had been exposed to. This led to the illness and deaths of large numbers of the population from acute radiation sickness.

Dytyatky checkpoint is the official entrance into the exclusion zone and when we arrive suddenly an ordinary sunny day sightseeing in a new country is made sinister by heavy military presence and strict signing in and out process.

Chernobyl itself is pretty much a ghost town. There is a community of scientists and engineers who look after the ruined power plant site who need houses, shops and churches. It was these men and women who in 2017 completed the construction of a second sarcophagus, a huge arch, to cover the reactor after the original protective mechanism began to fail. 300 metres away from us, as close as we are allowed, the hulking edifice sits with quiet menace.

Time stopped in Chernobyl in 1986 so the statues celebrating the heroes of communism remain here though the rest of the country was stripped of them by the Ukrainian government. There is an imposing statue of Lenin in the town, he is stood as though he is about to come alive and begin a speech on his political ideals.

There is a display of some of the vehicles used to clean up the contaminated debris, one robot was meant to land on the moon or another was used at the bottom of the sea – none of the robots were really up to the task forcing the Soviets to send in soldiers to do the job. During the clean-up, each person could only afford to spend a maximum of 45 seconds inside or near the facility. Many of them died as a consequence of the exposure or later contracted cancer. 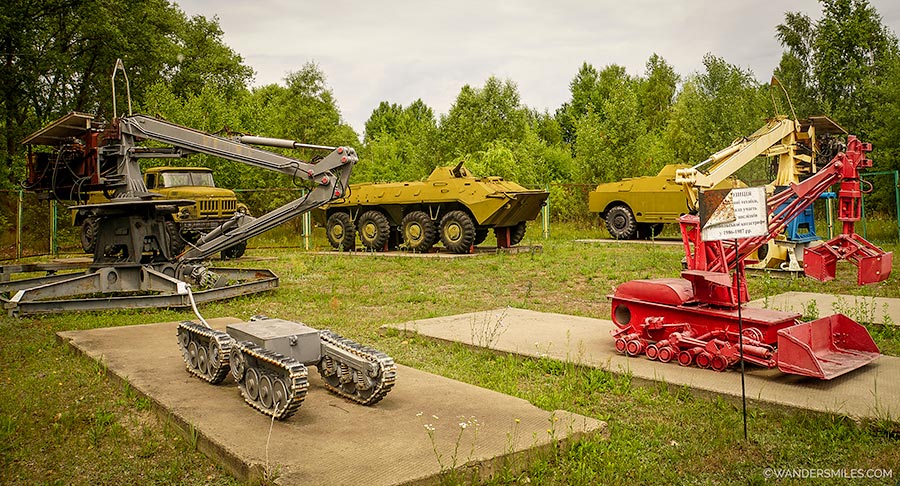 For me one of the most moving parts of the tour was the Firefighter’s Monument. It is a beautiful piece of art depicting the men who ran towards mortal danger in the early hours of the 26th April 1986. Their astonishing bravery meant that further explosions were prevented and a much bigger, totally catastrophic disaster was diverted. The monument is rightly entitled ‘To those who saved the world’. Most of the men died shortly after the disaster from acute radiation sickness having absorbed lethal doses while fighting a further melt-down. 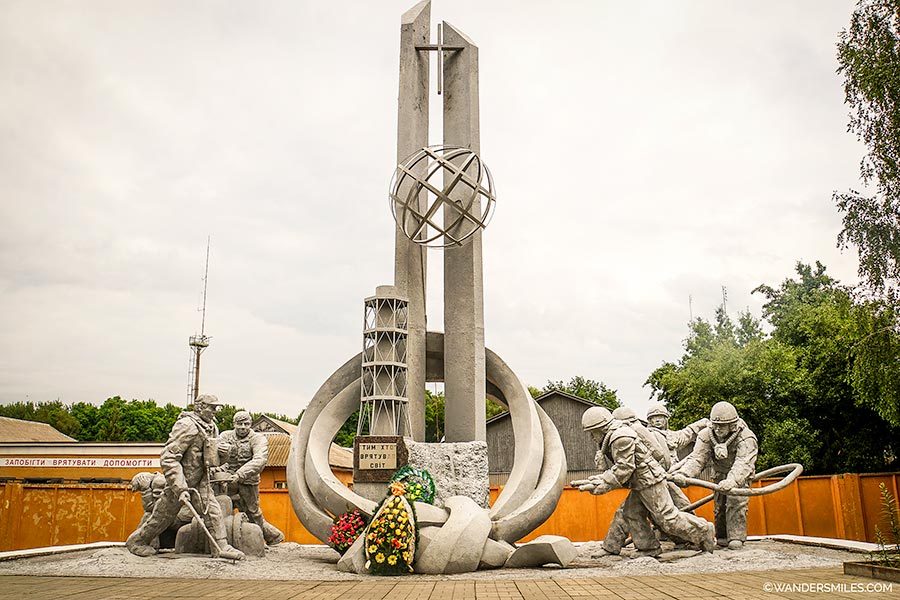 During the dying days of the Cold War, the Soviet Union built an early warning detection system to listen out for NATO and U.S. ballistic missiles. Duga Radar system was known for its constant tapping noise and so became as The Russian Woodpecker. This huge steel construction was so powerful that it would interfere with radio receivers. There is a radiation warning sign there but this is just for tourists! 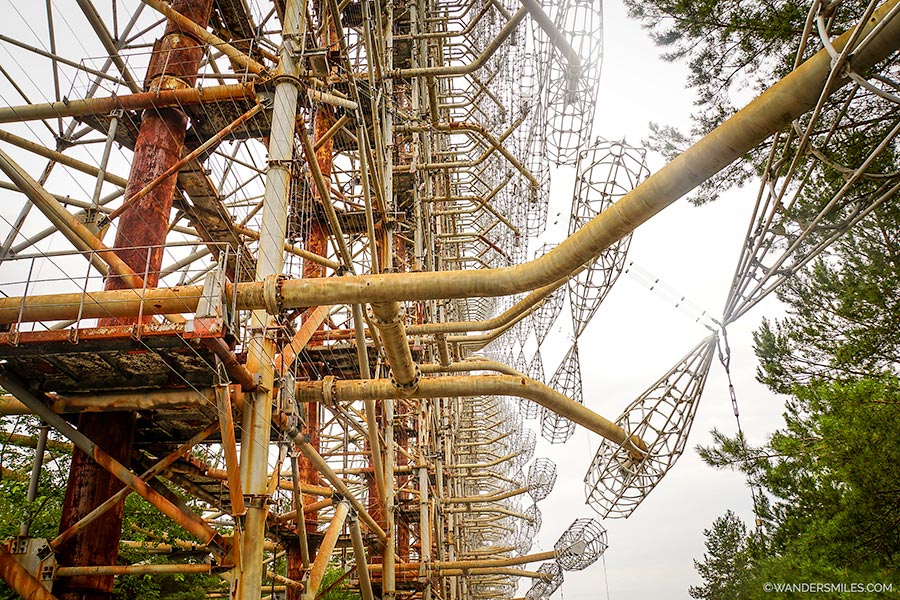 Walking through an abandoned school was strange, there must have been so much activity there is years gone by. Now you wander through the gym and ironically the chemistry class and it has a very sad feeling about it. 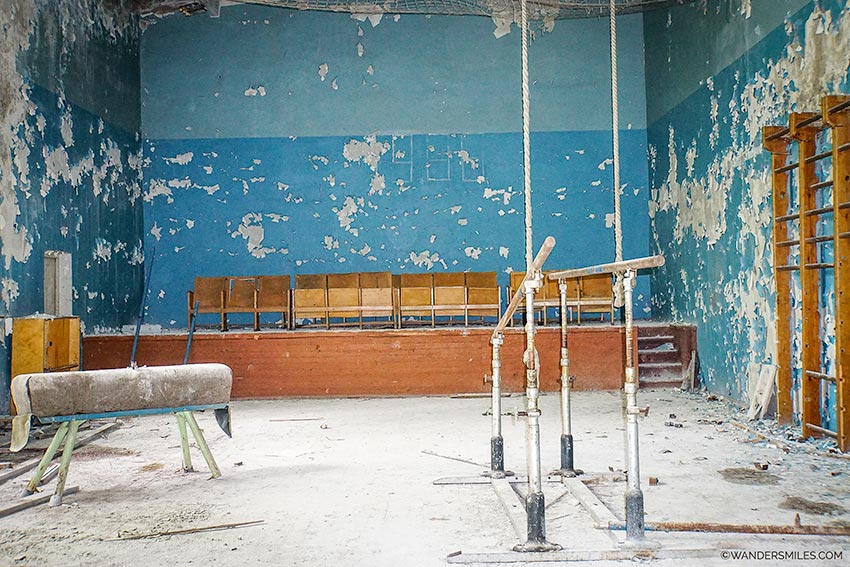 Lunch in the canteen at Chernobyl

We are ‘treated’ to lunch in the Chernobyl state canteen. Before we’re allowed in we are scanned for radiation. It reminds me of a film called Silk Wood with Meryl Streep, a true story of Karen Silkwood who blew the whistle on alleged dodgy practices at the plutonium plant she worked at. It’s an unpleasant reminder of the potential for future nuclear disasters.

The food is basic and plain servings of soup, meat and rice so if you do find yourself on the tour bring snacks! I feel a little mean complaining as there must be few deliveries of fresh and luxurious food this close to the power plant and growing your own crops is highly dangerous. 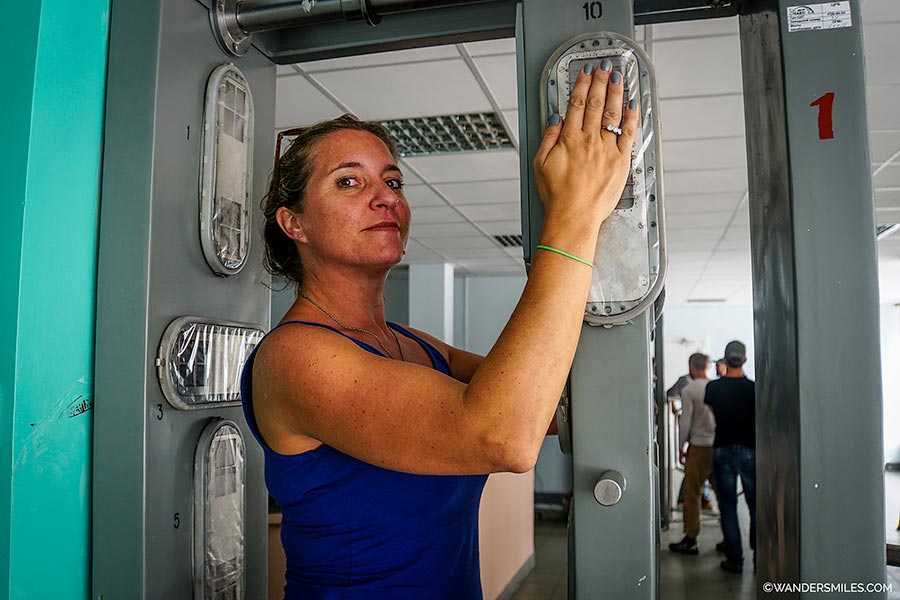 RELATED ARTICLE: WHY WE SHOULD VISIT AUSCHWITZ-BIRKENAU

As we travel through the zone into the radiation soaked interior it would be easy to miss the abandoned villages that have been swallowed up and almost buried by nature. Our guide took us to spooky abandoned nursery schools with toys disintegrating into the dust of the playground never to be played with again. We also saw a few of the houses of the ‘self settlers’, mostly elderly people now, who were allowed back to live isolated lives in their old homes.

As we trundle into Pripyat we are met by a skinny but very handsome fox. He’s called Simon and was raised by the guards in the town so is super friendly and loves to come and say ‘Hello’ and receive treats from the tourists. 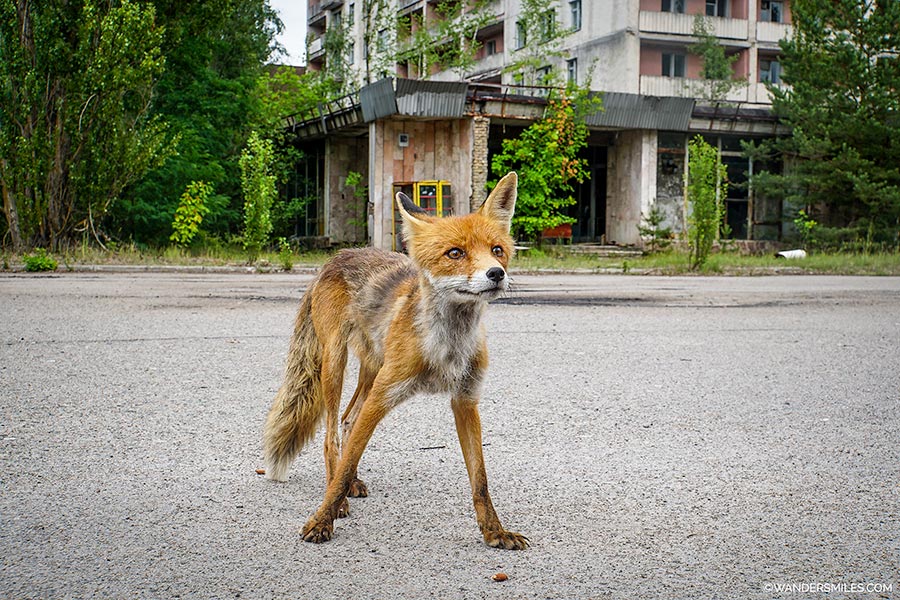 One of the strangest but most cheering phenomenon of the Chernobyl zone is how nature has flourished with the absence of humans. It is an eco-system that has swiftly revived. In 2014 European brown bears were seen in the exclusion zone for the first time in over a century. Undergrowth, trees and wildlife has taken over completely and they seem unaffected by the levels of radiation we are so frightened of.

When it was built in 1970 Pripyat was a state of the art, luxurious town where everyone was connected by the Chernobyl power plant. I was taken aback by the scale of the place. Huge tower blocks, shopping centres and leisure centres are abandoned and desolate.

The most chilling part of Pripyat is the amusement park which apparently opened the day of the incident, it acted as a distraction whilst the residents whilst they waited to be evacuated. A giant fairground wheel towered over us, it has never turned or carried laughing children and the dodgems sit sadly amongst the rubble. 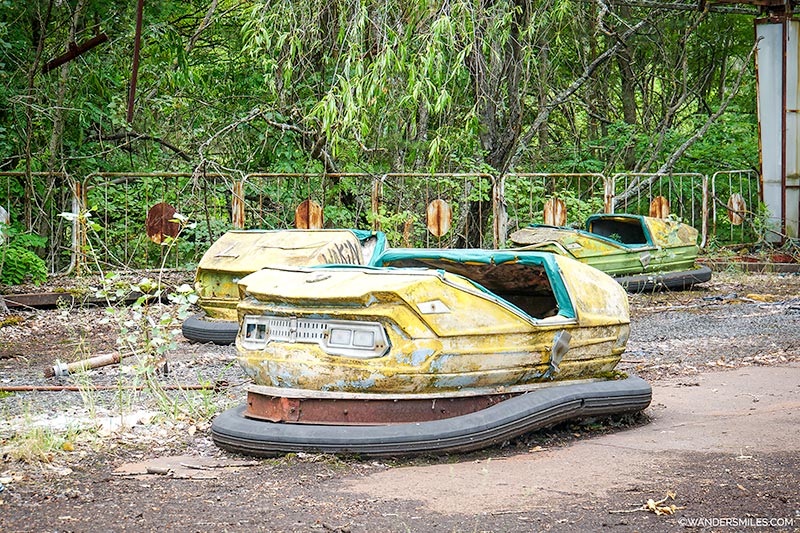 Entry into the apartment blocks is forbidden but we managed to sneak in and take photographs of the homes which were deserted during the evacuation. I imagined that the kitchen tables would be set for the next meal and bedrooms would have covers still crumpled from someone’s last night of peaceful sleep in their own home, this is not the case. There has been so much looting from Pripyat that the rooms are practically stripped. It’s almost unbearably sad to think of these families suddenly homeless and in fear for their lives. 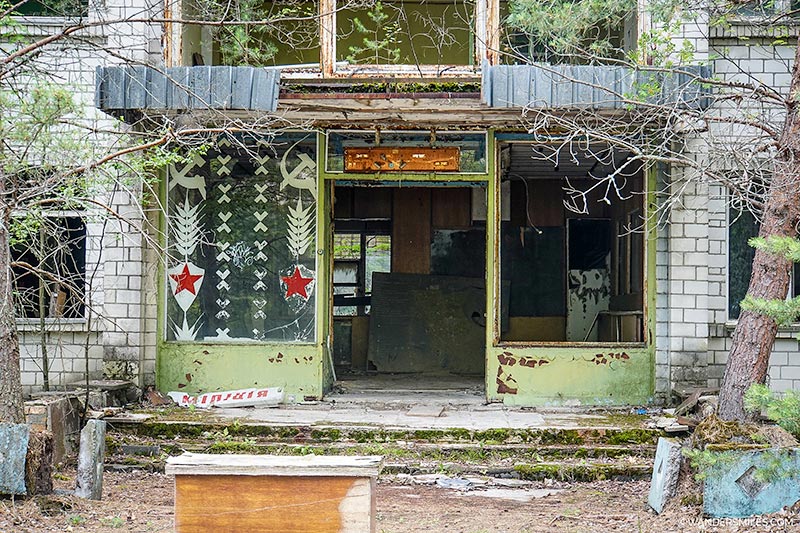 Feelings about the Chernobyl tour

After a long tiring day full of fascinating but bleak stories and information from our guide, we started the journey back to safer, less spooky parts of the Ukraine which is a relief. Even though I know it is safe to spend a short amount of time here it is still a niggle at the back of my mind that everything is poisoned. I remember the Chernobyl disaster reported on the news and in the papers very clearly when I was a child, seeing it in person made this a chilling reality.

Who has seen the HBO ‘Chernobyl’ series?  The programmes were gripping but following the dramatisation of the nuclear plant disaster, the site became very popular with the ‘wrong’ type of tourists.

Who is the ‘wrong’ type of tourist? The kind that are there for the selfies and not to listen about the history and empathise with the people whose lives were changed forever.

Whilst the increase in bookings is great for the local tour companies, over-tourism at Chernobyl has its’ downsides. As we walked around abandoned town of Pripyat, we did not bump into any other groups. With more tourists, this will be a totally different experience.

There’s lots of fabulous city tours in the Ukranian city of Kiev but you should take a day out to visit Chernobyl exclusion zone. It takes around 2.5 hours to get to Chernobyl from Kiev. Tours usually leave Kiev at 8am and you will be back by 8pm, it’s a long but fascinating day. To get a more in-depth experience, sign up for a 2 day tour.

What to wear to Chernobyl

To visit Chernobyl exclusion zone, you must must wear long trousers (not shorts), long sleeve shirts/jackets and closed shoes.

Every visitor has to have a valid passport at all times – this is obligatory. In order to get permission to enter the Chernobyl exclusion zone you need to be at least 18. This restriction is due to the fact that the human body is still growing under this age and it is much more vulnerable.

Restrictions for conduct on the Chernobyl tour

Advice on taking photos at Chernobyl

Whilst it’s safe to place tripods on the ground, ensure you wipe the bottom as you leave to avoid taking radioactive particles with you.

Drones require a permit which needs to be organised 10 days prior to your tour. Drones are not allowed by the territory of the Chernobyl nuclear power plant – this is the same when taking photos by the plant too.

Make travel insurance a priority! World Nomads is my go-to guys, I’ve learnt this from experience. You can buy and claim online even when you’ve left home.  I love that they give a little back too and support community development projects in various countries. 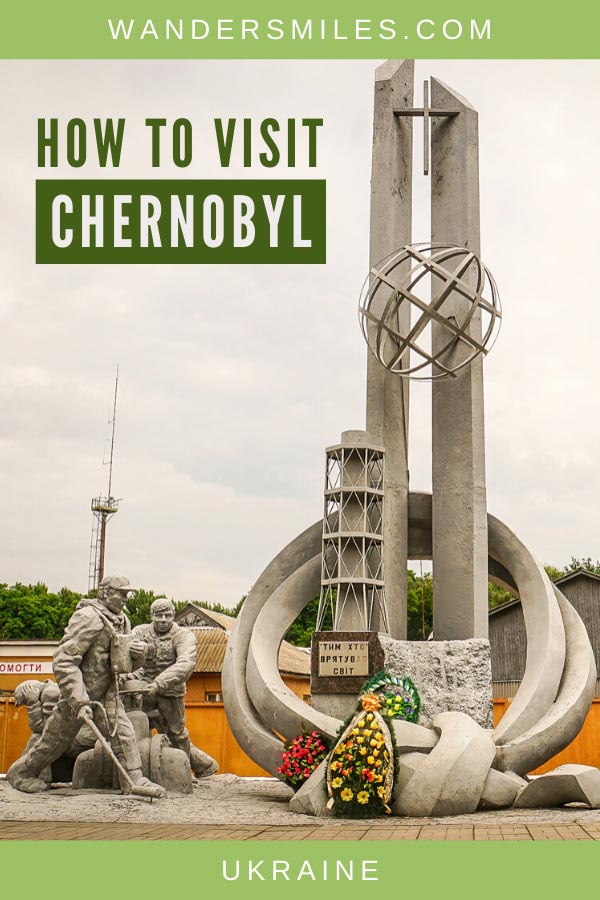 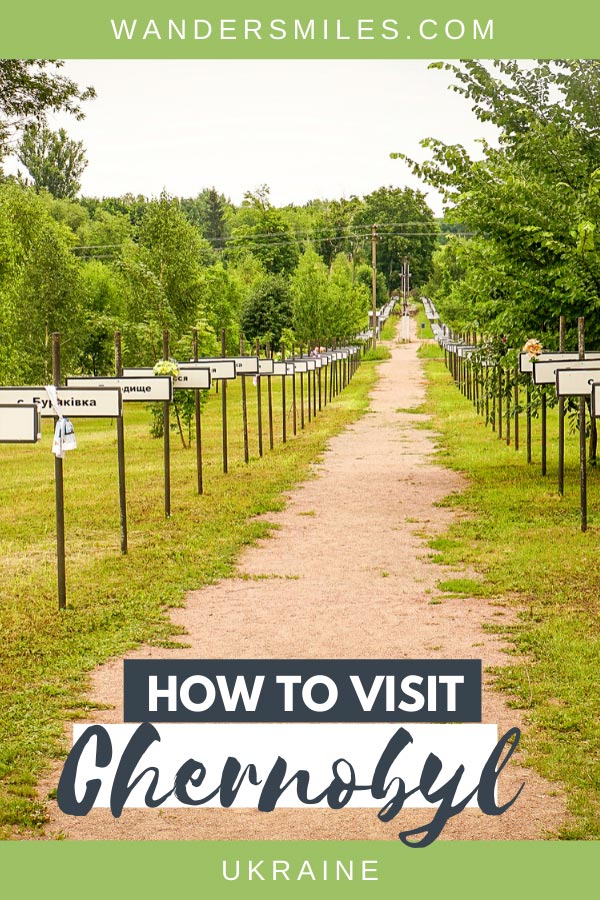 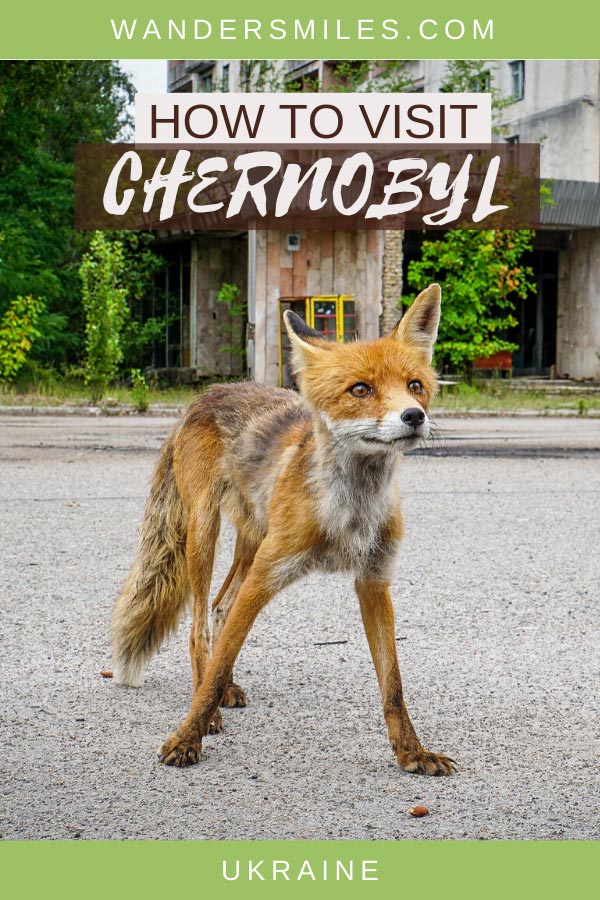 Wow! That was a fascinating read!! Thank you!

THANK YOU! It was such an interesting day, certainly put it into perspective seeing the devastation left behind.