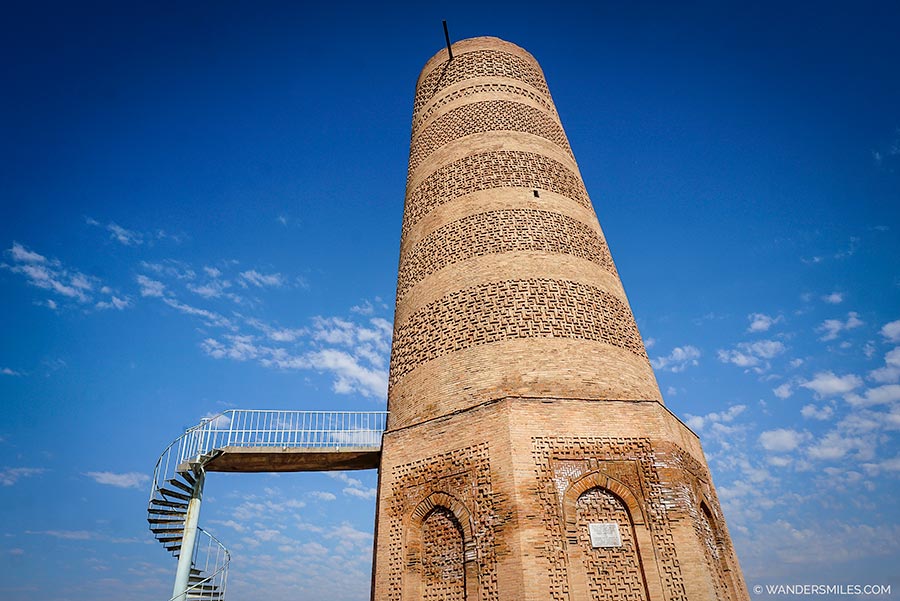 Kyrgyzstan is a stunning country with a rich and fascinating history. It was once a very powerful civilisation that thrived as an important location on the Great Silk Route. When visiting Burana Tower, the only remaining evidence of the vibrant city of Balasagun, a modern traveller will be following in the footsteps of thousands of ancient nomadic traders.

Burana Tower, the 25-metre ruin of a once-proud 40-metre minaret, is one of Kyrgyzstan’s most important and recognisable historical locations. It is a poignant, lonely relic of a city that flourished during one of the most significant eras of cultural and commercial exchange.

Visit Burana and step into a wilderness of imposing mountain ranges and lush meadows bizarrely peppered with touching monuments, fortifications, and architectural beauty.

The legend of the Burana Minaret is the story of a father’s love for his daughter. A local King was over-joyed by the longed-for birth of a baby girl. He threw a party to celebrate and asked wise men and clairvoyants from all over his country to attend.

Happy life of many years was predicted for the princess by all but one of the fortune-tellers. This man predicted she would die from spider bites by her 16th birthday.

The Khan (King) was horrified by the single portent of doom and so the tower was constructed as a safe home where his precious child lived in isolation. Food and drink were carefully inspected and winched up to the tower in baskets.

On the afternoon of the princess’ 16th birthday the Khan, full of happiness that the prediction had been proved wrong, rushed to the tower bearing a gift of grapes. In his joyful haste, he forgot to check for spiders and as she took a grape his daughter was bitten and died.

The Khan’s grief was so loud and raw that his tears rocked the tower with such force that the top fell to the ground. (It was, in fact, caused by an earthquake in the 14th century but that would get in the way of the telling of a heart-breaking fairy tale!) 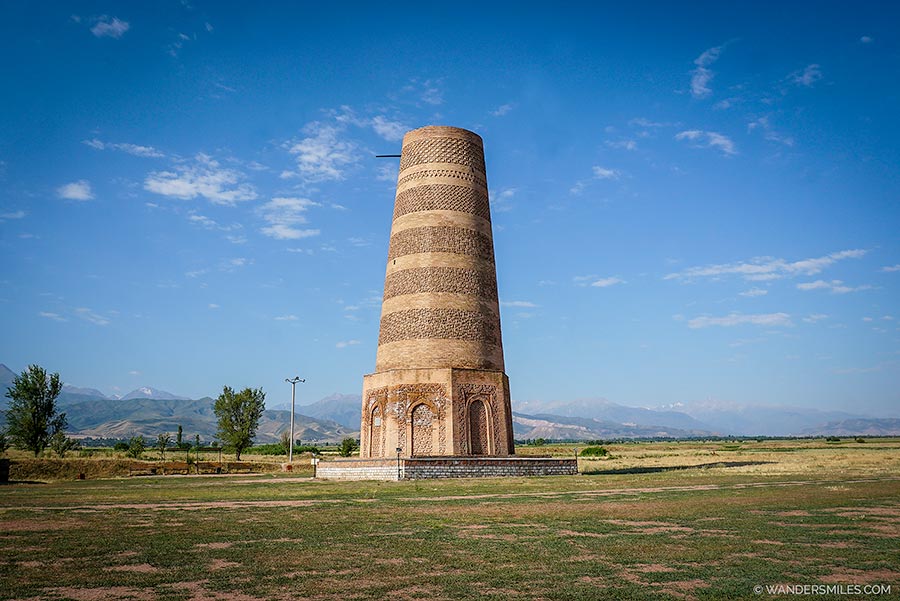 Burana is the earliest example of this elaborate style of minaret. Constructed in the 11th century, it’s a wonderful testament to the skills of the craftsmen of the day. The decorative geometric brickwork is incredible to behold.

The first foundations of the Balasagun settlement were laid in the 10th century by the Karakhnids, Kings who ruled a vast empire which stretched from China to the Aral Sea in the East of Central Asia. Balasagun became the populous capital city of the empire, a hub of politics, religion, and culture.

In 1218 Mongol soldiers entered the city and violently ended the reign of the Karakhanids, Balasagun’s influence waned and by the 14th-century earthquakes and a lack of investment meant that the city was in ruins.

Discover the Balbals at Burana Tower

The complete devastation of a city that was once filled with people is a great source of sadness, even many hundreds of years afterward. Burana Tower was a place of worship for men, women, and children with hopes, disappointments, and loved their families and friends. The Balbals, on the plain below Burana Tower, are a magical reminder of some of those individuals.

Balbals are ancient markers for the tombs of notable people within Central Asian and Mongolian societies. ‘Baba’ is a Turkic word for ‘ancestor’, it is the source of the name ‘Balbal’, a tradition of commemoration that originated in the 6th century and ended in the 19th. 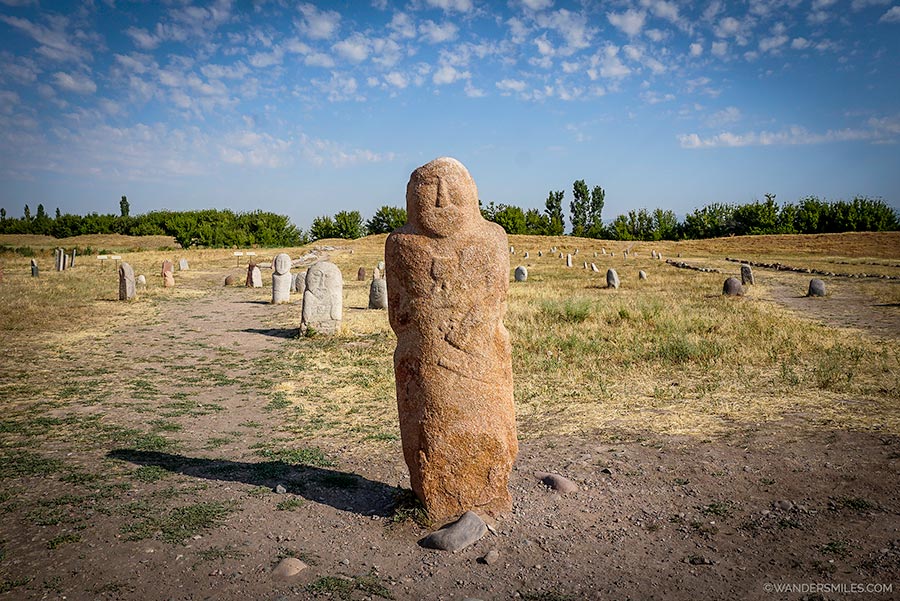 The stones that mark each grave are only crudely shaped like people however the faces of them can be remarkably full of expression.

Most balbals depict warriors or tribe leaders and will have a sword carved into the stone.

The small dishes that this stone community sometimes hold ensure that they will not go hungry in the afterlife. If a cup of tea or wine is nestled in the crook of an arm then the person you are gazing at was a Nestorian, an early Christian.

During the first year after the death, it was believed that the statue held the soul of the deceased and would be cherished in the home of their loved ones. Then the Balbal would be placed on the burial site facing east, the source of the early morning sun, and all the warmth and light it creates.

There is so much to learn about anthropology from the Balbals of this specific area of Kyrgyzstan. The variety of age and style teach us about the evolutionary changes to how Central Asian people lived and thought about death and memory. 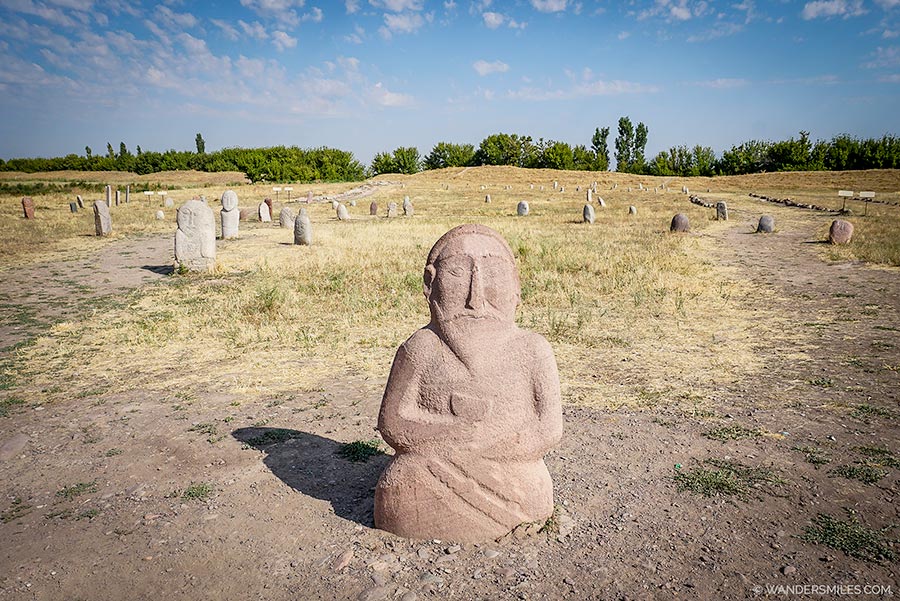 Escape the city of Bishkek on a half-day guided tour with round-trip hotel transfers to make life easy – it’s a haunting place that is worth exploring.

If you think Burana is a place that will capture your imagination or you fancy climbing to the top and getting to know the Balbals, then a solo trip is perfectly do-able too!

The entry fee to the tower is 60 som. Be careful if you intend to climb and take in the lovely view from the top as it’s dark! The cost of a visit to the small museum is 40 som.

PLAN AHEAD FOR YOUR KYRGYZSTAN TRIP