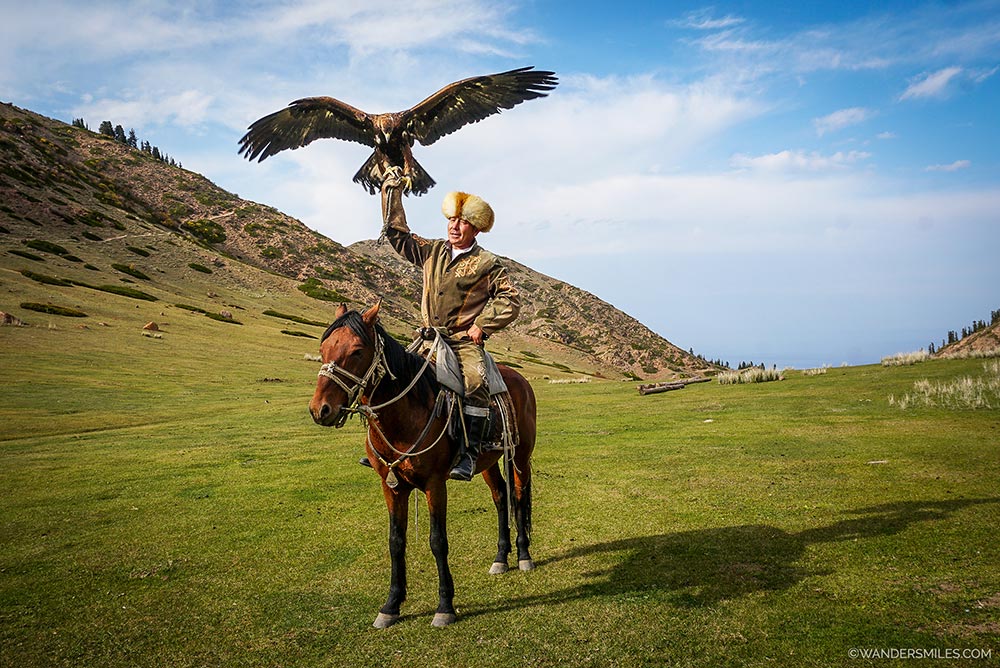 Eagle hunting in Kyrgyzstan is an ancient tradition that was once suppressed by outsiders but is now proudly preserved by the nomadic people who call the high Central Asian valleys home.

Hunting with berkut (the golden eagle) began as an efficient and moral way to hunt for food and furs but has developed into a way of conserving nature and cultural heritage while encouraging communication within and between different communities.

The tradition of Eagle Hunting in Central Asia

Eagle Hunting in Kyrgyzstan is a fascinating tradition and is considered a ‘must-see’ by visitors to this incredible country.

The hunters are called berkutchi and their ancestors have been prowling the plains of Central Asia for thousands of years. These men and their birds were the heroes of their villages as they brought back precious sources of warmth and nourishment.

These nomadic rituals were passed between father and son for many, many generations until the Russians occupied Kyrgyzstan. The Soviet-era saw the nomadic people of Asia forced to live in villages. Their unique way of living was nearly lost under the brutal pressures of communism.

Happily, the freedom allowed the nomads to flourish once more, and while the Eagles are not as needed as they once were, Kyrgyzstan is a country determined to preserve this ancient survival technique.

Why eagles are used for hunting

Eagle hunting in Kyrgyzstan was initiated by benevolent people who didn’t enjoy the idea of using man-made weaponry to kill creatures for food, they felt it was more humane to use their prey’s natural predator, the eagle.

Training birds of prey as a sport and form of hunting is usually connected with falcons and hawks but, for the hunters of Kyrgyzstan, they are woefully inferior in comparison with the power, intelligence, and precision of the golden eagle who they refer to as ‘the bird of God’.

Villages in the wilds of Kyrgyzstan no longer rely on eagles to provide necessities but the deep communion between man and bird now acts as a connection to their ancestors, a rite of passage for young men, and a way to bring pride to the family. 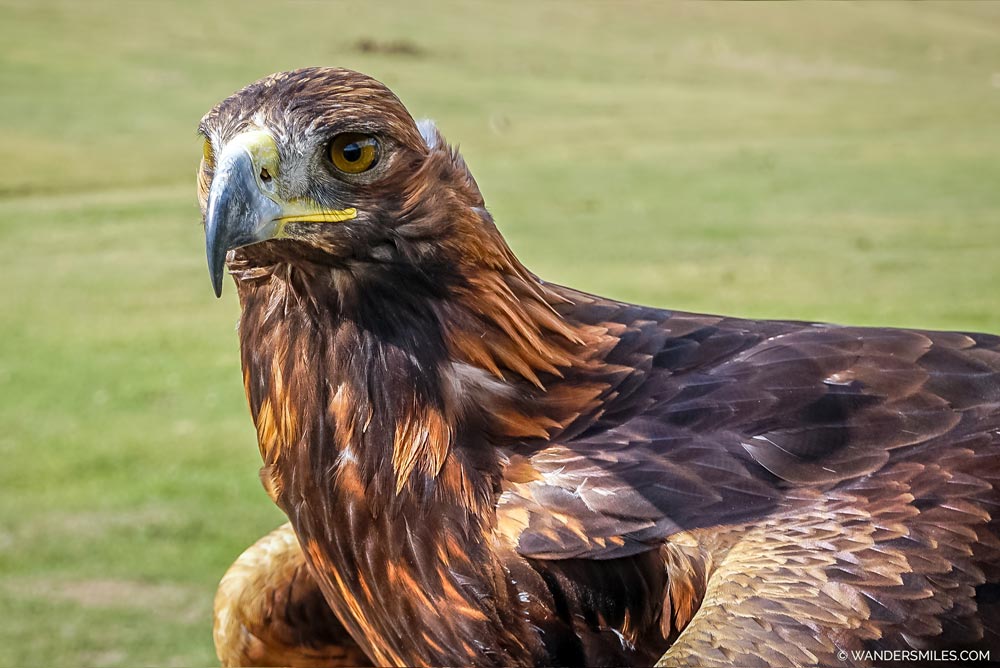 The Art of Training Eagles

How they train the golden eagles

At the beginning of his journey, a berkutchi must either capture a wild eagle or remove a fledgling from its nest, both extremely dangerous tasks.

Female birds are the preference as they are larger and hunt with more aggression, a vital attribute when the winter survival of many families relies on their abilities.

The first successful expedition will take three to four years to prepare for. The eagle will learn to ‘chase’ a stuffed fox that has been tied to a length of rope or live rabbits and then fly immediately fly back to her master. When the eagle does well, she will be rewarded with a small portion of the kill.

Training is hard work, during the hunting season frequent forays into the wilderness are needed. The bird sits on the hunter’s leather-gloved hand and wears a hood to keep her calm. Once an animal has been spotted the hood is removed and the swift, deadly attack is over in moments. During the rest of the year, three hours of intense interaction is needed to keep the eagle tame. 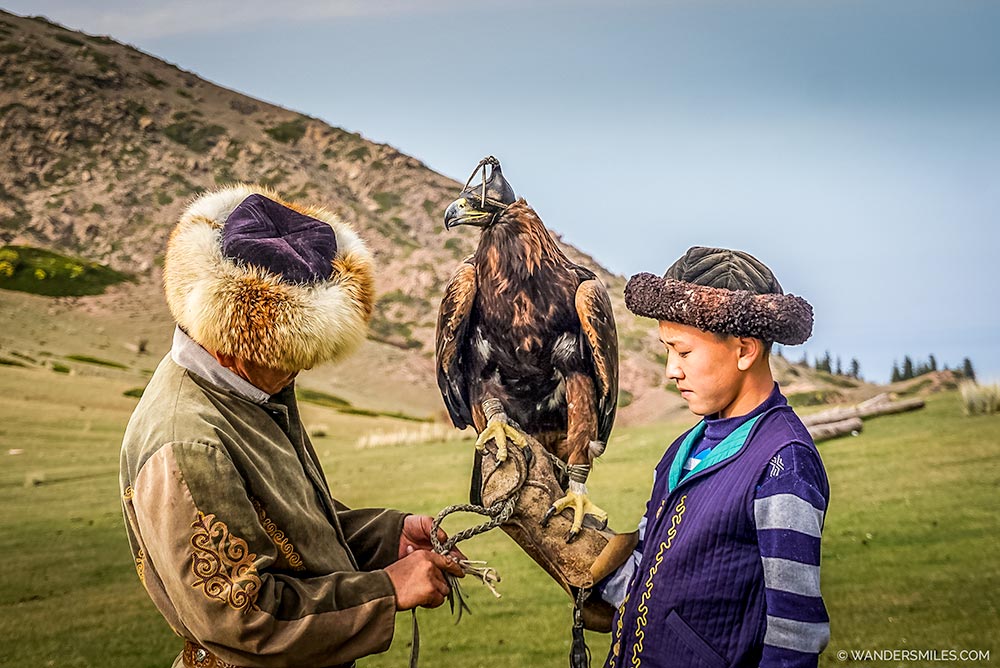 Relationship between eagle hunter and bird

The ethos of eagle Hunting in Kyrgyzstan is for the hunter to create and maintain a strong bond with their companion.

Eagles are usually fierce in their independence, so training from a very young age is important. A novice berkutchi and his eaglet will spend every hour together. The bird must learn to rely on his master. Tools include a permanent hood, the singing of songs, and being the only source of food.

The berkutchi we met on our trip told us that, when his bird is on his shoulder, he can feel that she has picked up a scent by the smallest movement of her talon.

After the ritualised twenty years an eagle will be honoured with a ceremonial release into freedom. 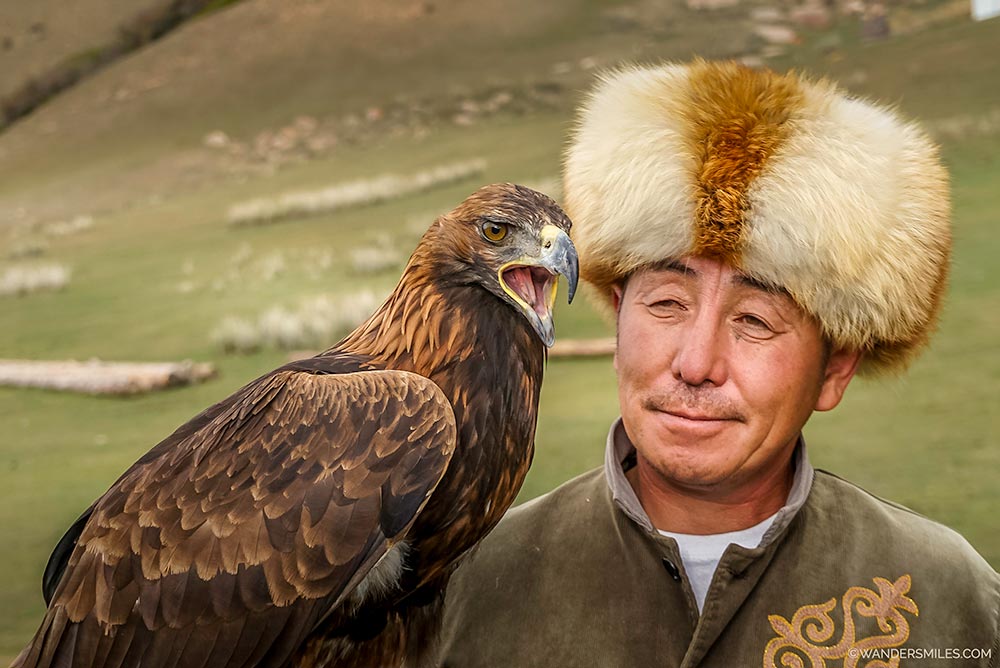 Now that eagle hunting in Kyrgyzstan isn’t the main source of food and clothing, it is tourism and community commitment which keep the custom alive.

Festivals, skill-sharing sessions, and private demonstrations are all great ways for tourists to see the awe-inspiring eagles and their masters at work.

Be aware that during the summer months of March to September, when the birds malt, the eagles will not be flying to kill so you’ll see the magnificence of the eagles but only see falcons and hawks hunting.

Issy-kul is a huge lake in Eastern Kyrgyzstan where many eagle hunting activities take place. It’s a busy location for hunters to learn and raise awareness of their craft.

The busiest festivals, such as the Eagle Hunting Festival in Bokonbayego village, can feel a little like a tourist trap and aren’t sustainable in their current form. However, it’s still a good place to taste the culture of the region.

If you can, visit in the winter when it’s possible to see the birds hunt and have good conversations with the local people. Contact the Salburun Federation, they are an inspirational organisation that works hard to support, promote and encourage diversity in eagle hunting circles. They connect local tour guides with hunters so that they can develop a more authentic experience for tourists.

For a truly absorbing trip, co-ordinate with the World Nomad Games in the town of Cholpon-Ata. It’s held every two years and is arguably the most unique sporting event in the world.

What to Expect from a Day with the Eagle Hunters

Our eagle hunting in Kyrgyzstan experience was epic. Our knowledgeable, cheerful guide packed a huge amount in and we were exhausted but happy by the end of the day.

Give horse-riding a go!

We met our horses in the village of Bokonbayevo on the southern shore of Issy-Kul Lake. They were patient and sweet and we enjoyed a leisurely ride through the jailoos (summer pastures) towards the Tien Shan mountain range. 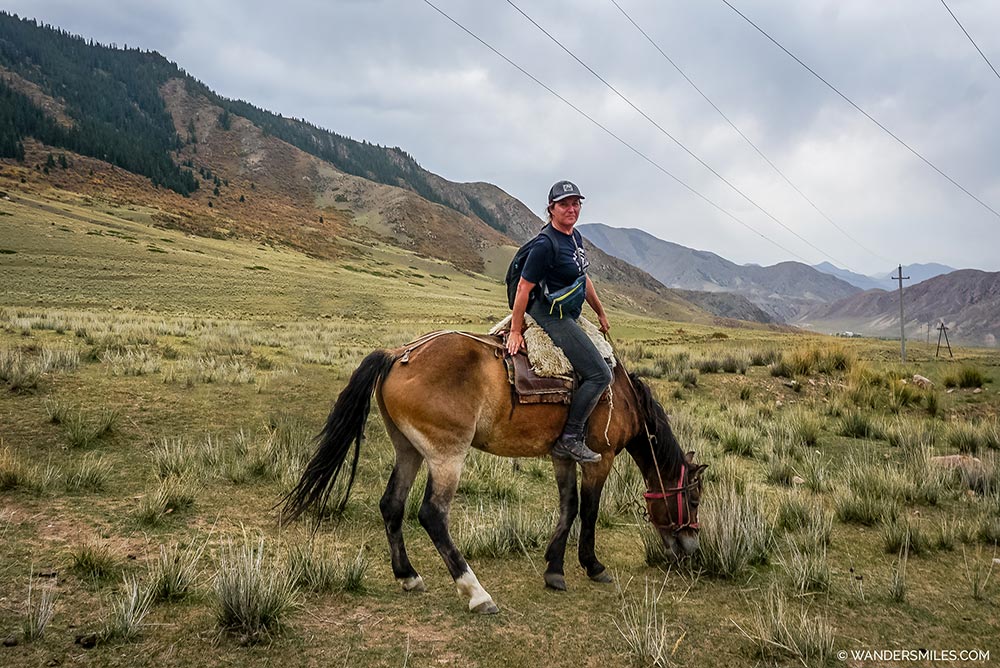 With the help of our guide to translate, the eagle hunter talked about the traditions that have passed down through the generations of his family. Our visit was not in the hunting season so there was no live prey used in the demonstration, but I was thankful for that.

The eagle hunter rode purposefully off into the distance with his eagle, a beautiful killing machine. We could hardly see him, but his son saw a signal and began dragging a fox fur behind his galloping horse. The ‘prey’ was soon spotted by the keen eye of the golden eagle and it was ‘killed’ in a spectacular scene of lightning-fast feathers and exploding fluff.

The Taigans were gorgeous! They are sighthounds and excellent hunting dogs but didn’t take part in the demo. It was interesting how hyper-alert they were as the eagle did her stuff though. Happily, once the hunt was over, they suddenly became keen to have their soft and fluffy ears stroked. 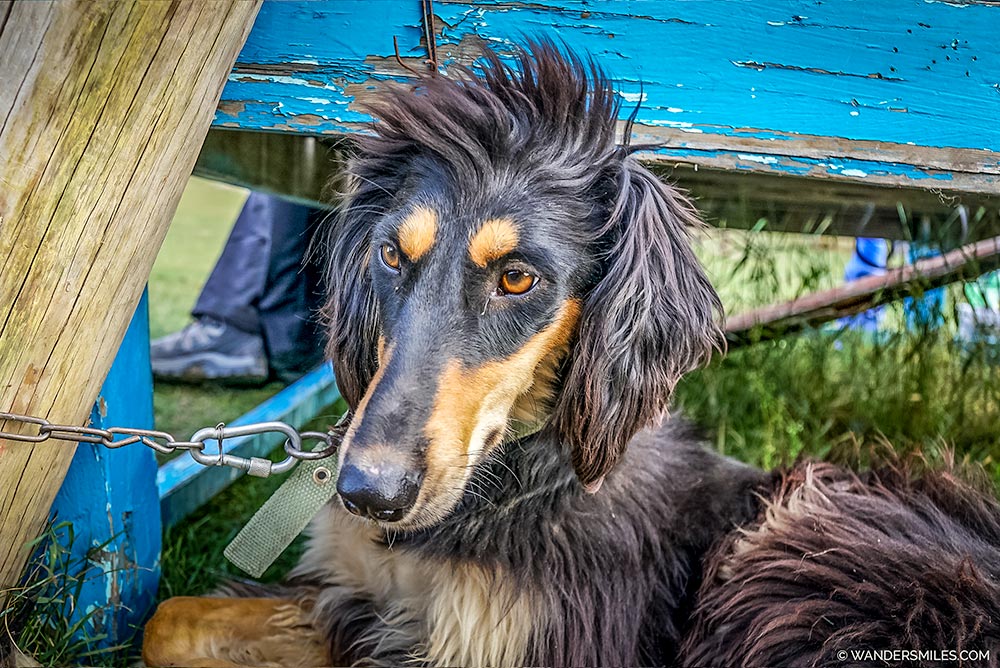 Both son and father demonstrated their jaw-dropping mounted archery skills by successfully hitting a bullseye from their thundering horses. We were given the opportunity to test out our own archery prowess but even on my own two feet, I had very little success.

We were encouraged to dress up in a traditional costume which was fun. The eagle was surprisingly heavy, and it was unnerving to have her stretch her awesome wings as she sat on my gloved arm. 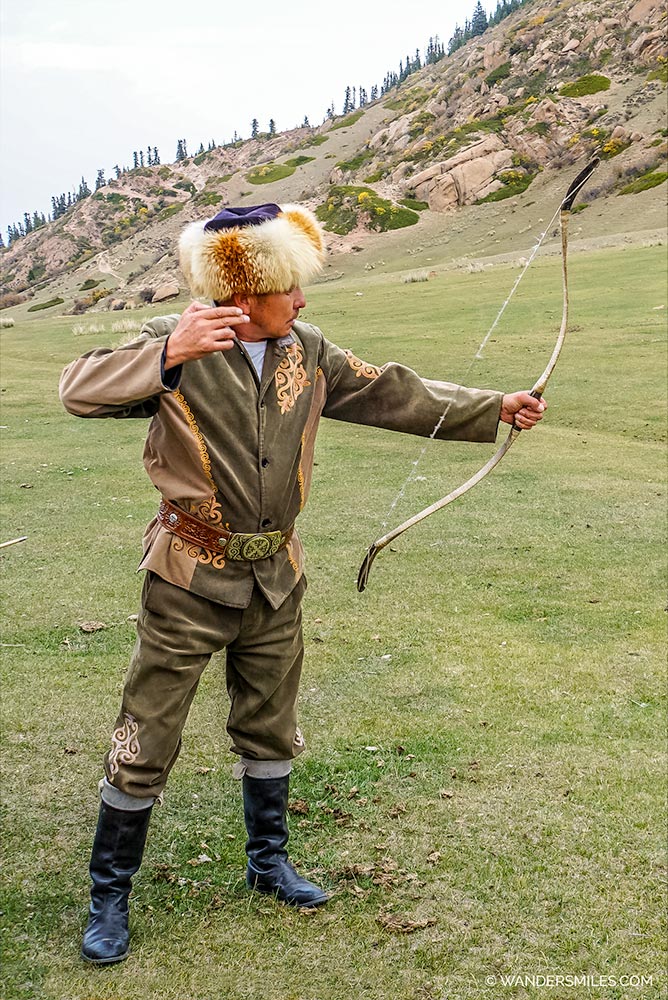 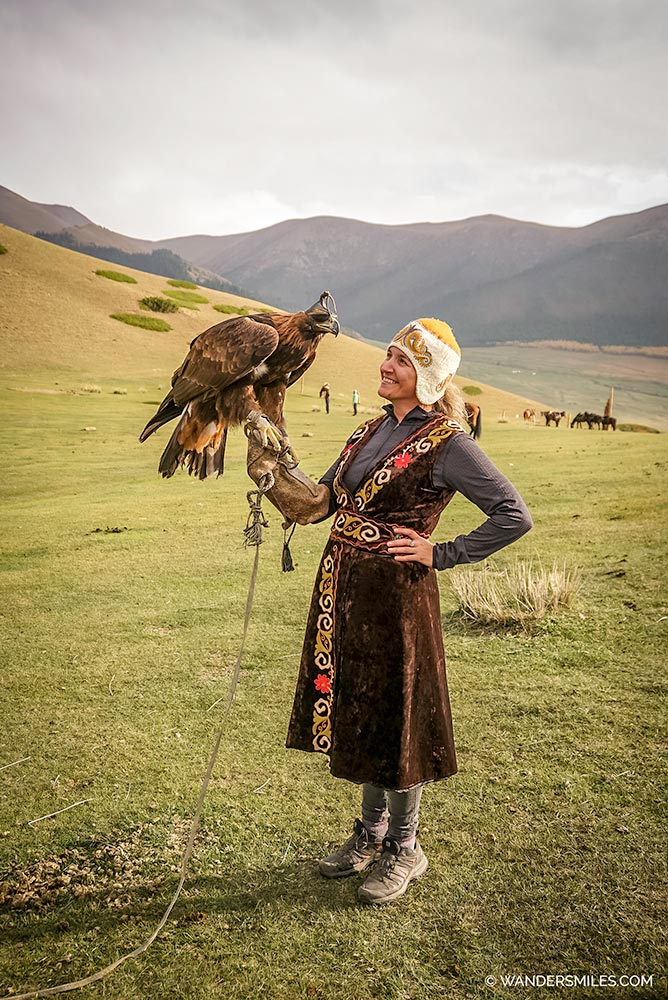 I had some ethical concerns about seeing eagle hunting in Kyrgyzstan but followed this guidance to lessen my impact as an outsider.

PLAN AHEAD FOR YOUR KYRGYZSTAN TRIP

My visit to Kyrgyzstan was with Trekkup. For more Kyrgyzstan trips, check out these options;

WOW these photos are stunning! I’ve never heard of eagle hunting in Kyrgyzstan before and would love to experience it! So beautiful!