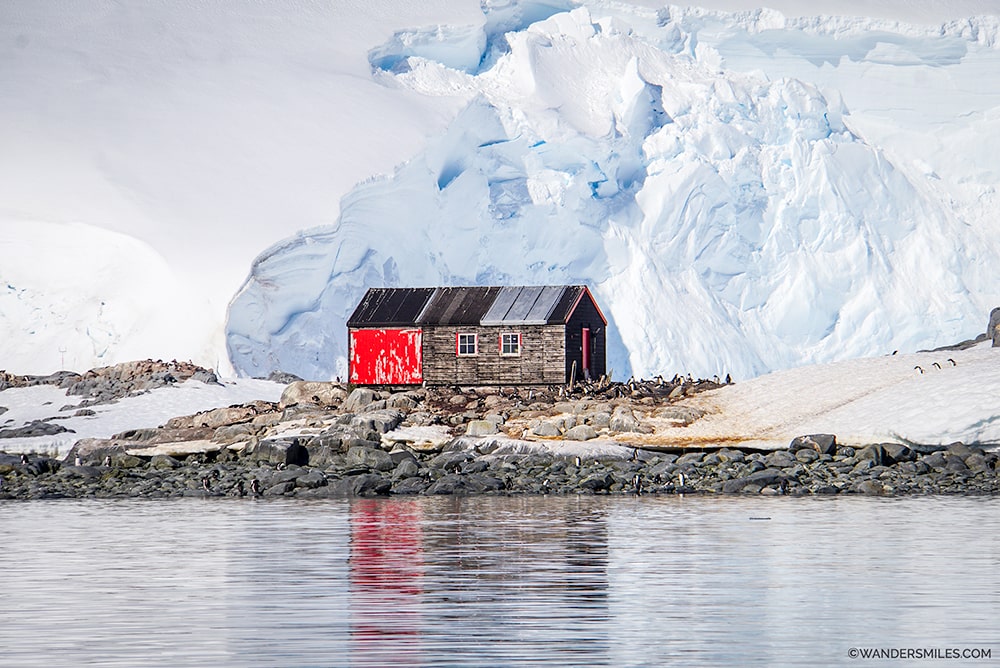 If you’re lucky enough to be a passenger on a ship heading for the Antarctic peninsula it’s easy to focus purely on the spectacular scenery that you’re about to enjoy. Port Lockroy will appear on the destination list of most tourist vessels and it is well worth the visit.

Nestled amongst the blue glacial ice and stunning mountains you will find a historic military and scientific base, a city of Gentoo penguins, and crystal-clear waters waiting to be explored. The UK Antarctic Heritage Trust has lovingly restored and looked after Port Lockroy since the 1960s and offers the warmest welcome on the white continent. 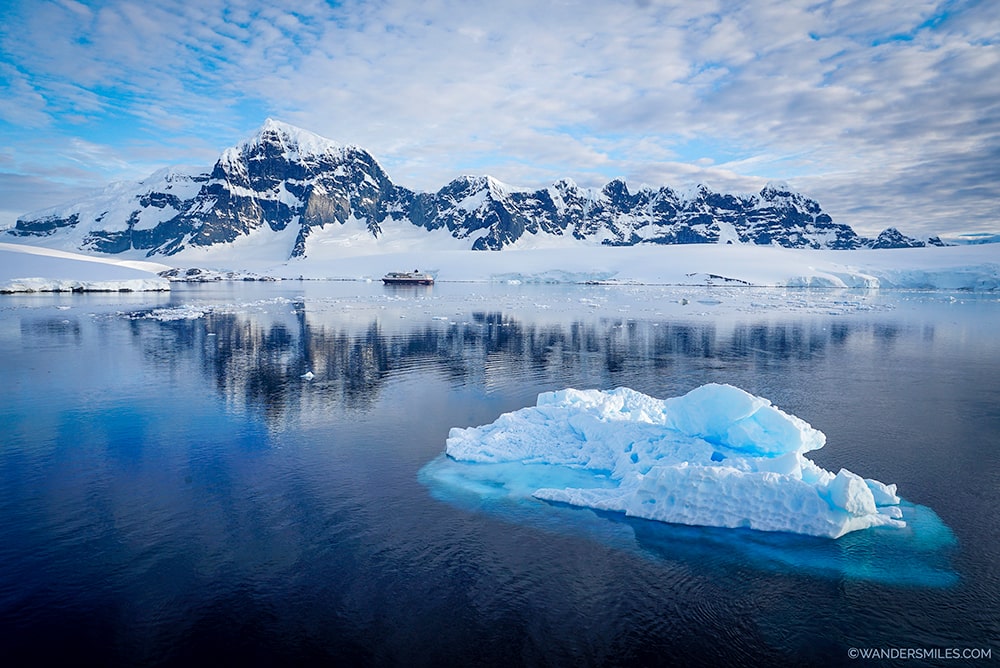 Where is Port Lockroy

Port Lockroy is a sheltered harbour on the tiny island of Goudier Island in the British Antarctic Territory. It’s a beautiful place studded with dramatic glaciers and was chosen for human occupation because of its strategic location at the meeting place of three sea routes. Its exact map reference is 64º49’S, 63º30’W. 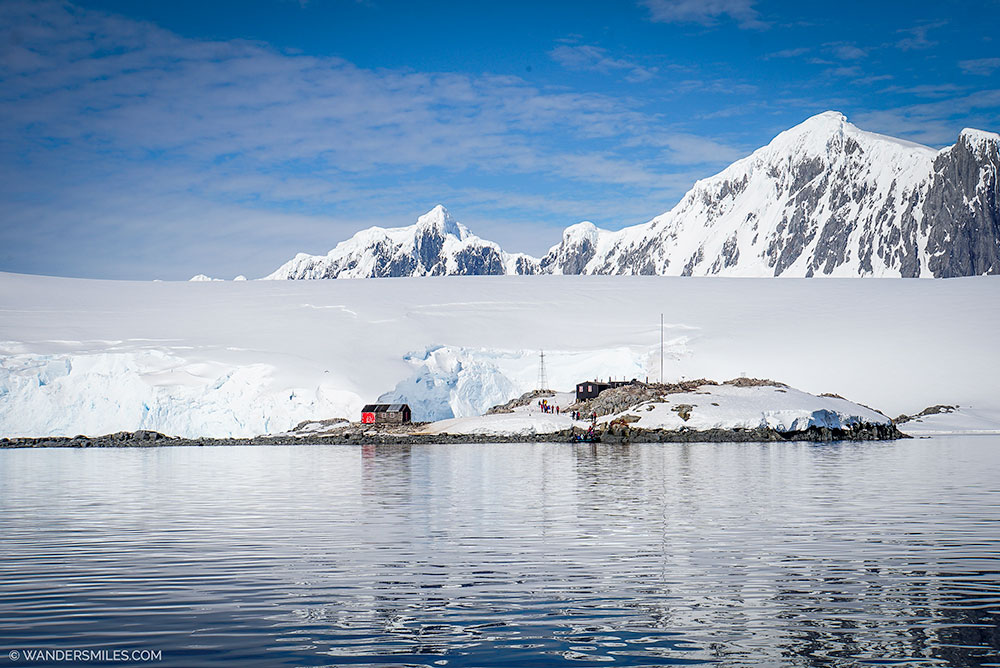 Port Lockroy was first discovered by the French. Explorer Jean-Baptiste Charcot’s expedition of 1903-1905 stumbled across this natural harbour and he named it after the politician who paid for his career of voyages.

Between 1911 and 1931 Port Lockroy was a centre of whaling. The factory ships docked there waiting for the whalers to come back from far out to sea. On modern-day trips to the island evidence of this industry is clear to see. Giant rusty mooring chains crumble on the shore and sun-bleached whale skeletons provide climbing frames for the local penguins.

Port Lockroy’s history took a twist in early 1944 when Base A was built and became part of a WW2 mission. The code name for this top-secret expedition was Operation Tabarin and it was launched to prevent enemy ships from gaining safe anchor in the Antarctic. It was a hastily organised reaction to the Nazi’s air-dropping propagandist leaflets into nearby Queen Maud Land.

Operation Tabarin also had a scientific element which later led to Port Lockroy becoming a meteorological research station from the end of the war till 1962. Data was collected by the Falkland Islands Dependencies Survey, the predecessor of the British Antarctic Survey. The presence of these organisations also strengthened the British position in the Antarctic at a time when it was being challenged.

Base A was closed and abandoned in 1962. It wasn’t until 1996, when the Antarctic Treaty was signed, that new habitation and subsequent renovation began. The treaty declared Port Lockroy a historic monument as it was the first British base in the Antarctic and the only surviving evidence of Operation Tabarin.

The UK Antarctic Heritage Trust now looks after Port Lockroy and other historic sites on the continent. They have a small team living there during the summer months who provide building maintenance, wildlife studies, and information to visitors. 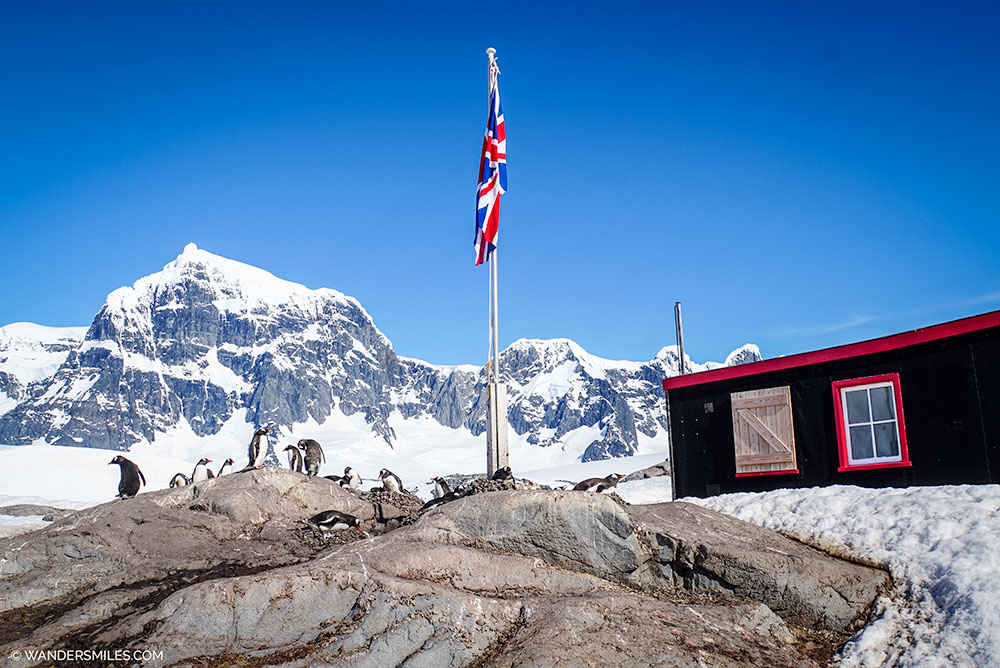 Bransfield House, the main building of Base A, is at the heart of man-made Port Lockroy. It is home to the most southerly operational post office in the world, sells quirky souvenirs in the gift shop, and is a living museum dedicated to the scientific era of the 1950s and ’60s.

The building was named after the 19th-century explorer and Antarctic pioneer, Andrew Bransfield. He was one of the first to make a confirmed sighting of Antarctica in 1820 which gave way to many more Antarctic explorations.

The building has been preserved just as it was in the 1950s and 1960s – it’s fascinating to investigate the artefacts in the museum. Original bedclothes, kitchen goods such as vintage cans, ancient communication equipment, and the old-fashioned scientific equipment all take you back into a different time.

Paintings can be seen of Doris Day and Jayne Mansfield bring a little piece of Hollywood to the site. They were painted by Evan Watson, a mechanic at Port Lockroy in 1960 which lay hidden beneath a top coat of paint and were only rediscovered when the bunkroom was restored in November 2011. Research proves that the paintings were first covered up between 1980 and 1983 but why, and by whom is unknown! 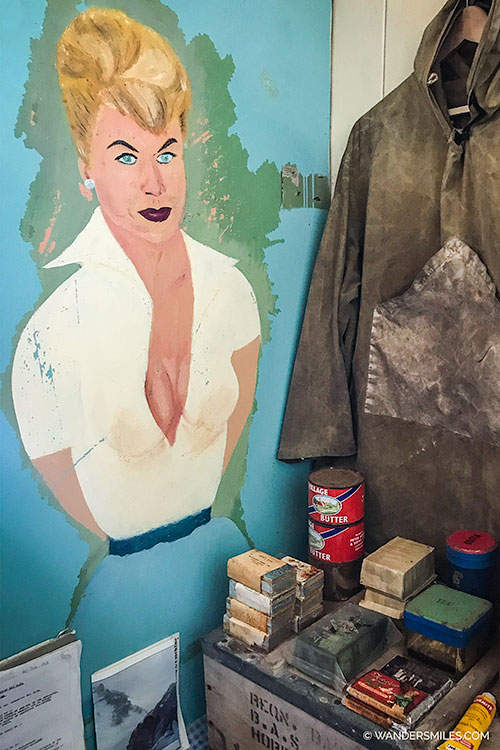 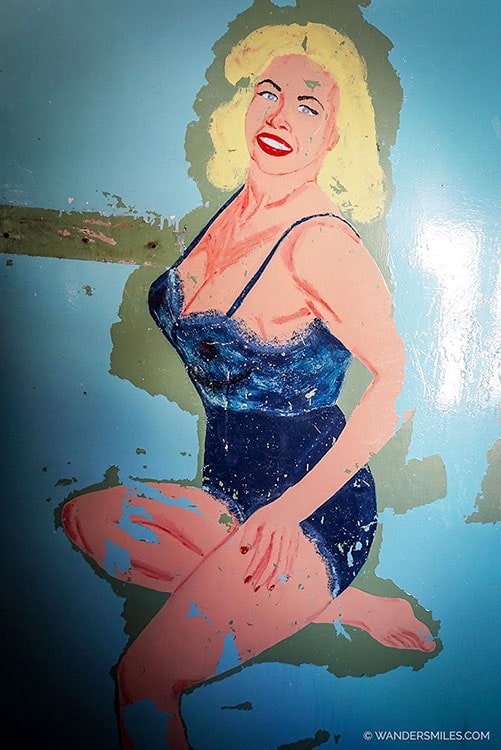 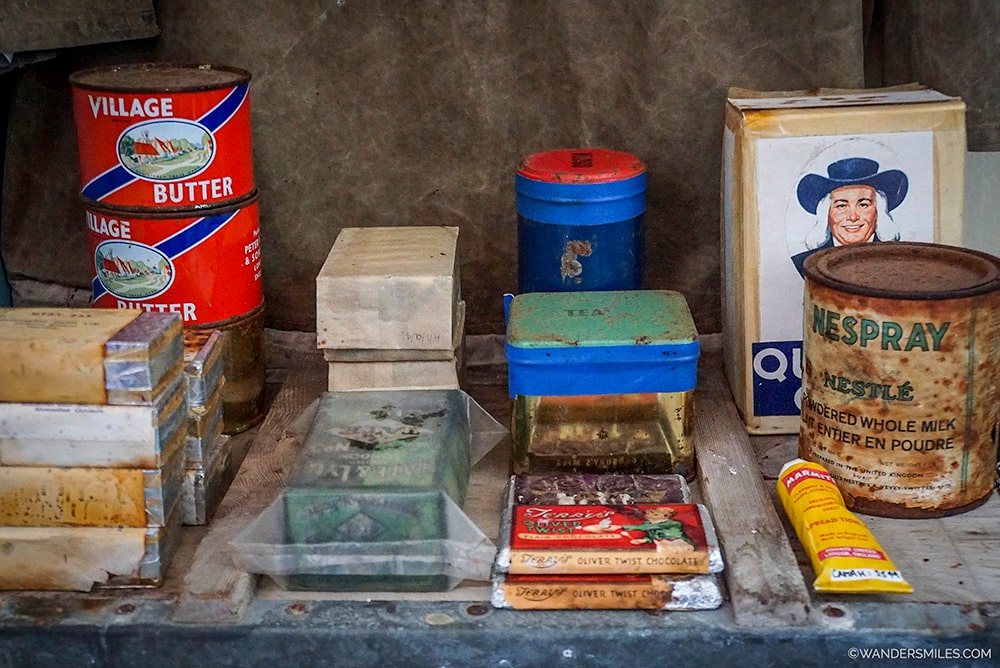 For lovers of technology, the radio and science rooms are an enthralling look at life as it was before satellites and digital innovations. Wireless telegraphy by Morse code was used for routine communication and was the only form of contact with the outside world in the depths of the inhospitable Antarctic winter. Sending a message was a complicated and often frustrating business. The men were limited to sending a 100-word message and receiving a mere 200 words per month!

The first mail was stamped aboard a ship in Port Lockroy with overprinted Falkland Island stamps until the post office in Bransfield House opened on 23 March 1944 until 1962 when the base closed. As part of the refurbishment, the Penguin Post Office opened again in 1996.

Sending a penguin-themed postcard from the stunning icy wilderness is a real thrill for adventurous travellers. Just for the novelty factor, you can receive an unofficial Antarctic stamp on your passport at the Post Office too!

During the five months of the Antarctic tourism season, around 18,000 visitors will send 70,000 pieces of the post. They are collected every two weeks and travel to their destinations via the Falkland Islands and England. I found this out the hard way as I misplaced my mobile phone at Port Lockroy. Thankfully, a kind crew member from our ship collected it on their next trip and posted it from the Falkland Islands.

The four staff of Port Lockroy (the four beds in the Post Office living area are the only ones on the island unless you count penguin nests!) also collect data on the impact the visitors have on the gentoo penguin population. So, if you fancy a 6-month shift on Port Lockroy, you can apply for the internship but beware there will be little wifi and showering but lots of penguin action!

Gift shopping is a must in the 1950’s pin-up girl-themed shop. One bold ‘Monroe’ portrait is legendary as the beautiful blonde was a victim of distraction. Her second arm and hands were unfinished by an artist in a hurry to catch the last pioneering flight home. 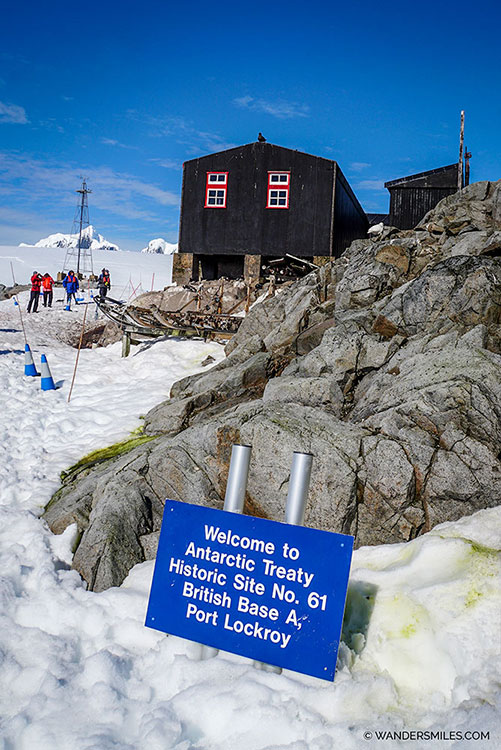 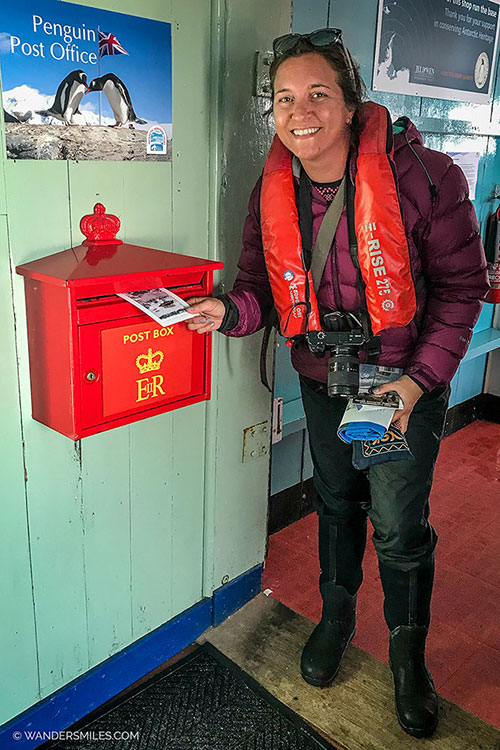 No other landmass is so pristine as Antarctica so spending a beautiful sunny afternoon gliding along in a kayak on the sea around Goudier Island is one of my favourite travel memories.

In a small group, we set off from a sheltered bay in the west of the island. It was a wonderful way to see the pristine landscape, gaze down at whale bones on the seabed, and appreciate the antics of the penguins from their perspective.

I’d been excited at the prospect of this adventure since we set sail and it was even more thrilling than I had imagined. Deep in the bay we discovered some stable sea ice and with the help of some energetic paddling managed to make a rare and exhilarating landing. Amazing!

READ: TIPS FOR SEA-KAYAKING IN ANTARCTICA

Port Lockroy shares the island with an entertaining community of gentoo penguins and half of the territory is exclusively reserved for the 1,500 birds.

The penguins are adorable, and curious and are a highlight of a visit. Happily, the beginning of the summer season coincides with gorgeous fluffy chicks being raised by proud parents.

Port Lockroy is a fantastic example of creatures and humans living in harmony. A vast amount of research is being done into the penguins and how they are affected by the people in their environment.

On the surface, it seems they don’t mind people at all as they often need to be discouraged from wandering into the Post Office. In fact, the presence of humans helps the penguin population as predatory birds such as Skuas avoid the human part of Port Lockroy.

Always be mindful, when visiting this remote part of the world, that you are a privileged guest in the home of these charismatic penguins. Respect the birds, their chicks, and the nests at all times. 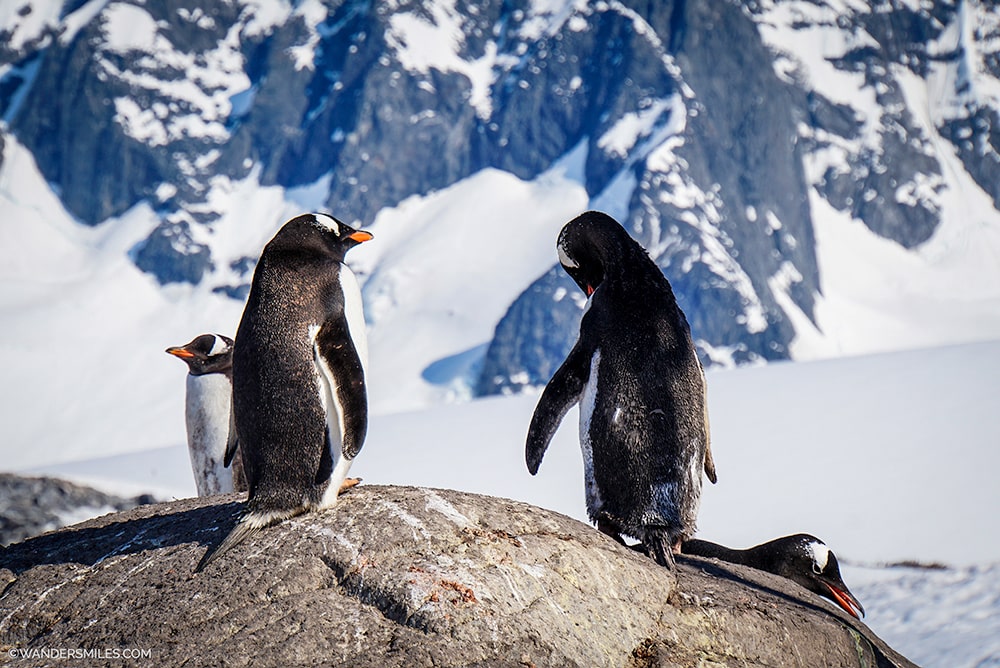 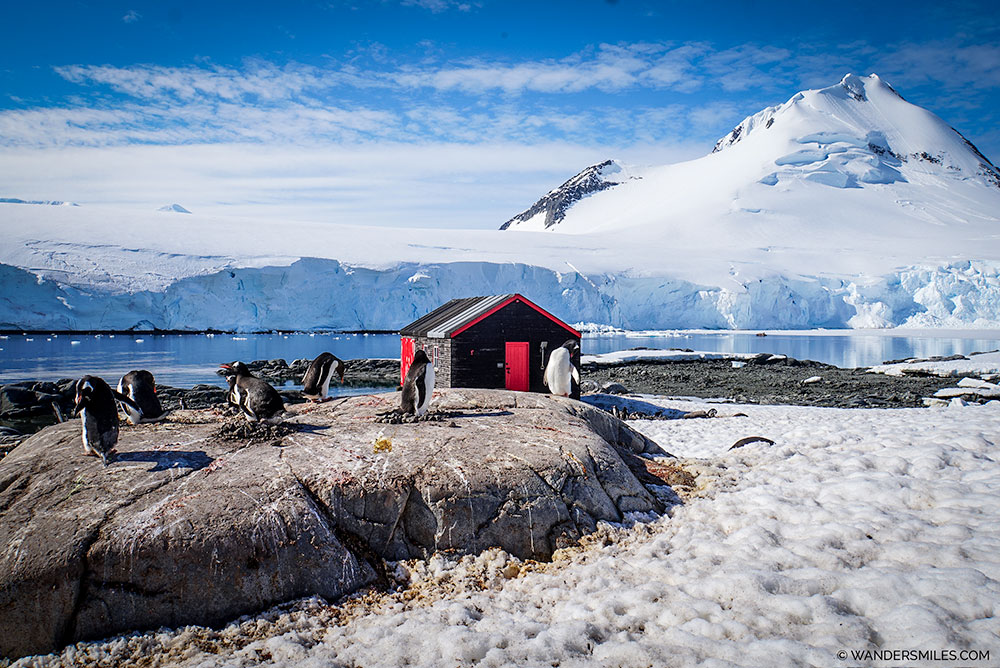 Views of Gentoos on Port Lockroy

PLAN AHEAD FOR YOUR ANTARCTICA TRIP

Antarctica is a trip that needs proper research! If the activities are what you want from your Antarctica trip, always check what is included in the package. Some expeditions will charge for additional activities. We opted for the Antarctica Basecamp expedition with Oceanwide Expeditions booked with World Expeditions.

Another recommended option for Antarctic tours would be G Adventures who offer amazing itineraries around Falklands, South Georgia & Antarctica.

Travel insurance for any adventure trip is an absolute must and Antarctica is no different. I went with World Nomads. You can buy and claim online even when you’ve left home.  I love that they give a little back too and support community development projects in various countries.

I am saving this post for my future travel planning. Wow! I hope very much that I get to go here one day. Amazing! Thanks for sharing and introducing us to this little known area.

Antarctica is a dream trip – I truly hope you get to visit the magical place and post a letter from Port Lockroy!