The ancient city of Istanbul is unlike any other. It has been the site of human settlement for 3000 years and was colonised in the 7th century BC by the Greeks. The city now proudly displays the treasures of the Egyptian, Muslim, Ottoman and European cultures which influenced the city over the years.

Istanbul is split into two halves and, uniquely, different continents by the glittering blue ribbon of the Bosphorus strait. Travellers who take the opportunity to sail these beautiful Bosphorus waters as we did, will see the wooded hills of Asia from one deck and the shores of Europe from the other. Let’s check out the top things to see in Istanbul!

DISCOVER THE BEST THINGS TO DO IN ISTANBUL

Istanbul has so much to see that it feels almost impossible to fit it into one day. Prepare for aching feet if you pack as much into one day as us. The wonderful sights seen are well worth a little toe ache but if you want to take in the city at a more leisurely pace there are hundreds of hotels to choose from. Any budget, style and ambiance can be found amongst Istanbul’s hotels. From sleek, modern and close to bars and restaurants in the entertainment district to quiet, family run and traditional in the Old Town.

See the detail inside Hagia Sophia

Hagia Sophia, also known as Church of the Holy Wisdom, is a cathedral that is arguably thought of as the most important of all Byzantine structures. Built by the same Emperor who commissioned the Basilica Cistern this cathedral is pastel peach, pink and blue and features domes, towers and arches. Inside, the domes, opulently decorated with carvings and exquisite mosaics, seem to float as the supports are cleverly disguised.

The story of The Hagia Sophia is long and complicated with various disasters, fires, re-builds and architectural alterations. It is a cathedral that serves a tangible testament to the changes, both peaceful and violent that Istanbul has been through. 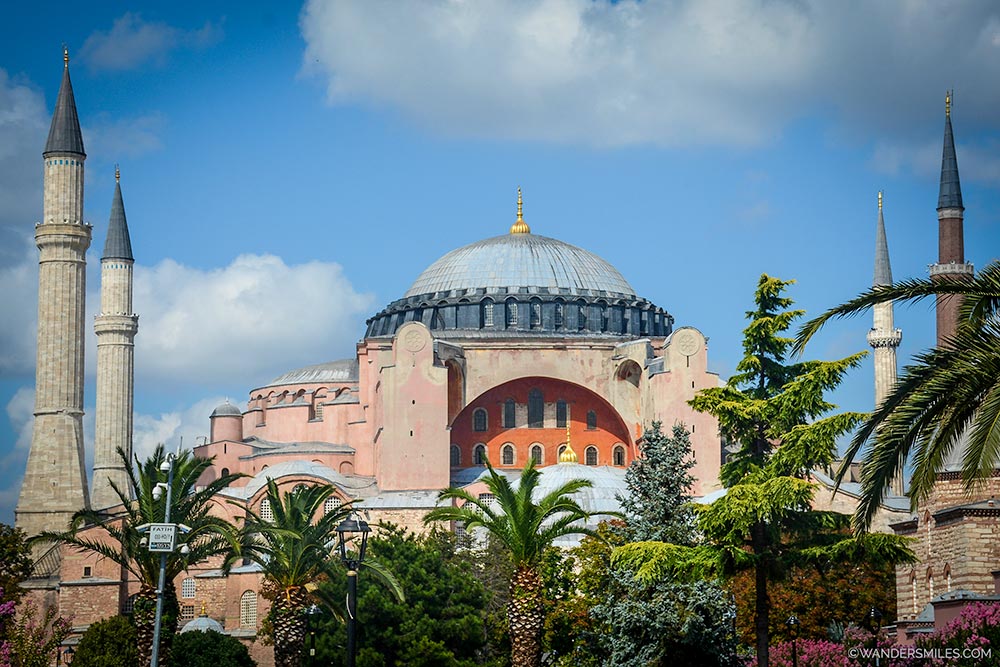 The Topkapi Palace is our next destination. Built between 1466 and 1478 by Sultan Mehmet II this gorgeous example of Ottoman architecture sits atop lush green hills overlooking the water with great views of each part of the city.

Topkapi translates locally as ‘The Gate of Cannons’ after the huge, imposing cannons at the entrance. The area is vast as Topkapi was the centre of Ottoman political reign for 400 years. Each new Sultan added a section to the palace according to his particular tastes or needs. A maze of buildings, each with a slightly different take on Middle Eastern style are connected by courtyards and gates. The curves, colours and intricate balconies and arches are stunning.

Topkapi translates locally as ‘The Gate of Cannons’ after the huge, imposing cannons at the entrance. The area is vast as Topkapi was the centre of Ottoman political reign for 400 years. Each new Sultan added a section to the palace according to his particular tastes or needs. A maze of buildings, each with a slightly different take on Middle Eastern style are connected by courtyards and gates. The curves, colours and intricate balconies and arches are stunning.

The most interesting part of the palace for me was the Harem. The colourful designs on the walls of the rooms are beautiful. Harem means forbidden in Arabic and it was here that the lives of the women of the palace played out. The wives, concubines and children of the Sultan lived in this 400 room complex guarded by eunuchs. As you wander round and touch the ancient walls it is easy to imagine the gossip, advice, love and spite that they have been witness to. 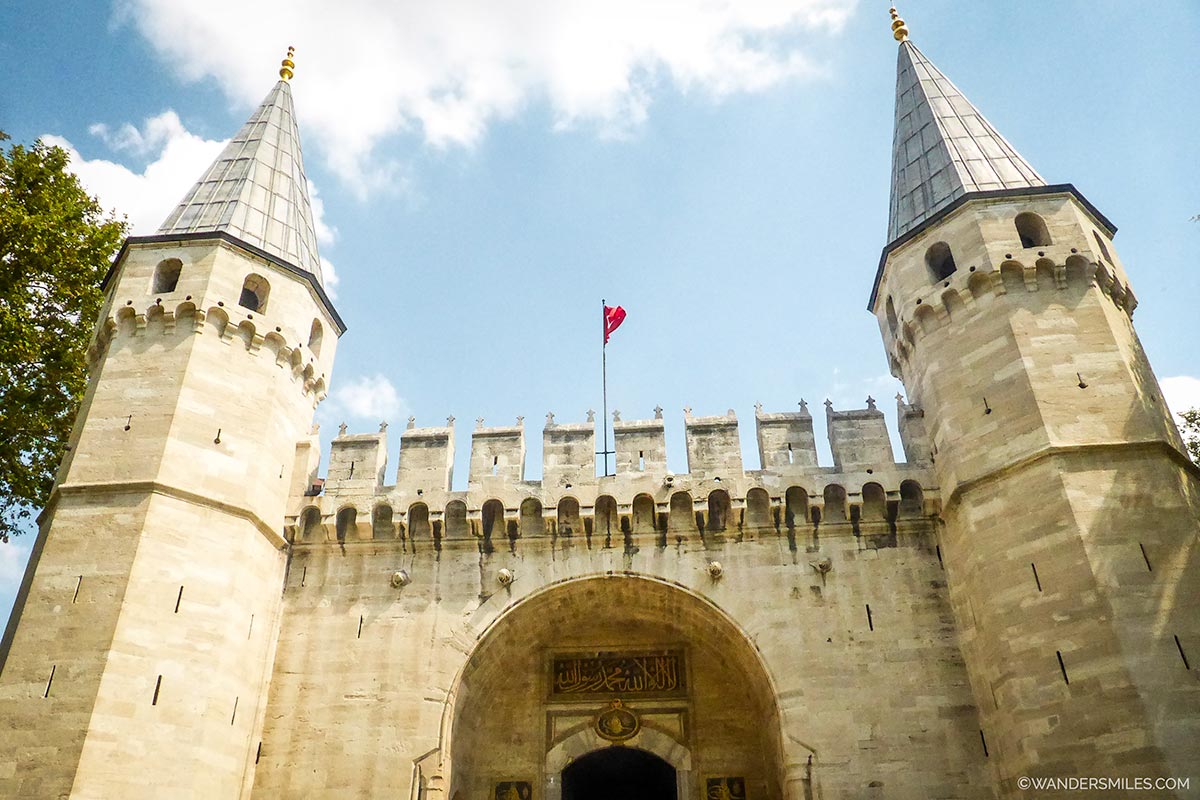 Mooch around the Grand Bazaar

The buzz of the Grand Bazaar is a shock after the tranquillity we have enjoyed so far. This sprawling covered market in the centre of the old town was effectively the first ‘shopping mall’ ever built. In Byzantine times this area was home to the local market, during Ottoman rule it expanded and became a commercial centre for the whole empire. Now it is home to over 4000 shops and stalls and we were glad of a guide…getting lost would be very easy.

The Grand Bazaar or Kapali Çarsi (covered market) the ultimate oriental style market, The hubbub is overwhelming at times and until you get used to it the calling out, haggling, energy and enthusiasm of the shopkeepers is a little intimidating. Once you become accustomed to the atmosphere and learn the rules of the banter and barter, it’s really good fun and is the perfect place to but gifts for yourself and just about everyone you know.

Make sure you look up and around while you shop. There is beauty and incredible design to appreciate and it would be a shame to be distracted by one more carpet, piece of jewellery of box of Turkish Delight. The local merchants on the outside of the main market are worth visiting. They are friendly, as long as you’re buying, and fascinating to talk to. They have sadly been priced out of the busier part of the market by higher rents and it’s important to ‘buy local’ wherever you can. 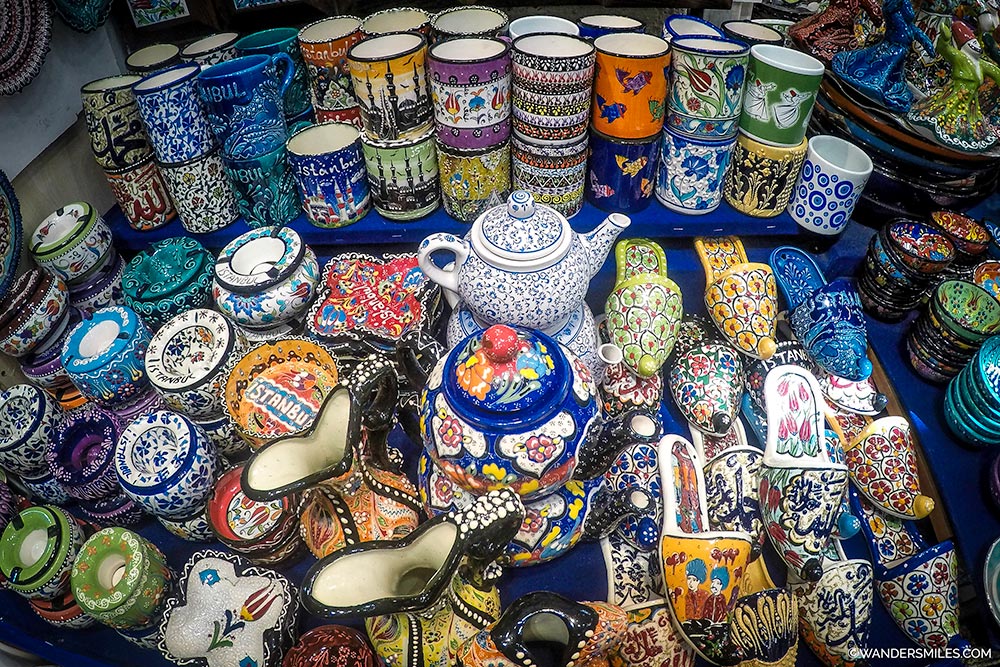 Explore the depths of Basilica Cistern

The Basilica Cistern in the area of Sultanahmet is a must see when visiting Istanbul. We descended under the city into a subterranean world of deep caverns and soaring Byzantine columns. The grandeur of the cistern is simply jaw dropping. The structure was built in 532 by Emperor Justinian to service the water supply needs of his Great Palace. The 336 columns were recycled from ruined temples which is why some of these engineering monoliths feature such fine carvings. The atmosphere down here is exhilarating as the cool water drips from above. On a hot day this would be the perfect place to retreat to. 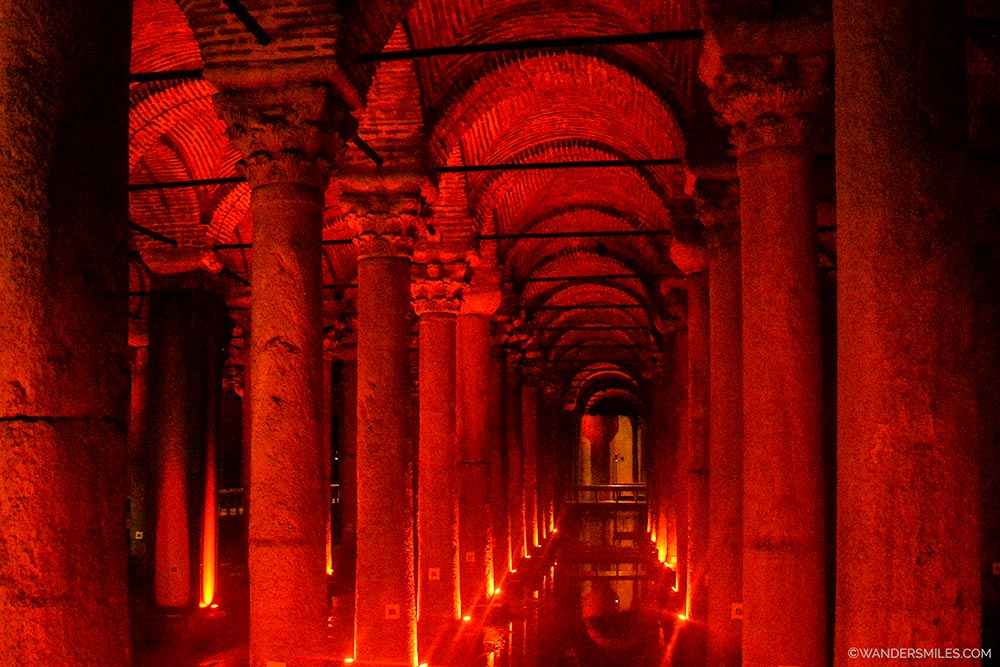 Hear the legend of Maiden’s Tower

A day packed with sight-seeing begins with the Maiden Tower, a building whose history is at the heart of fairy and folk tales. We sail up to the tiny islet it sits on at the southern entrance of the strait. Legend tells the story of a father building the tower to protect his much loved daughter from a prophecy that a snake would kill her on her 18th birthday. Sadly, the young woman’s life was cut short by a snake brought in from the mainland in a basket of fruit, destiny cannot be avoided it seems.

Historically Kiz Kulesi, ‘Maiden’s Tower in Turkish, has been used from the 5th century BC as a customs checkpoint, watchtower and lighthouse. Today the tower offers a wonderful panoramic view of the Bosphorus and the old town and a romantic, fine dining restaurant. A short ride on a little boat takes us the 200 meters back to the shore. 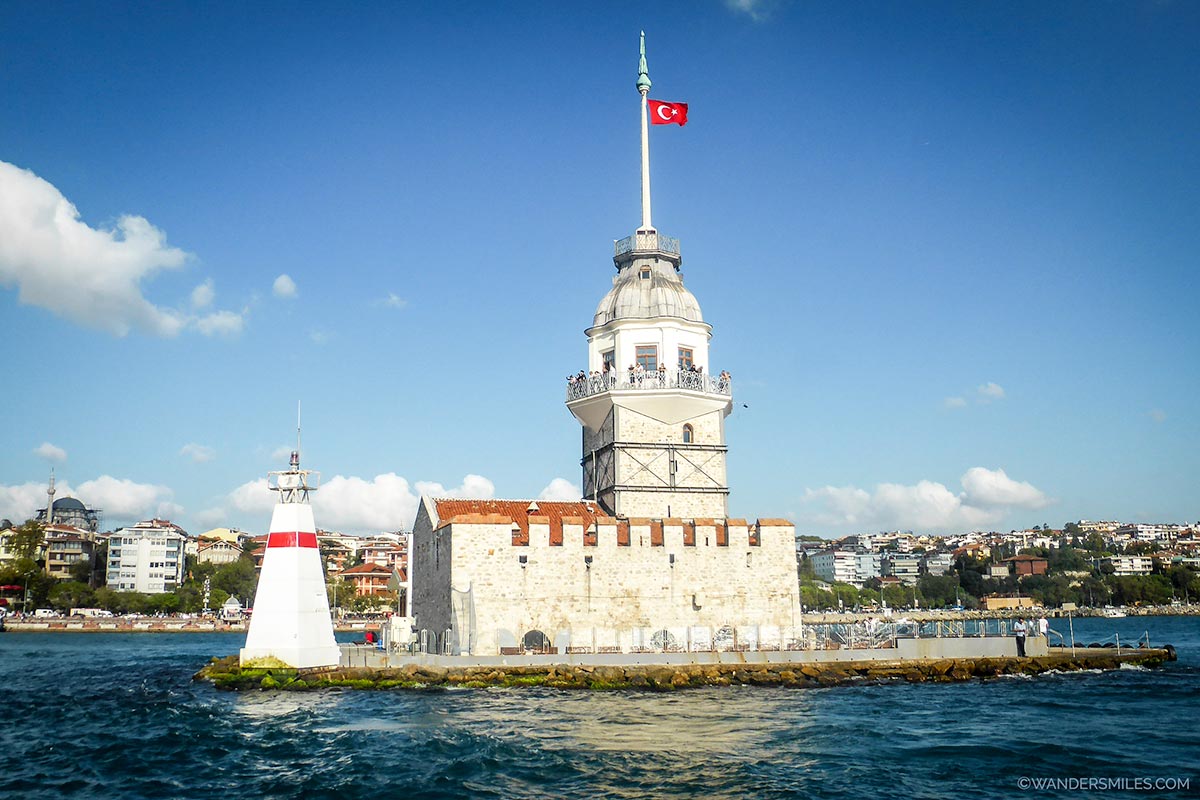 The last part of our tour of Istanbul brings us back out into the fresh open air and towards the water again. The Ortokoy neighbourhood of the city, on the European side, is dominated by a Muslim Mosque, a Christian Church and a Jewish synagogue. This sums up perfectly the balance of religion and culture within Istanbul.

Ortaköy is considered by locals and tourists alike to be the ‘nicest’ part of the city. Sitting in an airy, stylish bar drinking Turkish coffee with the Bosphorus strait and suspension bridge as a backdrop was definitely a lovely experience. There are numerous modern coffee bars on the squares and tiny old tea houses in the alleys and there’s the odd fancy, booming nightclub sharing air space with the call to prayer from the mosque. Ortaköy is the perfect place to end our day as the old, new and very different happily co-exist and it is this which makes Istanbul such a special place.

Go sailing of the Bosphorus Strait

A trip to Istanbul is not complete without sailing on the Bosphorus strait. and exploring the Princes’ Islands comprising of Büyükada, Heybeliada, Burgazada, and Kınalıada where you will find quaint life without cars, only horse and carts. You will find some awesome eateries on the islands that will leave you wanting to stay for your next meal of fresh fish and tasty meatballs whilst overlooking the harbour. 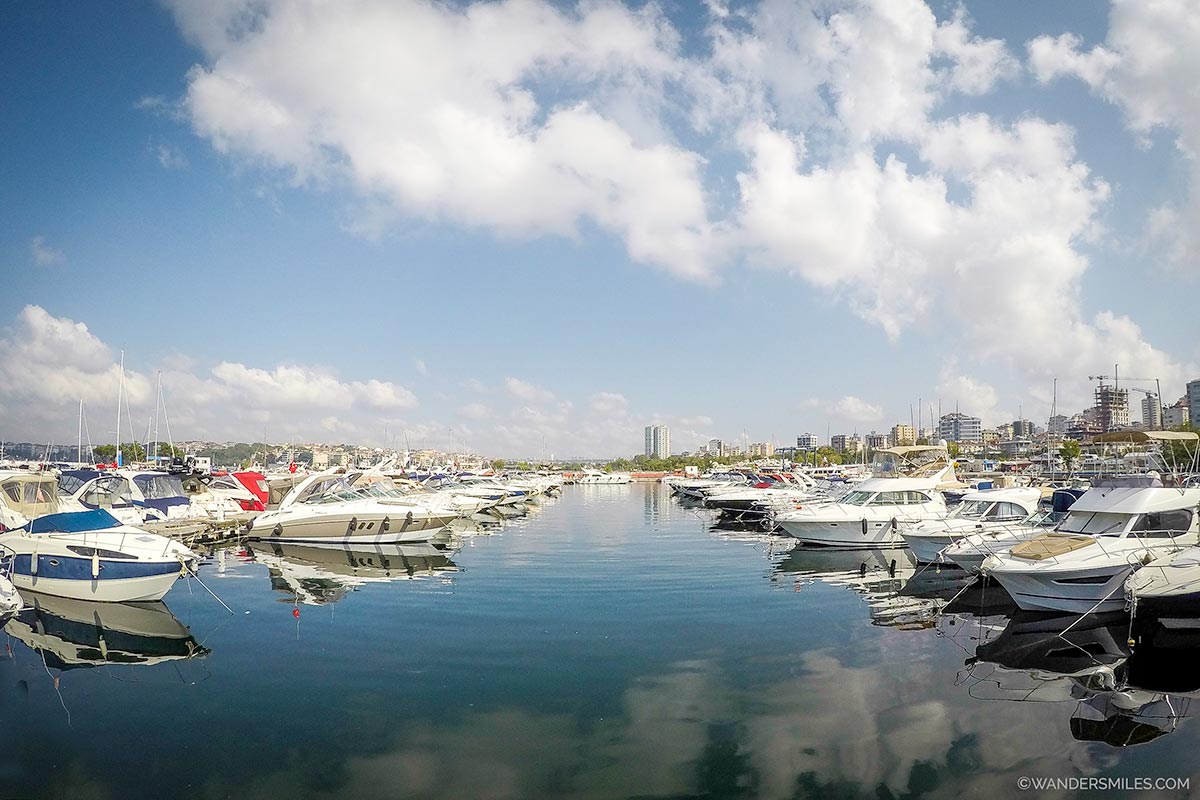 Get the Istanbul Tourist Pass

Istanbul is dense with places of interest and to experience them all would take up a large chunk of the average traveller’s budget. The most cost-effective way to ensure you see the best of the city is to invest in an Istanbul Tourist Pass.  Access all the most important attractions for one low price, book in advance and just walk past the queues. Depending on the pass you choose there is also the option to get a free transfer from the airport and a w-fi device so you can research the places you visit while wandering round them and for free.

If you’d like to be guided round the city of Istanbul, there are an array of tours to help you with this. You also can find many unique private tours to visit the top things to see in Istanbul.

Getting to Istanbul from Ataturk airport

There are now two airports in Istanbul (Istanbul airport and Sabiha Gokcen) as Atatürk Airport closed it’s doors in 2019 to make way for the shiny new Istanbul Airport. It can be confusing trying to navigate your way to the city, check out this handy guide on how to transfer from Istanbul airports by taxi, metro and bus.

Where to stay in Istanbul

There are so many beautiful budget and luxury places to stay in Istanbul to suit suit any budget and style. Little Big Traveler raves about Hotel Bankerhan, a neat and contemporary boutique hotel in Karaköy

PLAN AHEAD TO VISIT ISTANBUL 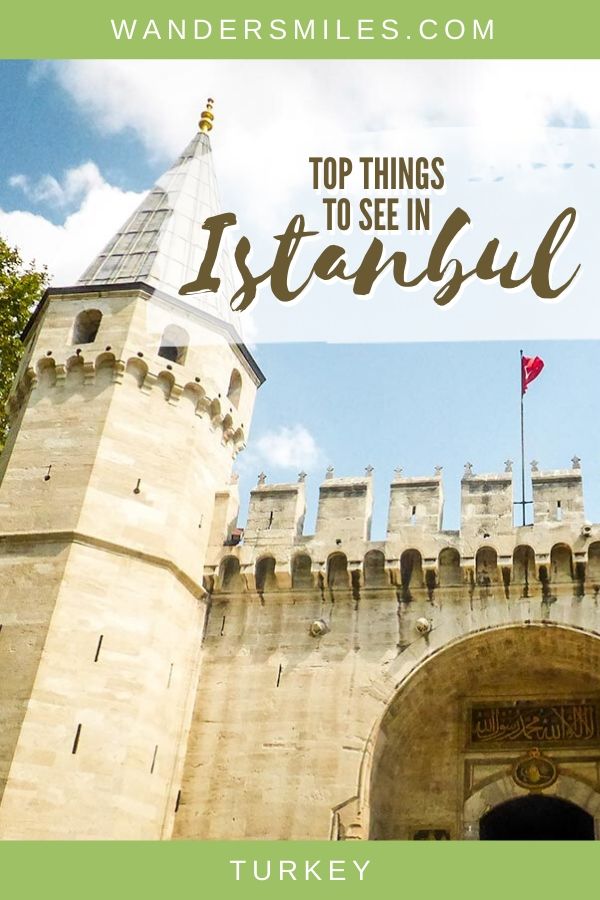 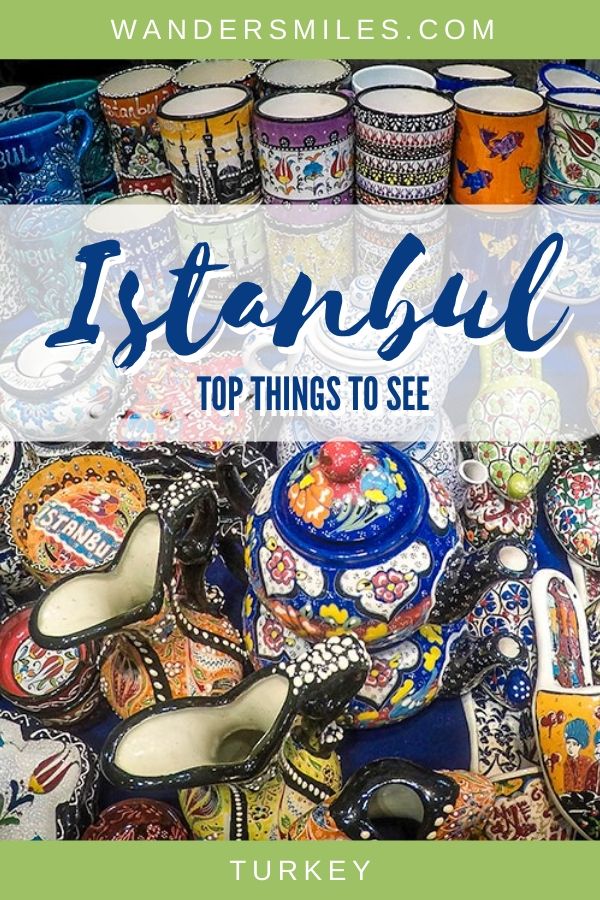 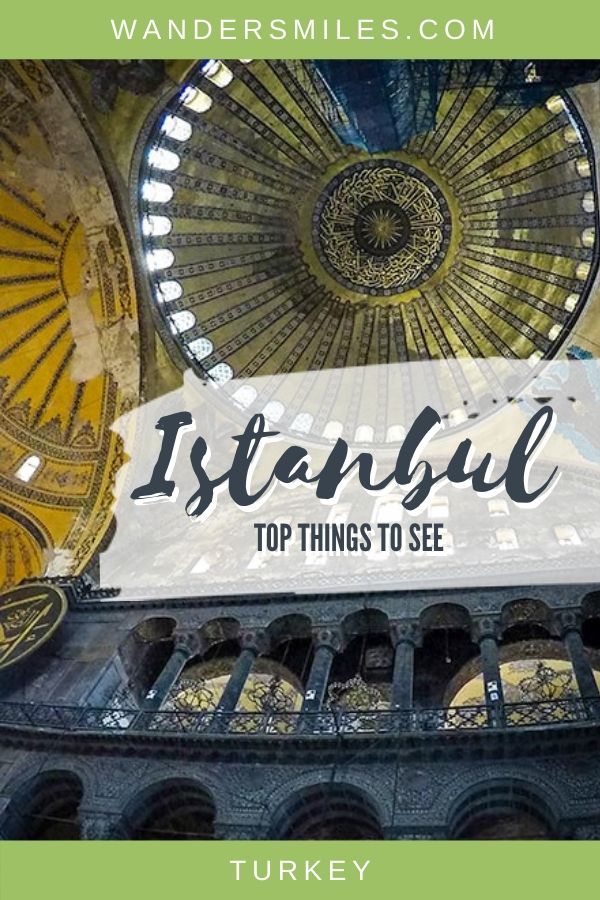 9 Amazing Things To Do In Hatta | UAE Adventures

Why visit Kraków in December | Poland

How to spend a day sailing on the...

Istanbul is one of my favorite cities. I stayed with a friend in Ortokoy and it was fantastic to be able to take a leisurely stroll down to a cafe on the Bosphorus in the mornings for breakfast.

Awesome hiking day! Wish I was there @RoarLoudTravel 💚 #adventuretravel https://t.co/gs0gDx8z5d

Reply Retweet Favorite
Have you seen the hot deals to stay with @YHAOfficial in England & Wales including 20% off cabins, Landpods, tipis… https://t.co/LJT2r65DlD

Awesome hiking day! Wish I was there @RoarLoudTravel 💚 #adventuretravel https://t.co/gs0gDx8z5d

Reply Retweet Favorite
Have you seen the hot deals to stay with @YHAOfficial in England & Wales including 20% off cabins, Landpods, tipis… https://t.co/LJT2r65DlD