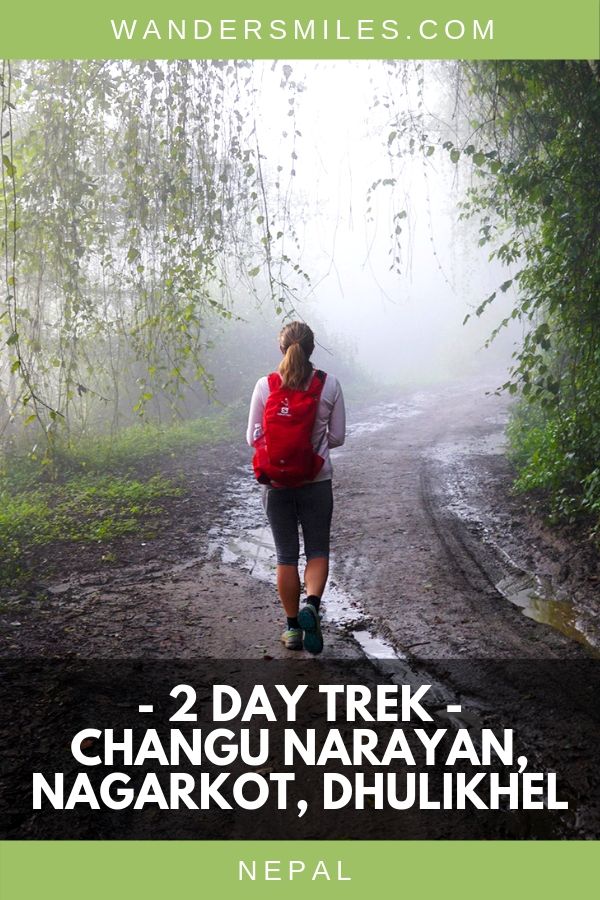 If you fancy an easy trek and whilst visiting Kathmandu, Central Nepal, and like me, you’re on a tight schedule, then a two-day Nagarkot trek from Changu Narayan to Dhulikhel, on the rim of the Kathmandu Valley is a perfect choice.

The ancient, pagoda-style Changunarayan Temple, dedicated to Vishnu and a Hindu pilgrimage site, is a real gem. It is the smallest and least visited of the UNESCO World Heritage Sites, mainly due to its location. It is at the top of a hill about a 50-minute drive from Kathmandu itself, in the Newari village where they still do wood and stone carvings as they have done over the centuries.

Changu Narayan contains the oldest Hindu Temple in the Kathmandu Valley. Dedicated to the god Vishnu, Changu Narayan was created by the Lichhavi kings of old as one of the four protection points of the Valley. The streets are flagstone and stepped with deep taps where women still come to get water as well as do their laundry.

The Nagarkot to Dhulikhel Trek follows upward along the Valley ridge past Brahmin and Tamang villages along with terraced farms. We can see both the Himalayas as well as the Valley below us.

You stumble upon the Buddha Peace Park which is instantly recognisable by the huge gold majestic Buddha facing out to the adjacent views of Kathmandu Valley. You can also, plant a tree in a Buddha Peace Park in the memory of your loved one, on your anniversary, your birthday, or your special day at (Rs. 350 for each one) including the transport if you are not available to plant the tree. Once planted, it will be the responsibility of the Peace Park management to water and nurture it.

We landed in Nagarkot village to enjoy traditional Nepalese cuisine in a local diner called AC’s Fast Food Cafe. After refuelling, we continued towards Hotel Mystic Mountain passing by the army no-go areas, you could see the troops training on the grounds. Nagarkot village is known for its views of the Himalayas, including Mount Everest to the northeast, which is especially striking at sunrise and sunset, unfortunately, as I trekked in monsoon June there was too much cloud to get a postcard-perfect sunset.

DAY 2 – TREK FROM NAGARKOT to DHULIKHEL

Setting off at 5.30 am, the sun was rising behind the clouds that covered the mountains as far as the eye could see. Although this isn’t the standard vivid sunrise, it was nonetheless breathtaking. All you could hear were birds singing and the monkeys screeching as they played in the lush green forest, it was super peaceful. Many butterflies fluttered around in the morning mist, this is what I call a perfect start to the day. 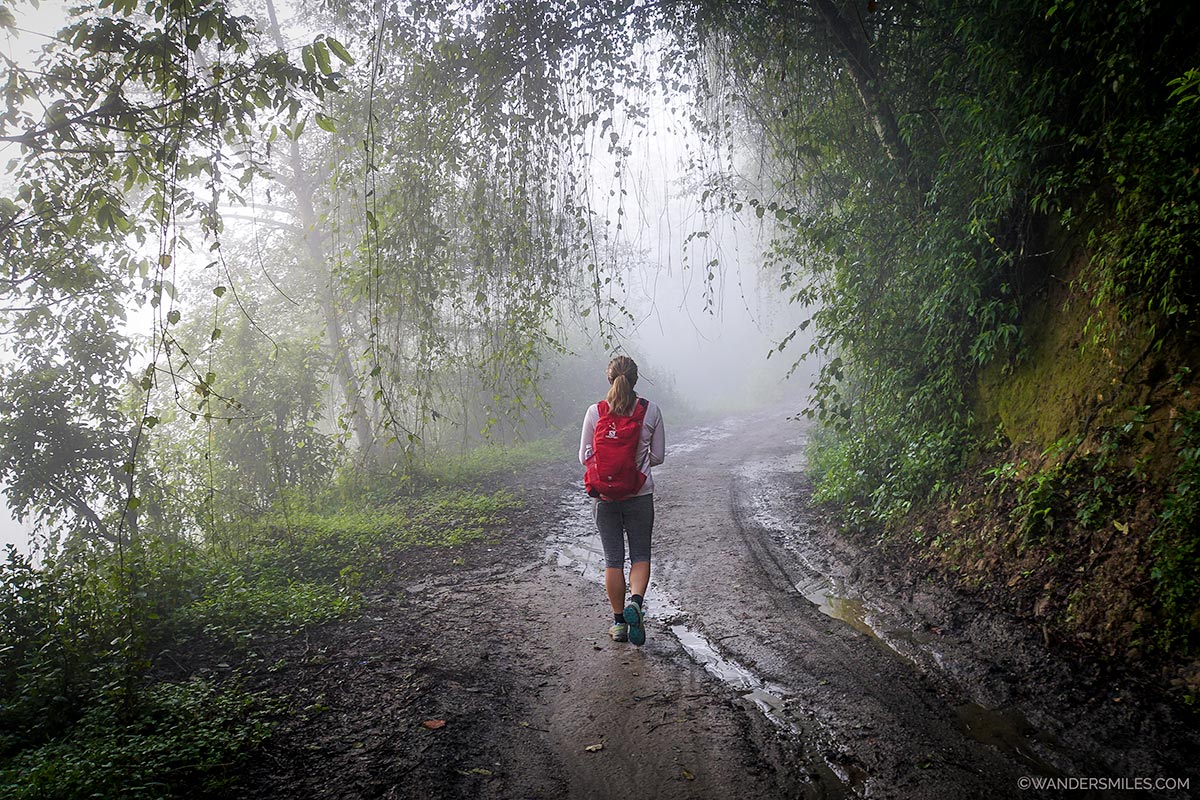 On a clear day, you can see the ranges of Gosainkunda, Ganesh Himal, Mt. Manaslu, and the Annapurna Mountains. It’s possible to see Mt. Everest (the world’s tallest peak) in the east to Mt. Dhaulagiri (the 7th highest peak in the world) in the west on a clear day. 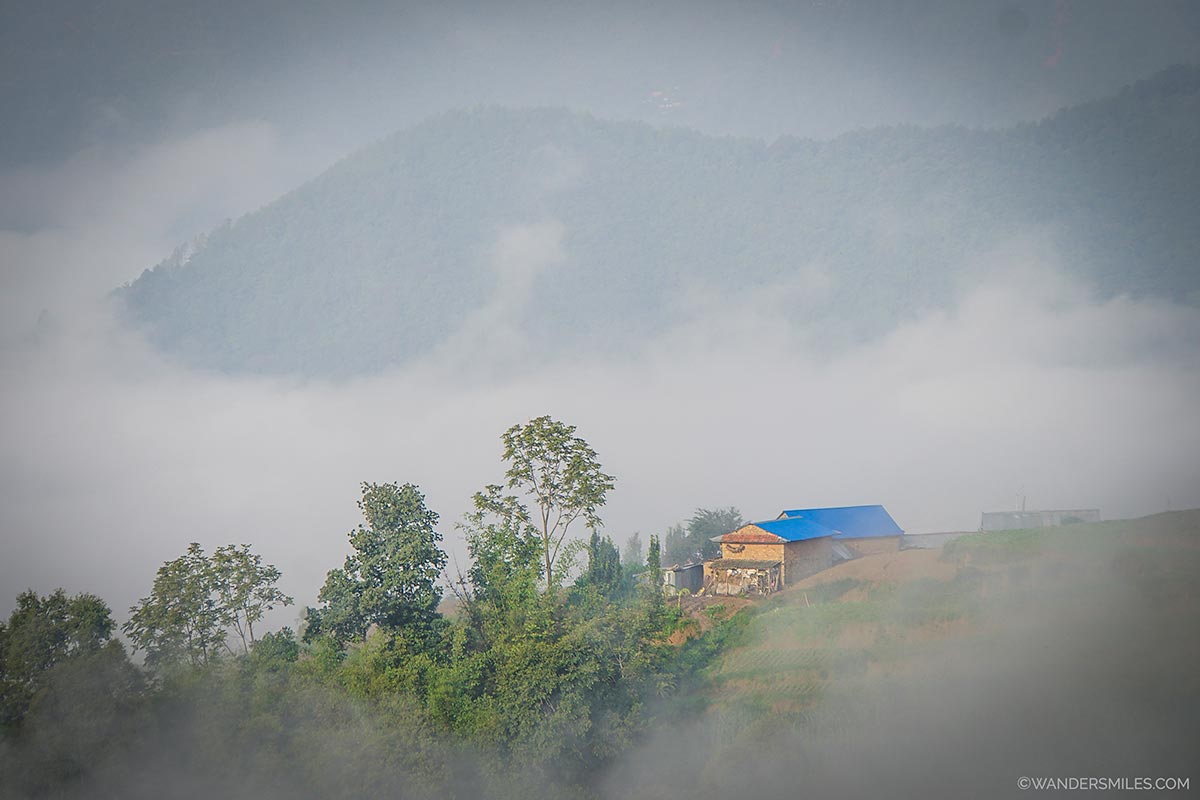 After the sun rose, the mist cleared and was glad to have made the early start to avoid trekking in the sun. We made it up and over a few mountains, one part was down steps then the final ascent up the terraced mountain brought us to Tonchok Mountain View Resort where we stopped to eat our packed breakfast.

We were served coffee by the Tamang lady in between her washing her sons’ hair and doing the laundry in the bucket outside. The father arrived with crops in his hand which he then cleaned and chopped. The father brought out the baby who’d awoken from his sleep, what a happy bundle of joy. It’s certainly a simple life eating off the land and earning small amounts from passing tourists.

We continued down through more villages, we saw women were carrying food on a huge basket on their back for the livestock, families all taking part in building new homes including a very old woman, she could’ve been around 85 years old but she was still shovelling gravel very slowly with a hand trowel, everyone pitches in it seems.

There was a family by a hut, a mother, father, and 3 children, the father was clearly drunk and hurling abuse at his wife who had her head down in front of him. I’m told this can be commonplace as the women can never leave their husbands in their culture so they have to put up and shut up which saddened me.

We passed two young sisters holding hands around 5 and 7 years old on their way to school, as it was only early our guide asked how long they still has to walk to get there… only 1 hour more!

The final stretch was tarmac road as we headed into Dhulikiel, a town of Newari heritage at an altitude of 1550m. Dhulikhel was once known by the Buddhist name of Shrikhandapur and still has a few Buddhist stupas in memory of the old days. You’ll also find several ancient temples dedicated to Sweta Bhairava, Hari Siddhi, Shiva, Narayana, and Gaukhureswor temple, which represent the medieval Nepalese culture, heritage, and a tradition maintained to this day.

In Kathmandu, you’ll find Thamel is awash with tour companies so it’s hard to know who to go with. You’ll even find men chatting to you as you walk the streets and then announce they have a trekking company so best to do your research to make sure you get a good company. I went with Himalayan Planet which I’d found on Instagram before I arrived, my stay was short so my dates were specific and for that reason was happy to pay for a solo trip. The communication was great throughout as they tailored the trip to suit me. You’ll find Himalayan Planet in the alleyway opposite Kathmandu Guest House. High five to Pankaj, my guide, he was awesome!

Time of year to go to Nagarkot

Monsoon in Nepal is from June to August when the climate is hot and a little humid, you can expect rain or thunderstorms too. I went in June and the days were perfect, a few spots of rain but mainly sunshine. Nargakot is renowned for the sunrise and sunset views of the Himalayas so September to May is really the best time to go to be lucky enough to see these.

Where to stay in Nagarkot

Considering the size of the village, you’ll be surprised at how many hotels you’ll find in Nagarkot, a bed to suit every budget!

Hotel Mystic Mountain where I stayed is on the more luxurious side, highly recommended. This 4-star accommodation has an outdoor pool, jacuzzi, and barbecue looking out onto the Himalayas. There is a bar and a restaurant where you can enjoy a buffet or A La Carte dining.

Hotel Himalayan Villa is a 3-star hotel spread over 2 acres of land. The restaurant serves Indian and International delights.

For your backpacking trip in Nepal, always make sure your travel insurance is sorted! World Nomads is my go-to guys, I’ve learnt this from experience. You can buy and claim online even when you’ve left home.  I love that they give a little back too and support community development projects in various countries. 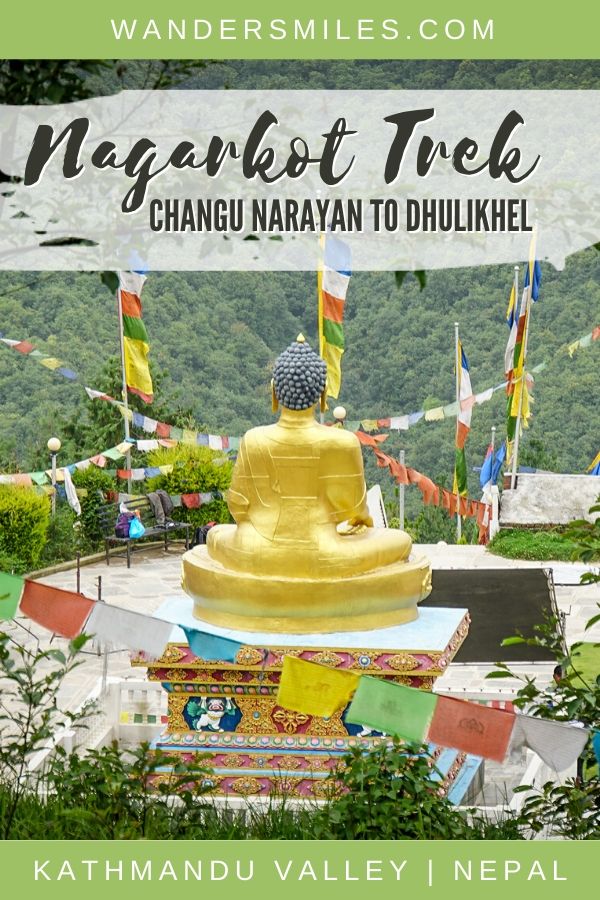 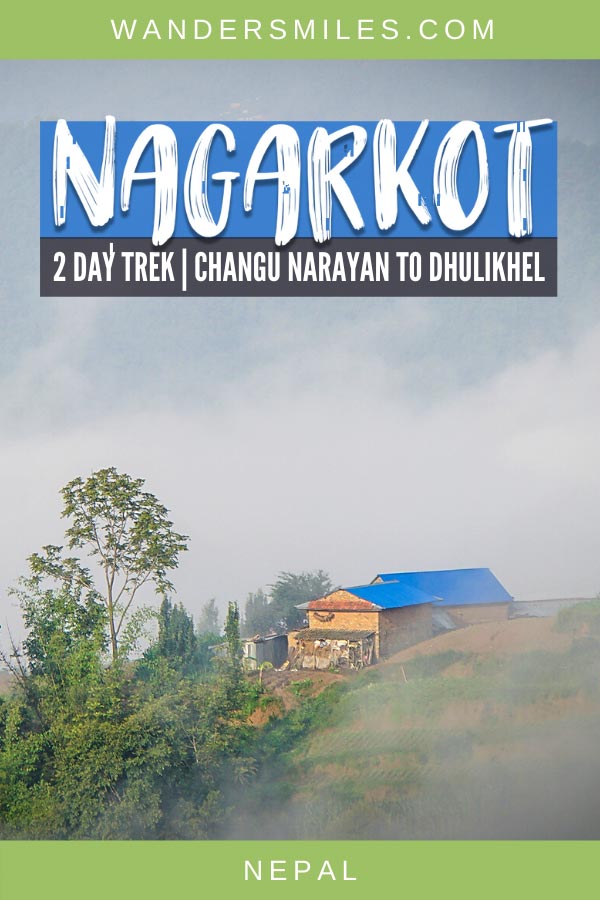 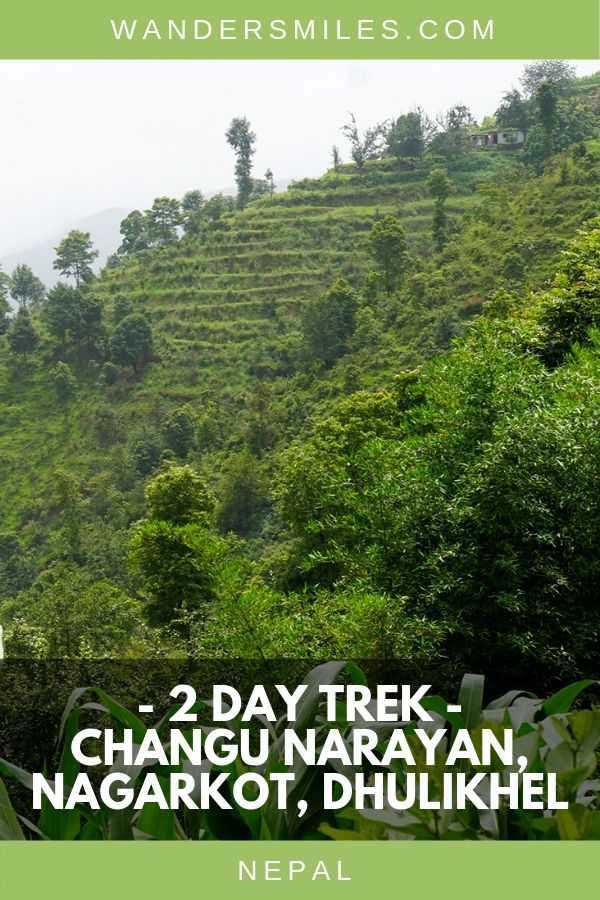 5 Incredible Things To Do in Qeshm | Iran

Hotel Mystic Mountain was an awesome hotel, totally recommend it!

Sounds like a challenge! I’m always up for a good trek and I hear Nepal is a great country for some good ones

It wasn’t too challenging, Nepal has some amazing landscapes to go trekking!

This is such a fantastic guide! I know lots of people do multi-day hikes but these shorter options sound much more like something I would do. I love the sound of all the different temples on the first day and so nice to see that people are still going about their day despite the arrival of tourism.

I really enjoyed this trek, it’s great that it’s only an hour away from Kathmandu too!

What an experience! I’d love to visit Nepal one of these days!

I’d head over there if you get the chance, it’s a wonderful country.