How to spend a morning in Amman | Jordan

Amman, Jordan’s capital city, is often unfairly treated simply as a stepping stone to the desert and the rest of this beautiful country. However, this modern, culturally diverse city has an ancient heart which must not be missed. There are treasures such as the spectacular Roman Amphitheatre to be found nestled amongst the bustling souks.

Looking up a traveller will spy the outline of the ancient ruins of The Citadel and the iconic dome of The Umayyad Palace stoically keeping watch over their city. We only had a long morning in Amman before heading to the Dead Sea but you can catch the highlights as I did.

Amman has a vast and rich cultural history. There has been a settlement here for thousands of years, historical records and archaeology suggest the existence of people as far back as 7250BC. Throughout the years it has seen rule by the Ammonites, Assyrians, Nabateans, Romans and lastly the Ottomans. Architectural evidence of each empire’s varying influence can be found sharing space with the modern buildings built since Amman’s recent expansion. It is a sun-baked, pastel-coloured mix of ancient and new.

To fully appreciate this white-walled city a traveller needs to not mind walking uphill. Endless steps and steep passages wind forever upwards but the views of the metropolis, surrounding hill-scape and a vague hope of seeing the nearby Dead Sea in the distance were absolutely worth the calf burn. 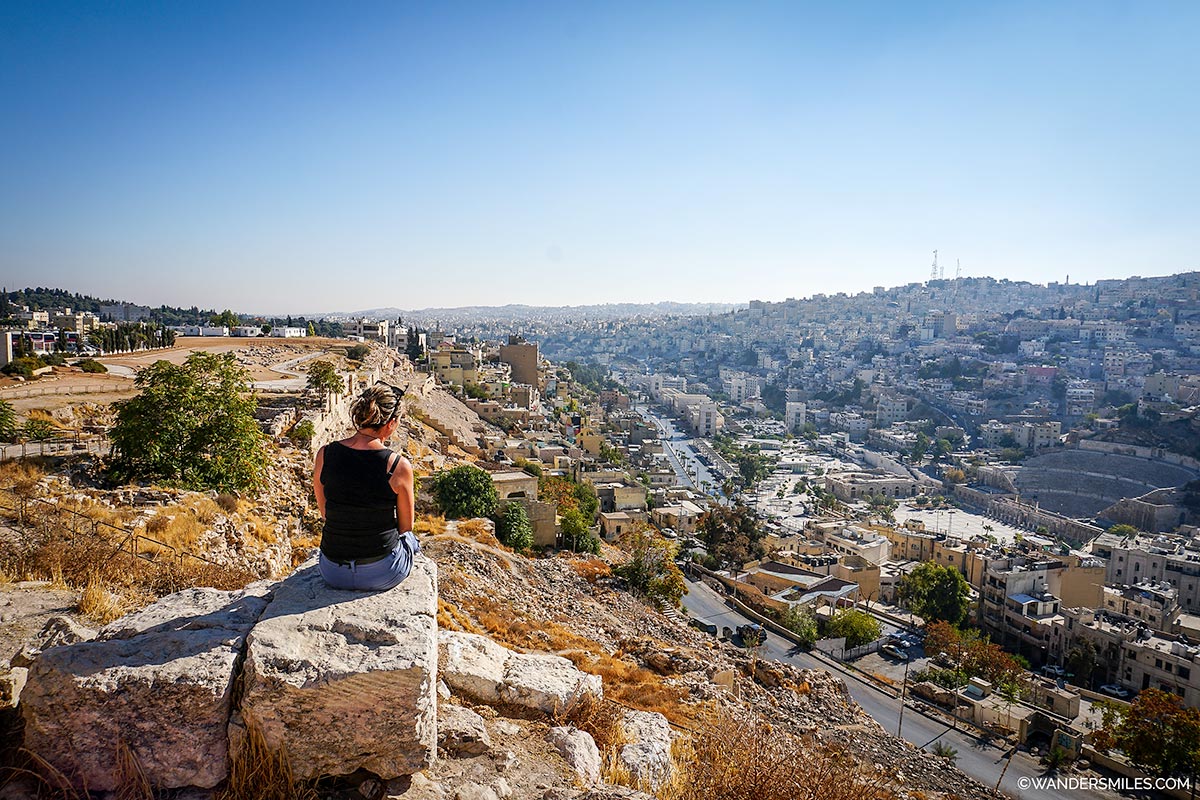 The Citadel and Umayyad Palace

The area known as The Citadel is one of the most important historical sights in Jordan. Perched high above the city atop Jebel Al Qala’a, these ancient ruins are what is left of Ammon-Rabbath, a settlement mentioned in the Bible. Bronze Age artefacts found in and around The Citadel prove that it has been a centre of trade and community for many thousands of years.

My feelings here are the same as the awe I felt while exploring Petra. It is truly humbling to wander in the morning light around The Temple of Hercules and the intricately carved columns, pillars and urns that have been witness to the lives of an incomprehensible amount of generations.

There is a quaint archaeological museum which is worth a look if you have time but beyond that, at the very peak of The Citadel area are the impressive buildings of Umayyad Palace, these intriguing relics from an Arab monarchy circa 720AD are fascinating. 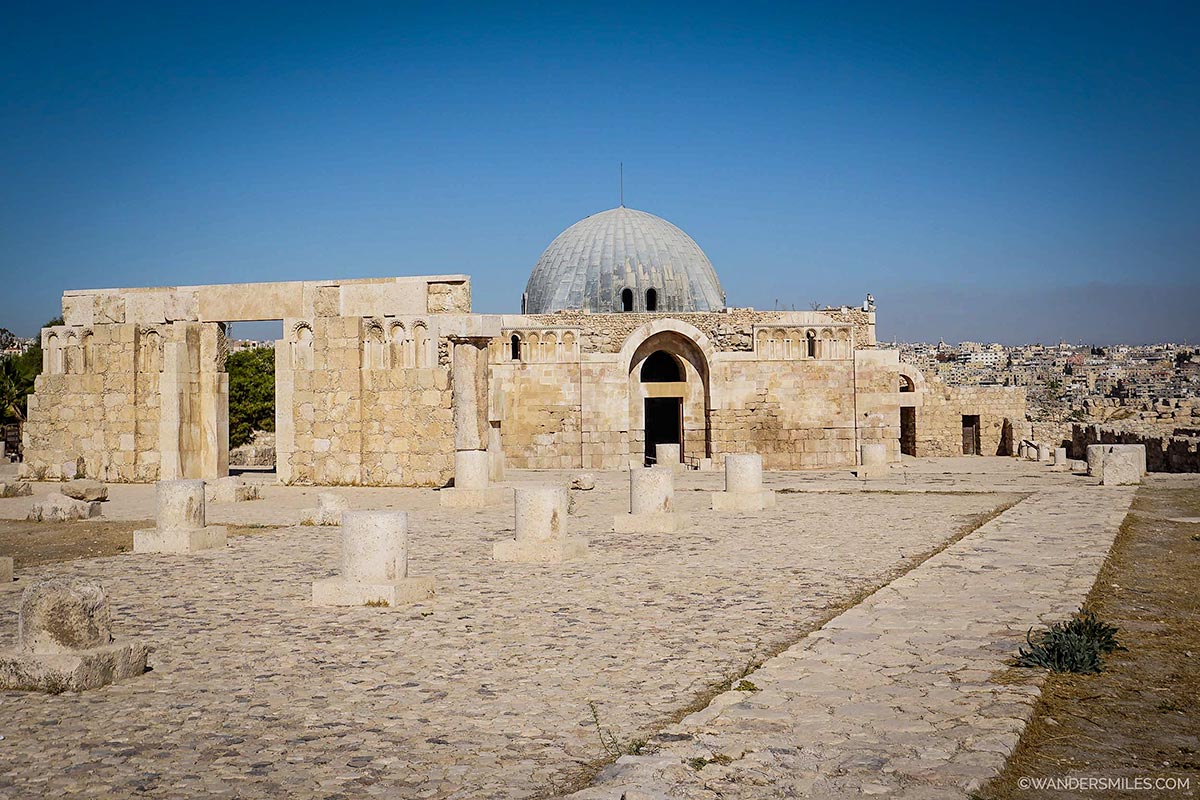 Domed and imposing, the main building of the palace was built by Abdel-Malik Ibn Marwan, the Caliph of Damascus. He used it as an audience hall to receive his military leaders and plan war strategy. It is remarkably well preserved considering how high and exposed it is. Archaeologists have reconstructed the roof to make modern use easier however the impressive ivory walls are intact and on either side of the arches in Persian style, delicate and intricate carvings can be enjoyed. 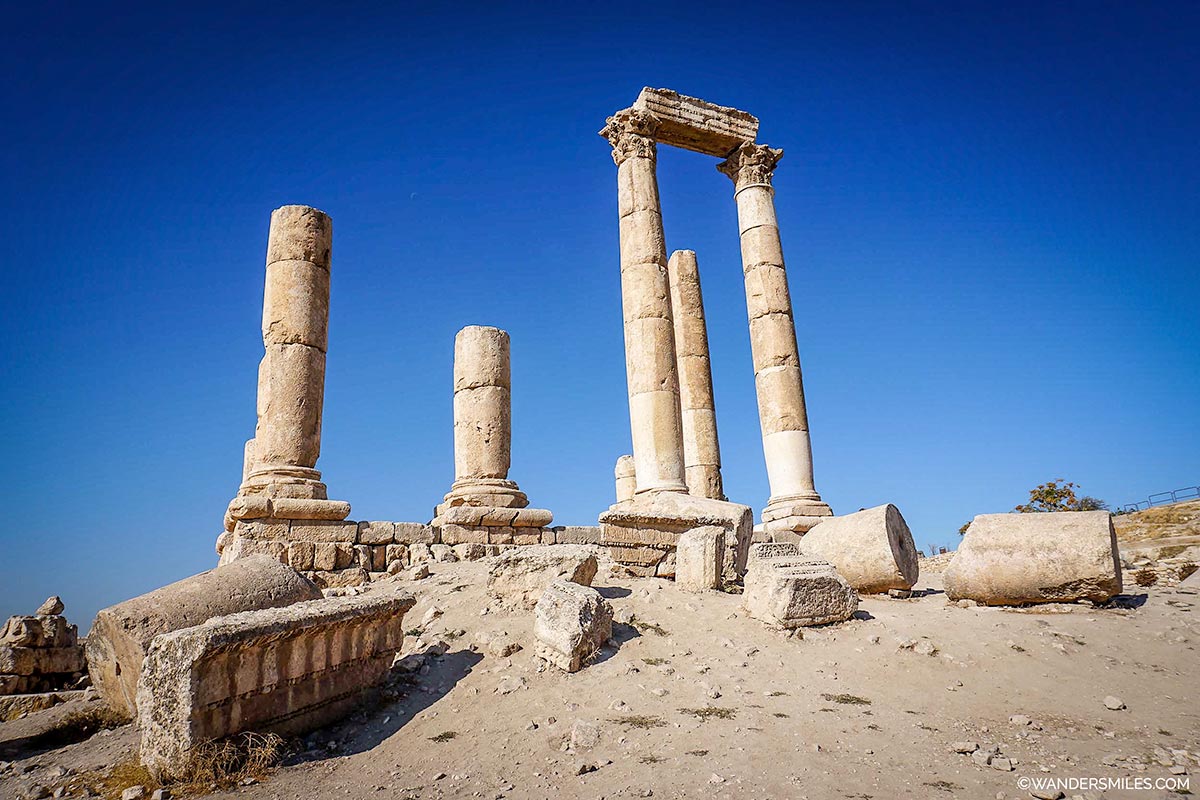 The Temple of Hercules at the Citadel

One of the things I enjoyed most about Amman was how easily the two sides of the city, old and new, sit so beautifully side by side. Tucked into a hillside In an unassuming residential area not far from The Citadel lies one of the most impressive examples of a Roman Amphitheatre to be found anywhere in the world. 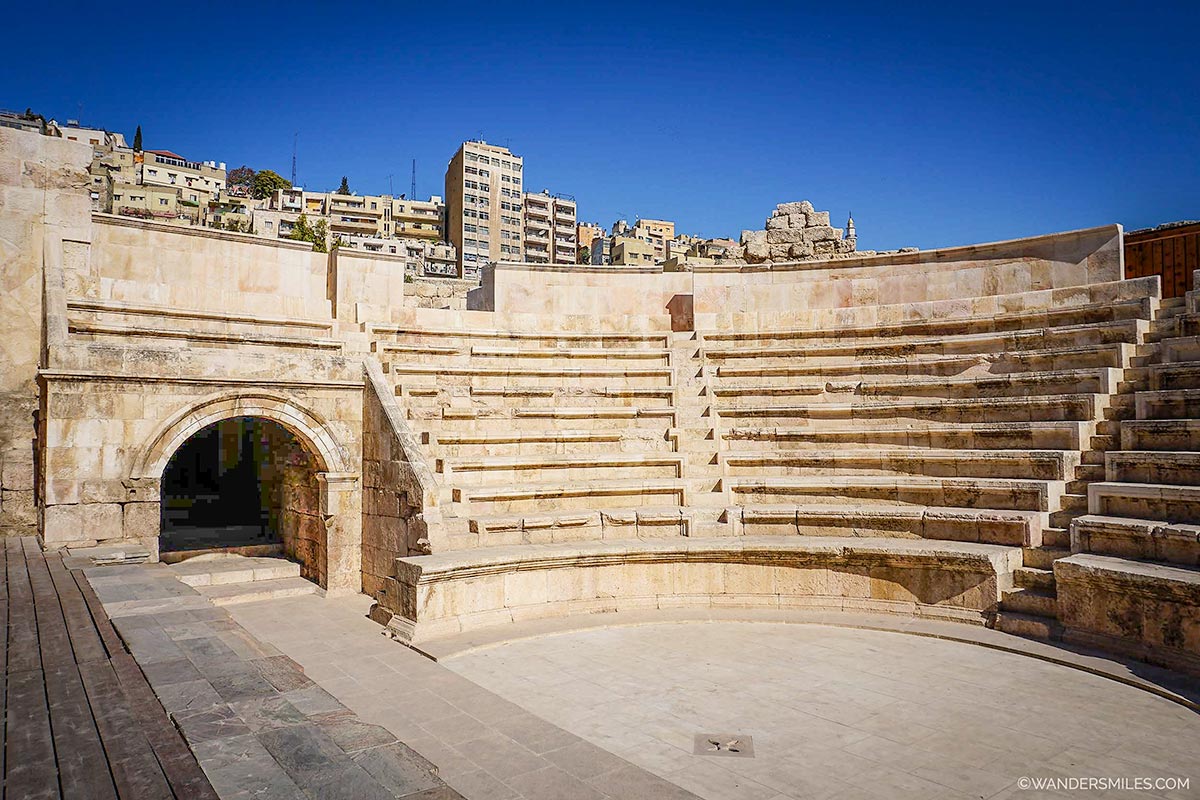 This 6000-seat monument to entertainment was built in the 2nd century AD when Amman was known by its Roman name of Philadelphia. The front stage, the wings and possible ‘dressing rooms’ are clear to see and from the top of the steep seating area, the acoustics are amazing.

When I visited there was a family whose small children were clearly loving pretending to be dramatic Roman actors on the vast stage and bellowing echoes into the arena. The Amphitheatre is certainly built with acoustic perfection in mind. If you stand in a certain spot your voice echoes further than if you move, you can just imagine the Romans giving their speeches to their assembly back in the day.

The museums attached to the theatre are worth a visit, they contain very beautiful examples of Roman costumes, clothing, fabric and mosaic. 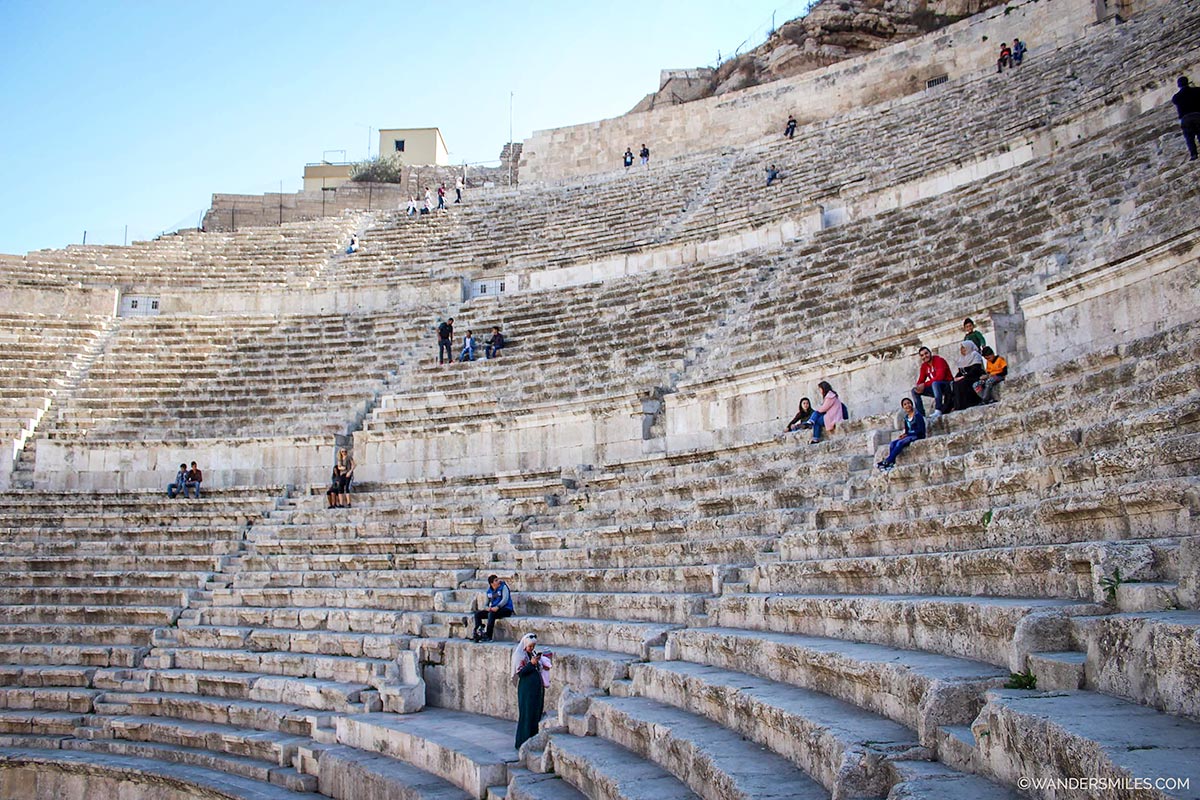 How do I get a Jordan Tourist Pass?

Jordan is awash with UNESCO World Heritage sites such as Petra, Wadi Rum, museums, castles, and more. You can easily spend one week in Jordan or even longer and the best way to look after your wallet and see as much as possible is to buy the Jordan Tourist Pass. If you wish to check out the prices separately for the attractions, check Jordan Tourism Board for the entrance fees.

What is the best time to visit Amman?

Jordan can get very hot and humid in the summer months, too hot to go exploring the outdoor historical sites. The best time to visit Jordan is from March to May or September to November.

How to get to Amman from Queen Alia airport?

TAXIS – They operate 24 hours a day and prices are fixed by law and are posted in the taxi park at the terminal exits. A taxi ride from the airport to Amman city centre should cost around JOD20. We recommend you agree on a price with the taxi driver to avoid an inflated price or a detour during transportation.

Where is the best places to stay and eat?

If you’re looking to stay in the city longer the options are endless with amazing places to eat and stay in Amman. Culture Trip highlights 7 the top hotels in Amman.

Book a tour of Amman

Useful links for your Amman trip

Get 5% off your travel insurance with HeyMondo. Benefit from 24-hour medical assistance, 365 days a year with single, multi-trip, and long-stay insurance, cover for Covid-19, and non-refundable expenses. The handy app makes this a simple process! They give a little back too by contributing to ‘Doctors Without Borders’.

SafetyWing for Digital Nomads. Benefit from 24/7 assistance, comprehensive and medical cover including Covid-19. Buy insurance whilst you are travelling, with the option of global health insurance. 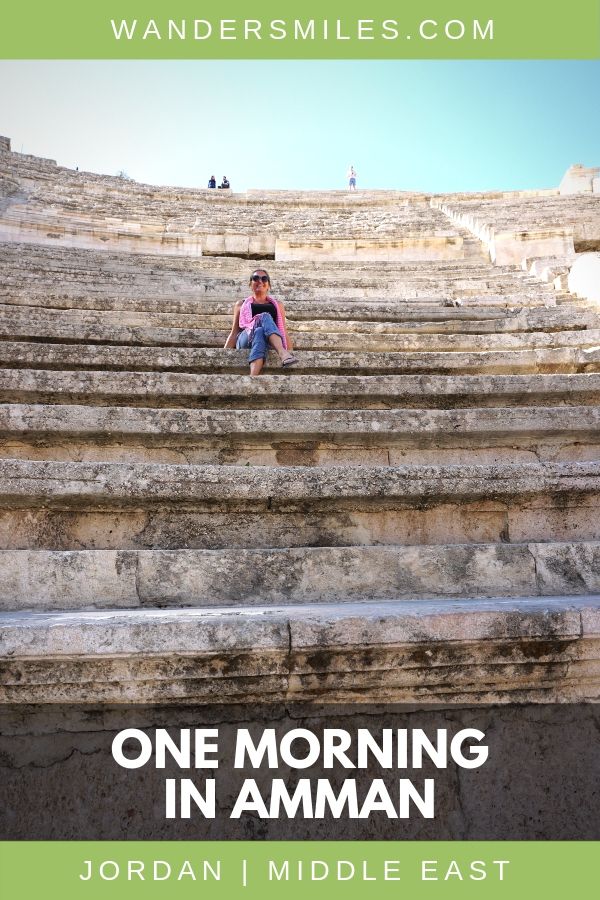 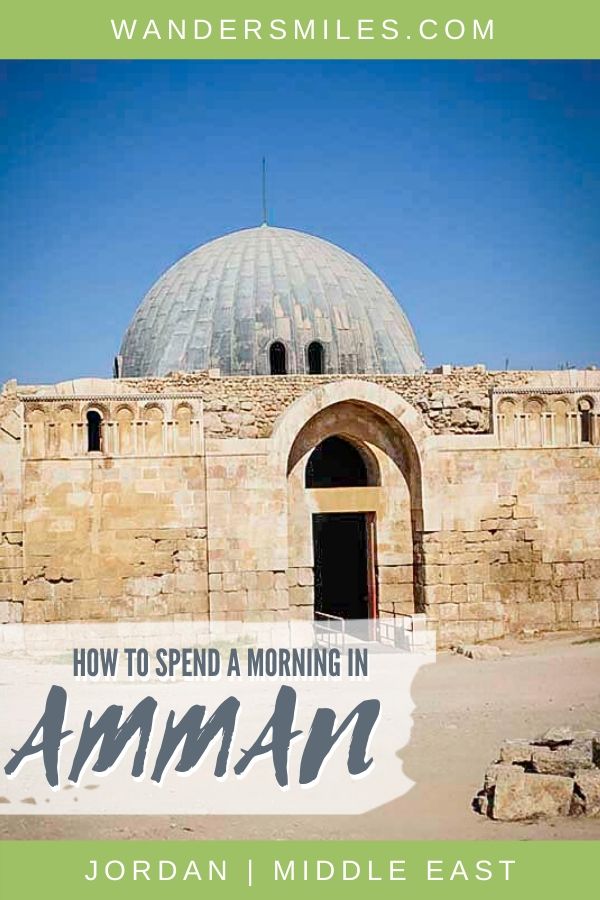 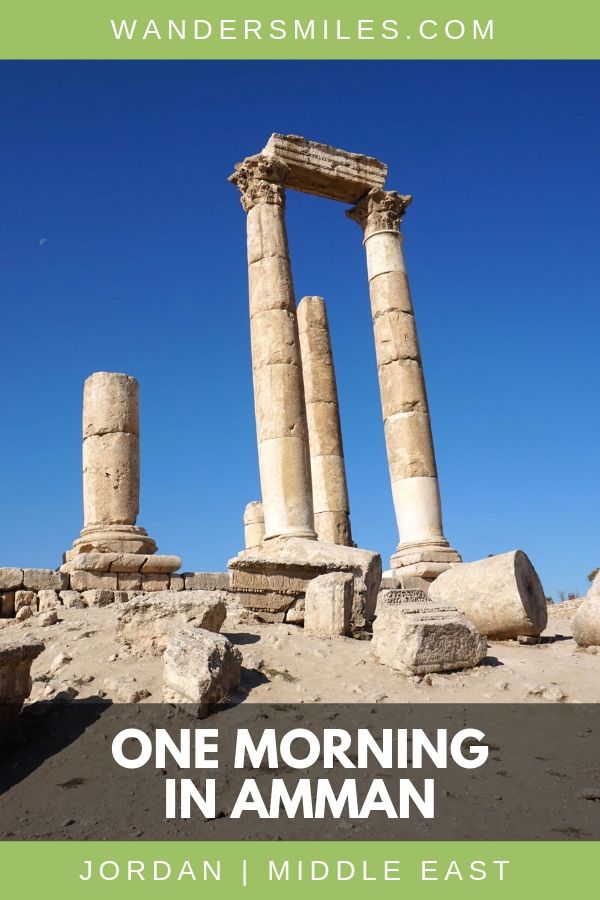 How to get the Dead Sea experience | Jordan