Kathmandu is a bustling metropolis full of traffic, mud from the monsoon rains, smiling people, and stunning cultural and religious monuments. The roads, small streets, and alleyways are labyrinthine and without a proper guide, it would be easy to miss all the important sights, sounds, and smells of this incredible city. I joined a three-hour Kathmandu city tour with Welcome to My Yard, a wonderful social enterprise that invests the money made from their walking tours of the city into the care and development of Kathmandu’s street children.

Sites on Kathmandu City Tour with Welcome To My Yard

The tour starts at the Kathmandu Guest House in the district of Thamel. It is the oldest hotel in Kathmandu having been established in 1967. The pale yellow and white building is gorgeous and so quaint. It made me smile to think of how many dirty and dusty heroes of the Himalayas have fallen exhausted into the hotel after being in the mountains for weeks. 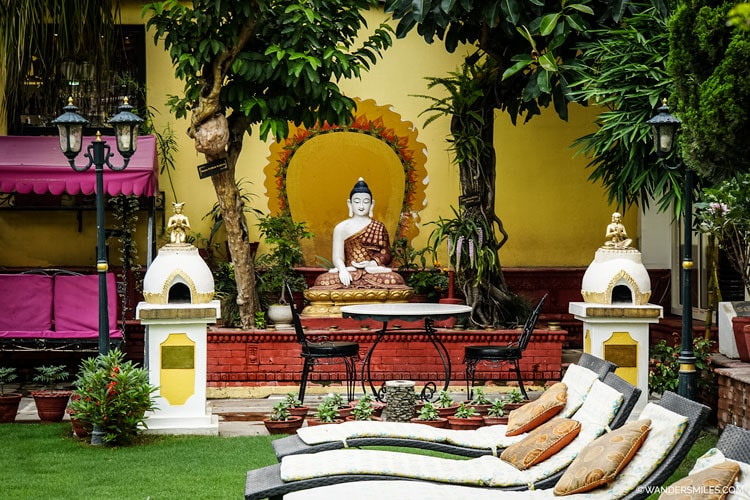 Narsingh was once the part of the city where the rich and powerful of Nepal built their fancy mansions. There aren’t many signs of this opulence left and it has become the main shopping area of Thamel, though there are still touches of religious and cultural significance throughout this part of the city. It was once a medieval site of Buddhist teaching and our guide shows us a small Hindu temple with an exquisite carving full of gods and goddesses above the main gate.

Narsingh was once the part of the city where the rich and powerful of Nepal built their fancy mansions. There aren’t many signs of this opulence left and it has become the main shopping area of Thamel, though there are still touches of religious and cultural significance throughout this part of the city. It was once a medieval site of Buddhist teaching and our guide shows us a small Hindu temple with an exquisite carving full of gods and goddesses above the main gate.

We continue to wander through the dusty, enclosed streets beyond Thamel. The shops are full of strings of prayer flags, a must-buy on a trip to Nepal. These small, colourful flags are printed with prayers and as they flutter in the breeze they are released into the air to find an answer or a resolution from the Gods for the person who placed them.

Thahity Chowk (courtyard) opens up before us and the bright white dome of a stupa surrounded by some of the prayer flags shines out against the grey clouds above. The stupa was built in the 15th century by a Tibetan trader and it sits in a small walled garden that is now also home to a vegetable market. Alongside the stupa is the deep red pagoda of the Nateshwar Temple. 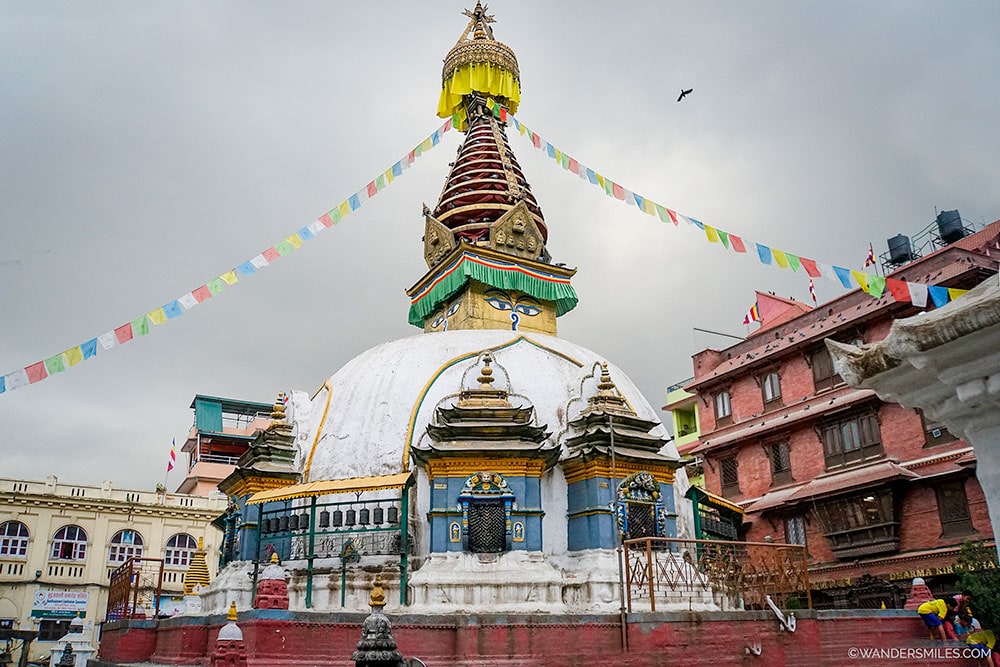 My guide shows us the beautiful silk fabric that is sold and made into Bakhhu, the traditional dress of the Sikkimese people. There are too many gorgeous things to buy in Kathmandu and I struggle to stop myself from shopping.

Sigal Chowk is home to a fabulous stupa called Kathesimbu. It is a 16th-century copy of the Swayambhunath, the stupa that sits high above the city, and was built so that the people who are unable to travel can come and pay homage to Lord Buddha within the city itself. Notice the eyes of the Buddha on all four sides of the stupa, the prayer flags draped from the top and the mass of pigeons that congregate there! 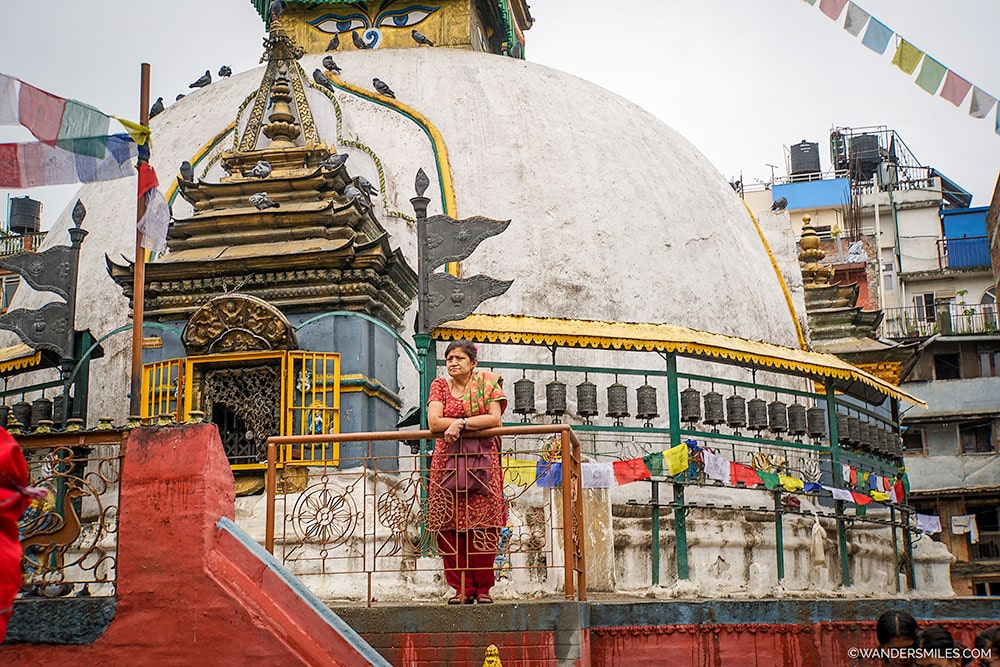 Tucked away behind the stupa is a temple dedicated to Harati Agima. He is the God associated with smallpox and when small children become ill their parents come here to pay homage in the hopes that he will heal their child.Two monasteries, a Tibetan and a Nepalese are also in Sigal Chowk and can be explored.

With only three hours to discover Kathmandu’s secrets, it’s the statues that our tour focuses on. In the Nepalese monastery look out for the quartet of statues that depict the four stages of Buddha’s life. In the Tibetan monastery, a statue of Avalokeshwor stuns with his 1000 hands and 11 heads the high number of which represents how powerful a God he is.

Our guide explains to us how Buddhists pay homage to their Gods. Rice is collected in a bowl and given as an offering. Everything is done quietly and with great reverence which I find really moving and peaceful to watch.

As you leave Sigal into the Bangemuda area there’s a quirky little place of worship that we could have easily missed. It is simply a piece of wood that for many years has been worshipped as the god of toothache. Locals suffering from their teeth would come here and pay homage by nailing a coin into the wood.

I’m not sure how well it worked as a cure but the dentists of Kathmandu are apparently doing well, meaning this particular god has become less popular. 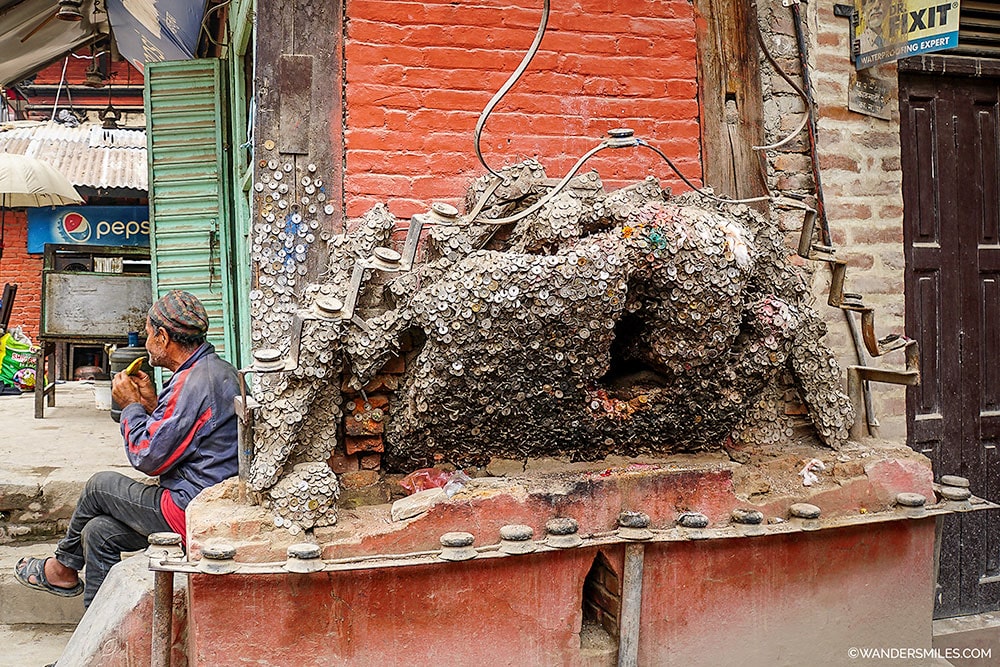 Feel the buzz of Ason Bazaar

The bazaar is always the place to go if you want to get a sense of a city from the point of view of the locals. The colours, energy, voices, and general hubbub of the Ason Bazaar were great to experience. You can literally buy anything for Nepalese domestic life here. The smells are incredible, so evocative and the vegetable and spice market was fab to look at.

The bazaar is also the location of the Annapurna Temple and as it is dedicated to the Goddess of Abundance, the southeast corner of a bustling market selling everything from electronic equipment to fruit is the perfect spot.

The Goddess is represented by a bowl of rice and on Sundays you will witness locals paying homage by walking slowly around the temple, touching a coin to their heads which they then throw into the temple. 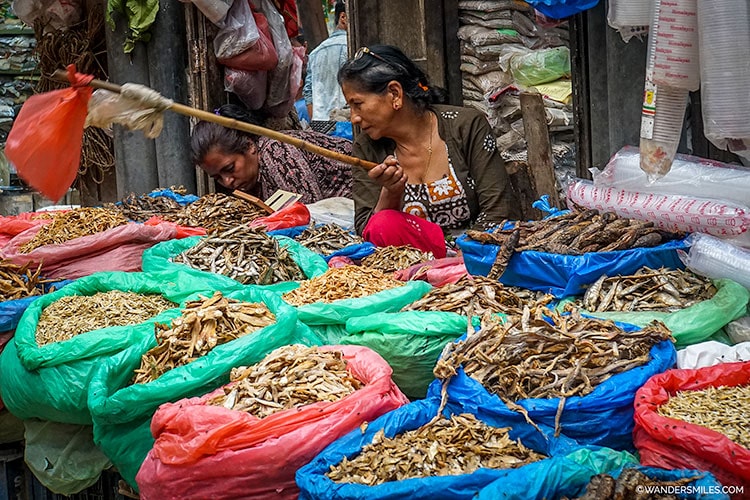 Jana Bahal is a courtyard just a short walkway from the Ason Bazaar and it is here that the rather awesome Seto Machindranath temple sits. Inside is an impressive white statue that was built by a King in the 10th century. Stolen by invaders and thrown into a river, it was found many years later and returned to Kathmandu. The temple was built in the 17th century to house it.

The statues surrounding the temple are both unusual and mysterious. One is thought to be of Maya Devi, Buddha’s mother, she is covered in red vermillion so you can’t miss her.

Inside Jana Bahal is a small pottery square with earthenware from small oil lamps to big flower pots, all made in nearby Bhaktapur. You can stroll around the small bead markets selling traditional jewellery to be worn draped from shoulder to waist. It’s a maze of alleys and archways with lots of secret courtyards with cultural treasures waiting to be discovered. 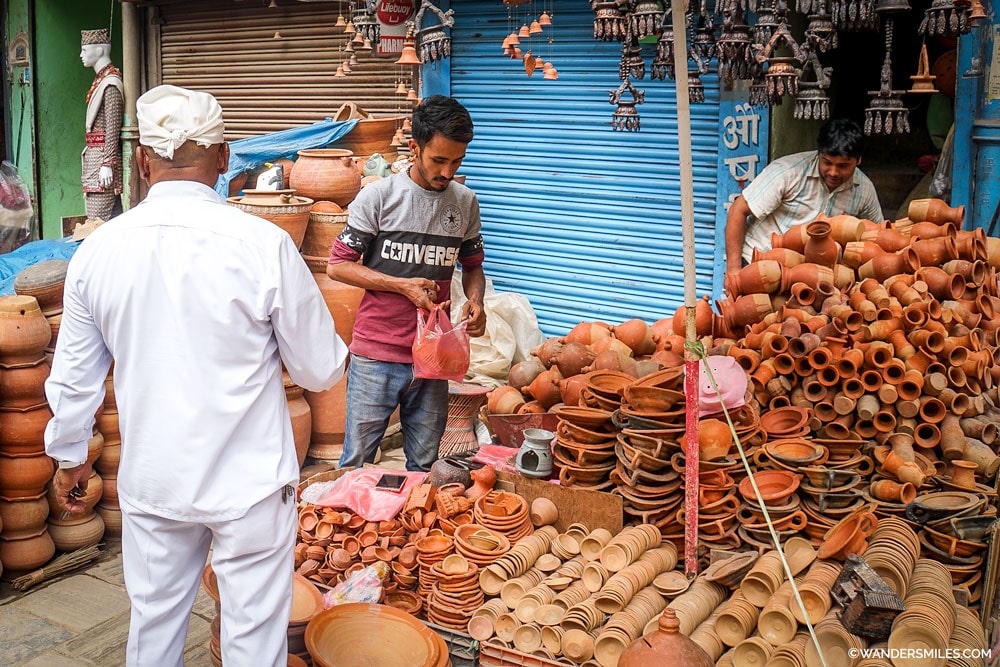 RELATED ARTICLE: WHY I DIDN’T SUMMIT EVEREST BASE CAMP

Savour a lassi in Indra Chowk

Just before we arrive in Durbar Square, at the end of our tour, we stop in Indra Chowk. This square is one of the main market junctions and is a good place to start your own explorations from.
There are many shops and several temples dedicated to Shiva but our guide was more interested in having us try the local and delicious drink of Lassi. Indra Chowk is famous in Kathmandu for selling the best version of Lassi. It’s made from yogurt and fruit for flavour and was really welcome after a couple of hours mooching around the dusty streets.

Delve into the history of Durbar Square

Durbar Square is the traditional heart of Kathmandu. Kings had their coronations and ruled from this part of the city. Durbar means palace and the square is made up of three districts. The architecture is stunning and the decorations, styles and sheer scale of the place are amazing. There is almost too much to look at and learn. Our guide had to edit the tour as the site was too big to cover everything in the time we had left. I recommend at least half a day to explore.

The Hanuman statue is appropriate for a city full of monkeys. This statue of the monkey god was built in the 17th century and he represents strength and protection. Elsewhere in the square is a scary-looking image of Lord Shiva who is the God of Justice. 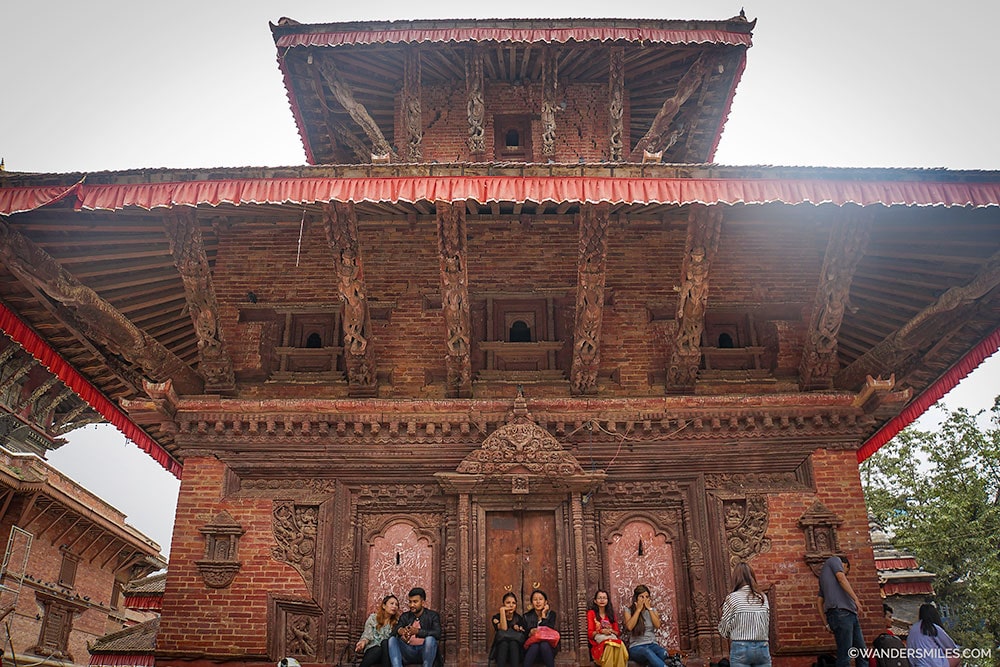 Wait for the Kumari in Durbar Square

In the corner of Durbar Square is the Kumari Ghar it is the home of a living goddess, the Kumari, who is thought to be the incarnation of the goddess Taleiu. The Kumari is a young girl who is chosen by priests between the ages of 3 and 5. She lives in the house overlooking a small but very beautiful courtyard and spends her days studying and answering devotees’ questions by changing her facial expressions. Once she bleeds, either through menstruation or being cut accidentally, she returns to her human form and the search for the new incarnation begins. We waited for some time for her to appear for only a few moments, no photographs of her are allowed. 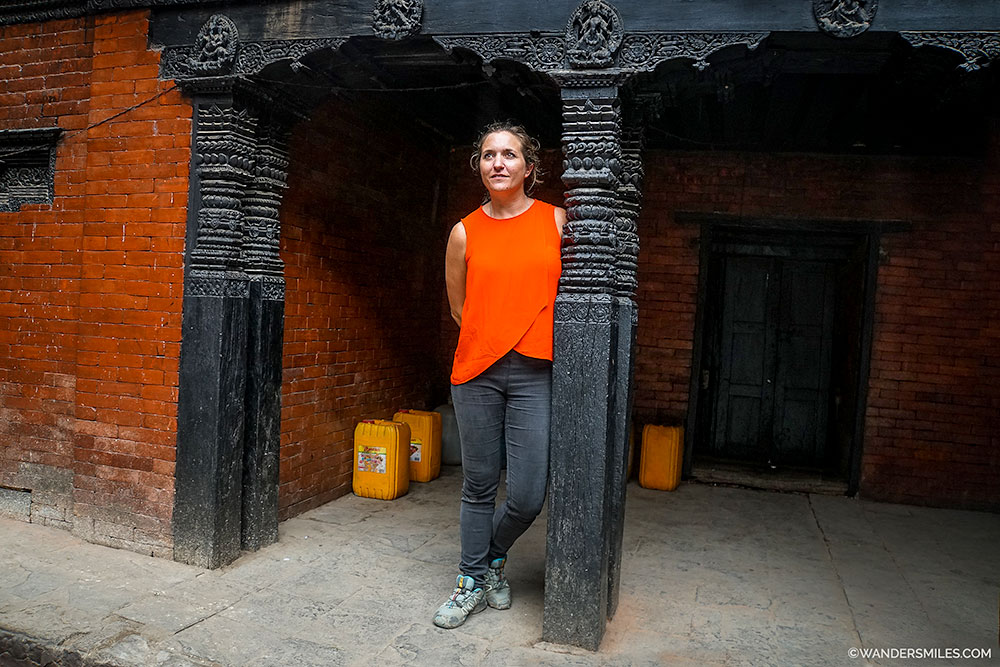 The damage from the earthquake in Kathmandu

Many of the buildings in Durbar Square and the rest of Nepal have been damaged by the 2015 earthquake and work is ongoing to reconstruct these precious monuments. The earthquake and its aftermath have caused a large drop in the number of tourists visiting the country which has affected the economy badly. It’s such a shame as this is the time that Nepal needs people to visit the most and there is really no reason not to travel to this amazing country.

Why support Welcome To My Yard 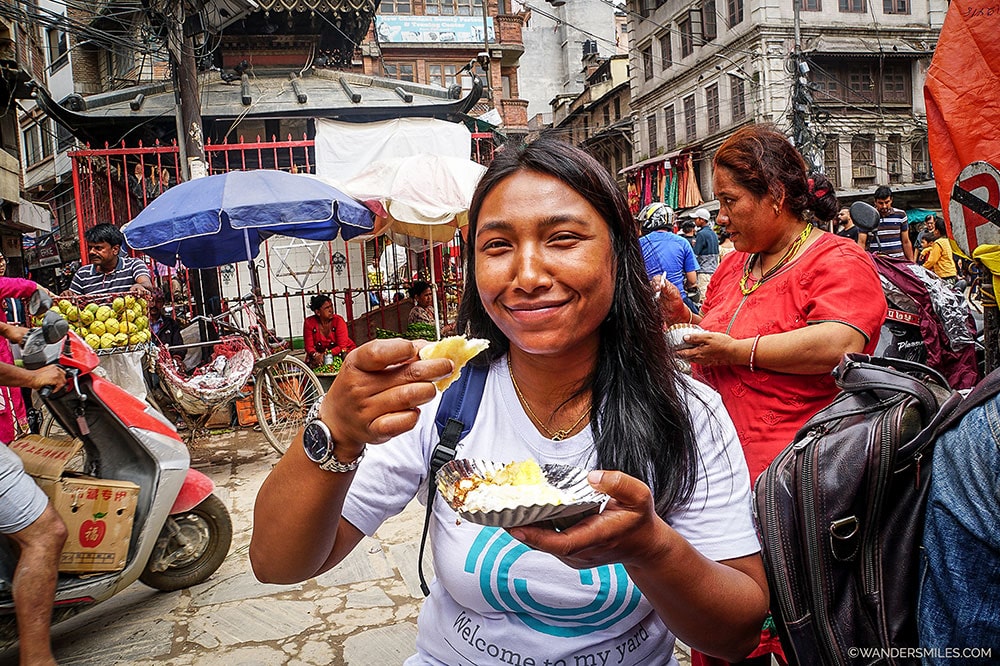 Useful links for your Kathmandu trip

Ready to get planning and check these links for visiting Kathmandu.

LOVE THE BLOG ABOUT KATHMANDU CITY TOURS WITH WELCOME TO MY YARD? PLEASE PIN IT!

12 Best Places to Stay in Prague | Hostel to Luxury Hotels

Wow that is indeed a literal virtual tour of Nepal. Very much descriptive to provide the guide. Love it.

It was a brilliant tour, found out loads of local information and had great fun too!