As we sailed towards Damoy Point in the Antarctic Peninsula, the weather was expected to take a turn for the worst and the number of icebergs in the ocean were increasing. After three lucky days, this was not what I wanted to hear before we embarked on camping on ice in the Antarctic wilderness. So how was extreme camping experience in polar night of Antarctica?

Following a briefing from the experts, we dressed ready for survival on the snowy land with layers of thermals (top & bottom), fleece jacket, thick socks (with spares), warm gloves, woolly hat, waterproof trousers and down jacket… and, of course, your rubber boots! Fuel is forbidden so it pays to wear the right gear!

Each happy camper collected their waterproof bag containing their kit on board – inside we found a breathable bivouac bag, a thermal mat plus an one extra mat for comfort and two sleeping bags.

Food is not allowed on the islands of Antarctica so we left after dinner in the Zodiac towards the landing of Damoy Point, waving goodbye to our fellow passengers who will spend the night tucked up inside their cosy cabin.

The guides took a small portable camping toilet and carefully built an igloo-style wall for privacy allowing you to take in the views as your took care of your business. Regulations in Antarctica don’t allow any human waste to be left on land to protect the environment so if you need to go, it’s either the portable loo or a urine bottle. Personally, I held all in until I got back to the ship.

Digging your polar grave for camping

So there’s a technique to protecting yourself against the unknown weathers whilst camping in Antarctica. You need to map out the size of your ‘grave’ and split it into squares then create a wall around the perimeter. Calling it a grave sounds more sinister than it really is! It’s not a case of getting your sleeping bag out, there is actual work to be done. We made it more tricky by building a ‘grave’ for four, we figured body heat would help in the night! 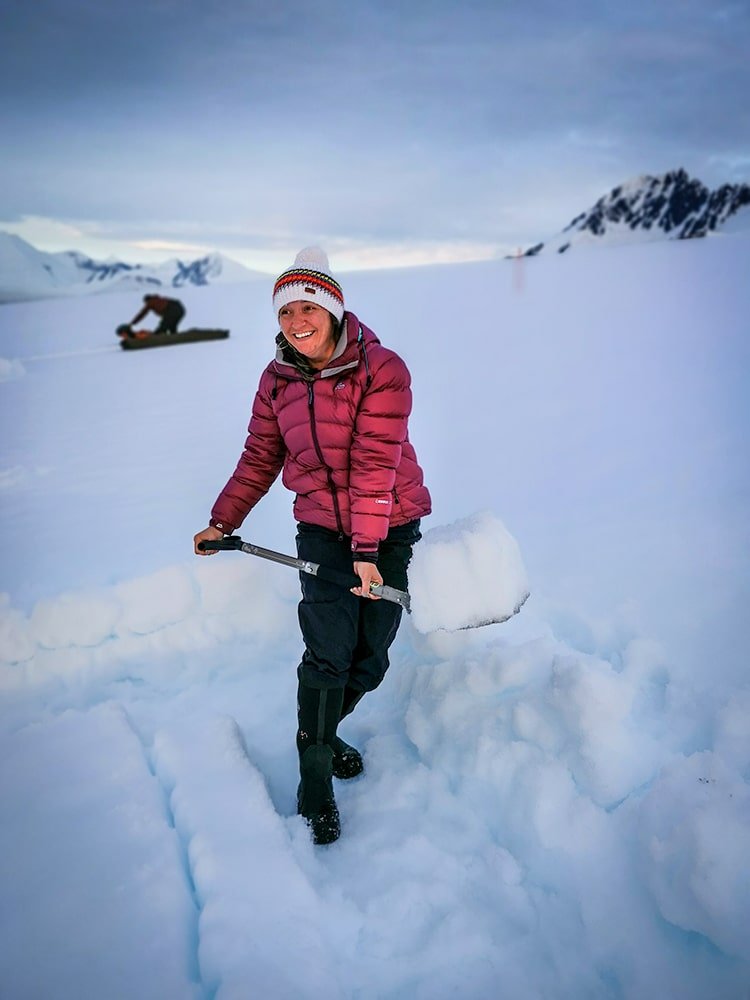 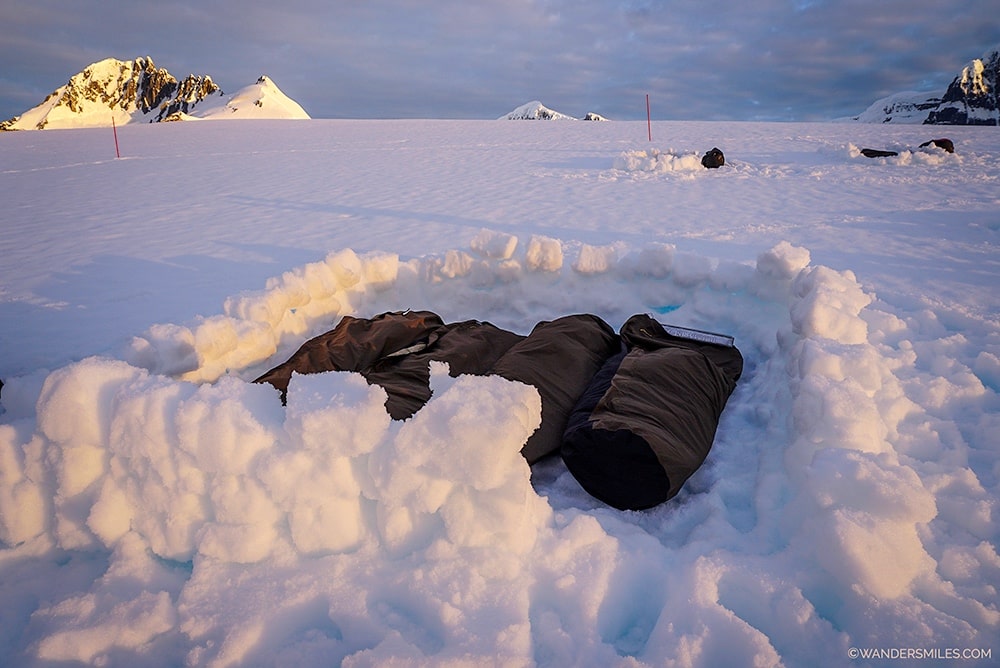 Glorious sunsets before zipping up

The thought of sleeping in the wilderness of Antarctica was way too exhilarating, and the fact that we nearly missed the opportunity because of the weather, made it even more special. Watching the skies change and evolve with the glowing icebergs was the perfect way to doze off in the snow. 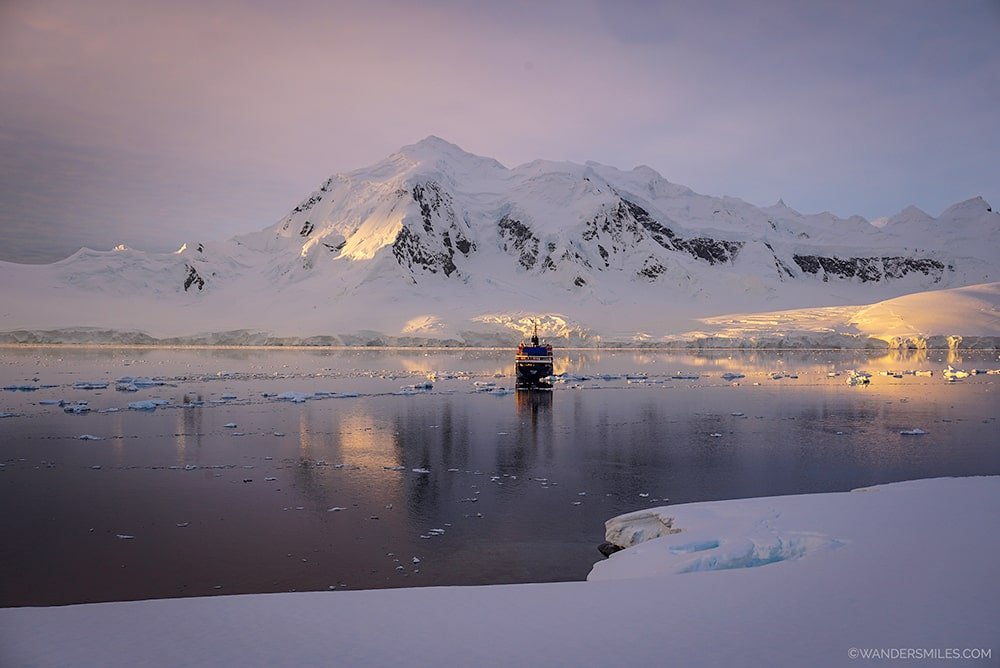 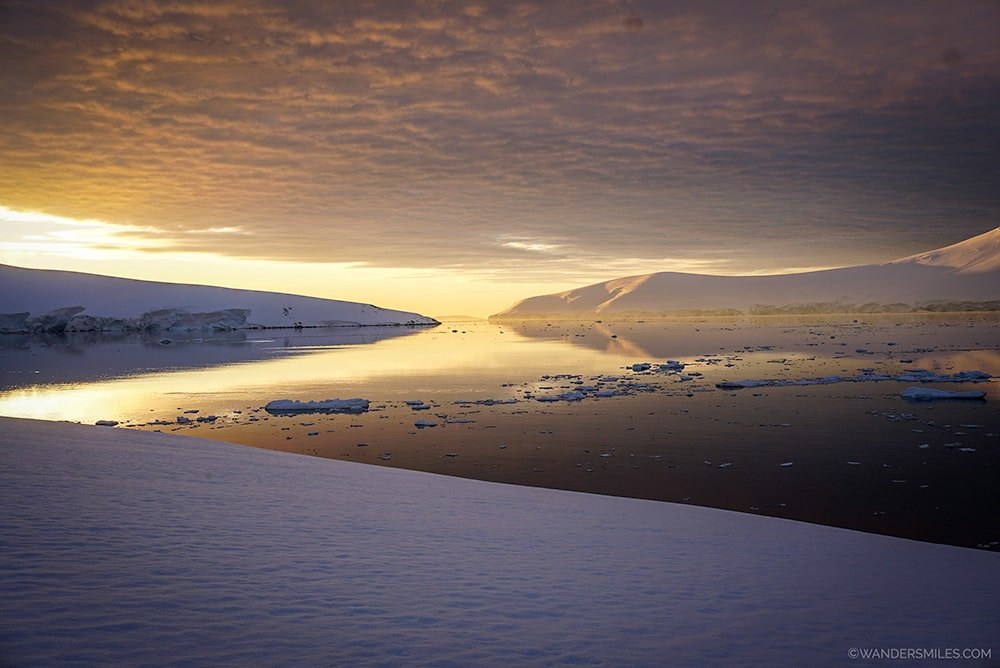 RELATED ARTICLE: For more about wildlife in the Antarctic Peninsula, read about Orne Harbour or Gentoo Penguins on Cuverville Island.

How comfortable was camping in Antarctica?

I was pleasantly surprised at how well I slept once I’d got to sleep with a snorer in the camp. I can’t talk though, apparently I purred like cat. The mats and bivvy bag made for a snug cocoon to see you through any climates. I was still blissfully sleeping when the faint noise of people woke me up at 5am, everyone was packing up and nobody thought to give us a nudge! Apparently a see of mist came over at 2am (reported by the Captain who was on careful watch from the ship) causing layer of frost across our bags, something I had been quite unaware until as I unzipped myself in the early hours.

Before we left for the Zodiac feeling a little dishevelled, great care was made to fill in the holes to prevent the penguins from falling in. Everyone ensured all bags and gear were collected and loaded onto the Zodiac. Even a  Gentoo Penguin stood on shore almost waving goodbye. Although the hot coffee and biscuits back on the ship were a welcome, this really was an unforgettable night on the white wonder of the seventh continent. The smiles say it all! 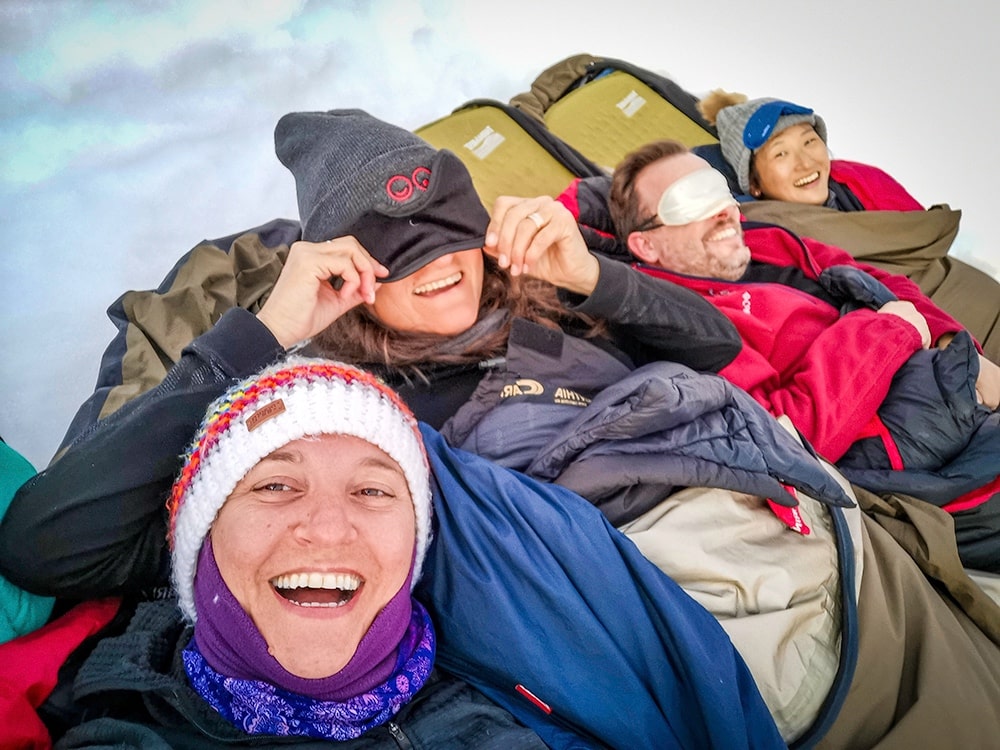 Travelled with on Ortelius with Oceanwide Expeditions booked with World Expeditions.

LOVE THE BLOG? PIN FOR LATER!