WHAT TO SEE AT PASHUPATINATH TEMPLE AT DUSK

Aarti is the ritual conducted in front of the deity by moving lamps in a circular fashion and dedicating their act to the Divine. The same rituals are performed in Varanasi but have only become a regular tradition at Pashupati since 2006 and start at 7 pm each evening. The followers perform a dance called the Tandav to pay respect to Lord Shiva. So visiting Pashupatinath Temple at night, you will find an electric atmosphere and you can feel the euphoric energy from the dancers. 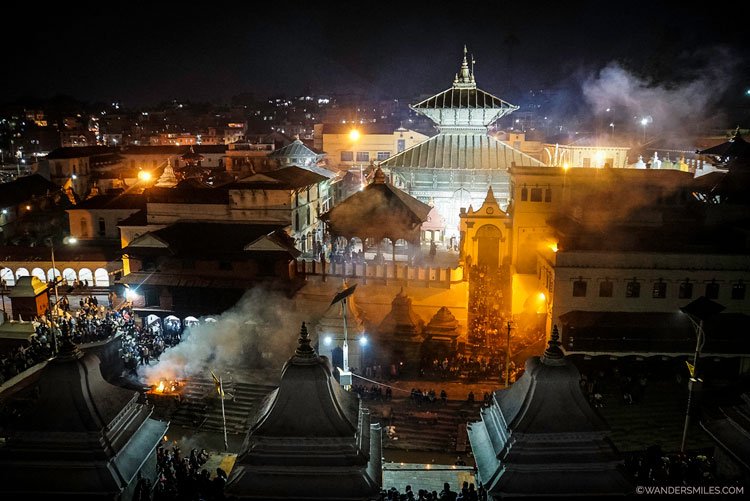 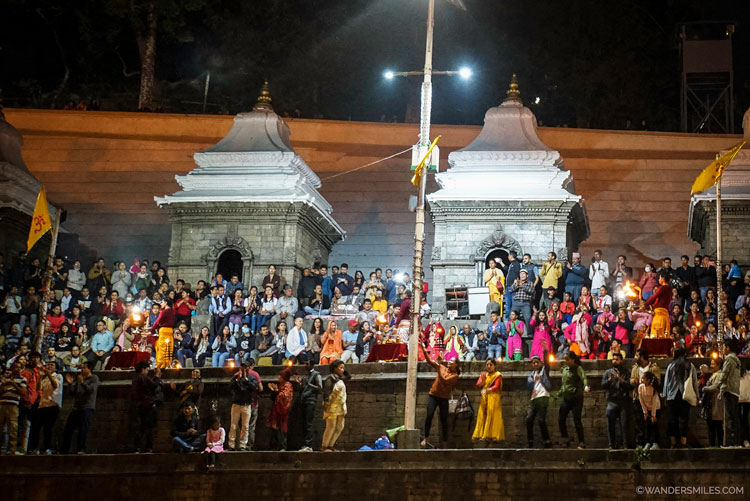 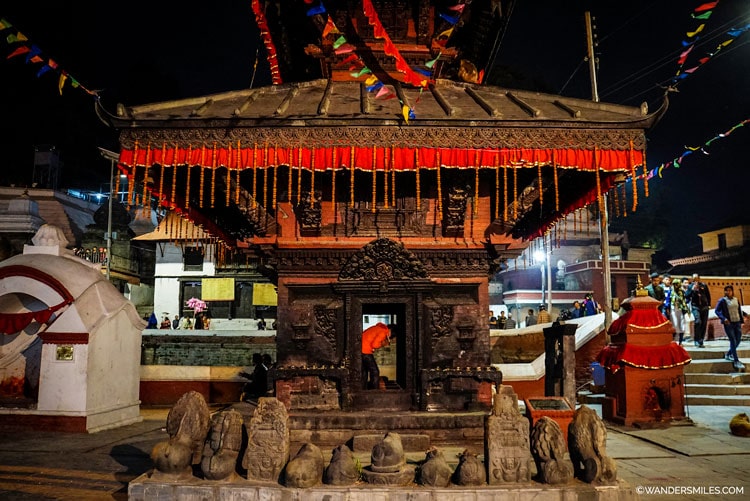 See the funeral pyres at Pashupatinath

In sharp contrast to the Eastern ghats of the Pashupatinath where life is celebrated and devotees will take a ritual bath in the holy river, on the Western plateaus families are cremating relatives. Pashupatinath really is a place where you are unequivocally faced with life and death.

Cremations take place a day after death has occurred and the bodies are brought to Pashupatinath for the cremation by the Bagmati River, it is believed that a Hindu cremated here would be reborn as a human in his next birth. 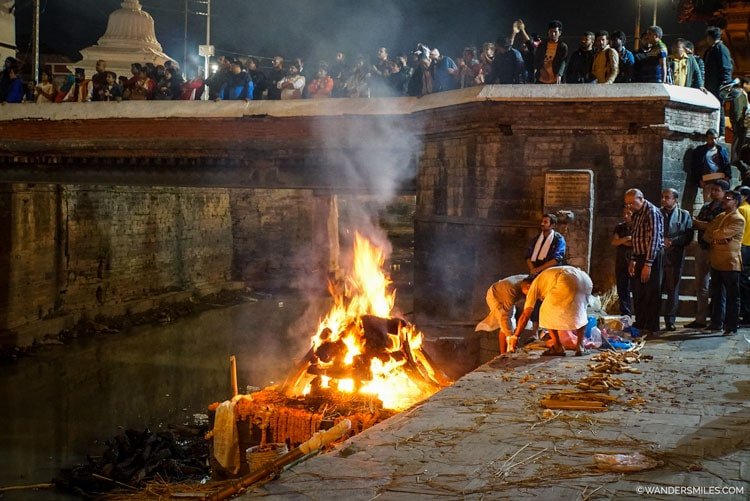 There were three funerals of ordinary Nepalis taking place daily on the ghats to the south of the temple. One was just being prepared with wood being placed on the plateau, close relatives carry a stretcher with a body on, and the body is covered with white shrouds. The body is carried around the wood pile three times clockwise and then the oldest son walks around the body with a lit piece of wood and kindles the wood near the mouth of the deceased which is where is it believed by Hindus that the spirit leaves the body from.

Once the pile bursts into flames, the body is covered with wet straw soaked from the holy river creating white smoke. The priests will perform prayers and chants as the families watch on. Wet straw is added to the fire and it can take 3-4 hours to burn. 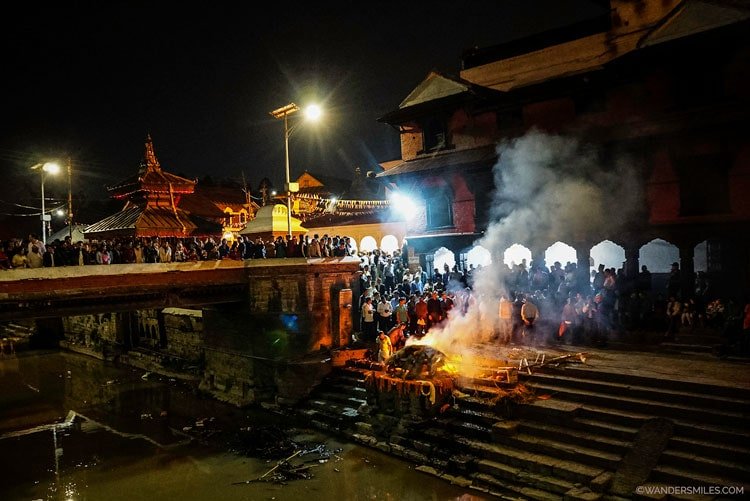 Having visited Pashupatinath Temple at dusk, the Sadhus (holy men) had retired to their living quarters for the night and my guide took me in to meet them. There was a courtyard of Sadhus but we had the main man to see, we knocked on his door and he welcomed us in. He has become a Sadhu at the age of 5 and had no sex or marriage as he devoted himself to his God.

His Rasta dreads on his head and beard were now a whopping 2m long and were pretty heavy when he unknotted from the top of his head and rested around my shoulders. The Sadhu is happy to pose for photos but he will expect you to cross his palm with rupees, Sadhus officially depend on gifts. 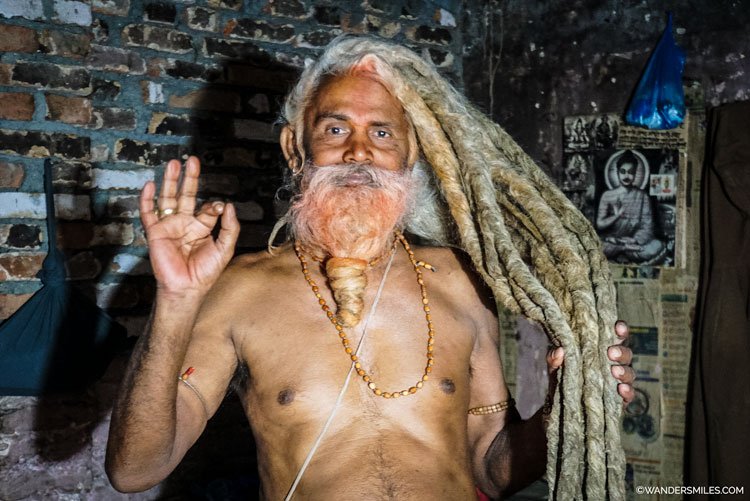 PASHUPATINATH AT NIGHT: THE ESSENTIALS

PASHUPATINATH TEMPLE AT NIGHT WITHOUT A TOUR

The buses are super dirty and I had a bandaged foot following my failed Everest Base Camp trek so it was a taxi for me from Thamel. It will cost around 500 NPR one way but I got the taxi to wait for me as the drivers at Pashupatinath can take advantage and charge you 3 times as much to return. My taxi waited 1.5 hours and I gave him 1300 NPR.

On entering the Pashupatinath complex, I was stopped by a local guy who claimed to be a guide and he was, he had a license to prove it. Expect to pay between 700-1000 NPR for him to show me around and give me the lowdown of the rituals and traditions of Pashupatinath, took me up to the Pandra Shivalaya on the terraces, in to see the famous Sadhu and guided me to some great photo spots. Well worth it! However, there are scammers out there so watch out!

There is normally a 1000 NPR admission fee but my said there was nobody on the gate. Non-hindus are not allowed to enter the temple so you just get to wander round the outside of the temple, the funeral ghats and along the river bank.

The site is open every day from 4am to 9pm but it is closed between noon and 5pm. Give yourself around 90-120 minutes to explore the site properly.

Photography is allowed at the Pashupatinath Temple but do remember, it is a place of worship and where families go to cremate their loved ones, and show them respect at this time.

Pashupatinath attracts as a holy place a lot of sadhus. These men with their colourful painted faces and their long Rasta hair know that they are very photogenic, this seems to be big business for them too. You will find this mainly in the daytime though.

SHOW ME THE LOVE, PIN THIS FOR LATER!

Very cool that you were able to meet and interact with a Sadhu. It seems like hiring a local guide would be well worth the extra cost.

That was certainly a highlight to meet the famous Sadhu at Pashupatinath Temple, the guide was really informative.

Wow, we have yet to get over to Nepal but Kathmandu is definitely on my bucket list. Being from New Orleans we often explore the death cultures in travel because it is such an important theme here in our city with our Cities of the Dead…in fact our motto here in New Orleans is that we put the word FUN in FUN-eral. So I am not going to lie, seeing the funeral pyres at Pashupatinath would be very interesting to me.
I know so little of their faith and religion so spending time with a Sadhu also seems very cool as it would be a great way to learn how they see God and Religion!

If you’ve not been to Nepal, you really need to visit, I adore the country. The people are lovely and you will always experience something new.

This is very interesting! I didn’t realize that their funeral processions were so elaborate with pyres and all. Very informative look at the temple and the dedication of the holy men. Thanks for sharing!

I saw the same thing at Varanasi in India, it’s very interesting to witness and find out about.

I visited the Pashupatinath temple during my trip to Nepal last year and I was awed by it. I think it was arguably the most fascinating temple I saw in Nepal. Hiring a local guide is cheap as you mentioned and it’s always better to have someone to tell you more about the place but I didn’t take one but I read a lot before I visited and overall, still had a great experience.

I think you can still get the experience without a guide, it’s hard not to soak up the atmosphere. I did enjoy getting the background information first hand though.

I have only good memories from Pashupatinath in Kathmandu. And I was also lucky to see a funeral. The surrounding park is beautiful, the monkeys not so frindly, but the atmosphere is 100% authentic. Wish to go back there one day.

This was the 2nd time I visited which is why I wanted to experience the Pashupatinath Temple at night with the ceremonies.

I have actually been there 3x but never at night! I never even thought about going then. So interesting! I always found the ceremonies for the dead so interesting – and the colors are beautiful. It’s definitely a must-see for those visiting Kathmandu!

I do hope you get to experience at night, it was a whole different experience.