How to Photograph Mountain Gorillas in the Congo | Laia Lopez

Shooting wild photography is perhaps one of the most striking typologies since it brings us closer to an unusual world. Having the opportunity to photograph mountain gorillas in the Congo and being face-to-face with many other wildlife species is the dream come true but how do we get that perfect capture?

We have all seen documentaries or photographic reports of wild animals that we have never seen live but, as the ‘wild’ adjective already indicates, it is unpredictable. So, to have a good photograph at a technical and story-telling level, it takes a lot of patience and a lot of shots to get the result we are looking for. Sometimes we get unexpected results in wildlife photography because if there is one thing we cannot control animal behaviour, therein lies the magic.

Prepare for your environment

The terrain whilst shooting wildlife photography can vary greatly from dense jungles, open fields of the savannah, forests or even glaciers. Each of these places requires different preparation – it is not the same to walk through the jungle, with the high humidity, as to be sitting in a jeep waiting for the animal to move. 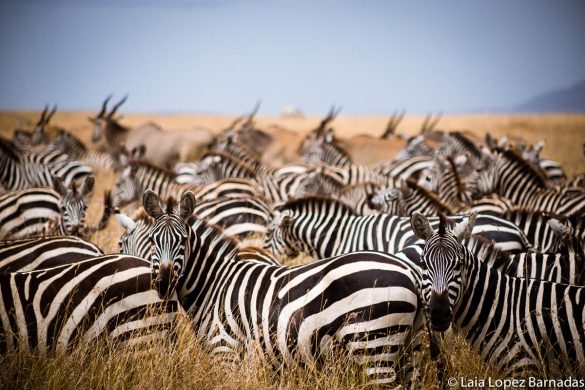 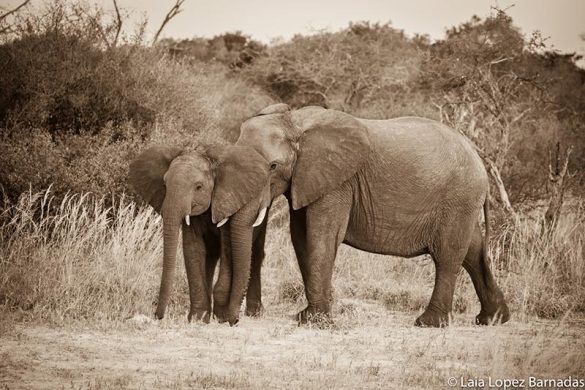 You need to know what our objective is and what we want to achieve and, based on this, we have to decide which gear to bring to achieve these results. Believe me, running lens-laden after the chimpanzees through the forests in Rwanda was tremendously exhausting, and I only got one good shot.

Well, literally we had to climb slopes, climb on all four holding onto the branches of the trees so as not to fall. If I had known this beforehand I would not have carried my backpack, it would have been much lighter and I would have enjoyed the experience much more.

Wildlife can be unpredictable

When you are faced with unpredictable subjects, many move very quickly, run, climb, jump, hide, lie down in the weeds, you do not know exactly what will happen. The light can vary greatly in seconds depending on where the animal moves, and each gesture you make can be converted into a super photograph.

On safaris, always be prepared with the camera in your hands. Focus only on the animal, there is no room for other thoughts. Let’s say it is a kind of meditation. If you lose a second of attention, you can miss something wonderful. 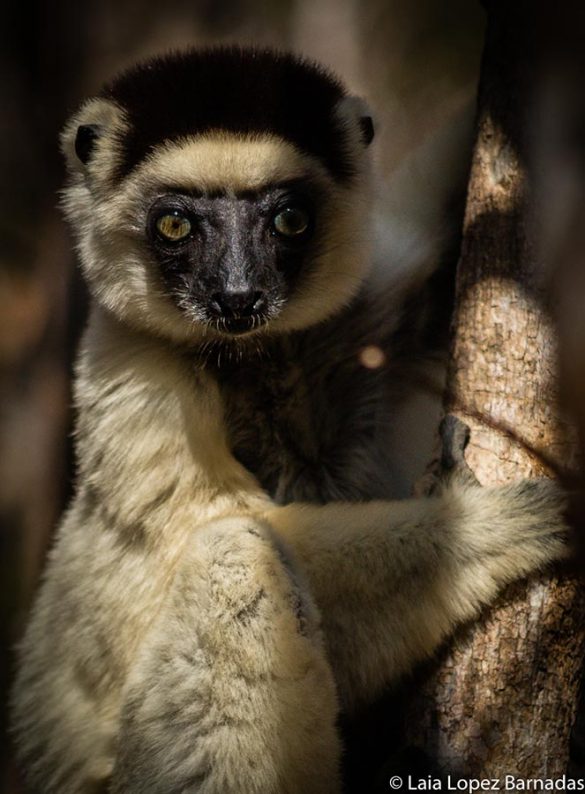 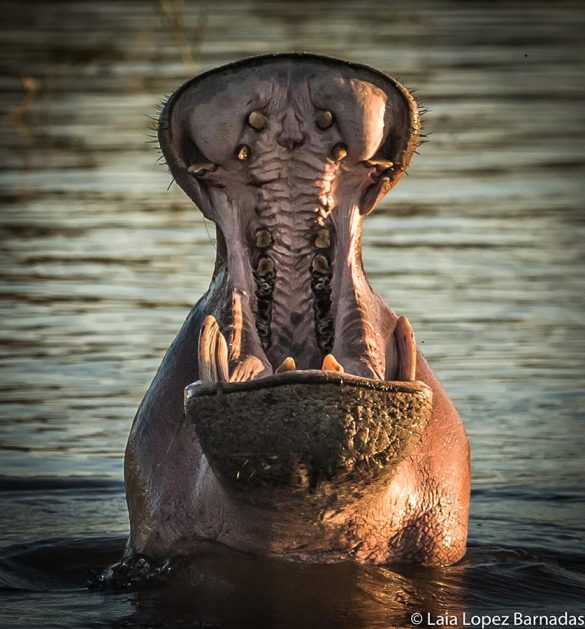 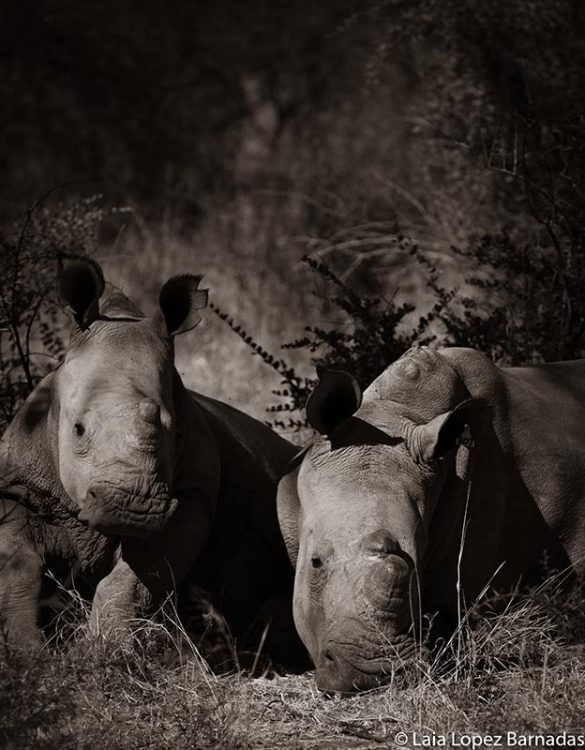 What gear should you take for wildlife photography

DSRL are the best for shooting wildlife photography for several reasons:

One of the keys to making the photo shoot a success is the memory card. For your camera to be able to cope well with the multi-shot function, use a high-speed memory card I use the Sandisk of 170Mb and 256GB to ensure memory (shooting in RAW format) there is a higher speed of 300MB … but the price is very expensive.

This sounds like an obvious one but there is nothing worse than hiking into the jungle and getting ready to take that winning shot and your camera dies. Put this on your checklist!

Use wide-angle for wildlife photography

Wide-angle photography is commonly used for wildlife photography, especially for combining landscape with animal action. This allows us to capture the complete story collecting much of what the human eye sees at the time. The wide-angle lens provides a large amount of light to enable us to shoot wildlife with the vivid sunset backdrops on the Kenyan savannahs.

HOW TO PHOTOGRAPH MOUNTAIN GORILLAS

Animal photography is one of my favourites, along with portraiture. After all, it is about photographing souls, living beings in action.

When asked what the best animal photographic experience has been, I do not hesitate for a second: Mountain Gorillas in Congo (DRC). At this point I have photographed quite a few beautiful creatures: lemurs in Madagascar, the big 5 in Africa, whale sharks in Djibouti, chimpanzees in Cameroon, aquatic mammals and the white shark among many others … but the one that struck me the most was the gorillas. 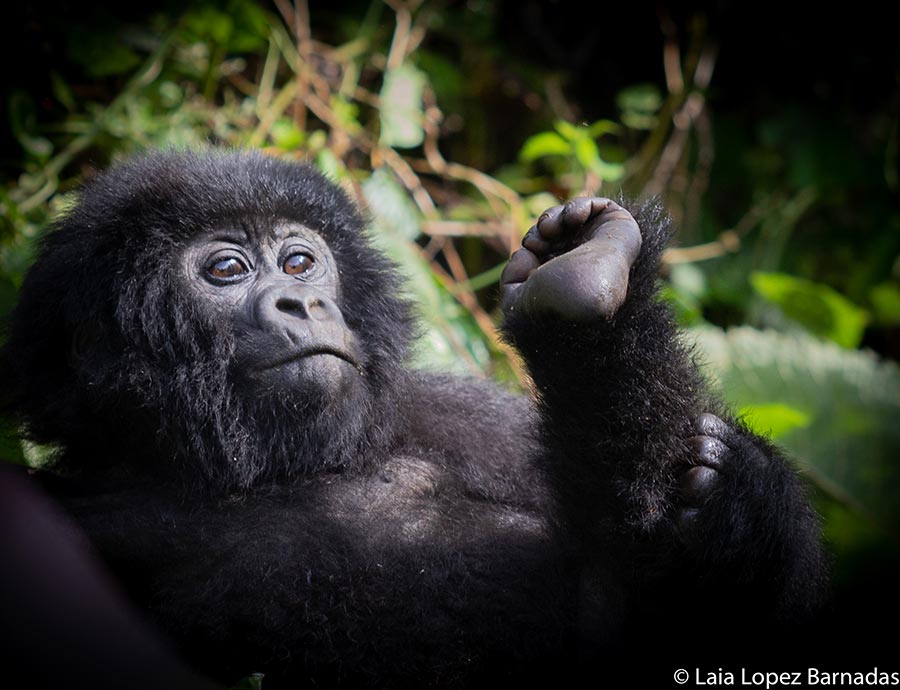 Watch the behaviour of the gorillas

Meeting face to face with mountain gorillas can be one of the most overwhelming experiences in the world of safaris. The encounter with the jungle beast is only a few meters away, enough for it to discharge and kill a human in two seconds, but they are actually quite calm animals, even lazy I would say. You are stepping same ground than them, you are surrounded by them.

There are some behaviour rules very basic and quite logical to face them, such as not making sudden or rapid movements, walking slowly, speaking in a low tone, and if you approach quickly, it is best to kneel and lower your head as an act. of submission, HE is the boss. Observing the mountain gorillas in their area is an amazing spectacle; you can observe the dynamics between them, the hierarchy and most moving of all, the gorilla mothers and their babies, since they live in family units of between 30 and 40 members approx.

For the gorillas’ safety of not being infected by human diseases, it is only authorised to spend an hour with them, always keeping a prudential distance and wearing a mask. It is a mesmerising hour, because you cannot stop observing them.

They pretend to ignore you, from time to time they cross their gaze with yours, and that is when you realise that the differences between humans and them is minimal. Their eyes speak as the human gaze does, with the movements of the lips you know if they are smiling, worried or angry, the gestures of the hands are almost identical to ours, we share 98% of DNA. 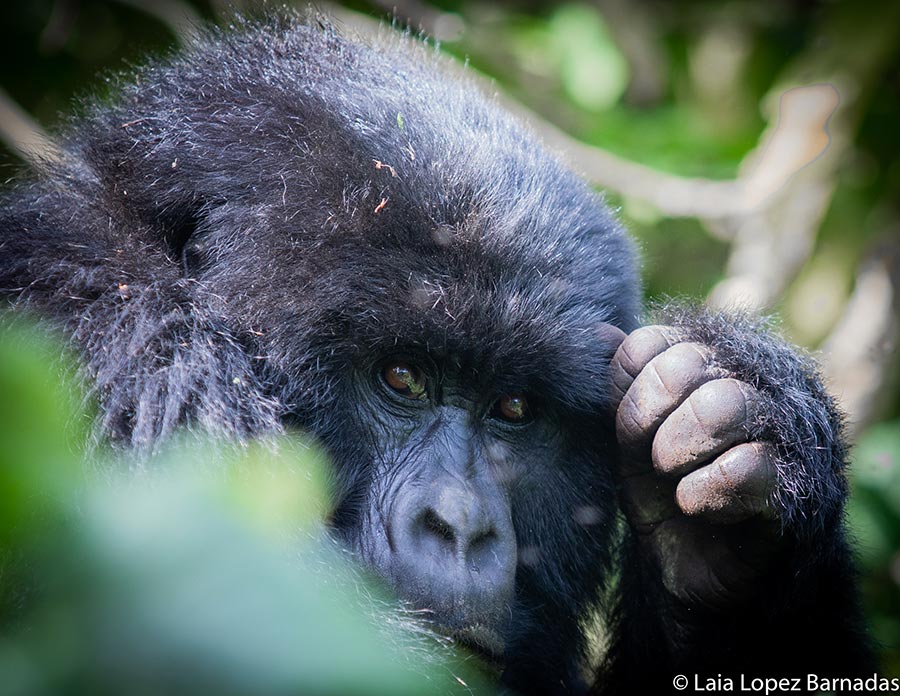 Capture the details of the gorillas

It is relatively easy to take pictures of gorillas if you have a good zoom lens (70-200 or 18-300mm). You can really make beautiful portraits with details of their faces, their hands when they are eating, and when they are with family like moms with their cubs.

Gorillas live in the jungle, this means that it is not an open field; you will always find trees, branches, bushes in the middle so a tele zoom is important in these cases, to focus on the animal and zoom in on it. You could use the wide angle to have more action perspective, but I do not use it as I really like the portrait shot getting the detail of facial expressions. However, this is already a very personal topic; after all, photography is art, that is, an expression of yourself through photography. 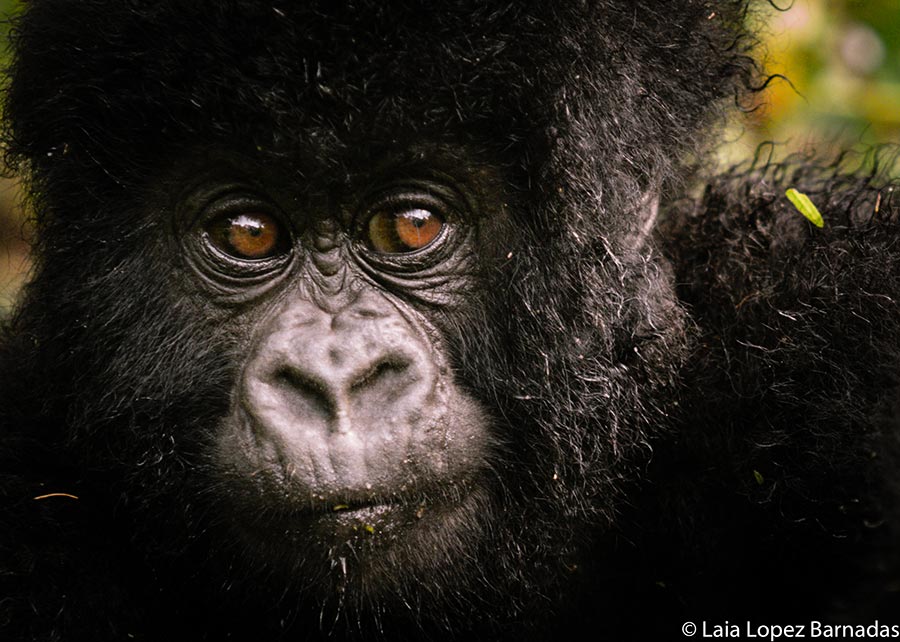 There is a lot of action in the group: eating, playing, fighting, cleaning each other, rolling on the floor, hitting the chest… it’s endless. So choose the position well, look around you what is happening and position yourself in a way that you can get it. You cannot move very fast right now, and there is not much margin or time.

A great tip is to follow the rangers lead as they know how to find other gorillas in the group and thus you will be able to make a wide photographic session of several different gorillas. Rangers are very knowledgeable about gorillas; they know how their behaviour works, where they move, what they like … so it is important that you let them guide you. It worked for me personally, and I was able to take one of the best photos of my life. 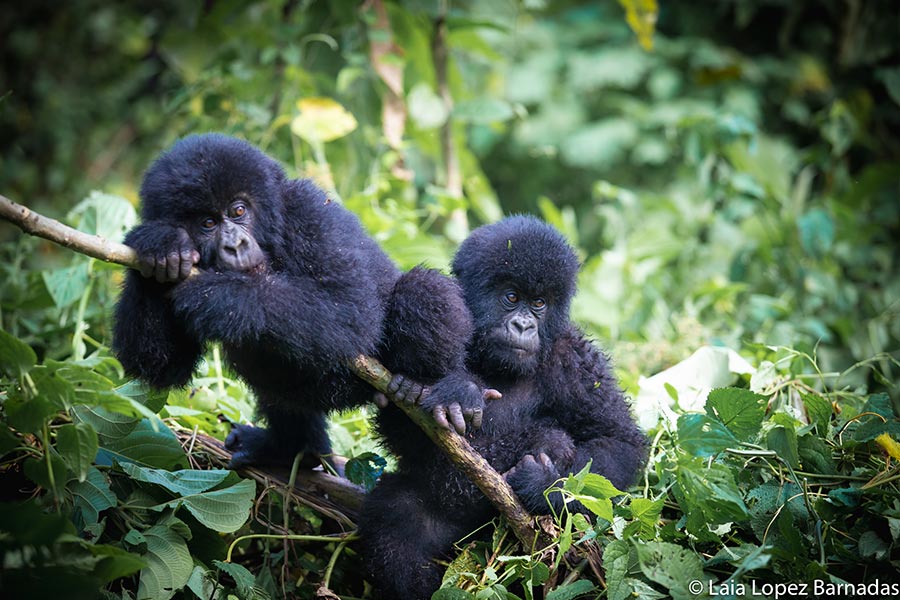 There are two moments when my legs really trembled whilst trying to capture the perfect shot of mountain gorillas, but for very different reasons.

The first was when just behind us the Head of the family appeared, a silver back. It is the clear image of what alpha male means; he is imposing, majestic, elegant, strong and gorgeous. His sudden appearance left us breathless, holding my breath up to my camera and I started shooting, without thinking, hardly breathing. He began to walk heading towards where we were between curious and indifferent, he glancing at us and sat down for the breakfast ritual. While keeping his an eye on us, I had a silverback less than ten feet away, good reason to feel shivers. 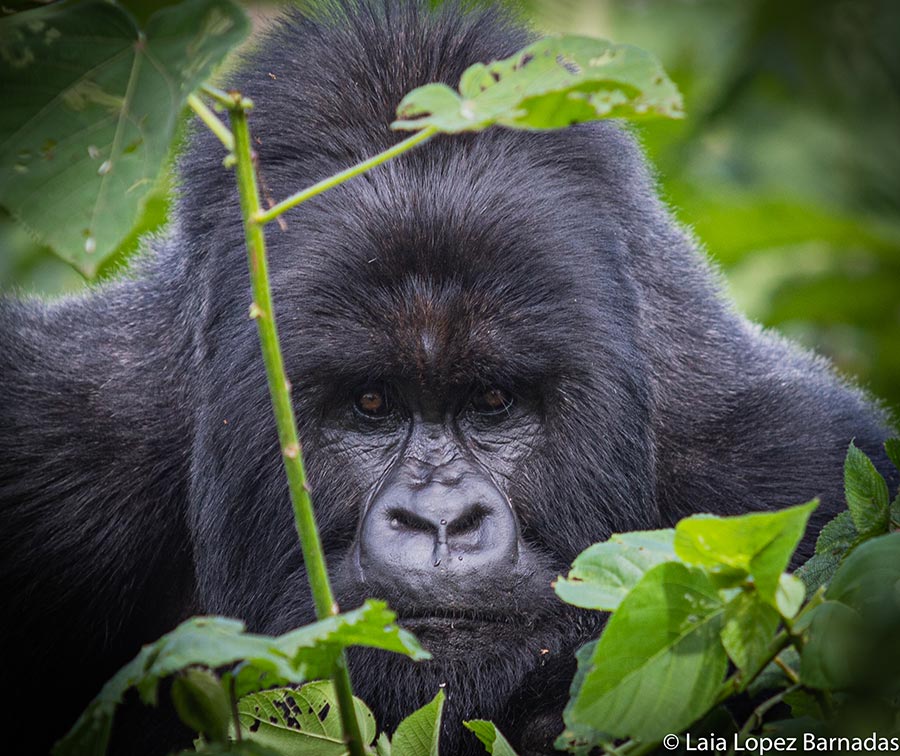 The second moment was when a group of three babies began to play with each other in front of us; I suppose it was a way of looking around, of attracting our attention because they did not stop making mischief and looking at us as if to say: “look at what I am doing human!” One of them got so close that he almost touched my camera with his chubby little fingers, until Mama Gorilla appeared, put the baby on her back and they walked away. 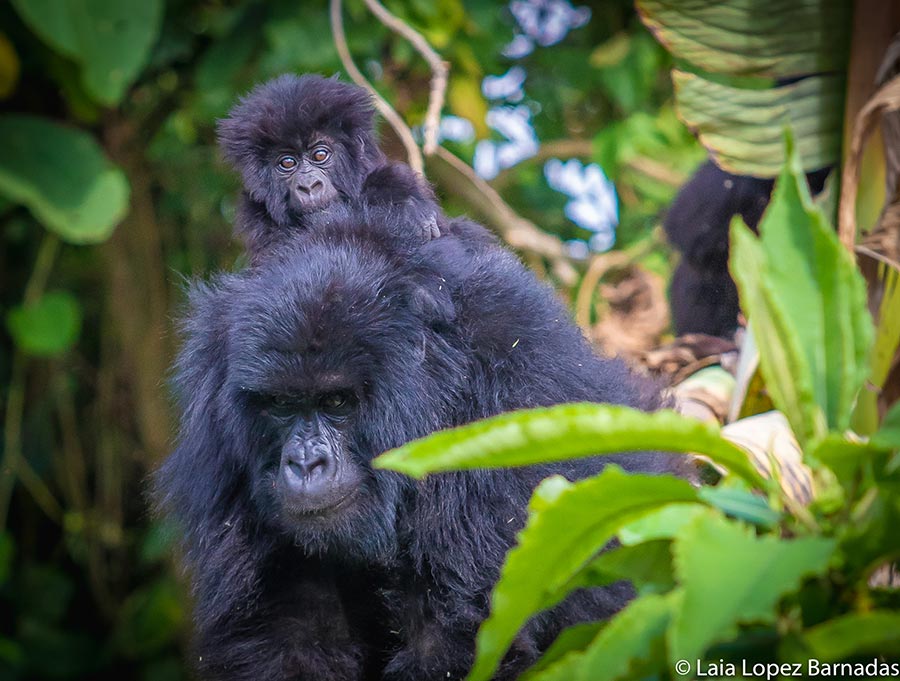 Wild Photography is perhaps one of the most complicated but at the same time compensatory type of photography. It can be very disappointing if the animal is not predisposed to make your pleasures, or as simple as the ambient light is not enough. With the lack of light and the moving animal, what you can get is many blurry photos.

Once you get something amazing it makes up for all those long hours of waiting, it is totally rewarding. Even if it is only one pic. Just enjoy the journey and the pic will come up! 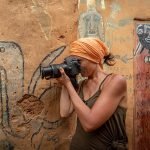 Laia López was born in Barcelona and had her first camera in her hands at 11 years old. She was inspired by her grandma who was a great traveller and photography addicted. She avidly listened to her grandma’s tales as a kid, about the wonderful things to see in the world. So Laia followed in her footsteps and now loves the combination of travel and photography.

“When I’m holding my camera on my hands in a complete new place for me is when I feel myself completely fulfilled. I just love the click sound…”